A galvanometer is a device that is used to detect small electric current or measure its magnitude. The current and its intensity is usually indicated by a magnetic needle’s movement or that of a coil in a magnetic field that is an important part of a galvanometer.

What is a Moving Coil Galvanometer?

A moving coil galvanometer is an instrument which is used to measure electric currents. It is a sensitive electromagnetic device which can measure low currents even of the order of a few microamperes.

A current-carrying coil when placed in an external magnetic field experiences magnetic torque. The angle through which the coil is deflected due to the effect of the magnetic torque is proportional to the magnitude of current in the coil.

The moving coil galvanometer is made up of a rectangular coil that has many turns and it is usually made of thinly insulated or fine copper wire that is wounded on a metallic frame. The coil is free to rotate about a fixed axis. A phosphor-bronze strip that is connected to a movable torsion head is used to suspend the coil in a uniform radial magnetic field.

Essential properties of the material used for suspension of the coil are conductivity and a low value of the torsional constant. A cylindrical soft iron core is symmetrically positioned inside the coil to improve the strength of the magnetic field and to make the field radial. The lower part of the coil is attached to a phosphor-bronze spring having a small number of turns. The other end of the spring is connected to binding screws.

The spring is used to produce a counter torque which balances the magnetic torque and hence helps in producing a steady angular deflection. A plane mirror which is attached to the suspension wire, along with a lamp and scale arrangement, is used to measure the deflection of the coil. Zero-point of the scale is at the centre. 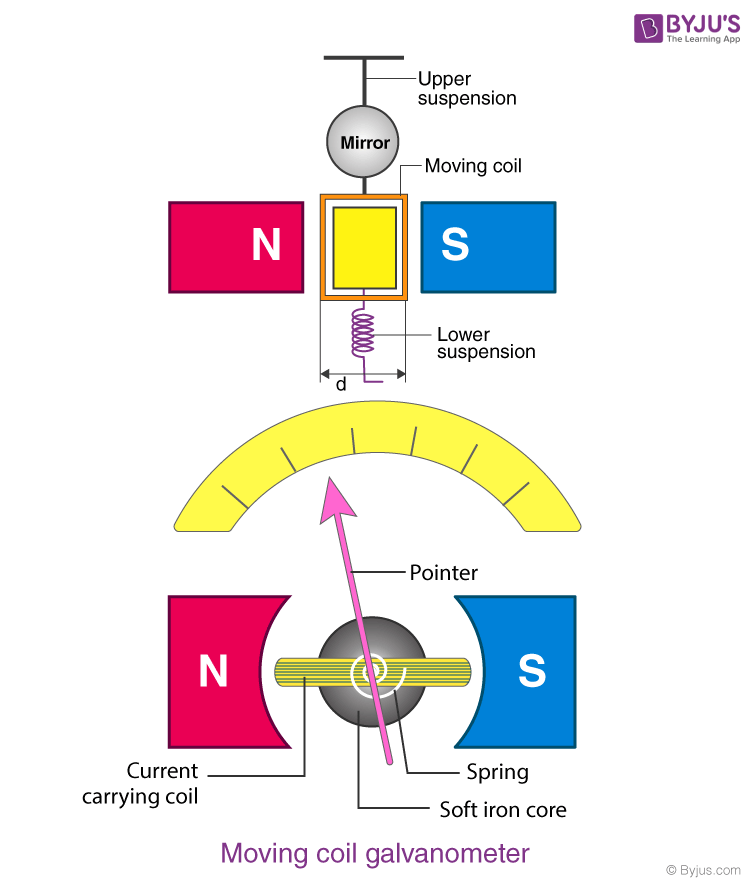 Let a current I flow through the rectangular coil of n number of turns and a cross-sectional area A. When this coil is placed in a uniform radial magnetic field B, the coil experiences a torque τ. 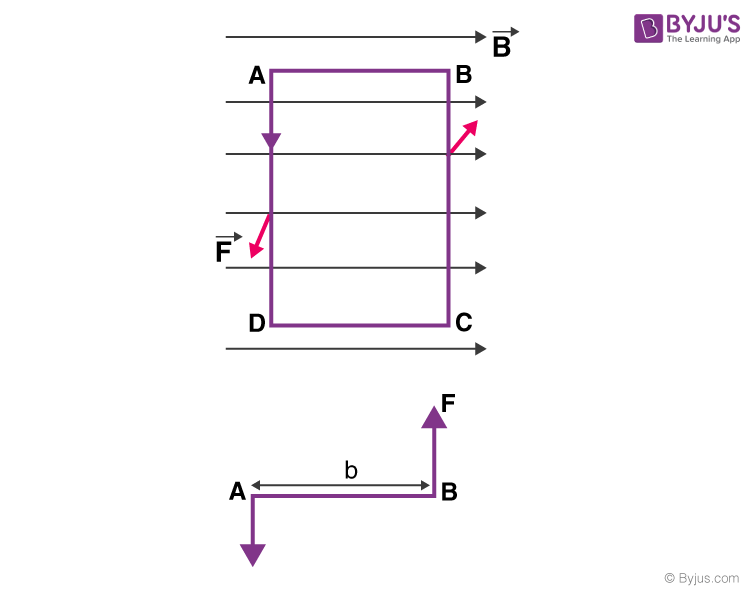 Using Fleming’s left-hand rule we can determine that the forces on AD and BC are in opposite direction to each other. When equal and opposite forces F called couple acts on the coil, it produces a torque. This torque causes the coil to deflect.

Substituting the value of F we already know,

Where lx b is the area A of the coil,

The magnetic torque thus produced causes the coil to rotate, and the phosphor bronze strip twists. In turn, the spring S attached to the coil produces a counter torque or restoring torque kθ which results in a steady angular deflection.

Here k is called the torsional constant of the spring (restoring couple per unit twist). The deflection or twist θ is measured as the value indicated on a scale by a pointer which is connected to the suspension wire.

The quantity nAB / k is a constant for a given galvanometer. Hence it is understood that the deflection that occurs the galvanometer is directly proportional to the current that flows through it.

Solved question: What is the purpose of introducing a cylindrical soft iron core inside the moving coil galvanometer?

The sensitivity of a galvanometer is higher if the instrument shows larger deflection for a small value of current. Sensitivity is of two types, namely current sensitivity and voltage sensitivity.

The deflection θ per unit voltage is known as Voltage sensitivity θ/V. Dividing both sides by V in the equation θ= (nAB / k)I;

R stands for the effective resistance in the circuit.

Figure of Merit of a Galvanometer

It is the ratio of the full-scale deflection current and the number of graduations on the scale of the instrument. It also the reciprocal of the current sensitivity of a galvanometer.

Factors Affecting Sensitivity Of A Galvanometer

a) Number of turns in the coil

b) Area of the coil

d) The magnitude of couple per unit twist k/nAB

Solved Question: Increase in current sensitivity results in an increase in voltage sensitivity of a moving coil galvanometer. Yes or no? Justify your answer.

The moving coil galvanometer is a highly sensitive instrument due to which it can be used to detect the presence of current in any given circuit. If a galvanometer is a connected in a Wheatstone’s bridge circuit, the pointer in the galvanometer shows null deflection, i.e no current flows through the device. The pointer deflects to the left or right depending on the direction of the current.

The galvanometer can be used to measure:

a) the value of current in the circuit by connecting it in parallel to low resistance.

b) the voltage by connecting it in series with high resistance.

Conversion Of Galvanometer To Ammeter

In the given circuit

RG – Resistance of the galvanometer

I – Total current passing through the circuit

The value of S can be obtained using the above equation.

Conversion Of Galvanometer To Voltmeter

A galvanometer is converted into a voltmeter by connecting it in series with high resistance. A suitable high resistance is chosen depending on the range of the voltmeter. 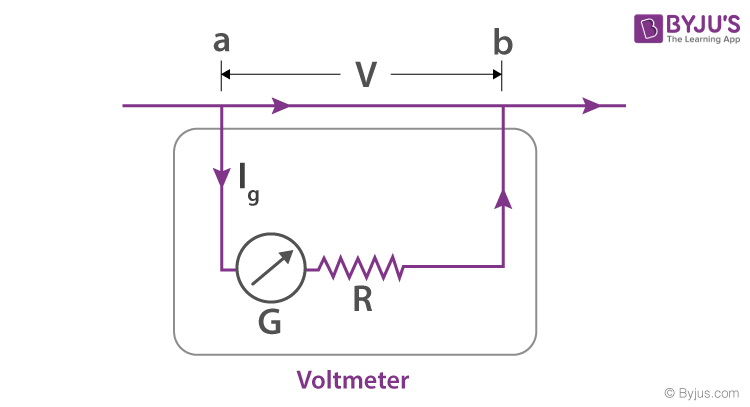 In the given circuit

RG = Resistance of the galvanometer

I = Total current passing through the circuit

IG = Total current passing through the galvanometer which corresponds to a full-scale deflection.

V = Voltage drop across the series connection of galvanometer and high resistance.

When current IG passes through the series combination of the galvanometer and the high resistance R; the voltage drop across the branch ab is given by

The value of R can be obtained using the above equation.

Substituting the given values, we get I= 100.1mA

Solved Question: A galvanometer coil of 40Ω resistance shows full range deflection for a current of 4mA. How can this galvanometer be converted into a voltmeter of range 0-12V?

Advantages And Disadvantages Of A Moving Coil Galvanometer 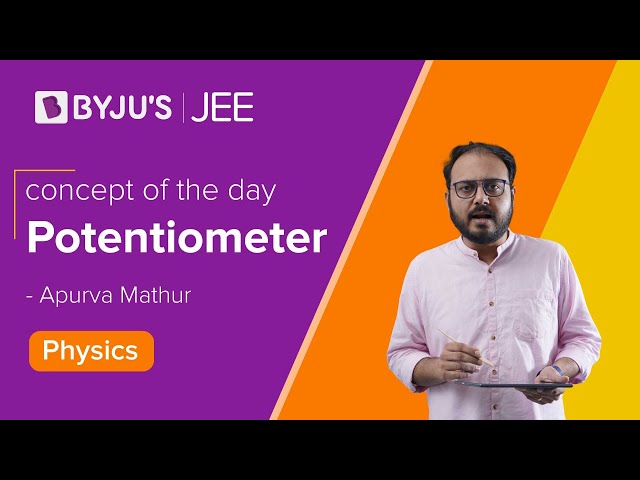 What is the use of a galvanometer?

A galvanometer is used to measure the current and find the direction of the current. It can also measure voltage.

Mention the working principle of a moving coil galvanometer.

The working principle of a moving coil galvanometer is when a current-carrying coil is placed in a magnetic field, it will experience a torque.

Name the scientist who devised the galvanometer.

Johann Schweigger devised the earliest form of the electromagnetic galvanometer.

How is a galvanometer connected to a circuit?

A galvanometer can be used as an ammeter or voltmeter, so it can be connected in series or parallel.

Test Your Knowledge On Galvanometer!
Q5