What is Alternating Current?

An alternating current can be defined as a current that changes its magnitude and polarity at regular intervals of time. It can also be defined as an electrical current that repeatedly changes or reverses its direction opposite to that of Direct Current or DC which always flows in a single direction as shown below.

From the graph, we can see that the charged particles in AC tend to start moving from zero. It increases to a maximum and then decreases back to zero completing one positive cycle. The particles then reverse their direction and reach the maximum in the opposite direction after which AC again returns to the original value completing a negative cycle. The same cycle is repeated again and again.

Alternating current can be produced or generated by using devices that are known as alternators. However, alternating current can also be produced by different methods where many circuits are used. One of the most common or simple ways of generating AC is by using a basic single coil AC generator which consists of two-pole magnets and a single loop of wire having a rectangular shape.

In this setup, the AC generator follows Faraday’s principle of electromagnetic induction where it converts mechanical energy into electrical energy.

Meanwhile, AC is supplied to pieces of equipment using 3 wires. They are as follows;

AC is used mostly in homes and offices mainly because the generating and transporting of AC across long distances is a lot easier. Meanwhile, AC can be converted to and from high voltages easily using transformers. AC is also capable of powering electric motors that further convert electrical energy into mechanical energy. Due to this AC also finds its use in many large appliances like refrigerators, dishwashers and many other appliances.

Before we learn more about this topic, let us quickly understand a few key terms.

The normal waveform of AC in most of the circuits are sinusoidal in nature in which the positive half period corresponds with the positive direction of the current and vice-versa. In addition, a triangular or square wave can also be used to represent the alternating current waveform.

Since, both the cycles do some work the average value is obtained by avoiding the signs. Therefore, the average value of alternating quantities of sinusoidal waves can be considered by taking the positive cycle only.

RMS value is defined as the square root of means of squares of instantaneous values. It can also be described as the amount of AC power that generates the same heating effect as an equivalent DC power.

The phasor diagram is used to determine the phase relationships between two or more sine waves propagating with the same frequency. Here, we use the terms “lead”, “lag” and also “in-phase”, “out-of-phase” to indicate the relation between one waveform with the other.

Phasor diagrams will be of the form: 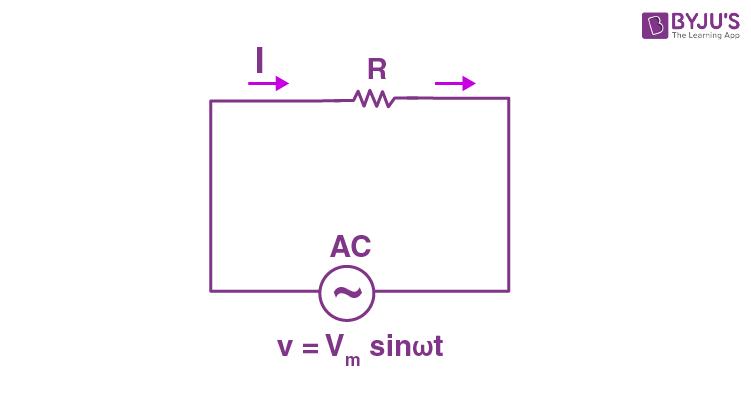 Let the supply voltage be,

The instantaneous value of current flowing through the given circuit is,

Then, the instantaneous value of current will be,

Hence, in a pure resistive ac circuit, the current is in phase with the voltage. 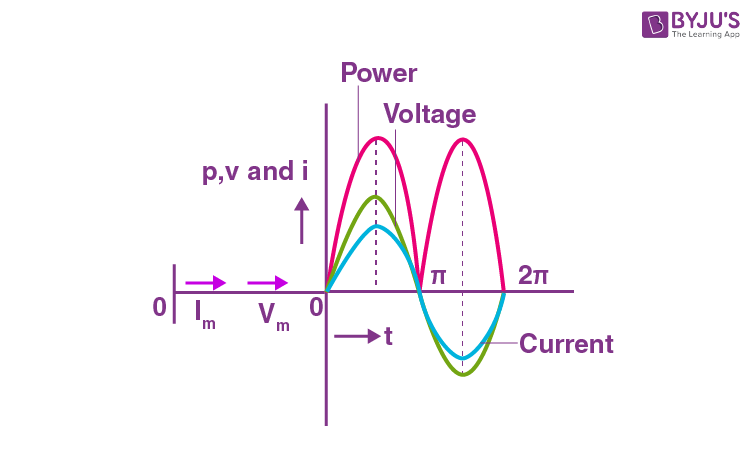 This type of circuit contains only inductance. There will not be any effect of resistance and capacitance in this circuit. Here, the current will lag behind the voltage by an angle of 900.

The circuit will be, 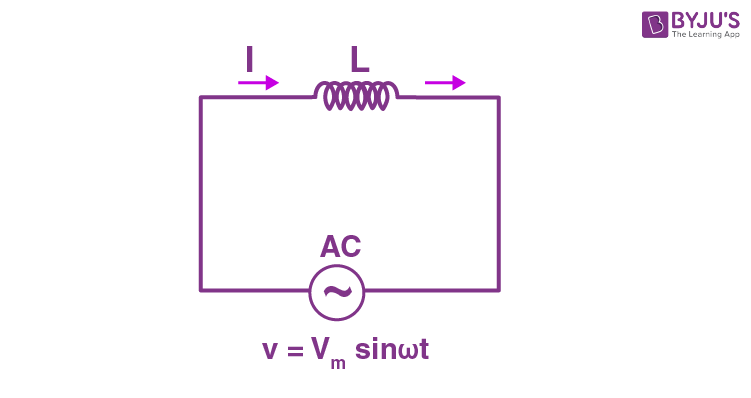 Let the voltage applied to the circuit be,

The emf induced in the inductor will be,

This emf induced in a circuit is equal and opposite to applied voltage.

Integrating both sides, we get,

This implies that the current in pure inductive ac circuits lags the voltage by 900. 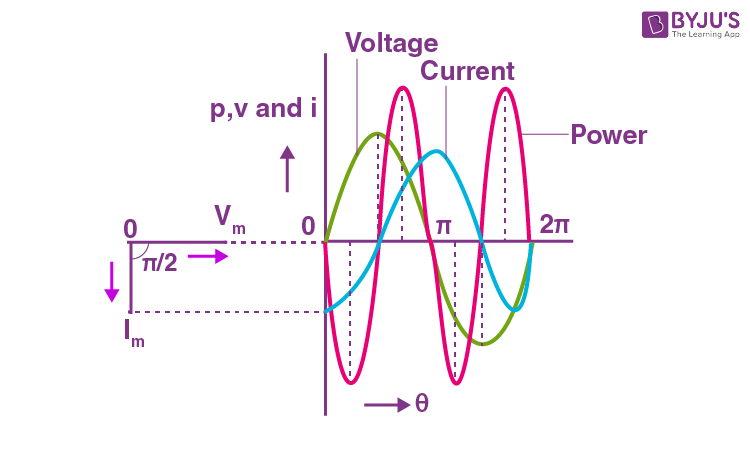 This type of circuit includes a pure capacitor only. It will not affect the properties of resistance and inductance. The capacitor will store electric power in the electric field. This is known as capacitance.

The circuit will be, 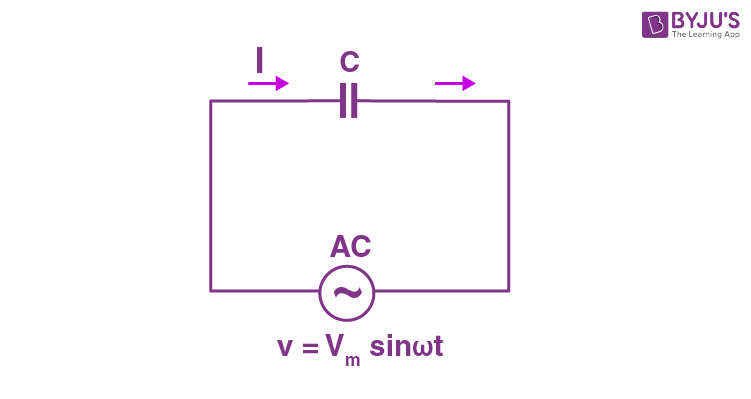 Let the voltage applied to the circuit be,

Charge of the capacitor is,

Then, current flow through the circuit will be,

Substituting the value of q in the above equation we get,

Where XC = 1/C which is capacitive inductance.

Then, the maximum value of current,

Substituting the value of Im in (4) we get,

This implies that the current flowing through the capacitor leads the voltage by 900. 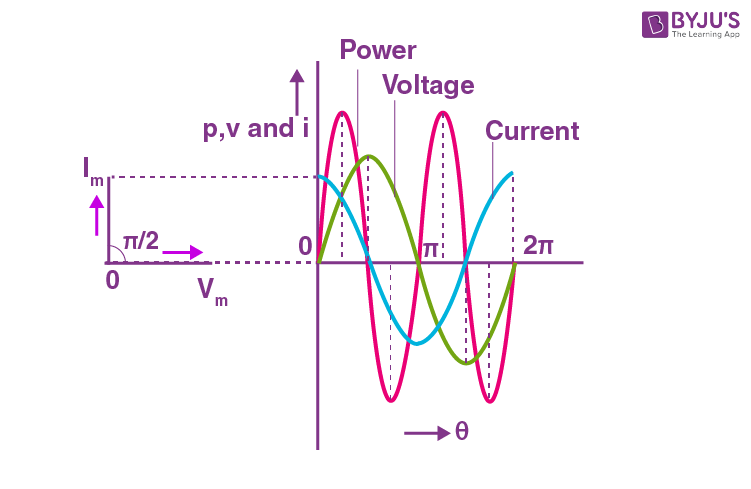 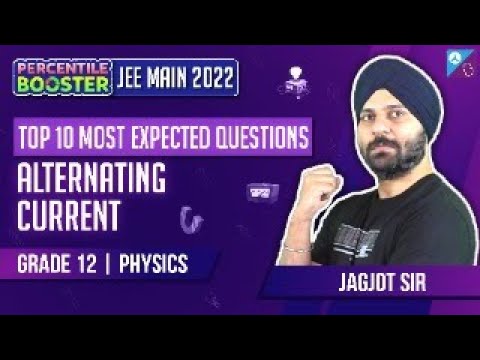 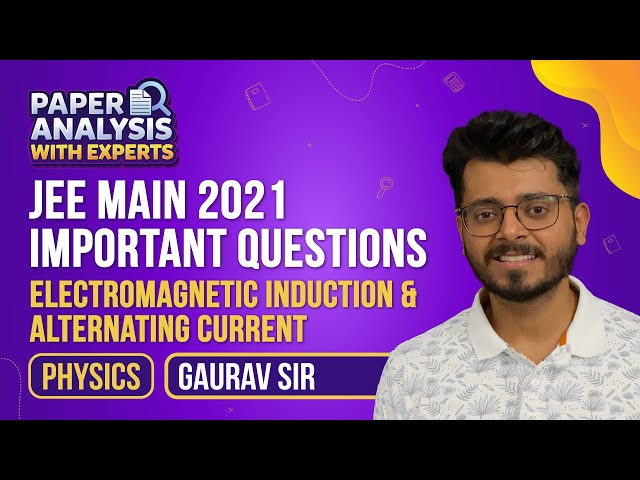 Define the period of alternating current.

The period of Alternating current is the time taken by it to complete one cycle.

Define the frequency of the alternating current.

The frequency of AC is the number of cycles completed by the alternating current in one second.

Give one method of generating sinusoidal alternating current.

A sinusoidal AC can be generated by rotating a coil in a uniform magnetic field at a constant rate.

What is the RMS value of an AC?

The RMS value of an AC is the square root of the mean of the squares of the instantaneous values taken over a complete cycle.

What are the advantages of AC over DC current?

Alternating current can be stepped up or stepped down using a transformer.
Using electronic supply units, AC can be converted into DC.
Alternating current devices are more durable since power dissipation is less.
Transmission of electrical power is more efficient and economical in the form of AC.

Period of alternating is the time taken by it to complete one cycle.

Define frequency of an alternating current.

The frequency of AC is the number of cycles completed by the AC in one second.

What is the mean value of an AC?

Mean value of AC is the mean or average of the instantaneous values of AC taken over half a cycle.