Working Principle Of An Electrical Fuse

To understand the working principle behind an electrical fuse, two critical concepts should be kept in mind

Electric current can flow through a conductor only when the circuit formed is complete. If there is a break in the loop, electric charges cannot flow through. This is also how switches operate. For example, when you put on the light switches at home, the lights come on because you have just completed the circuit allowing charges from the power source to flow through and power your lights.

When current passes through a conductor, the different electrical components of the circuit like the devices attached or even the wire itself, offer resistance to the current flow. The work done to overcome this resistance presents itself in the form of heat. This is a simple explanation of the “heating effect” of current.

The primary use of an electric fuse is to protect electrical equipment from excessive current and to prevent short circuits or mismatched loads. Electrical fuses play the role of miniature circuit breakers. Apart from protecting equipment, they are also used as safety measures to prevent any safety hazards to humans.

In the field of electrical engineering, a fuse is a device that provides overcurrent protection to the functional electrical circuit. Here, we have listed a few major functions of the fuse.

The markings on the fuse carry information such as the Ampere rating, voltage rating, and interruption rating.

Different types of fuses are available in the market, and they are classified on the basis of different aspects. But mainly, fuses can be divided into two categories based on the input supply as follows:

Given below is a flowchart of further classification of fuse: 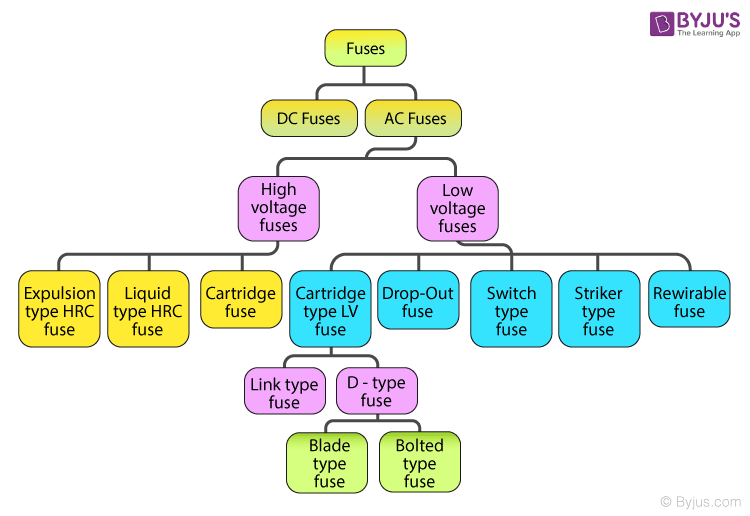 You may want to watch the following video on how electricity flows through a circuit and understand what resists the flow of current. What is an electrical fuse?

An electrical fuse is a safety device that operates to provide protection against the overflow of current in an electrical circuit.

What are the types of electrical fuse

Fuses are of two types:

State true or false: Electrical fuse acts as a barrier between the electric circuit and the human body.

The markings on the fuse carry which type of information?

The markings on the fuse carry information such as the Ampere rating, voltage rating, and interruption rating.

Functions of the fuse are:

Hope you have understood in detail the working principle of an electrical fuse along with the function and types of the fuse. Stay tuned with BYJU’S for more interesting information.

Test Your Knowledge On Working Principle Of An Electrical Fuse!
Q5