Working Of An Electric Bell

So, in an electric bell, an electromagnet forms an important part along with Armature, Spring, Armature rod, Hammer and a Gong.

The image below shows the internal mechanism of an electric bell. 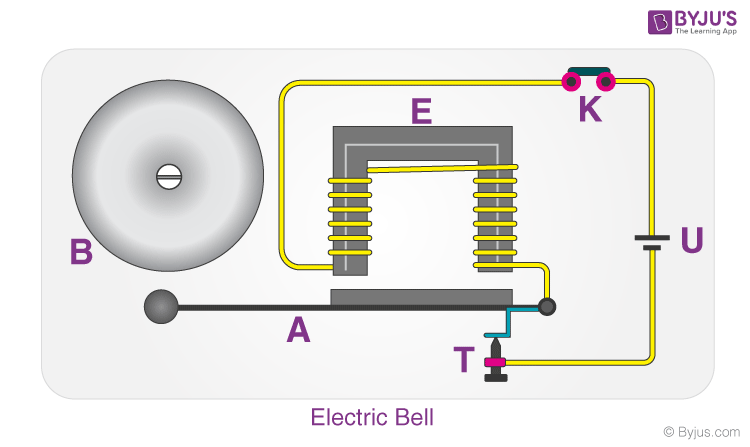 So once the setup is completed, when the switch is pressed, the circuit loop is complete which causes the current to flow through the circuit. The arm which strikes the gong is connected to spring at one end and an iron ball at the other end. This is called a hammer or a striker. The arm is attached to an iron strip which is attracted to the electromagnet when the circuit is complete and the current flowing through it.

Why does this happen? It’s mainly because the magnetic field created by the electromagnet attracts the iron strip towards it when the circuit is complete. This is the moment when you hear the ringing sound since the hammer keeps hitting the gong. Meanwhile, at its rest position, the hammer is held away from the gong on account of the spring attached to its arm. This is an anchored arm.

Process of the working of an electric bell

Now that you have an understanding of the important parts in an electric bell, the step-by-step process of the working of the electric bell is described below:

Stay tuned with BYJU’S to learn more about working of an electric bell, magnetic field, and much more.

What is an electric bell?

The electric bell is a simple circuit that triggers a sound on the completion of circuit by pressing the button. It is this simplicity that makes doorbell such a marvel. The simple devices in the doorbell put the scientific principle of electromagnetism into action in a useful way.

How are magnets useful?

Magnets have been proving its worth every day with its incredible function by making the most strenuous tasks easier. With the various uses of magnets in daily life, we can do heavy lifting which is not humanly possible to do every day. Magnets play an important role in various devices which can be a small toy or a heavy 100-ton device to pick up heavy metals.

What are the properties of a magnet?

A magnet has three properties and that are attractive prosperity, repulsive property and directive property.

Write some uses of permanent magnets.