Batteries and cells are important inventions that have made a lot of our everyday tasks and life much easier. They are practically used in most of the portable electronic devices that we use today. Besides, we can say that we cannot imagine a world without them. In this article, let us know more about the cells and their working principle in detail.

A cell or an electrochemical cell is a device that is capable of obtaining electrical energy from chemical reactions or vice versa. You have definitely seen a cell, the small AAA or AA batteries we use in our remotes.

An electric battery is a device made up of two or more cells that make use of the chemical energy stored in the chemicals and converts it into electrical energy. A battery is used to provide a continuous steady current source by way of providing constant EMF or Electromotive force to an electrical circuit or a machine.

Redox reactions, reduction and oxidation occur simultaneously and this powers the battery. Cations are reduced (it gains electrons) at the cathode during charging, while anions are oxidised (it loses electrons) at the anode during charging. During discharge, the process is reversed. The electrodes do not touch each other but are electrically connected by the electrolyte. 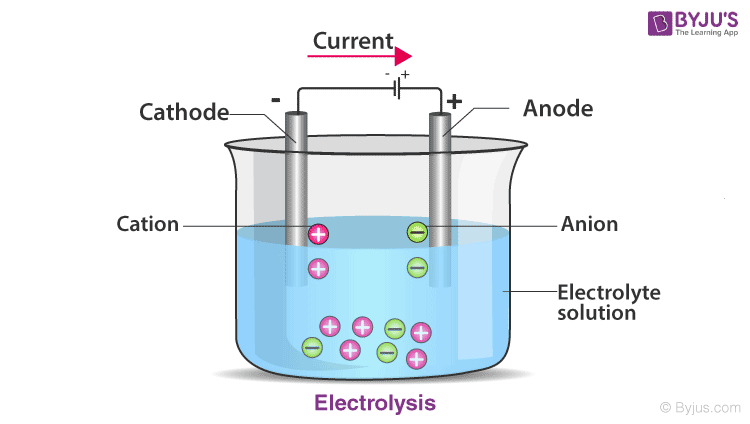 What is an Electromotive Force (EMF) of a Cell?

The below video explains the relation between the EMF and voltage: The voltage drop experienced due to internal resistance can be denoted as,

In this article, you learnt about a cell, battery, the electromotive force (emf) and internal resistance. If you want to learn more about EMF and cells, download BYJU’S the Learning App.

What is meant by electric potential?

Electric potential is the quantity of work required to displace a unit charge from a reference point to a specific point against an electric field.

What is the full form of emf?

Electromotive force is the full form of emf.

Electromotive force or emf is equal to the potential terminal variation when no electric current flows.

What is the unit of resistivity?

The unit of resistivity is given as ohm-metre.

What is the reciprocal of resistance?

The reciprocal of resistivity is conductance.
Test your knowledge on Cells Electromotive Force And Internal Resistance
Q5