Refraction Of Light : Law Of Refraction

We know that light is a form of energy and can undergo various phenomena like diffraction, reflection, refraction, interference, and polarisation. Refraction is the phenomenon that takes place due to the bending of light when it travels from one medium to another. In this article, let us briefly understand the laws of refraction.

Refraction of Light is a phenomenon wherein light bends and travels from one transparent substance to another. Let’s understand this concept in-depth with an illustration. So, have you ever observed the bottom of a thick glass slab when a printed paper is kept below it? You will find that the printed matter seems to be raised. Similarly, when a pencil is partly immersed in water in a glass tumbler, it appears to be displaced from its original position at the surface. Did you ever think why does it happen? Why can’t it appear to be at the normal position?

What if the water in the tumbler is replaced by kerosene or turpentine? Will the pencil appear to be displaced to the same extent? No, now the pencil will be displaced to some other extent. The extent of displacement is different for a different medium. This shows that light does not travel in the same direction in all mediums. The direction of propagation of light while travelling obliquely changes from one medium to another. This phenomenon is named as refraction of light. We can define refraction as the phenomenon of bending of light when it passes from one substance to another. Rainbow, mirage are a few real-life examples of refraction. Sunrise and sunset are a results of atmospheric refraction. Let us understand it more clearly by the concept of refraction through a rectangular glass slab. 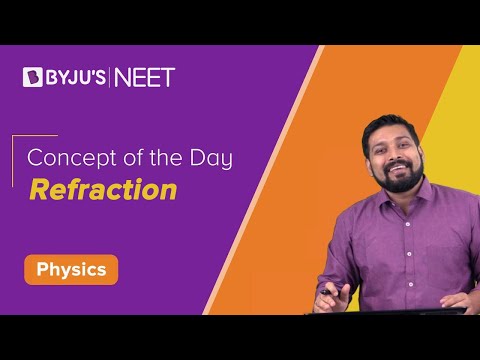 Refraction Through A Rectangular Glass Slab

Let us understand the phenomenon of refraction of light with the help of an activity. 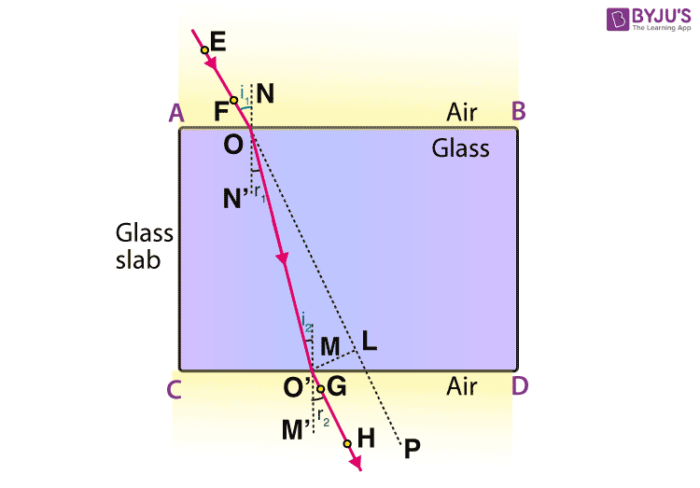 In the above activity, we have observed that light rays change their direction at O and O’ points at the surfaces of two separating transparent media. Make a perpendicular line NN’ to AB at O and another perpendicular line MM’ to CD at O’. At O the light ray enters from a rarer medium to a denser medium i.e. from air to glass. Hence, the light travels towards the normal. While at O’, the ray of light moves from denser to rarer medium. Hence, the light moves away from the normal.

The laws of refraction govern the behaviour of light as they pass through the interface between two media. It is generally known as Snell’s Law. From the above-depicted activity, we can say that the refraction of light follows two laws:

We know that when light passes obliquely from one medium to another, it changes direction in the second medium. The extent to which change in direction takes place in the given set of a medium is termed as refractive index. 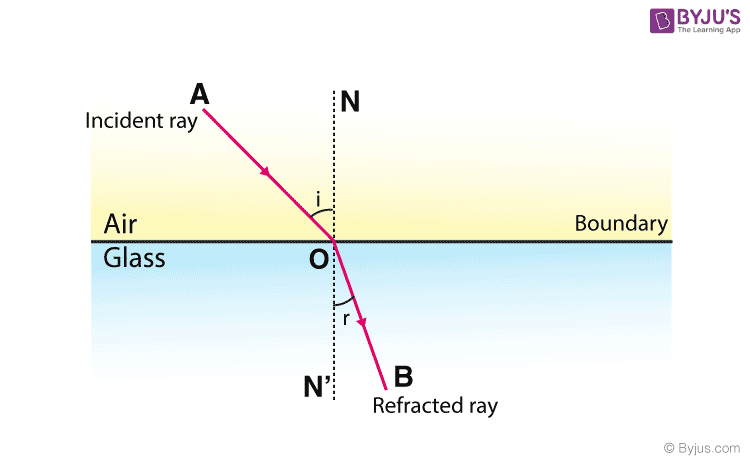 Refraction Of Light
Consider a ray of light passing from medium 1 to medium 2 as shown in fig.

v1= speed of light in medium 1

v2= speed of light in medium 2

The refractive index of medium 2 with respect to 1 can be written as below:

What is the difference between reflection and refraction of light?

Why do the stars twinkle?

As a star’s light penetrates the Earth’s atmosphere, every individual stream of starlight is refracted – caused to change direction, slightly – by the various temperature and density layers in Earth’s atmosphere. You might think of it as the light travelling a zig-zag path to our eyes, instead of the straight path the light would travel if Earth didn’t have an atmosphere. This is the reason why stars twinkle

What is the refractive index?

What is the refractive index of water?

The refractive index of water is 1.333.
Test your Knowledge on Refraction
Q5