Introduction to Stress and Strain

You may have noticed that certain objects can stretch easily, but stretching objects like an iron rod sounds impossible, right? In this article, we will help you understand why few objects are more malleable than others. Mainly, we will be discussing Stress-strain curves because they are useful in understanding the tensile strength of a given material. We shall learn how force applied to a body generates stress. In this article, let us learn about stress and strain definition and relationship between the stress-strain.

In mechanics, stress is defined as a force applied per unit area. It is given by the formula

Stress applied to a material can be of two types. They are:

According to the strain definition, it is defined as the amount of deformation experienced by the body in the direction of force applied, divided by initial dimensions of the body. The relation for deformation in terms of length of a solid is given below.

\(\epsilon\) is the strain due to stress applied
\(\delta l\) is the change in length
L is the original length of the material.

The strain is a dimensionless quantity as it just defines the relative change in shape.

Depending on stress application, strain experienced in a body can be of two types. They are:

When we study solids and their mechanical properties, information regarding their elastic properties is most important. These can be obtained by studying the stress-strain relationships, under different loads, in these materials. 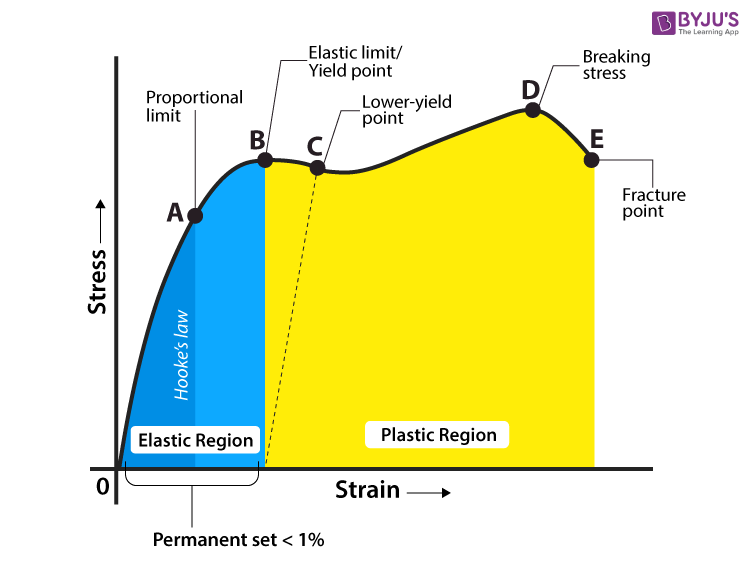 The stress-strain graph has different points or regions as follows:

It is the region in the stress-strain curve that obeys Hooke’s Law. In this limit, the ratio of stress with strain gives us proportionality constant known as young’s modulus. The point OA in the graph is called the proportional limit.

It is a point that represents the maximum stress that a material can endure before failure. Beyond this point, failure occurs.

It is the point in the stress-strain curve at which the failure of the material takes place.

In the 19th-century, while studying springs and elasticity, English scientist Robert Hooke noticed that many materials exhibited a similar property when the stress-strain relationship was studied. There was a linear region where the force required to stretch the material was proportional to the extension of the material. This is known as Hooke’s Law.

Hooke’s Law states that the strain of the material is proportional to the applied stress within the elastic limit of that material.

Also explore the terms related to stress-strain such as:

Have some doubts regarding this topic, download BYJU’S The Learning App and clear your doubts instantly.

Following is the table with Young’s modulus, shear modulus, and bulk modulus for the common materials that we use every day in the life:

What are the SI units for stress and strain?

The SI unit of stress is Newton per square meter. Or we can express the same in terms of Pascal.
1 Pascal = 1 Pa = 1 N.m-2.
While there is no unit for strain. It is a dimensionless quantity. This is because it is the ratio of change of length to the original length, and therefore it is unitless.

What is the use of the stress-strain diagram?

What is the relation between stress and strain?

What are the types of strain?

There are three types of strain and they are:

What is the difference between stress and strain?

Hope you have understood the stress and strain definition. Stay tuned with BYJU’S for more such interesting articles.