What is Electromagnetic Induction?

Electromagnetic Induction was discovered by Michael Faraday in 1831 and James Clerk Maxwell mathematically described it as Faraday’s law of induction.

Electromagnetic Induction is a current produced because of voltage production (electromotive force) due to a changing magnetic field.

Michael Faraday arranged a conducting wire as per the setup given below, attached to a device to measure the voltage across the circuit. When a bar magnet was moved through the coiling, the voltage detector measures the voltage in the circuit. 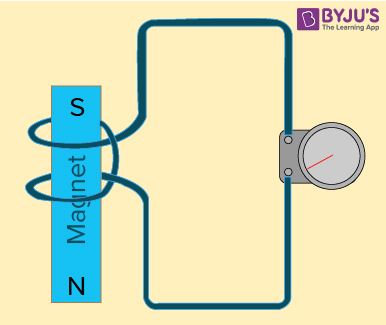 Through his experiment, he discovered that there are certain factors that influence this voltage production. They are:

You may also want to check out these concept related to induction:

Based on his experiments we now have Faraday’s law according to which the amount of voltage induced in a coil is proportional to the number of turns of the coil and the rate of changing magnetic field.

Mathematically, the induced voltage can be given by the following relation:

The significance of this discovery is a way of producing electrical energy in a circuit by using magnetic fields and not just batteries. Everyday machines like motors, generators and transformers work on the principle of electromagnetic induction. Did you know that the principle of electromagnetic induction is also involved in the working of a credit card strip when you swipe it across the card machine? How do you think this works? [Hint: The strip is magnetic]