Latent heat is defined as the heat or energy that is absorbed or released during a phase change of a substance. It could either be from a gas to a liquid or liquid to solid and vice versa. Latent heat is related to a heat property called enthalpy.

However, an important point that we should consider regarding latent heat is that the temperature of the substance remains constant. As far as the mechanism is concerned, latent heat is the work that is needed to overcome the attractive forces that hold molecules and atoms together in a substance.

Let’s take an example. Suppose a solid substance is changing to a liquid, it needs to absorb energy to push the molecules into a wider, more fluid volume. Similarly, when a substance changes from a gas phase to a liquid, their density levels also need to go from lower to a higher level wherein the substance then needs to release or lose energy so that the molecules come closer together. In essence, this energy that is required by a substance to either freeze, melt or boil is said to be latent heat. 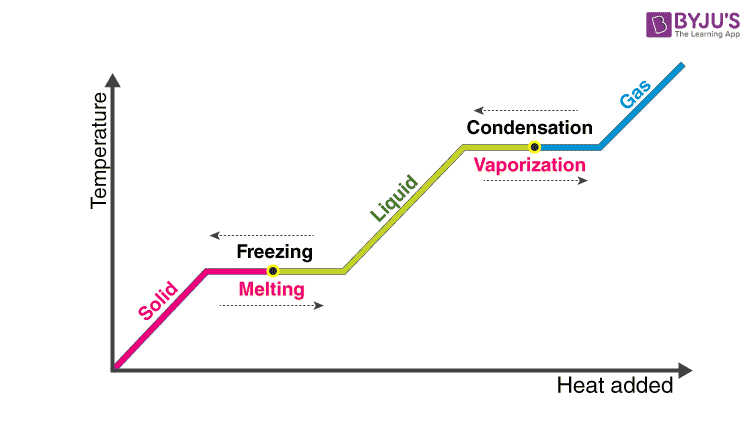 Early Developments of the Concept

English scientific expert Joseph Black presented the idea of latent heat somewhere close to the long periods of 1750 and 1762. Scotch bourbon producers had employed Black to decide the best blend of fuel and water for refining and to examine changes in volume and weight at a steady temperature. Dark applied calorimetry for his investigation and recorded latent heat esteems.

English physicist James Prescott Joule portrayed latent heat as a type of potential vitality. Joule accepted the vitality relied upon the specific design of particles in a substance. Actually, it is the direction of particles inside an atom, their substance holding, and their extremity that influence latent heat.

Lets us discuss some the different types of latent heat that can occur.

Latent heat of fusion is the heat consumed or discharged when matter melts, changing stage from solid to fluid-structure at a consistent temperature.

At the point when the heat of fusion is referenced to a unit of mass, it is typically called the specific heat of fusion, while the molar heat of fusion alludes to the enthalpy change per measure of substance in moles.

The fluid state has higher inward energy than the solid-state. This implies energy must be provided to the solid so as to dissolve it and energy is discharged from a fluid when it solidifies, on the grounds that the particles in the fluid experience more fragile intermolecular force thus have higher potential energy (a sort of bond-separation energy for intermolecular powers).

Latent heat of vaporization is the heat consumed or discharged when matter disintegrates, changing state from fluid to gas state at a consistent temperature.

The heat of vaporization of water is the most elevated known. The heat of vaporization is characterized as the measure of heat expected to transform 1 g of a fluid into a fume, without a change in the temperature of the fluid. This term isn’t in the rundown of definitions given by Weast (1964), so the definition originates from Webster’s New World Dictionary of the American Language (1959). The units are cal/gram. The heat of vaporization is latent heat. Latent originates from the Latin word latere, which intends to lie covered up or hid. Latent heat is the extra heat required to change the condition of a substance from solid to fluid at its softening point, or from fluid to gas at its breaking point after the temperature of the substance has come to both of these focuses.

Note that latent heat is related with no adjustment in temperature, yet a difference in the state. As a result of the high heat of vaporization, the vanishing of water has an articulated cooling impact and buildup has a warming impact.

Although reasonable heat is frequently called latent heat, it is anything but a steady temperature circumstance, nor is a stage change included. Reasonable heat reflects heat move among an item and their environment. The heat can be “detected” as an adjustment in an item’s temperature.

While latent heat of combination and vaporization are utilized in material science and science, meteorologists likewise think about reasonable heat. At the point when latent heat is ingested or discharged, it produces insecurity in the climate, conceivably delivering extreme climate. The change in latent heat adjusts the temperature into contact with hotter or cooler air. Both latent and reasonable heat cause air to move, creating wind and vertical movement of air masses.

Instances of Latent and Sensible Heat

Everyday life is loaded up with instances of latent and reasonable heat:

Bubbling water on a stove happens when warm vitality from the heating component is moved to the pot and thus to the water. At the point when enough vitality is provided, fluid water grows to from water fume and the water bubbles. A gigantic measure of vitality is discharged when water bubbles are formed. Since water has such a high heat of vaporization, it’s anything but difficult to get scorched by steam.

Correspondingly, significant energy must be assimilated to change over fluid water to ice in a cooler. The cooler expels heat energy for permitting the stage progress to happen. Water has a high latent heat of combination, so transforming water into ice requires expulsion of more energy than solidifying fluid oxygen into solid oxygen, per unit gram.

Specific latent heat is characterized as the measure of heat energy (heat, Q) that is consumed or discharged when a body experiences a steady temperature process.

The formula for specific latent heat is:

L is the specific latent heat

Q is the heat retained or discharged

m is the mass of a substance

The most widely recognized kinds of consistent temperature forms are stage changes, for example, liquefying, solidifying, vaporization, or buildup. The energy is viewed as “latent” on the grounds that it is basically covered up inside the atoms until the stage change happens. The most well-known units of specific latent heat are joules per gram (J/g) and kilojoules per kilogram (kJ/kg).

Specific latent heat is an escalated property of issue.

What are the types of latent heat transfer?

What is specific latent heat?

What is an example of latent heat?

The temperature of the boiling water remains 1000C till the last drop evaporates.

Can latent heat be measured using a thermometer?