W. Shockley, J. Barden, and W. Brattain invented the transistor in 1947.  The term ‘transistor’ is derived from the words ‘transfer’ and ‘resistor.’ These words describe the operation of a BJT which is the transfer of an input signal from a low resistance circuit to a high resistance circuit. In this article, let us learn more about the Bipolar Junction Transistor.

What is a Bipolar Junction Transistor (BJT)?

A bipolar junction transistor is a three-terminal semiconductor device that consists of two p-n junctions which are able to amplify or magnify a signal. It is a current controlled device. The three terminals of the BJT are the base, the collector, and the emitter. A signal of a small amplitude applied to the base is available in the amplified form at the collector of the transistor. This is the amplification provided by the BJT. Note that it does require an external source of DC power supply to carry out the amplification process.

BJT is a semiconductor device that is constructed with 3 doped semiconductor Regions i.e. Base, Collector & Emitter separated by 2 p-n Junctions.

Bipolar transistors are manufactured in two types, PNP and NPN, and are available as separate components, usually in large quantities. The prime use or function of this type of transistor is to amplify current. This makes them useful as switches or amplifiers. They have a wide application in electronic devices like mobile phones, televisions, radio transmitters, and industrial control.

There are three operating regions of a bipolar junction transistor:

There are two types of bipolar junction transistors: 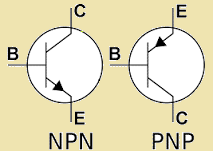 The flow of charge in a Bipolar transistor is due to the diffusion of charge carriers between the two regions belonging to different charge concentrations. Regions of BJT are known as the base, collector, and emitter.

The emitter region is highly doped when compared to other layers. Both collector and base layers have the same charge carrier concentrations. Among these junctions, the base-emitter junction is forward biased, and the base-collector junction is reverse biased. Forward biased means p-doped region has more potential than the n-doped side.

The base-emitter current is controlled by the collector-emitter current. This conclusion is drawn by the current-voltage relation of the base-emitter junction. Collector current has a base region where minority carriers are concentrated.
Transistor models such as the Glenn poon model are responsible for the distribution of the charge which explains the behaviour of a transistor.

Since Bipolar Junction Transistor is a three-terminal device, there are three ways to connect it within an electric circuit while one terminal is the same for both output and input. Every method of connection responds differently to the input signals within a circuit.

Characteristics of different transistor configurations are given in the following table:

BJT was invented by W.H Brattin, Bardeen, and William Shockley.

What are the operating regions of BJT?

The operating regions of BJT are:

What are the applications of BJT?

Following are the applications of Bipolar Junction Transistor:

What happens if the transistor is not biased properly?

Following is the list of consequences if the transistor is not biased properly:

Why there is a maximum limit for the collector supply voltage for a transistor?

Test your knowledge on BJT
Q5