An electric motor is used to convert electrical energy into mechanical energy. Let’s go through an instance: What does the mixer in your house do for you? The rotating blades mash and mix things for you. And if someone were to ask you how that works, what would you say? You would probably say that it works on electricity. Well, that’s not incorrect. Motors convert electric energy to mechanical work. The opposite is done by generators that convert mechanical work to electrical energy.

Different Parts of an Electric Motor and Their Function

A simple motor has the following parts: 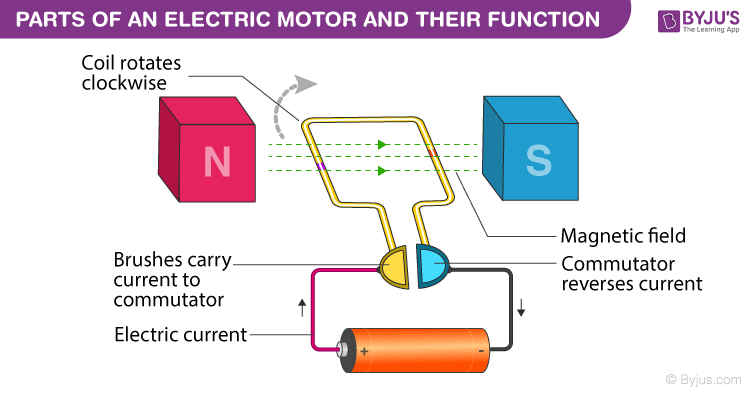 What Is The Working Principle of An Electric Motor?

The working of an electric motor is based on the fact that a current carrying conductor produces a magnetic field around it. To better understand, imagine the following situation.

Take two bar magnets and keep the poles facing each other with a small space in between. Now, take a small length of a conducting wire and make a loop. Keep this loop in between the space between the magnets such that it is still within the sphere of influence of the magnets. Now for the last bit. Connect the ends of the loop to battery terminals.

Once electricity flows through your simple circuit, you will notice that your loop “moves”. So why does this happen? The magnetic field of the magnets interferes with that produced due to electric current flowing in the conductor. Since the loop has become a magnet, one side of it will be attracted to the north pole of the magnet and the other to the south pole. This causes the loop to continuously rotate. This is the principle of working of electric motor.

The primary classification of electric motor is as follows:

Uses of an Electric Motor

Electric motors are used in a variety of applications. Some of them are listed below.

You can expect the efficiency of a functioning motor to be around 70 – 85% as the remaining energy is wasted in heat production and sounds emitted.