Spintronics or spin electronics is the study of the role that is played by the spin of an electron in the solid-state physics and other devices that exploit spin properties. Spintronics is also known as spin Flextronics is the study of the intrinsic spin of the electrons and its associated magnetic moment, in addition to fundamental electronic charge in solid-state devices. For example, spin transport and spin relaxation in semiconductors and metals are important solid-state physics issues that are included in the fundamental research along with new technology being implemented in the electronic storage technology. 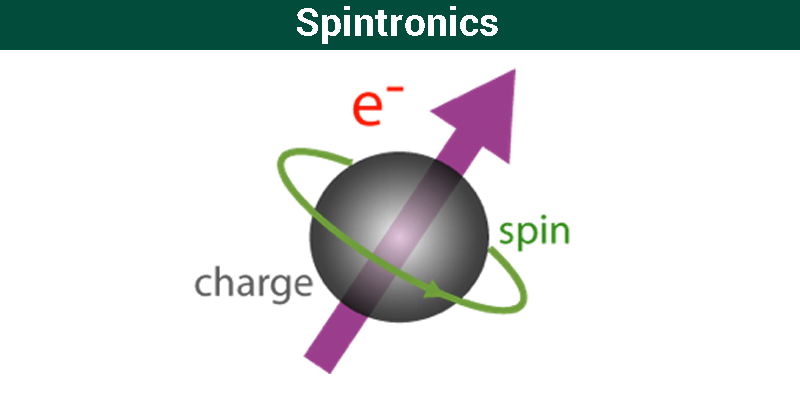 Spintronics helped in creating a prototype device which used in industry as a read head and a memory-storage cell is the giant-magneto resistive (GMR) sandwich structure which consists of alternating ferromagnetic and non-magnetic metal layers. Depending on the relative orientation of the magnetizations in the magnetic layers, the device resistance changes from small (parallel magnetizations) to large (antiparallel magnetizations).

This change in resistance (also called magnetoresistance) is used to sense changes in magnetic fields. Electron spin can be identified as a magnetic field having one of two positions, known as up and down. This gives an extra two binary states to the conventional high and low logic values, which are represented by simple currents. When the spin state is added to the mix, a bit can have four possible states, which can be called as up-high, up-low, down-high and down- low. These four states represent quantum bits or qubits.

Some spintronics applications are given below:

Stay tuned with BYJU’S to know more about detailed concepts about Spintronics, magnetic field, and much more.

Spintronics (spin electronics) is the study of the electron’s intrinsic spin, magnetic moment, and basic electric charge in solid-state devices.

What is a solid-state device?

A solid-state device is an electronic device in which electric current moves through solid semiconductor materials such as germanium, silicon, gallium arsenide, etc., rather than normal mechanical moving parts and vacuum tubes.

What are the main examples of solid-state devices?

Solid-state drives (SSDs), semiconductor lasers, and microprocessor chips are some of the main examples of solid-state devices.

What is meant by magnetic moment?

The magnetic moment is the measurement of a body’s extent of inclination to align with magnetic fields.

What is another name for the term magnetic moment?

Test Your Knowledge On Spintronics!
Q5