Carnot’s theorem also known as Carnot’s rule was developed by Nicolas Léonard Sadi Carnot in the year 1824, with the principle that there are limits on maximum efficiency for any given heat engine. It depends mainly on hot and cold reservoir temperatures. 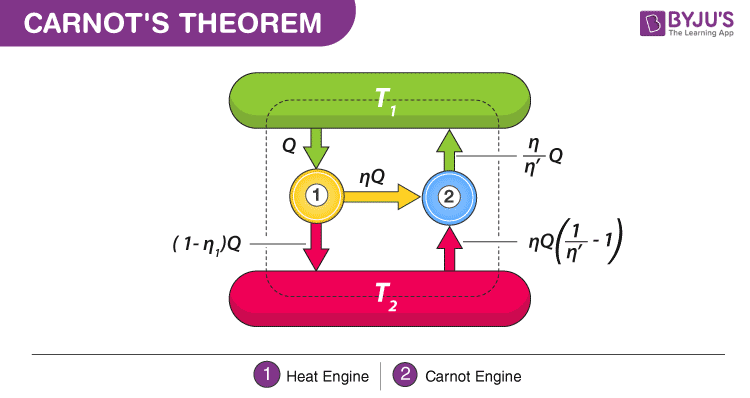 𝜼: the ratio of work done by the engine to heat drawn out of the hot reservoir

Processes involved in thermodynamics can be carried out in the following two ways:

The efficiency of all reversible engines remains the same that works between two same heat reservoirs.

There is no irreversible engine that is more efficient than the Carnot engine working between two same reservoirs.

Example of an irreversible engine are:

Stay tuned with BYJU’S to learn more about the Carnot engine and other related topics with video lectures and interactive sessions.

Q1. What working fluid is used in a Carnot cycle?

Ans: An ideal gas is used as a working fluid in a Carnot cycle.

Q2. What is the COP of a reversible heat pump?

Q3. What is the COP for a reversible refrigerator?

Q4. What is the efficiency of the reversible heat engine?

Q5. Give examples of a reversed heat engine.

Ans: Following are the examples of heat engine:

Q6. What is diesel cycle?

Q7. What is the efficiency and work ratio of a simple gas turbine cycle?

Ans: The ratio between the efficiency and work ratio is very low.

Q8. Name the gas that has a minimum molecular mass.

Ans: Non-coking bituminous coal is the fuel used in a steam boiler.

Q10. What is the relationship between gas constant and specific heat?

Ans: Gas constant is equal to the difference between two specific heats.