Usually, there are different units of measurement that are used for the expression of some electrical properties like current, resistance and others. In this page, we will talk about one property that is voltage and learn a few things about it. To begin with the definition, the voltage which is also known as electromotive force is a quantitative expression of the potential difference in charge between two points in an electrical field. Voltage can be direct or alternating. It is further symbolized by an uppercase italic letter V or E. Now, let us look at the units below.

The standard unit of measurement used for the expression of voltage is volt which is represented by the symbol v. However, the volt is a derived SI unit of electric potential or electromotive force. For this reason, volt can further be defined in several ways.

Volt can also be defined as electric potential along a wire when an electric current of one ampere dissipates one watt (W) of power (W = J/s).

Volt can be expressed as the potential difference between two points in an electric circuit that imparts one joule (J) of energy per coulomb (C) of charge that passes through the circuit.

It can also be expressed as amperes times ohms, joules per coulomb (energy per unit charge), or watts per ampere (power per unit current).

Some of the other electrical units are given below. 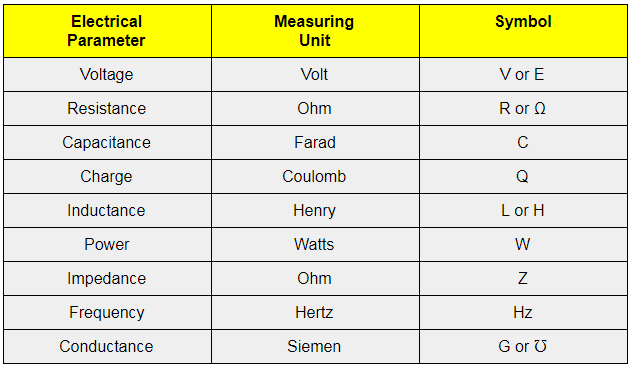