Gauss Law states that the total electric flux out of a closed surface is equal to the charge enclosed divided by the permittivity. The electric flux in an area is defined as the electric field multiplied by the area of the surface projected in a plane and perpendicular to the field. 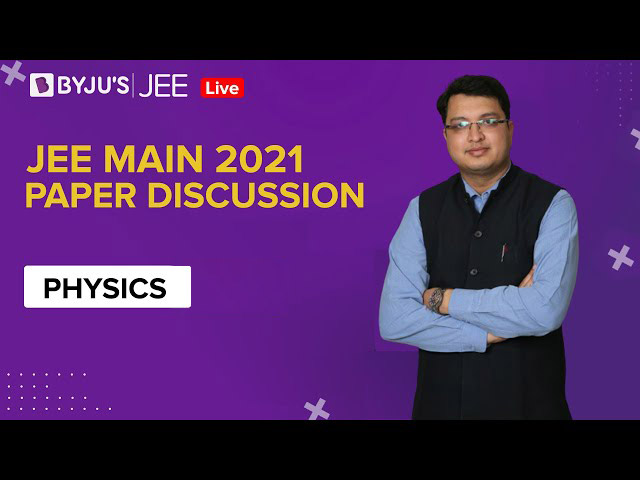 What is Gauss Law?

For example, a point charge q is placed inside a cube of edge ‘a’. Now as per Gauss law, the flux through each face of the cube is q/6ε0.

The Gauss law formula is expressed by;

Q = total charge within the given surface,

In simple words, the Gauss theorem relates the ‘flow’ of electric field lines (flux) to the charges within the enclosed surface. If there are no charges enclosed by a surface, then the net electric flux remains zero.

⇒ Note: The Gauss law is only a restatement of the Coulombs law. If you apply the Gauss theorem to a point charge enclosed by a sphere, you will get back Coulomb’s law easily.

1. In the case of a charged ring of radius R on its axis at a distance x from the centre of the ring. E =

3. The intensity of the electric field near a plane sheet of charge is E = σ/2ε0K where σ = surface charge density.

4. The intensity of the electric field near a plane charged conductor E = σ/Kε0 in a medium of dielectric constant K. If the dielectric medium is air, then Eair = σ/ε0.

5. The field between two parallel plates of a condenser is E = σ/ε0, where σ is the surface charge density. 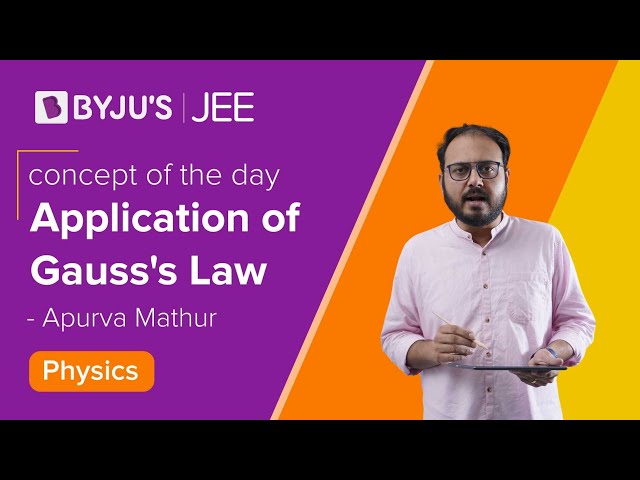 Consider an infinitely long line of charge with the charge per unit length being λ. We can take advantage of the cylindrical symmetry of this situation. By symmetry, The electric fields all point radially away from the line of charge, there is no component parallel to the line of charge.

We can use a cylinder (with an arbitrary radius (r) and length (l)) centred on the line of charge as our Gaussian surface. 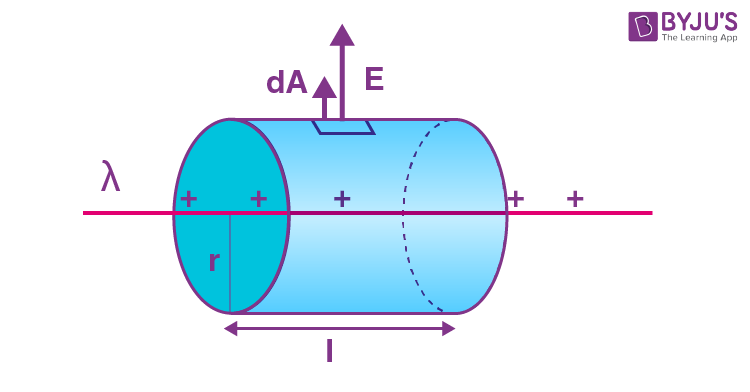 Applications of Gauss Law – Electric Field due to Infinite Wire

Thus, the electric flux is only due to the curved surface

According to Gauss Law,

Due to radial symmetry, the curved surface is equidistant from the line of charge and the electric field in the surface has a constant magnitude throughout.

The net charge enclosed by the surface is:

Problem 1: A uniform electric field of magnitude E = 100 N/C exists in the space in X-direction. Using the Gauss theorem calculate the flux of this field through a plane square area of edge 10 cm placed in the Y-Z plane. Take the normal along the positive X-axis to be positive.

As the normal to the area points along the electric field, θ = 0.

Problem 2: A large plane charge sheet having surface charge density σ = 2.0 × 10-6 C-m-2 lies in the X-Y plane. Find the flux of the electric field through a circular area of radius 1 cm lying completely in the region where x, y, z are all positive and with its normal making an angle of 600 with the Z-axis.

The electric field near the plane charge sheet is E = σ/2ε0 in the direction away from the sheet. At the given area, the field is along the Z-axis.

The angle between the normal to the area and the field is 600.

Hence, according to Gauss theorem, the flux =

Suppose, we have to find the field at point P. Draw a concentric spherical surface through P. All the points on this surface are equivalent and by symmetry, the field at all these points will be equal in magnitude and radial in direction.

The flux through this surface =

From Gauss law, this flux is equal to the charge q contained inside the surface divided by ε0. Thus,

Take the Gaussian surface through the material of the hollow sphere. As the electric field in a conducting material is zero, the flux

Using Gauss law, the total charge enclosed must be zero. Hence, the charge on the inner surface of the hollow sphere is 4 × 10-8C.

Problem 4: The figure shows three concentric thin spherical shells A, B and C of radii a, b, and c respectively. The shells A and C are given charges q and -q respectively and the shell B is earthed. Find the charges appearing on the surfaces of B and C. 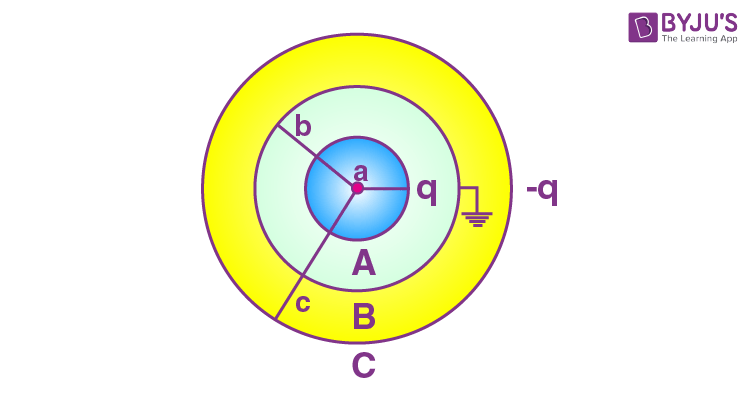 The inner surface of C must have a charge -q’ from Gauss law. As the net charge on C must be -q, its outer surface should have a charge q’ – q. The charge distribution is shown in the figure. 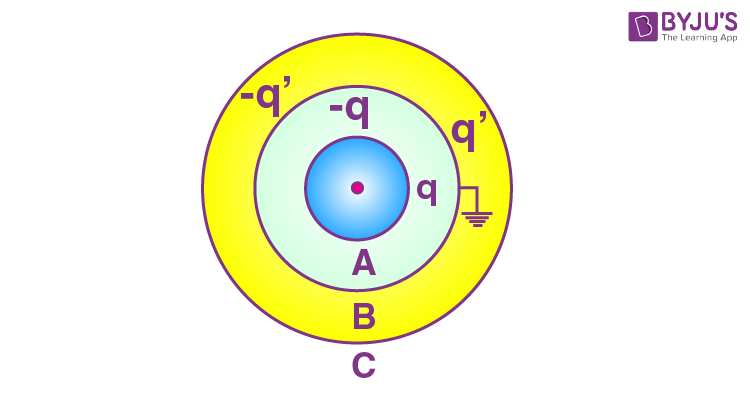 The potential at B,

The charges on various surfaces are as shown in the figure: 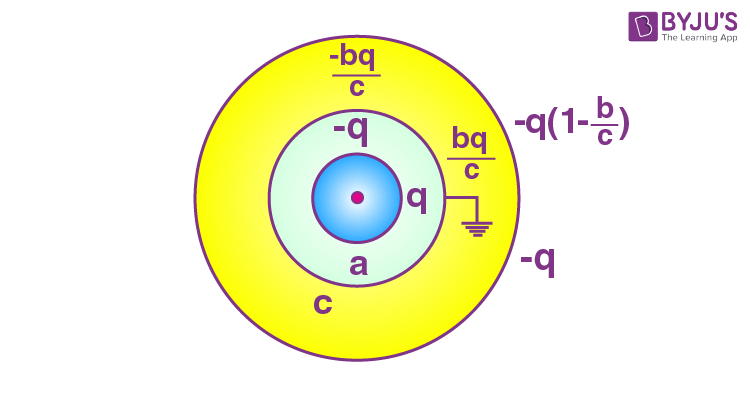 Problem 5: A particle of mass 5 × 10-6g is kept over a large horizontal sheet of charge of density 4.0 × 10-6 C/m2 (figure). What charge should be given to this particle so that if released, it does not fall down? How many electrons are to be removed to give this charge? How much mass is decreased due to the removal of these electrons?

The electric field in front of the sheet is,

If a charge q is given to the particle, the electric force qE acts in the upward direction. It will balance the weight of the particle if

Problem 6: Two conducting plates A and B are placed parallel to each other. A is given a charge Q1 and B a charge Q2. Find the distribution of charges on the four surfaces.

Consider a Gaussian surface as shown in figure (a). Two faces of this closed surface lie completely inside the conductor where the electric field is zero.

The flux through these faces is, therefore, zero. The other parts of the closed surface which are outside the conductor are parallel to the electric field and hence the flux on these parts is also zero. The distribution should be like the one shown in figure (b). To find the value of q, consider the field at a point P inside the plate A. Suppose, the surface area of the plate (one side) is A.

Using the equation E = σ/2ε0, the electric field at P;

As the point P is inside the conductor, this field is should be zero.

Problem 7: A solid conducting sphere having a charge Q is surrounded by an uncharged concentric conducting hollow spherical shell. Let the potential difference between the surface of the solid sphere and that of the outer surface of hollow shell be V. What will be the new potential difference between the same two surfaces if the shell is given a charge -3Q?

In case of a charged conducting sphere

So if a and b are the radii of a sphere and spherical shell respectively,

the potential at their surfaces will be;

Now when the shell is given a charge (-3Q) the potential at its surface and also inside will change by;

i.e., if any charge is given to external shell the potential difference between sphere and shell will not change.

This is because by the presence of charge on the outer shell, potential everywhere inside and on the surface of the shell will change by the same amount and hence the potential difference between sphere and shell will remain unchanged.

Problem 8: A very small sphere of mass 80 g having a charge q is held at height 9 m vertically above the centre of a fixed non conducting sphere of radius 1 m, carrying an equal charge q. When released it falls until it is repelled just before it comes in contact with the sphere. Calculate the charge q. [g = 9.8 m/s2]

Keeping in mind that here both electric and gravitational potential energy is changing and for an external point, a charged sphere behaves as the whole of its charge were concentrated at its centre.

Applying the law of conservation of energy between initial and final position, we have 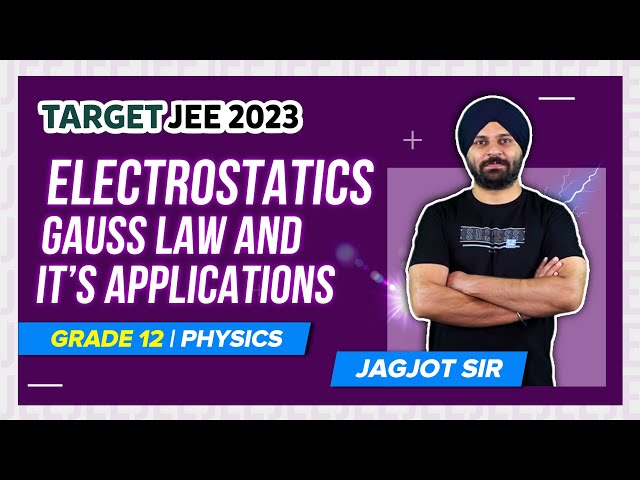 How is Gauss law Related to Coulomb’s law?

One of the fundamental relationships between the two laws is that Gauss law can be used to derive Coulomb’s law and vice versa. We can further say that Coulomb’s law is equivalent to Gauss’s law meaning they are almost the same thing. While this relation is discussed extensively in electrodynamics we will look at a derivation with the help of an example.

Let’s take a point charge q. Now if we apply Coulomb’s law the electric field generated  is given by:

where k=1 /4πϵ0. If we take the sphere of the radius (r) that is centred on charge q. Now for the surface S of this sphere, we will have:

At the end of the equation, we can see that it refers to Gauss law. All in all, we can determine the relation between Gauss law and Coulomb’s law by deducing the spherical symmetry of the electric field and by performing the integration.

How do we choose an appropriate Gaussian Surface for different cases?

In order to choose an appropriate Gaussian Surface, we have to take into account the states that the ratio of charge and the dielectric constant is given by a (two-dimensional) surface integral over the electric field symmetry of the charge distribution. There are three different cases that we will need to know.

We can choose the size of the surface depending on where we want to calculate the field. Gauss theorem is helpful for finding field when there is a certain symmetry as it tells us how the field is directed.

How is electric flux related to Gauss law?

When we talk about the relation between electric flux and Gauss law, the law states that the net electric flux in a closed surface will be zero if the volume that is defined by the surface contains a net charge.

To establish the relation we will first take a look at the Gauss law.

If we take the Gauss’s law it is represented as:

Notably, flux is considered as an integral of the electric field. This relation or form of Gauss’s law is known as the integral form.

What is the differential form of Gauss theorem?

How to find the electric field using Gauss law?

Calculations of inappropriate coordinate systems are to be performed along with the correct Gaussian surface for the particular symmetry.

Can Gauss law be applied to all surfaces?

For any closed surface and for any distribution of charges, Gauss’s law is valid.

Can Gauss law be applied to the non-uniform electric field?

Gauss’s law can be applied to uniform and non-uniform electric fields.

According to Gauss’s law, the net flux of an electric field in a closed surface is directly proportional to the charge enclosed.

What is the factor on which the electric field lines depend?

When is the flux through the surface taken as positive or negative?

What is called a Gaussian Surface?

Gaussian surface is the surface through which the electric flux is calculated.

When the charge is uniformly distributed over the surface of the conductor, it is called surface charge density.