What is Electric Field Intensity?

The space around an electric charge in which its influence can be felt is known as the electric field. The electric field intensity at a point is the force experienced by a unit positive charge placed at that point.

Due to a point charge q, the intensity of the electric field at a point d units away from it is given by the expression:

The intensity of the electric field at any point due to a number of charges is equal to the vector sum of the intensities produced by the separate charges.

Force Experienced by a Charge in Electric Field

The force experienced by a charge in an electric field is given by,

A charge in an electric field experiences a force whether it is at rest or moving. The electric force is independent of the mass and velocity of the charged particle, it depends upon the charge.

The Trajectory of Particle in Electric Field

The bob of a simple pendulum is given +ve charge and it is made to oscillate in a vertically upward electric field, then the time period of oscillation is

In the above case, if the bob is given a -ve charge then the time period is given by;

Projectile Motion in an Electric Field

A charged particle is projected with an initial velocity u and charges Q making an angle to the horizontal in an electric field directed vertically upward then,

1. The density of the electric field inside a charged hollow conducting sphere is zero.

2. A sphere is given a charge of ‘Q’ and is suspended in a horizontal electric field. The angle made by the string with the vertical is, θ = Tan-1 (EQ/mg).

4. A bob carrying a +ve charge is suspended by a silk thread in a vertically upward electric field, then the tension in the string is; T = mg – EQ.

Force Experienced by Electron and Proton

Acceleration of proton/Retardation of electron = mass of an electron/mass of a proton.

Question: A rigid insulated wireframe in the form of a right-angled triangle ABC, is set in a vertical plane as shown. Two beads of equal masses m and carrying charges q1 and q2 are connected by a cord of length L and can slide without friction on the wires. Considering the case when the beads are stationary, determine,

1. The forces acting on each bead are,

The directions of the forces are shown in the figure: 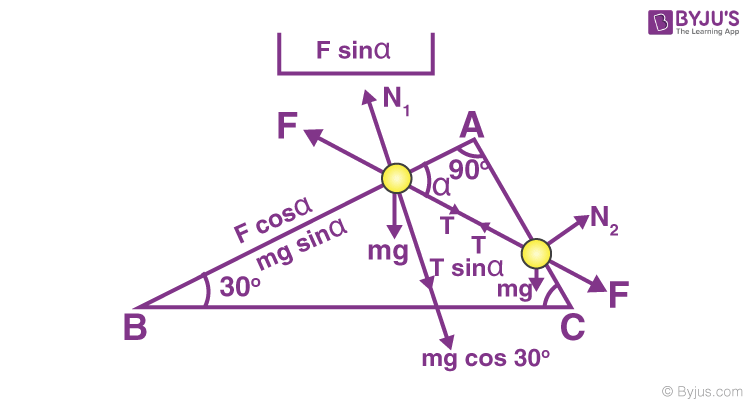 Equating the forces along and perpendicular to AB and AC, for the equilibrium of the beads;

2. Substituting the value of α in (1) and noting that

This result is on the assumption that q1 and q2 are of the same sign, so it was taken that there was a force of repulsion.

Since mg is fixed in direction, its sign cannot be reversed but the sign of F can be reversed because if q1 and q2 are of opposite sign, F will change its sign from + to -.

Let q1 and q2 be of the opposite sign then,

The test charge used to measure the electric field intensity at a point should be infinitesimally small. Why?

The test charge used must be infinitesimally small so that it will not produce a field of its own. The actual value of the electric field intensity will get altered because of the field produced by the test charge.

Electric intensity is a scalar or vector quantity?

Defne electric intensity at a point in an electric field.

Electric intensity at a point is the force on a unit positive charge at that point.