A simple pendulum can be described as a device where its point mass is attached to a light inextensible string and suspended from a fixed support. The vertical line passing through the fixed support is the mean position of a simple pendulum. The vertical distance between the point of suspension and the centre of mass of the suspended body (when it is in mean position) is called the length of the simple pendulum denoted by L. This form of the pendulum is based on the resonant system having a single resonant frequency.

A simple pendulum is a mechanical arrangement that demonstrates periodic motion. The simple pendulum comprises a small bob of mass ‘m’ suspended by a thin string secured to a platform at its upper end of length L.

The simple pendulum is a mechanical system that sways or moves in an oscillatory motion. This motion occurs in a vertical plane and is mainly driven by the gravitational force. Interestingly, the bob that is suspended at the end of a thread very light somewhat we can say it is even massless. The period of a simple pendulum can be made extended by increasing the length string while taking the measurements from the point of suspension to the middle of the bob. However, it should be noted that if the mass of the bob is changed it will the period remains unchanged. Period is influenced mainly by the position of the pendulum in relation to Earth as the strength of gravitational field is not uniform everywhere.

Meanwhile, pendulums are a common system whose usage is seen in various instances. Some are used in clocks to keep track of the time while some are just used for fun in case of a child’s swing. In some cases, it is used in an unconventional manner such as a sinker on a fishing line. In any case, we will explore and learn more about the simple pendulum on this page. We will discover the conditions under which it performs simple harmonic motion as well as derive an interesting expression for its period.

A point mass M is suspended from the end of a light inextensible string whose upper end is fixed to a rigid support. The mass is displaced from its mean position.

The torque tending to bring the mass to its equilibrium position,

Using I = ML2, [where I denote the moment of inertia of bob]

Therefore, the time period of a simple pendulum is given by,

The potential energy is given by the basic equation

m is the mass of the object

g is the acceleration due to gravity

h is the height of the object

However, the movement of the pendulum is not free fall it is constrained by the rod or string. The height is written in terms of angle θ and length L. Thus, h = L(1 – cos θ)

m is the mass of the pendulum

v is the velocity of the pendulum

At the highest point, the kinetic energy is zero and it is maximum at the lowest point. However, the total energy is constant as the function of time.

Mechanical Energy of the Bob:

The mean position of the pendulum may change. In these cases, g is replaced by “g effective”. For determining the time period (T).

A simple pendulum is an idealized model. It is not achievable in reality. But the physical pendulum is a real pendulum in which a body of finite shape oscillates. From its frequency of oscillation, we can calculate the moment of inertia of the body about the axis of rotation. 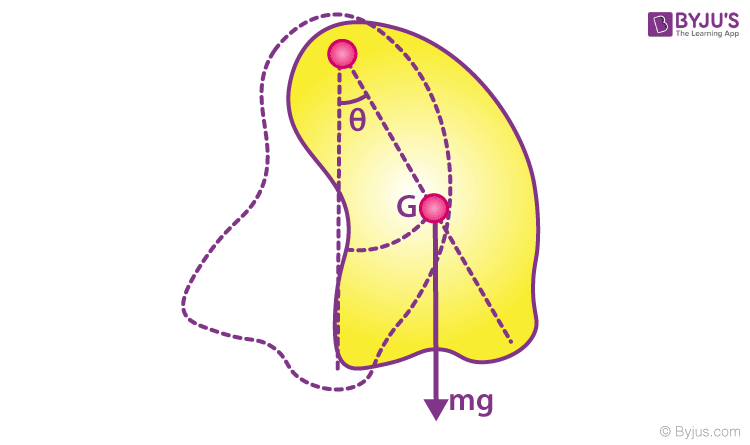 Consider a body of irregular shape and mass (m) is free to oscillate in a vertical plane about a horizontal axis passing through a point, weight mg acts downward at the centre of gravity (G).

⇒ Check: Centre of Mass of a System of Particles

If the body is displaced through a small angle (θ) and released from this position, a torque is exerted by the weight of the body to restore to its equilibrium.

Where I = moment of inertia of a body about the axis of rotation.

For ‘I’, applying parallel axis theorem,

Therefore, the time period of a physical pendulum is given by, 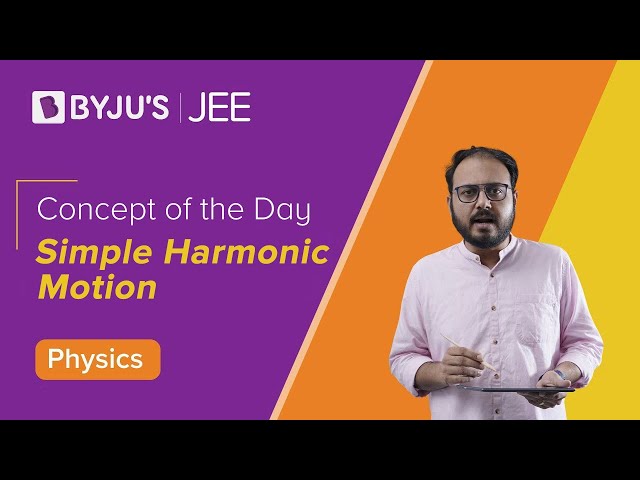 What is a simple pendulum?

A simple pendulum is a point mass suspended by a weightless and inextensible string fixed rigidly to support.

What is an expression for the time period of a simple pendulum?

On what factors does the energy of the particle executing S.H.M. depend?

What is a second’s pendulum?

A simple pendulum whose time period is 2 seconds is known as a second’s pendulum.

When will the motion of a simple pendulum be simple harmonic motion?

The motion of a simple pendulum will be simple harmonic motion if its angular displacement θ is very small.

When a pendulum is taken on top of the mountain will the time period increase or decrease?

The time period increases as ‘g’ decreases, so it gains time.

Why a simple pendulum does not vibrate at the centre of the earth?

A vibrating simple pendulum of time period T is placed in a lift which is accelerating upwards. What will be the effect on the time period?