Area Of a Circle

Area of a circle is the region occupied by the circle in a two-dimensional plane. It can be determined easily using a formula, A = πr2, where r is the radius of the circle. This area formula is useful for measuring the space occupied by a circular field or a plot. Suppose, if you have plot to fence it, then the area formula will help you to check how much fencing is required. Or suppose if you have to buy a table cloth, then how much portion of cloth is required to completely cover it. Hence, the concept of area as well as the perimeter is introduced in Maths, to figure out such scenarios.

Apart from the area, circles have a radius, diameter and circumference, as its property. This circumference is similar to the perimeter, where the total distance covered by the boundary of the circle is evaluated.  If the area of a given circle with radius r units is πr2 square units, then an area of semi-circle and quarter-circle with the same radius will be equal to πr2 / 2 and πr2 /4 square units respectively.

A circle closed plane geometric shape. In technical terms, a circle is a locus of a point moving around a fixed point at a fixed distance away from the point. Basically, anything which is round in shape is a circle. The fixed distance from the point is the radius of the circle. In real life, you will get many examples of circle such as a wheel, pizzas, a circular ground, etc. Now let us learn, what are the terms used in the case of circle.

The radius of the circle is the line which joins the centre of the circle to the outer boundary. It is usually represented by ‘r’ or ‘R’. In the formula for area and circumference of a circle, radius plays an important role which you will learn later.

The diameter of the circle is the line which divides the circle into two equal parts. In an easy way we can say, it is just the double of the radius of the circle and is represented by ‘d’ or ‘D’. Therefore,

Any geometrical shape has its own area. This area is the region occupied the shape in a two-dimensional plane. Now we will learn about the area of the circle. So the area covered by one complete cycle of radius of the circle on a two-dimensional plane is the area of that circle. Now how can we calculate the area for any circular object or space? In this case, we use the formula for the circle’s area. Let us discuss the formula now.

Area of a Circle Formula

Let us take a circle with radius r. 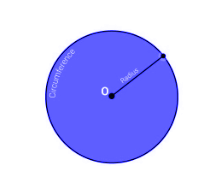 In the above figure, we can see a circle, where radius r from the centre ‘o’ to the boundary of the circle. Then the area for this circle, A, is equal to product of pi and square of radius. It is given by;

Derivation of Area of Circle

Area of a circle can be visualized & proved using two methods, namely

Let us understand both the methods one-by-one-

The circle is divided into 16 equal sectors and the sectors are arranged as shown in the fig. 3. The area of the circle will be equal to that of the parallelogram-shaped figure formed by the sectors cut out from the circle. Since the sectors have equal area, each sector will have equal arc length. The green coloured sectors will contribute to half of the circumference and blue coloured sectors will contribute to the other half. If the number of sectors cut from the circle is increased, the parallelogram will eventually look like a rectangle with length equal to πr and breadth equal to r.

When the length of the radius or diameter or even the circumference of the circle is already given, then we can use the surface formula to find out the surface area. The surface is represented in square units.

Example: What is the radius of the circle whose surface area is 314.159 sq.cm?

Solution: By the formula of the surface area of the circle, we know; 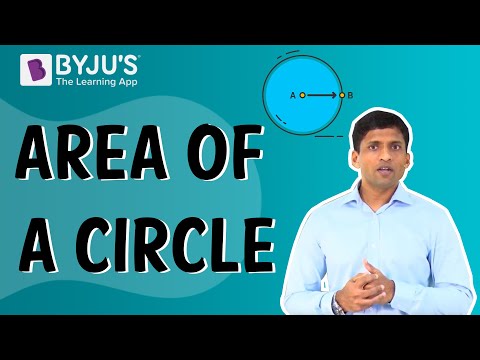 The perimeter of the circle is equal to the length of its boundary. The length of rope which wraps around its boundary perfectly will be equal to its circumference, which can be measured by using the formula:

where r is the radius of the circle.

π, read as ‘pi’ is defined as the ratio of the circumference of a circle to its diameter. This ratio is the same for every circle. Consider a circle with radius ‘r’ and circumference ‘C’. For this circle

Examples on Area and Circumference of Circle

We have discussed till now about the different parameters of circle such as area, perimeter or circumference, radius and diameter. Let us solve some problems based on these formulas to understand the concept of area and perimeter in a better way.

Question 1: If the radius of a circle is 15cm. Then find its area.

Given, radius of circle = 15cm

The, area will be;

Question 2: If the diameter of a circle is 10cm. Then find its area.

Question 3: If the circumference of a given circle is 30cm. Then what will be its area.

Given, the circumference of a circle = 30cm

We know, from the formula of circumference, C =2πr

So, we can write,

As we found the value of r, now we can find the area;

On solving we get,

Subscribe to our BYJU’S YouTube channel to learn even the most difficult concepts in easy ways or visit our site to learn from wonderful animations and interactive videos.