Life Cycle of a Star

Seven Main Stages of a Star

Stars come in a variety of masses and the mass determines how radiantly the star will shine and how it dies. Massive stars transform into supernovae, neutron stars and black holes while average stars like the sun, end life as a white dwarf surrounded by a disappearing planetary nebula. All stars, irrespective of their size, follow the same 7 stage cycle, they start as a gas cloud and end as a star remnant. 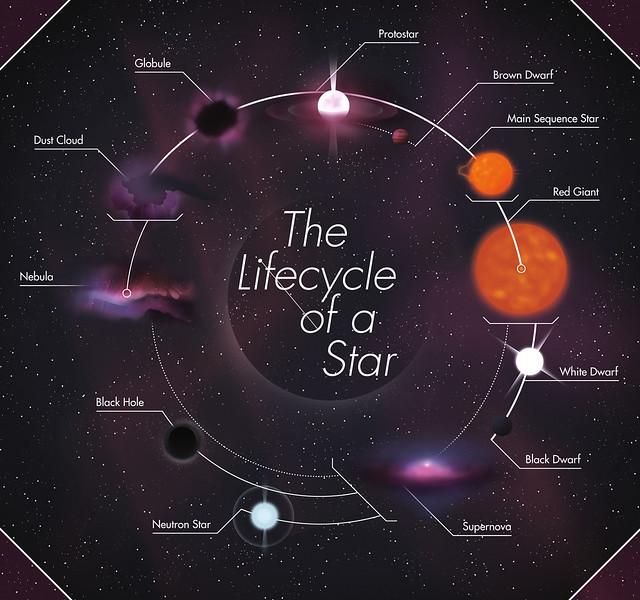 A star originates from a large cloud of gas. The temperature in the cloud is low enough for the synthesis of molecules. The Orion cloud complex in the Orion system is an example of a star in this stage of life.

A T-Tauri star begins when materials stop falling into the Protostar and release tremendous amounts of energy. The mean temperature of the Tauri star isn’t enough to support nuclear fusion at its core. The T-Tauri star lasts for about 100 million years, following which it enters the most extended phase of development – the Main sequence phase.

The main sequence phase is the stage in development where the core temperature reaches the point for the fusion to commence. In this process, the protons of hydrogen are converted into atoms of helium. This reaction is exothermic; it gives off more heat than it requires and so the core of a main-sequence star releases a tremendous amount of energy.

A star converts hydrogen atoms into helium over its course of life at its core. Eventually, the hydrogen fuel runs out, and the internal reaction stops. Without the reactions occurring at the core, a star contracts inward through gravity causing it to expand. As it expands, the star first becomes a subgiant star and then a red giant. Red giants have cooler surfaces than the main-sequence star, and because of this, they appear red than yellow.

6. The Fusion of Heavier Elements

Helium molecules fuse at the core, as the star expands. The energy of this reaction prevents the core from collapsing. The core shrinks and begins fusing carbon, once the helium fusion ends. This process repeats until iron appears at the core. The iron fusion reaction absorbs energy, which causes the core to collapse. This implosion transforms massive stars into a supernova while smaller stars like the sun contract into white dwarfs.

Most of the star material is blasted away into space, but the core implodes into a neutron star or a singularity known as the black hole. Less massive stars don’t explode, their cores contract instead into a tiny, hot star known as the white dwarf while the outer material drifts away. Stars tinier than the sun, don’t have enough mass to burn with anything but a red glow during their main sequence. These red dwarves are difficult to spot. But, these may be the most common stars that can burn for trillions of years.

The above were the seven main stages of the life cycle of a star. Whether big or small, young or old, stars are one of the most beautiful and lyrical objects in all of creation. Next time you look up at the stars, remember, this is how they were created and how they will die.

Did you know that some of the stars we see in the sky may already be dead! Their light travels millions and millions of kilometres, and by the time it reaches us, the star would have died. So the distance between our planet and the stars further away is unimaginable, but measurable still. Watch and learn how these distances can be measured and the secrets hiding among the stars. 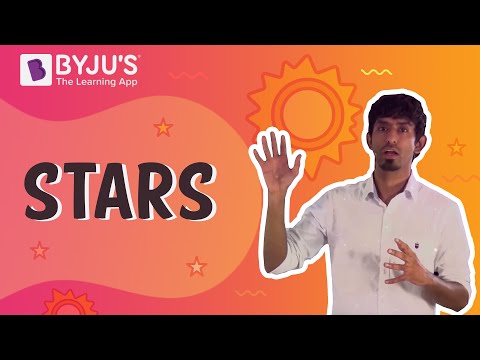 Choose YES or NO: Do stars die?

Yes, stars do die once they complete their lifecycle.

What are the different stages of life cycle of stars?

Different stages of life cycle of stars are:

State true or false: All stars start as a gas cloud and end as a star remnant.

In which stage, star converts hydrogen atoms into helium at its core?

This process takes place in the red giant stage.

which reaction takes place inside the star?

Test your knowledge on Life cycle of a star
Q5