On a clear moonless night we can see thousands upon thousands of stars dotting the night sky. If we are a little creative, we can imagine the shapes and patterns these stars can make. Some of these patterns made up of groups of bright stars are easy to recognize, and we call such groups as a constellation.

How are Constellations Named?

The ancient people named many of these recognizable constellations after the objects or animals they resembled. They built stories around them too. For example, the constellation Perseus, Andromeda, Cetus, Cassiopeia and Pegasus are all linked to the mythology of the Greeks. Common constellation names are similar across cultures such as Pisces – the fish in Greek is also called Meena (also meaning fish) in Sanskrit.

There are 12 major constellations that line up along the sun’s path along the sky (called the ecliptic). These are the Zodiac constellations: Aries (Mesha), Taurus (Vrushabha), Gemini (Mithuna), Crab/Cancer (Karka), Leo (Simha), Virgo (Kanya), Libra (Tula), Scorpion (Vruschika), Saggitarius (Dhanusha), Capricorn (Makara), Aquarius (Kumbha), Pisces (Meena). These constellations were used to track the movement of the sun and track time in ancient times. 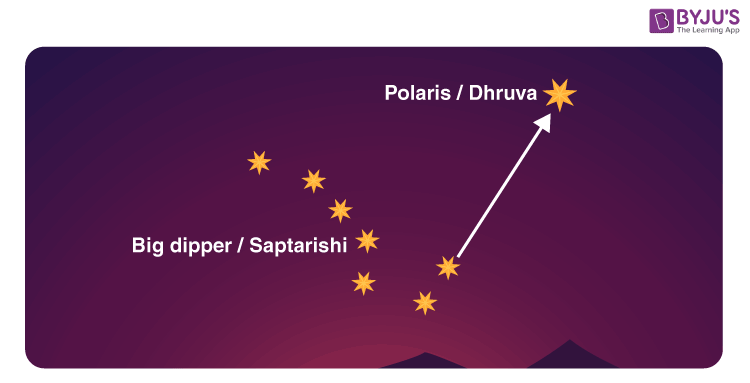 The big dipper also called as Saptarishi in India is a group of seven stars visible in the Northern Hemisphere. The constellation looks like a big ladle or like a wheelbarrow and is part of a bigger constellation called Ursa Major (The Great Bear). Two of the stars in this constellation appear to point to the pole star (Polaris/Dhruva). The pole star is the only star in the night sky that does not appear to move east to west but appears fixed. This is because it is directly above the earth’s axis.

This is a constellation known as ‘the hunter’ or Mriga in India. It has numerous bright stars in it. Three bright stars that are in line make up the “belt” of the hunter. These three stars point to the brightest star in the night sky – Sirius. 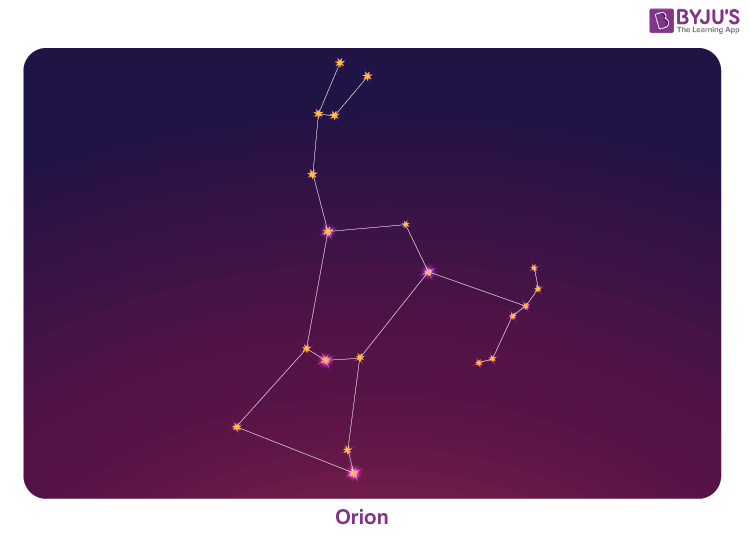 What is a star?

A star is a celestial body consisting of a luminous plasma spheroid held together by its gravity. The Sun is the nearest star to the Earth.

What is a constellation?

A constellation is a region in the sky in which a group of observable stars form an identifiable outline or pattern, conventionally representing a mythological figure, a creature or an inanimate object.

What are the main twelve zodiac constellations?

Which is the biggest constellation in the night sky?

Hydra is the biggest constellation in the night sky.

Give a brief description of the Orion constellation.

The Orion constellation is also called ‘the hunter’ or Mriga in India. Three bright stars that are placed in a line form the ‘belt’ of the hunter. Sirius is part of this constellation (the brightest star in the night sky).
Test your knowledge on Constellations
Q5