What is an Electroscope?

An electroscope is a scientific device that is used to detect the presence of an electric charge on a body. In the year 1600, British physician William Gilbert invented the first electroscope with a pivoted needle called versorium.

Electroscope detects the charge based on the Coulomb electrostatic force which causes the motion of test charge. Electroscope can be regarded as a crude voltmeter as the electric charge of an object is equal to its capacitance. An instrument that is used to measure the charge quantitatively is known as an electrometer.

The working principle of an electroscope is based on the atomic structure of elements, charge induction, the internal structure of metal elements and the idea that like charges repel each other while unlike charges attract each other.

An electroscope is made up of a metal detector knob on top which is connected to a pair of metal leaves hanging from the bottom of the connecting rod. When no charge is present the metals leaves hang loosely downward. But, when an object with a charge is brought near an electroscope, one of the two things can happen.

There are two classical types of electroscopes and they are as follows:

Figure 1: The Pithball electroscope from the 1870s showing attraction to a charged particle 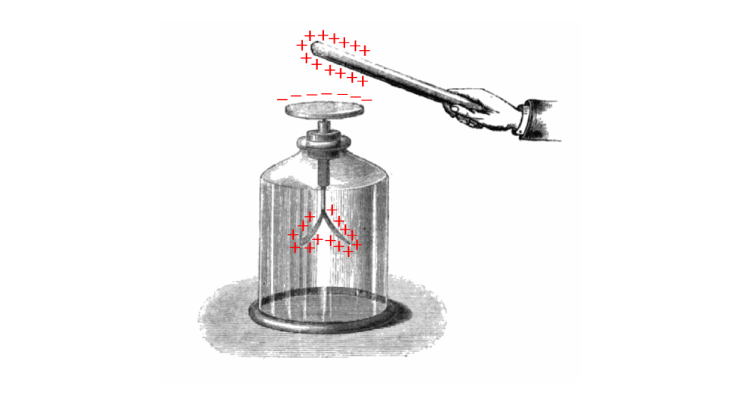 Following are the uses of electroscope:

To know more about other Physics related concepts, stay tuned with BYJU’S.

What is an electroscope?

An electroscope is a device used to detect the presence of an electric charge on a body.

What is an electrometer?

Electrometer is an instrument used to measure the charge quantitatively.

What are the types of electroscopes?

State true or false: Electroscope is used to detect the static charges.

Who developed the gold-leaf electroscope?

In the year 1787, Gold-leaf electroscope was developed by Abraham Bennet.
Test your knowledge on Electroscope
Q5