What is the Coefficient Of Static Friction?

It is “The maximum ratio of applied force to normal force with no motion” we all know Frictional force is a force which opposes motion. If we keenly observe, once you apply force to move a body from rest, there exists a point up to which the body resist to move. To move the body the applied force should be greater to overcome this resistance. This maximum resistive force offered by the body against the applied force to continue its state of motion is called Coefficient Of Static Friction.

The magnitude of the frictional force depends on two factors

The roughness of the surface is often measured by a parameter called the Coefficient Of Static Friction. It is mathematically expressed as the ratio of applied force to the normal reaction. Given by-

It is represented by the Greek alphabet

It is a unit less quantity. As it is the ratio of two forces. The respective S.I units get cancelled. This also implies that it is a dimensionless quantity.

In the above illustration, we can see a heavy wooden box placed on the floor. If you try to push the box away from you. Due to the presence of friction the box is going to say ‘No No I’m not going to go that way!’ The reason for this is the roughness of the surface/floor. If we see the point of contact between the box and the floor with higher resolution, we can see microscopic deformations.

These tiny imperfections present on the surface is going to resist the motion. How much resistance to the motion depends on the force of friction. To understand that, it is important to know about the forces that are acting on the box along with its directions.

The moment you start pushing the box away from you as shown in the figure(1). Initially, it does not move, you push it and it pushes you back, eventually, strong enough, the box does start to move. At this point, there exists a small interval between the moment you started pushing the box and the box just started to move, that is where the coefficient of static friction comes into the picture. This value plays a crucial role in many applications.

This value is directly proportional to the applied force. To simplify the exercise and calculate the values precisely Coefficient Of Static Friction calculator is developed.

Watch the video and understand how static friction varies with applied external force. 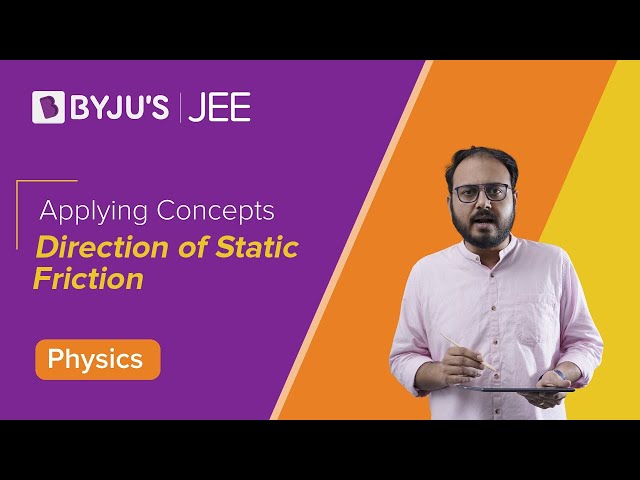 Get registered to BYJU’S- The learning app for more Physics related videos.

It is the force opposing the relative motion of fluid layers, solid surfaces, and body elements sliding against one another.

What are the two types of friction?

What is meant by static friction?

What are the two factors that control the magnitude of a frictional force?

The magnitude of the frictional force is by the two factors:

How heavy is the material
How rough is the surface

What is the unit of static friction?

It is a unitless quantity as it is the ratio of two forces.
Test Your Knowledge On Coefficient Of Static Friction!
Q5