The Electromagnetic Spectrum And X-Rays

X-Rays are part of the electromagnetic spectrum having wavelengths in the range between 0.01 nm to 10 nm. They have a frequency range between 30 PHz to 30 EHz and energies ranging from 100 eV to 100 keV. But the main use of  X-Rays is because of their property of being able to penetrate through hard and dense structures like the human bones and therefore they are extensively used in the field of healthcare.

X-rays were first discovered by a German physicist Wilhelm C Roentgen. In a gas discharge tube called the Crooke’s tube, he applied a high voltage to the electrodes (cathode: wire filament and anode: copper), the electrons which were formed at the cathode end would strike the anode with very high speed. The radiations which were formed at the anode end had extreme penetrating properties. Wilhelm called these radiations X-Rays. The X-Ray machines used in hospitals produce radiations similarly but using tungsten as the anode and controlling the amount of radiation produced effectively.

Since they have high energies, overexposure to radiation from X-Rays can cause tissue damage. This is why applying this kind of radiation, even for medical purposes, comes with a long list of precautions. Pregnant people are advised against using the X-Rays application to prevent any harm to the fetus.

The distinction between Hard X-Rays and Gamma Rays are somewhat hazy. They, however, can be identified by their source. Gamma rays are produced from the nucleus of the atom whereas X-Rays are produced due to the electrons in the atom. 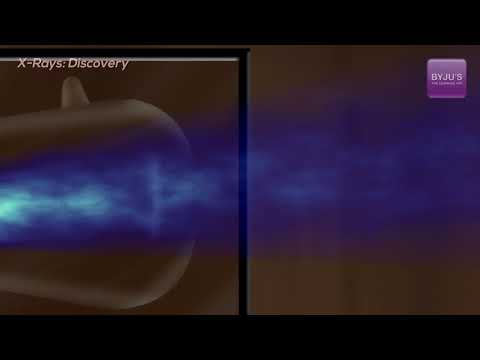