What are the Fundamental Forces in Nature?

There are four universal or fundamental forces in nature. Without these forces, all matter in the world will fall apart. Force as such is any pull or push that causes an object to alter its physical state (in terms of motion or deformity). Newton defined a force as anything that causes an object of mass ‘m’ to move with an acceleration ‘a’. Following are the four fundamental forces in nature:

A brief overview of the four fundamental forces is given below.

Why is the universe not filled with floating human beings and cows and cars and other such things? Obviously, because the gravitational force of the earth holds us to the planet. Gravitational force is the force responsible for holding planets in their orbits and this is possible only because of their infinitely long-range.

Gravitational force is one of the four fundamental forces of nature. It is the weakest of the four. It is also the attractive force which arises from the gravitational interaction.

Gravitational force can be represented as follows

Did you know that you have never truly ever touched anything in the world? You are matter, and we know that all matter is made up of atoms. Atoms in turn has a dense nucleus, protons, neutron and electrons. And where are these electrons? They occupy the outermost layer of an atom. Now what is the charge on electrons? They have negative charges.

By their nature, all particles are only attracted to particles that have an opposite charge and repel those with like charges.

Say you feel like holding a pen. The pen is a matter made of atoms filled with nuclei, neutrons, protons and electrons spinning around the nucleus as well. By nature, the electrons that you are made of and the electrons that make up your pen will repel each other. So technically, you never truly touch anything!

These have a long-range and the effect of their forces diminishes over distance due to the shielding effect. However, sub-atomically, they have short-range and are considered strong forces but still weaker than strong nuclear forces.

Same charged protons attract each other due to Nuclear force[/caption]

This is the most dominant force in reactions and is so strong that it binds protons with similar charges with the nucleus. It is mostly attractive in nature but can be repulsive sometimes. It has a very short range of just 1 fm.

Weak force is the force existing between the elementary particles which are responsible for certain processes to take place at a low probability.

Weak nuclear forces are responsible for the radioactive decay, specifically the beta decay neutrino interactions. It has a very short range (less than 1 fm) and this force is, as the name suggests, weak in nature.

Following are the properties of weak force:

Name the factors affecting the value of acceleration due to gravity.

Following are the factors affecting the value of acceleration due to gravity:

What is the distance between the two protons to attract each other?

The distance between the two protons should be 10-15cm so that they attract each other.

Name the force responsible for existence of the protons in the nucleus of an atom.

Protons are existing in the nucleus of an atom because of the strong attractive nuclear force which binds them with each other.

What is Ampere law?

Ampere law is also known as Ampere circuital law which states that the closed integral of the magnetic field intensity is the same as the current enclosed by it.

What is Nuclear Force? 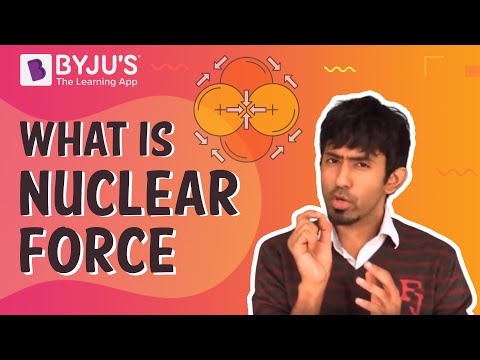 Test Your Knowledge On What Are The Fundamental Forces In Nature!
Q5