Often we hear sound when we talk to people, listen to music, play a musical instrument, etc. But have you ever wondered what sound is and how it originated? In this article, let us find answers to all these questions.

A sound is a vibration that propagates through a medium in the form of a mechanical wave. The medium in which it propagates can either be a solid, a liquid or a gas. Sound travels fastest in solids, relatively slower in liquids and slowest in gases.

In physics, the sound is defined as

A vibration that propagates as an audible wave of pressure, through a medium such as a gas, liquid or solid.

In psychology, the sound is defined as

The reception of sound pressure waves and their perception by the brain.

What is a Soundwave?

A sound wave is the pattern of disturbance caused by the energy travelling away from the source of the sound. Sound waves are longitudinal waves. This means that the propagation of vibration of particles is parallel to the energy wave propagation direction. When the atoms are set in vibration they move back and forth. This continuous back and forth motion results in a high-pressure and a low-pressure region in the medium. These high- pressure and low-pressure regions are termed compressions and rarefactions, respectively. These regions are transported to the surrounding medium resulting in the sound waves travelling from one medium to another.

Understand the concept of sound clearly by watching the video below which visualises the occurrence of sound waves when a guitar string is strummed. The amplitude of the sound is the magnitude of the maximum disturbance in a sound wave. The amplitude is also a measure of energy. Higher the amplitude higher the energy in a sound wave.Humans can hear a limited range of frequencies of sound. Physicists have identified the audio frequency spectrum of the human ear to be between 20 Hz and 20,000 Hz. Under ideal laboratory conditions, the human ear can detect frequencies that are as low as 12 Hz and as high as 20,000 Hz. 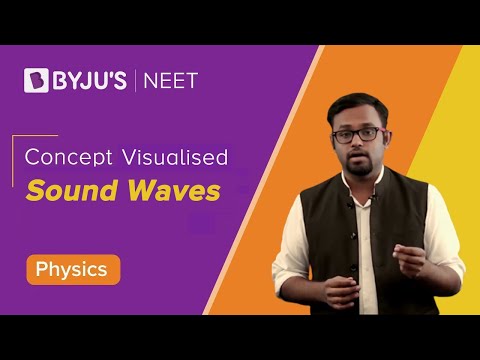 When a sound hits a hard surface, it reflects back to its source. This reflection of sound is otherwise is called an echo. Hard surfaces have a tendency to reflect sound while soft surfaces absorb sound and silence them. If the frequency of the sound wave is low, then the sound wave will not get reflected. Sometimes, we hear multiple echoes from a source of sound if the area is large and has multiple reflecting surfaces such as valleys and huge empty rooms. This phenomenon is known as reverberation.

Stay tuned to BYJU’S to know more about concepts like Doppler Effect that is commonly associated with sound waves.

Mechanical waves are waves that require a medium to transport their energy from one location to another. Sound is a mechanical wave and cannot travel through a vacuum.

In which medium does the sound wave travel the fastest?

The sound waves travel the fastest through solids.

What is the frequency of a sound wave?

The number of rarefactions and compressions that occur per unit of time is known as the frequency of a sound wave.

In which medium is the speed of sound the lowest?

The speed of sound is lowest in gases.

What is the reverberation of sound?

If the area is large and has multiple reflecting surfaces such as valleys and huge empty rooms, we hear multiple echoes from a source of sound and we call this phenomenon reverberation..

To know more about the properties, characteristics of sound wave you can register to BYJU’s or download our app for simple and interesting content.