Q1) When a plane mirror is rotated through a certain angle, the reflected ray turns through twice as much and the size of the image:

Q2) If an object is placed symmetrically between two plane mirrors, inclined at angle of 72 degree, then total no. of images formed:

Q3) Which statement is true for the reflection of light?

(a) The angle of incidence and reflection are equal.

(b) The reflected light is less bright than the incident light.

(c) The sum of angle of incidence and reflection is always greater than 900.

(d) The beams of incident light after reflection diverge at unequal angles.

Q4) Focal length of a plane mirror is

Q5) The image shows the path of incident rays to a concave mirror. 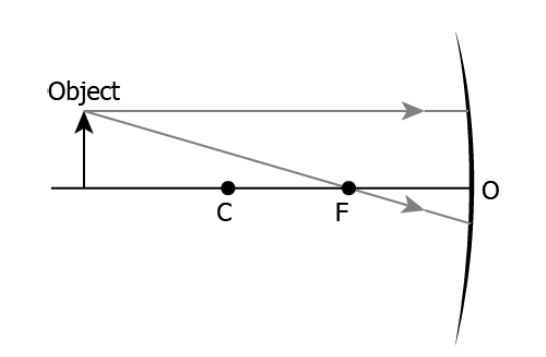 Where would the reflected rays meet for the image formation to take place?

(a) behind the mirror

Q6) A beam of light incident on a plane mirror forms a real image on reflection. The incident beam is :

Q7) An object is placed at a distance of 40cm in front of a concave mirror of focal length 20cm.

The image produced is:

(a) virtual and inverted

(b) real and erect

(c) real, inverted and of the opposite size as that of the object

(d) real, inverted and of the same size as that of the object

Q10) Image formed by a convex spherical mirror is:

(a) because the reflected ray never intersects

(b) because the reflected ray converges at a single point

Q12) A 10 mm long awl pin is placed vertically in front pin is formed at 30cm in front of the mirror. The focal length of this mirror is:

Q13) Rahul conducts an experiment using an object of height 10 cm and a concave lens with focal length 20 cm. The object is placed at a distance of 25 cm from the lens. Can the image be formed on a screen?

(a) yes, as the image formed will be real

(b) yes, as the image formed will be erect

(c) no, as the image formed will be virtual

(d) no, as the image formed will be inverted

(a) is less than one

(b) is more than one

Q15) A student conducts an activity using a concave mirror with focal length of 10 cm. He placed the object 15 cm from the mirror. Where is the image likely to form?

(a) the object itself

(d) behind the mirror

Q17) A full length of image of a distant tall building can definitely be seen using:

(a) a concave mirror

(b) a convex mirror

(d) both concave as well as plane mirror

Q18) A student conducts an activity using a flask of height 15 cm and a concave mirror. He finds that the image formed is 45 cm in height. What is the magnification of the image?

Q19) Which of the following can make a parallel beam of light from a point source incident on it?

(a) concave mirror as well as convex lens

(b) convex mirror as well as concave lens

(c) two plane mirrors placed at 90degree to each other

(a) difference in density

(b) difference in temperature

(c) difference in amount of light

Which mirror can form a real image of an object?

The swimming pool appears to be less deep than it actually is. Which of the following phenomena is responsible for this?

A 3 cm high object is placed at a distance of 80cm from a concave lens of focal length 20cm. Find the size of the image formed?

We hope students have found this information on “CBSE Class 10 Science MCQ Chapter 10 Light – Reflection and Refraction” useful for their exam preparation. Keep learning and stay tuned for further updates on the CBSE Exam. Download BYJU’S App and subscribe to the YouTube channel to access interactive study videos.