Get access to Sound notes for class 9 here at BYJU’S. Notes are prepared by academic professionals having extensive knowledge. They are put across in a crisp and concise layout for the best of students’ comprehension. Continue reading to explore sound notes in detail.

Sound Needs A Medium To Travel

Characteristics Of A Sound Wave

Speed Of Sound In Different Media

Uses Of Multiple Reflection Of Sound

Introduction To The chapter

Sound is a form of energy which enables the ears to hear. Sound can be transformed from one to another form. It is produced due to the vibration of objects. For example, stretched strings of a guitar vibrate to produce sound. Medium is a matter or substance through which sound is transmitted which can either be solid, liquid or gas. Sound moves through a medium from the point of generation to the listener.

Production and Propagation of Sound

When an object vibrates, particles of the medium are set to vibrate. They do not travel all the way from the vibrating object to the ear. The particle of the medium in contact with the vibrating object is displaced first from its equilibrium position which then exerts a force on the adjacent particle. Hence the adjacent particle is displaced from its place of rest after which it comes back to its original position. The process continues until it reaches the ear. Hence, the disturbance created by a source of sound travels through the medium and not the particles of the medium.

A wave is a disturbance that moves through a medium when the particles of the medium set neighbouring particles into motion. Sound waves are characterised by the motion of particles in the medium and are called mechanical waves.

Compression – when a vibrating object moves forward, it pushes and compresses the air in front to create a region of high pressure which is known as compression

Rarefaction – When a vibrating object moves backwards, it creates a region of low pressure known as rarefaction.

Sound Needs A Medium To Travel

Sound is a mechanical wave which requires a material medium such as air, water, steel etc to propagate, hence it cannot travel through a vacuum which can be demonstrated through the bell jar experiment. 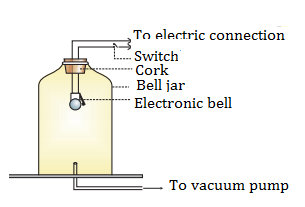 Characteristics Of A Wave

A sound wave can be described by its:

Some Important Terminologies Associated With Sound

Stay tuned with BYJU’S for more on Sound notes.