NCERT Exemplar Solutions for Class 9 Science Gravitation is an essential study material for the students who wish to score well in Class 9 examination. This Exemplar page provides a variety of question with varied difficulty. Solving these NCERT Exemplars will help to understand the concepts clearly and this will, in turn, help you to take a note of key concepts. 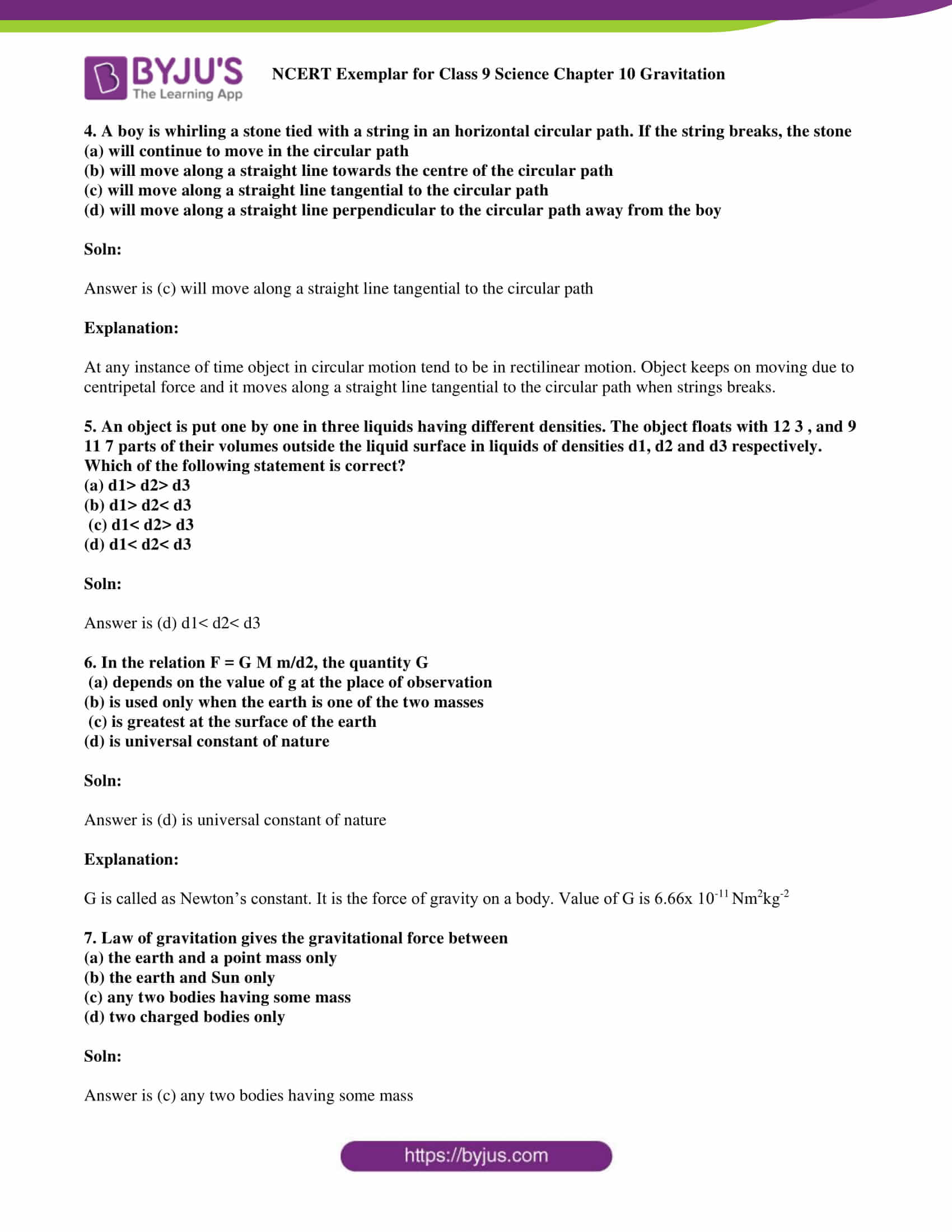 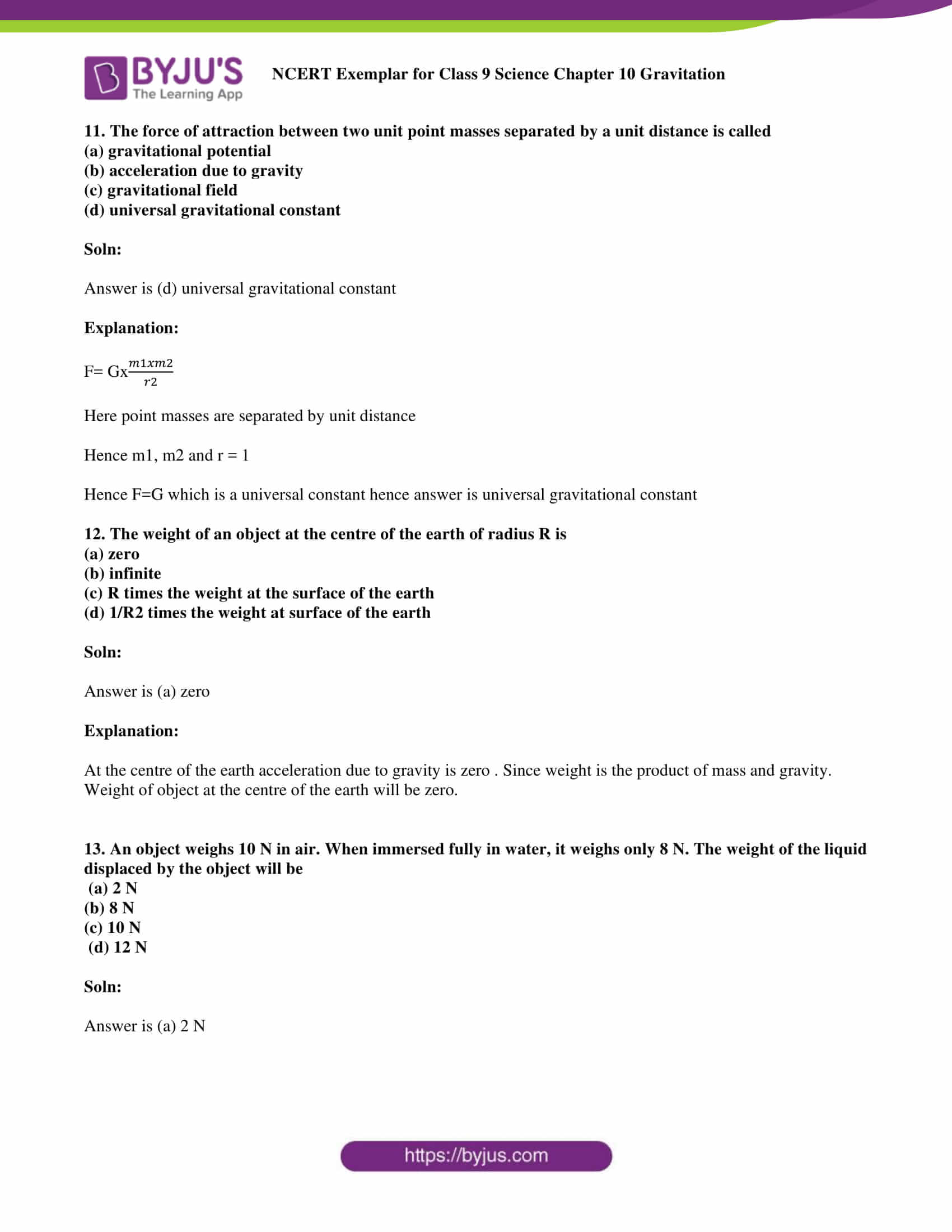 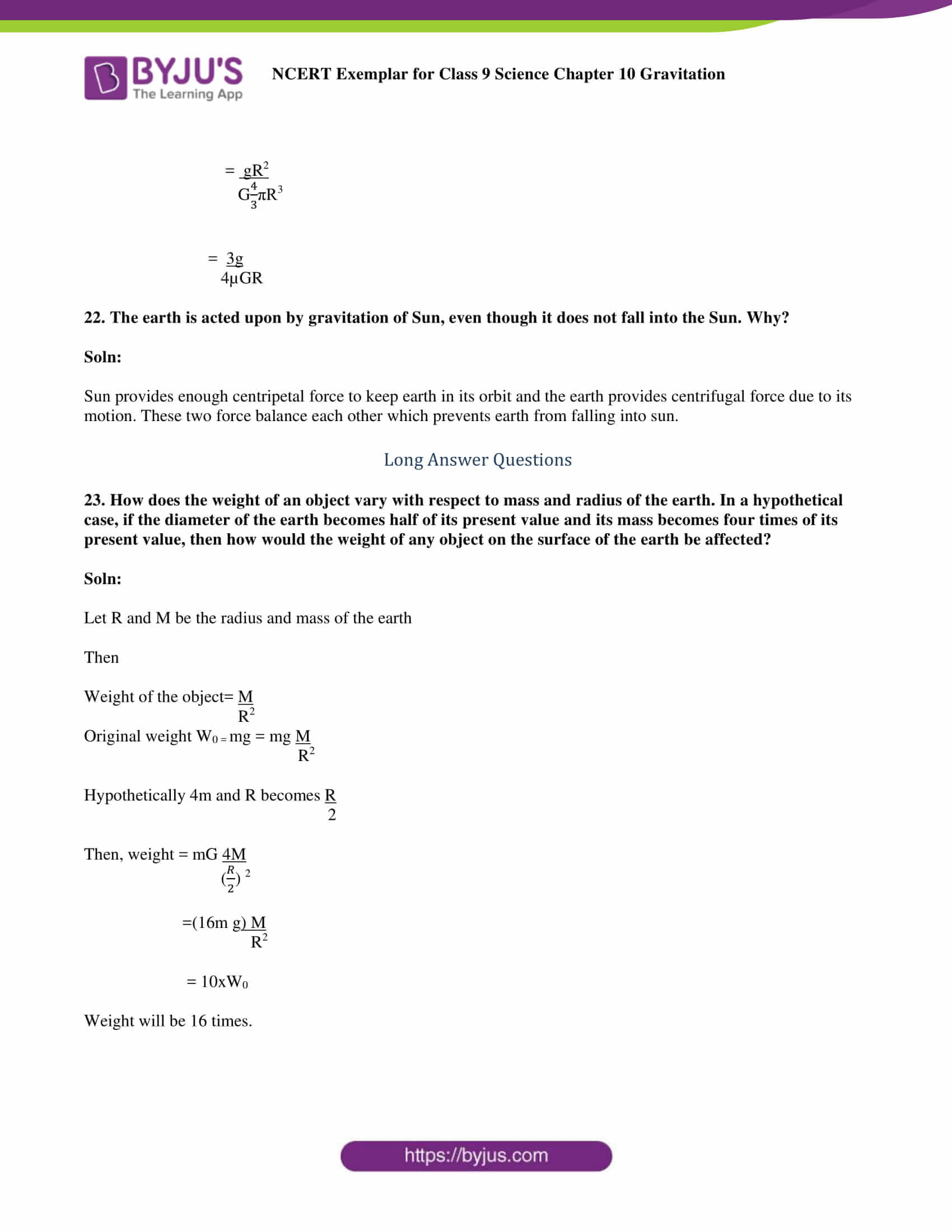 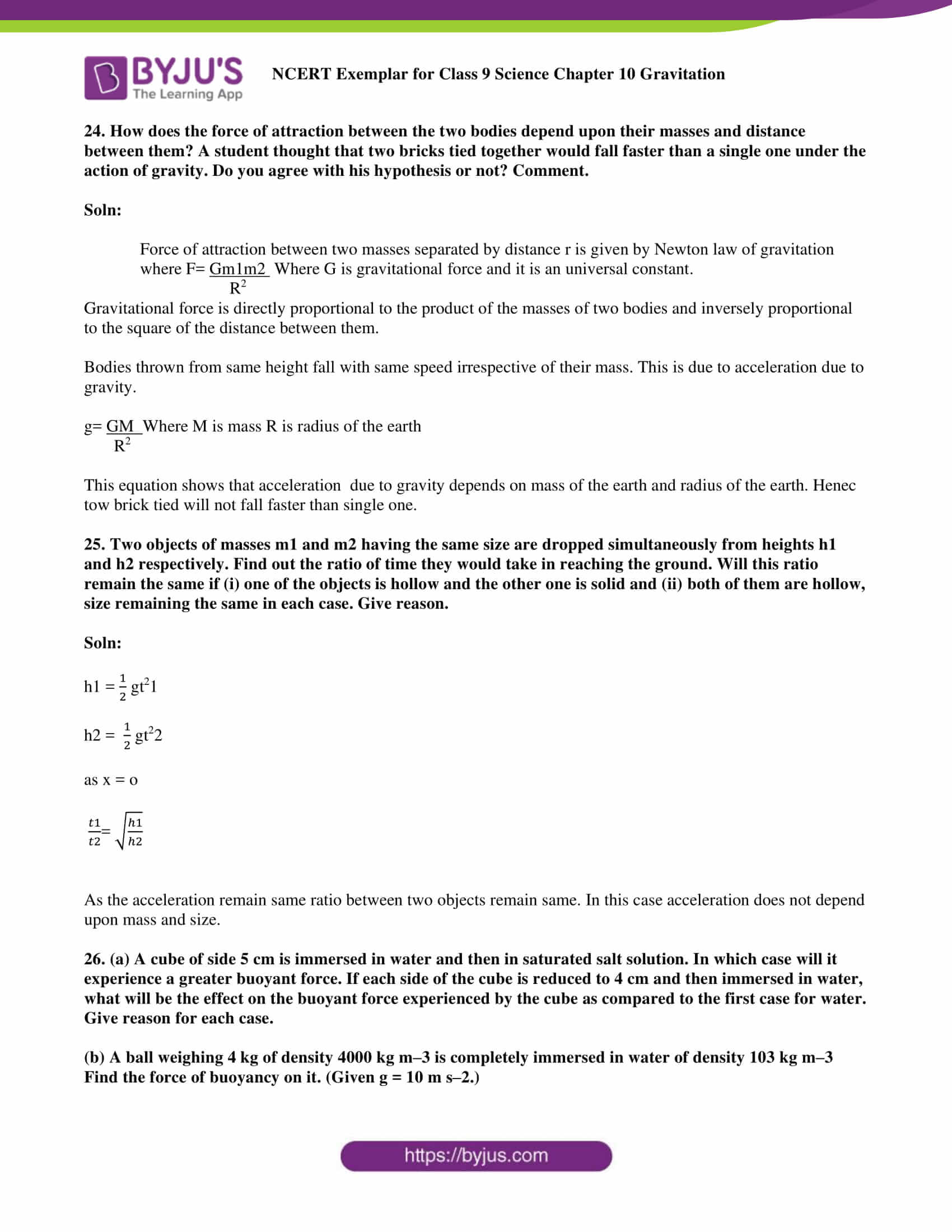 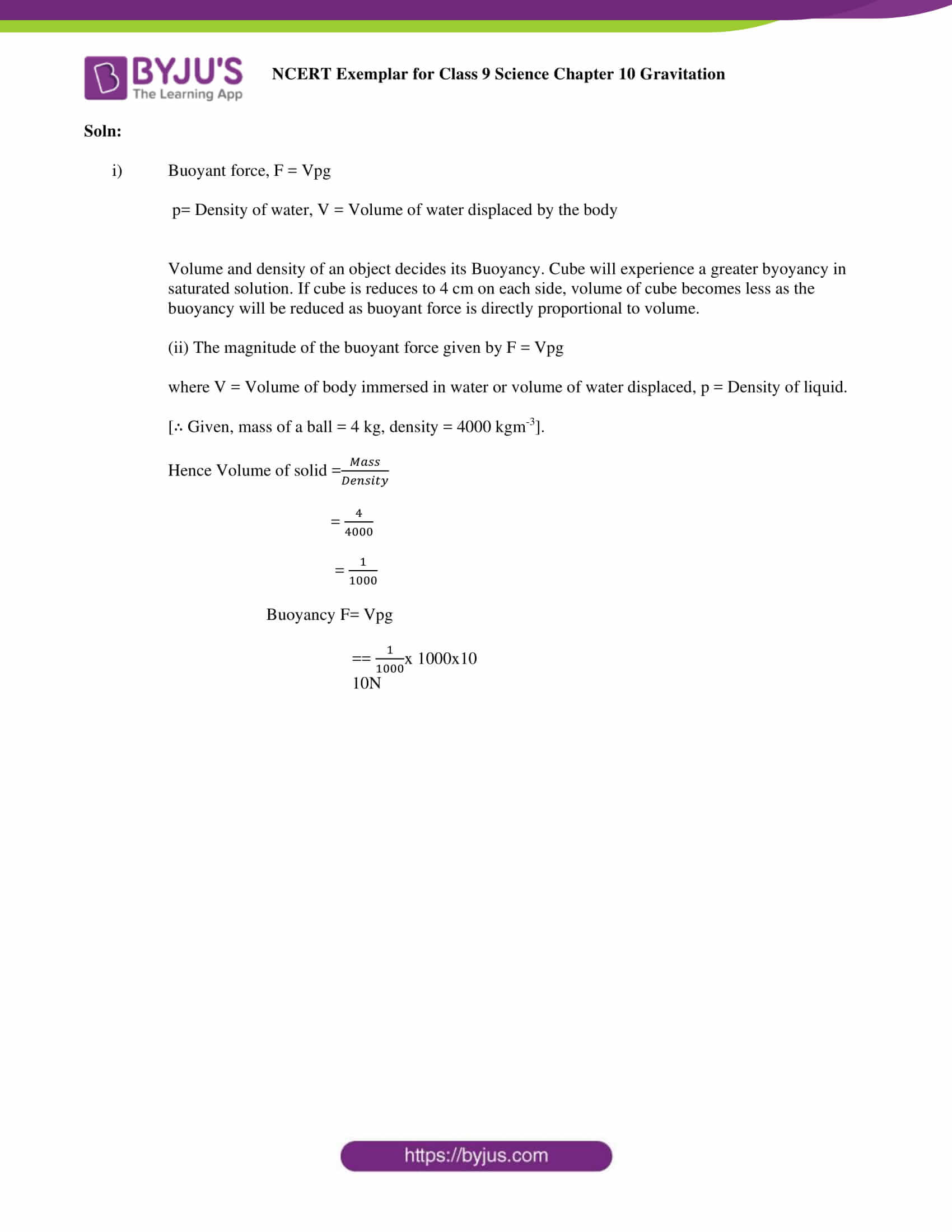 1. Two objects of different masses falling freely near the surface of moon would

(a) have same velocities at any instant

(b) have different accelerations

(d) undergo a change in their inertia

Answer is (a) have same velocities at any instant

Acceleration of an object depends on acceleration due to gravity irrespective of its mass. Hence object under free fall have the same velocities.

2. The value of acceleration due to gravity

(a) is same on equator and poles

(b) is least on poles

(c) is least on equator

(d) increases from pole to equator

Answer is (c) is least on equator

The value of acceleration due to gravity is least on equator because distance between surface of the earth and its centre is more on equator than in poles.

4. A boy is whirling a stone tied with a string in an horizontal circular path. If the string breaks, the stone

(a) will continue to move in the circular path

At any instance of time object in circular motion tend to be in rectilinear motion. Object keeps on moving due to centripetal force and it moves along a straight line tangential to the circular path when strings breaks.

5. An object is put one by one in three liquids having different densities. The object floats with 12 3 , and 9 11 7 parts of their volumes outside the liquid surface in liquids of densities d1, d2 and d3 respectively. Which of the following statement is correct?

(c) is greatest at the surface of the earth

(d) is universal constant of nature

Answer is (d) is universal constant of nature

(a) the earth and a point mass only

(b) the earth and Sun only

(c) any two bodies having some mass

Answer is (c) any two bodies having some mass

8. The value of quantity G in the law of gravitation

(a) depends on mass of earth only

(b) depends on radius of earth only

(c) depends on both mass and radius of earth

(d) is independent of mass and radius of the earth

G is an universal constant hence it is independent of mass and radius of the earth.

10. The atmosphere is held to the earth by

Answer is (a) gravity

11. The force of attraction between two unit point masses separated by a unit distance is called

(b) acceleration due to gravity

12. The weight of an object at the centre of the earth of radius R is

(c) R times the weight at the surface of the earth

(d) 1/R2 times the weight at surface of the earth

Answer is (a) zero

13. An object weighs 10 N in air. When immersed fully in water, it weighs only 8 N. The weight of the liquid displaced by the object will be

14. A girl stands on a box having 60 cm length, 40 cm breadth and 20 cm width in three ways. In which of the following cases, pressure exerted by the brick will be

(a) maximum when length and breadth form the base

(b) maximum when breadth and width form the base

(c) maximum when width and length form the base

(d) the same in all the above three cases

Answer is (b) maximum when breadth and width form the base

Surface area and pressure are inversely proportional. Pressure will be maximum when surface area is minimum hence the answer is maximum when breadth and width form the base.

Netwon’s third law of motion states that for every action there is equal and opposite reaction. Hence F1 and F2 are equal.

16. What is the source of centripetal force that a planet requires to revolve around the Sun? On what factors does that force depend?

17. On the earth, a stone is thrown from a height in a direction parallel to the earth’s surface while another stone is simultaneously dropped from the same height. Which stone would reach the ground first and why?

Both the stones reach the ground simultaneously as they are dropped from the same height and their initial velocity will be the same.

18. Suppose gravity of earth suddenly becomes zero, then in which direction will the moon begin to move if no other celestial body affects it?

If there is no gravitational pull from the earth, the moon starts to move in a straight line tangent to its circular path.

19. Identical packets are dropped from two aeroplanes, one above the equator and the other above the north pole, both at height h. Assuming all conditions are identical, will those packets take same time to reach the surface of earth. Justify your answer.

Weight of person on moon = 1/6th of weight on earth

If he can lift a certain mass ‘m’ by applying the same force on moon, then

21. Calculate the average density of the earth in terms of g, G and R.

22. The earth is acted upon by gravitation of Sun, even though it does not fall into the Sun. Why?

Sun provides enough centripetal force to keep the earth in its orbit and the earth provides centrifugal force due to its motion. These two forces balance each other which prevents the earth from falling into the sun.

Weight of the object = M/R2

Weight will be 16 times.

24. How does the force of attraction between the two bodies depend upon their masses and distance between them? A student thought that two bricks tied together would fall faster than a single one under the action of gravity. Do you agree with his hypothesis or not? Comment.

The hypothesis is incorrect. Force of attraction between two masses separated by distance r is given by Newton law of gravitation where F= Gm1m2/R2 Where G is gravitational force and it is an universal constant.

Bodies thrown from same height fall with same speed irrespective of their mass. This is due to acceleration due to gravity.

This equation shows that acceleration due to gravity depends on the mass of the earth and radius of the earth. Hence tow brick tied will not fall faster than the single one.

25. Two objects of masses m1 and m2 having the same size are dropped simultaneously from heights h1 and h2 respectively. Find out the ratio of time they would take in reaching the ground. Will this ratio remain the same if (i) one of the objects is hollow and the other one is solid and (ii) both of them are hollow, size remaining the same in each case. Give reason.

p = Density of water, V = Volume of water displaced by the body

Volume and density of an object decides its Buoyancy. Cube will experience a greater buoyancy in a saturated solution. If the cube is reduced to 4 cm on each side, the volume of cube becomes less as the buoyancy will be reduced as buoyant force is directly proportional to volume.

(ii) The magnitude of the buoyant force given by F = Vpg

where V = Volume of body immersed in water or volume of water displaced, p = Density of liquid.

With BYJU’S students can excel in their exam. BYJU’S modern learning approach will guide you in understanding the concepts clearly and also helps you in solving the questions easily. You can get all the study materials along with NCERT Exemplar provided by us by registering with BYJU’S or by downloading BYJU’S Learning App.

Yes, BYJU’S provides the NCERT Exemplar Solutions for Class 9 Science Chapter 10 in PDF format which can be downloaded by the students. These reference materials from BYJU’S are hassle free and help students to score well in the Class 9 exams. The PDF’s created by the experts are of high quality and the free download links can be used by the students to access them.

What are the uses of referring to BYJU’S NCERT Exemplar Solutions for Class 9 Science Chapter 10?

The uses of referring to BYJU’S NCERT Exemplar Solutions for Class 9 Science Chapter 10 are –
1. Each answer has a comprehensive explanation to help students understand the concepts.
2. The solutions are strictly based on the syllabus designed by the CBSE board.
3. The chapter wise solutions are accurate and genuine to improve the problem solving skills among students.
4. PDFs of solutions are available for free download which can be downloaded and referred to by the students.

What are the topics covered in the NCERT Exemplar Solutions for Class 9 Science Chapter 10?

The topics covered in the NCERT Exemplar Solutions for Class 9 Science Chapter 10 are –
1. Gravitation
2. Importance of the universal law of gravitation
a. To calculate the value of g
b. The motion of objects under the influence of the gravitational force of the
3. Mass-Weight
a. The weight of an object on the moon
4. Thrust and Pressure
a. Pressure in fluids
b. Buoyancy
c. Why do objects float or sink when placed on the surface of the water?
5. Archimedes’ Principle
6. Relative Density.
Also, Read