NCERT Exemplar solution for class 9 science Chapter 1 Matter in Our Surrounding is provided here for the benefit of the students. Studying NCERT Exemplar solution will give you in-depth knowledge of the concepts involved in chapter our surrounding. The NCERT exemplar questions are designed in such a way that students can learn all the basic and advanced concepts of the chapter matter in our surroundings in a better way and easy way.

This Exemplar solution has answers to the questions provided in NCERT Exemplar book. It has 10 multiple choice questions, 12 short answer questions and 5 long answer question of varied difficulty which will help you to face the exam confidently. 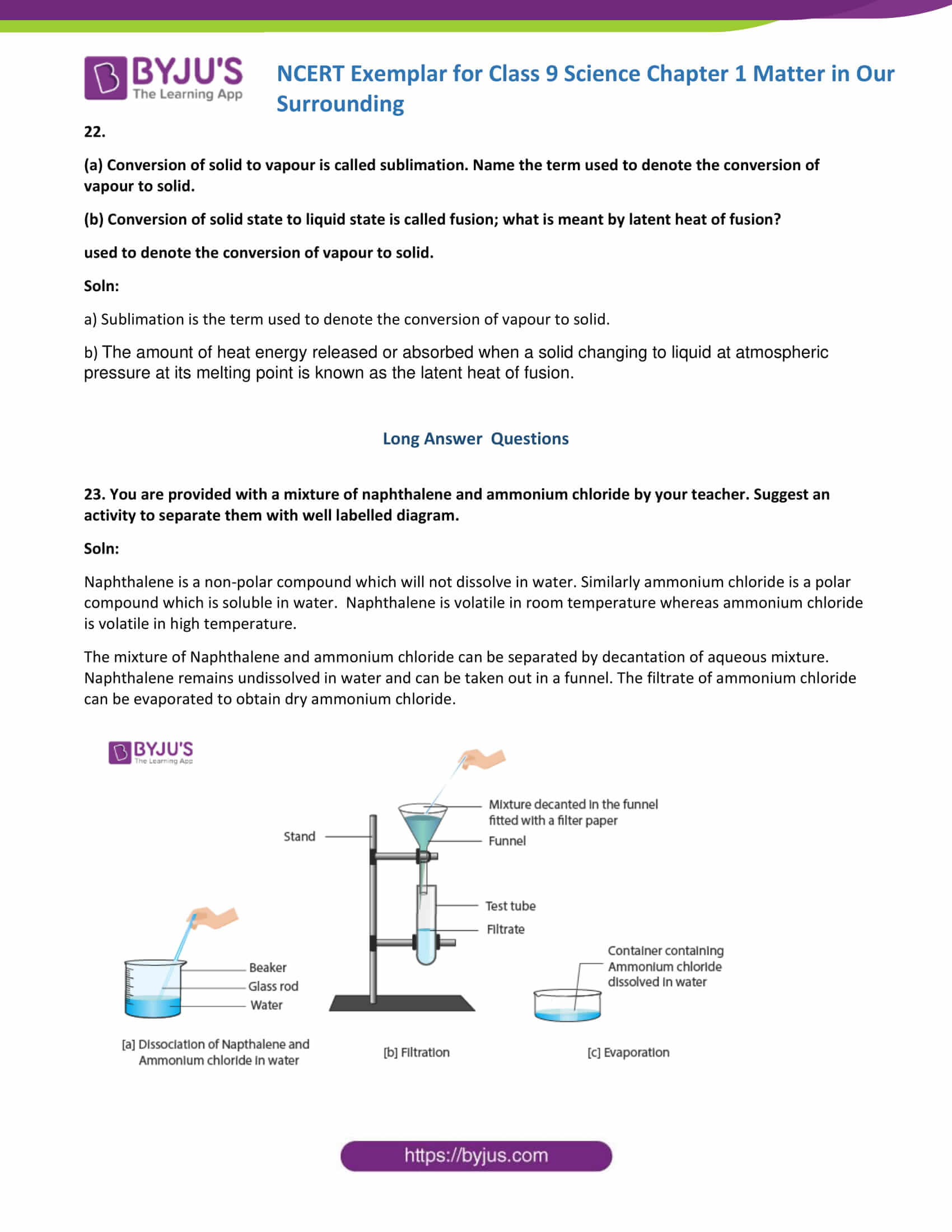 1. Which one of the following sets of phenomena would increase on raising the temperature?

(a) Diffusion, evaporation, compression of gases

(b) Evaporation, compression of gases, solubility

Answer is c) Evaporation, diffusion and expansion of gases

Evaporation means conversion of liquid state into vapour state. When we increase temperature molecules move and vibrate so quickly that they escape into the atmosphere in the form of vapours.

Increase in temperature causes the molecules move faster this results in expansion of gases.

2. Seema visited a Natural Gas Compressing Unit and found that the gas can be liquefied under specific conditions of temperature and pressure. While sharing her experience with friends she got confused. Help her to identify the correct set of conditions

To compress gas into liquid, low temperature and high pressure are required. Between the particles of gas there is a lot of space. On applying pressure, particles get closer and they start attracting each other to form a liquid. A lot of heat is generated when gas is compresses hence it is necessary to cool it. Cooling lowers the temperature of compressed gas and helps in liquefying it.

3. The property to flow is unique to fluids. Which one of the following statements is correct?

(d) Only liquids are fluids

Answer is c) Gases and liquids behave like fluids

In gases and liquids intermolecular force of attraction between the particles is less and they facilitate flow of these states of matter.

4. During summer, water kept in an earthen pot becomes cool because of the phenomenon of

Evaporation of water through pores of earthen pot reduces temperature of immediate surroundings. This makes the water cool after some time.

Movement of water through plants and evaporation through its aerial parts is called transpiration.

If molecules of a solvent tend to pass through a semipermeable membrane from a less concentrated solution into a more concentrated one it is called osmosis.

5. A few substances are arranged in the increasing order of ‘forces of attraction’ between their particles. Which one of the following represents a correct arrangement?

6. On converting 25°C, 38°C and 66°C to kelvin scale, the correct sequence of temperature will be

7. Choose the correct statement of the following

(a) Conversion of solid into vapours without passing through the liquid state is called sublimation.

(b) Conversion of vapours into solid without passing through the liquid state is called vaporisation.

(c) Conversion of vapours into solid without passing through the liquid state is called freezing.

(d) Conversion of solid into liquid is called sublimation.

Answer is a) Conversion of solid into vapours without passing through the liquid state is called sublimation.

8. The boiling points of diethyl ether, acetone and n-butyl alcohol are 35°C, 56°C and 118°C respectively. Which one of the following correctly represents their boiling points in kelvin scale?

Temperature in Celsius can be converted into temperature in kelvin by adding 273 to the Celsius value. Boiling points of diethyl ether, acetone and n-butyl alcohol are 308 K, 329 K, and 391 K respectively.

9. Which condition out of the following will increase the evaporation of water?

(a) Increase in temperature of water

(b) Decrease in temperature of water

Answer is a) Increase in temperature of water

When common salt is added to water then surface is occupied by the solvent as well as non-volatile solute particles.

10. In which of the following conditions, the distance between the molecules of hydrogen gas would increase?

(i) Increasing pressure on hydrogen contained in a closed container

(ii) Some hydrogen gas leaking out of the container

(iii) Increasing the volume of the container of hydrogen gas

Answer is c) ii and iii

11. A sample of water under study was found to boil at 102°C at normal temperature and pressure. Is the water pure? Will this water freeze at 0°C? Comment.

Boiling point of pure water is 100 °C and melting point is 0°C at 1 atmospheric pressure. Here the water boils at 102 °C hence it is not a pure water and freezes at temperature below 0°C.

12. A student heats a beaker containing ice and water. He measures the temperature of the content of the beaker as a function of time. Which of the following (Fig. 1.1) would correctly represent the result? Justify your choice. (a) Evaporation of a liquid at room temperature leads to a——— effect.

(b) At room temperature the forces of attraction between the particles of solid substances are———than those which exist in the gaseous state.

(d) ——— is the change of solid state directly to vapour state without going through the ———state.

(e) The phenomenon of change of a liquid into the gaseous state at any temperature below its boiling point is called———.

(a) — (iv) Degree Celsius and kelvin are the units of temperature.

(b) — (iii) Centimetre and metre are the units of length.

(c) — (v) Gram per centimetre cube and kilogram per metre cube are the units of density.

(e) – (i) Milligram and kilogram are the units of mass.

17. Classify the following into osmosis/diffusion

(a) Swelling up of a raisin on keeping in water.

(b) Spreading of virus on sneezing.

(c) Earthworm dying on coming in contact with common salt.

(f) Spreading of smell of cake being baked throughout the house.

b) Microscopic virus gets diffused in air.

c) Because of variations in concentration of water and solute. When salt is sprinkled on them their skin gets dried due to osmosis due to which their body shrinks and they die.

d) Since grapes are placed in a hypertonic solution, the water from the grapes move out due to exosmosis. This results in the shrinkage of grapes.

e) Salt draws water out of the cells of the microorganisms, thereby, preventing their growth. It also produces lactic acid during anaerobic fermentation and prevents them from spoilage.

g) Fish absorb oxygen from the water through gills and skin by the process of osmosis.

18. Water as ice has a cooling effect, whereas water as steam may cause severe burns. Explain these observations.

Water as steam has more latent heat as compared to water as solid and liquid. Hence it causes severe burns while water as ice causes cooling effect.

19. Alka was making tea in a kettle. Suddenly she felt intense heat from the puff of steam gushing out of the spout of the kettle. She wondered whether the temperature of the steam was higher than that of the water boiling in the kettle. Comment.

Steam and the temperature of water boiling in the kettle is the same. But the particles of steam have more energy in the form of latent heat of vaporisation than the particles of water. This energy is released when the steam condenses to water. Therefore, steam is hotter than the boiling water.

20. A glass tumbler containing hot water is kept in the freezer compartment of a refrigerator (temperature < 0°C). If you could measure the temperature of the content of the tumbler, which of the following graphs (Fig.1.2) would correctly represent the change in its temperature as a function of time. Graph (a) is the right answer because water will cool initially till its temperature reaches 0 °C. After reaching freezing point (0 °C) temperature will remain constant till the water becomes ice. After that point temperature would decrease again.

21. Look at Fig. 1.3 and suggest in which of the vessels A,B, C or D the rate of evaporation will be the highest? Explain.

(a) Conversion of solid to vapour is called sublimation. Name the term used to denote the conversion of vapour to solid.

(b) Conversion of solid state to liquid state is called fusion; what is meant by latent heat of fusion?

used to denote the conversion of vapour to solid.

a) Deposition is the term used to denote the conversion of vapour to solid.

b) The amount of heat energy released or absorbed when a solid changes to liquid at atmospheric pressure at its melting point is known as the latent heat of fusion.

23. You are provided with a mixture of naphthalene and ammonium chloride by your teacher. Suggest an activity to separate them with well-labelled diagram. 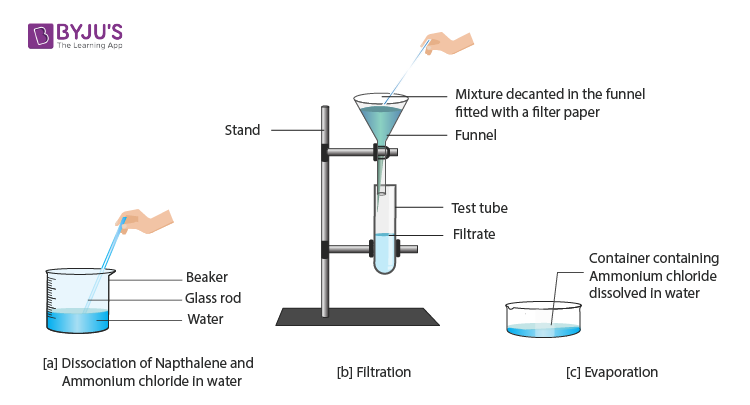 24. It is a hot summer day, Priyanshi and Ali are wearing cotton and nylon clothes respectively. Who do you think would be more comfortable and why?

Hot summer leads to a lot of sweating. Cotton absorbs moisture whereas Nylon will not absorb the moisture as efficiently as cotton does. Hence cotton absorbs the sweat faster that Nylon does. Evaporation of moisture from the cotton cloth will give a cool feeling, especially when the wind blows. Hence, it can be concluded that Priyanshi will be more comfortable in summer days.

25. You want to wear your favourite shirt to a party, but the problem is that it is still wet after a wash. What steps would you take to dry it faster?

Drying of clothes is due to process of evaporation hence following steps should be taken to dry the shirt faster.

(b) Rate of evaporation of an aqueous solution decreases with increase in humidity.

(c) Sponge though compressible, is a solid.

a) When liquid evaporates it takes latent heat from the object it touches. This will make the object cooler. Hence evaporation causes cooling.

c) Sponge is a solid because it has definite shape and volume which does not change until you press it. It has minute pores in which air is filled. When you press it, air passes out through pores this makes it a compressible solid.

27. Why does the temperature of a substance remain constant during its melting point or boiling point?

In the same way during formation of vapours latent heat helps solid substance to convert into gaseous state. Hence temperature of a substance remain constant at boiling point.

To get good marks in the class 9 examination and to lay a greater foundation for the topics to be studied in future, students are advised to have a look at this NCERT Exemplar. Students who study this exemplar thoroughly will score handsomely in examinations and can understand the higher topics with ease. For Study material, NCERT Solutions, sample papers and notes of all the subjects and classes visit BYJU’S website or download BYJU’S Learning App.

Frequently Asked Questions on Matter In Our Surroundings

What effect leads to Evaporation of a liquid at room temperature ?

Why ‘Osmosis is a special kind of diffusion’ ?

Why does the temperature of a substance remain constant during its melting point or boiling point ?

The temperature of a substance remains constant during melting and boiling points till the completion of melting and boiling because of latent heat of fusion used by the substances. Latent heat of fusion helps to overcome the force of attraction between particles of solid to change into liquid when they melt. Hence temperature remains constant. I the same way during formation of vapours latent heat helps solid substance to convert into gaseous state. Hence temperature of a substance remain constant at boiling point.