This chapter is about cell which is a fundamental unit of life. Every organism living on this planet is made of the cell which is often called as building blocks of life. After reading the whole chapter, students are advised to solve the higher order thinking questions from the NCERT Exemplar Science Class 9 Chapter 5 the Fundamental Unit of Life. Visit the below link to get free PDF of NCERT exemplar for Class 9 Chapter 5. 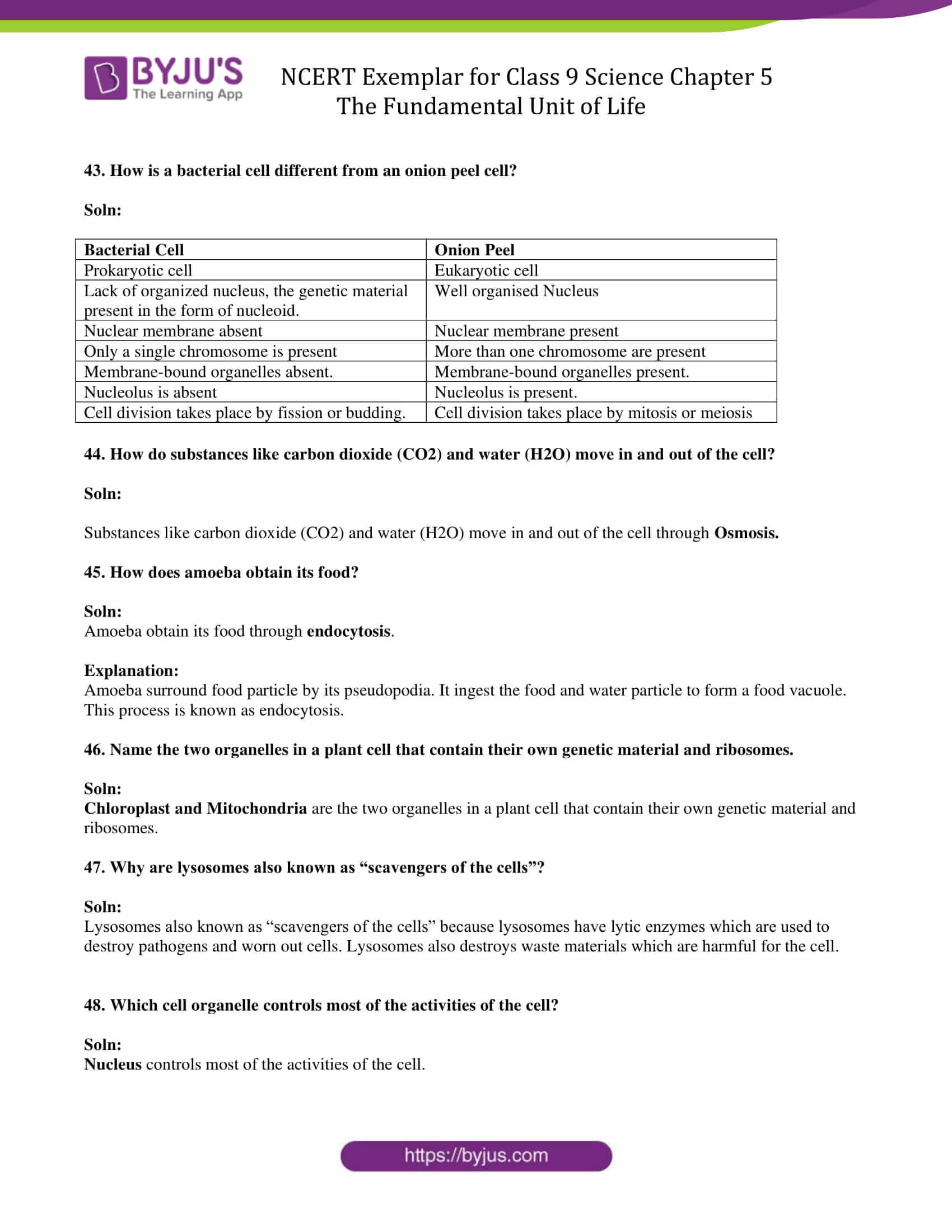 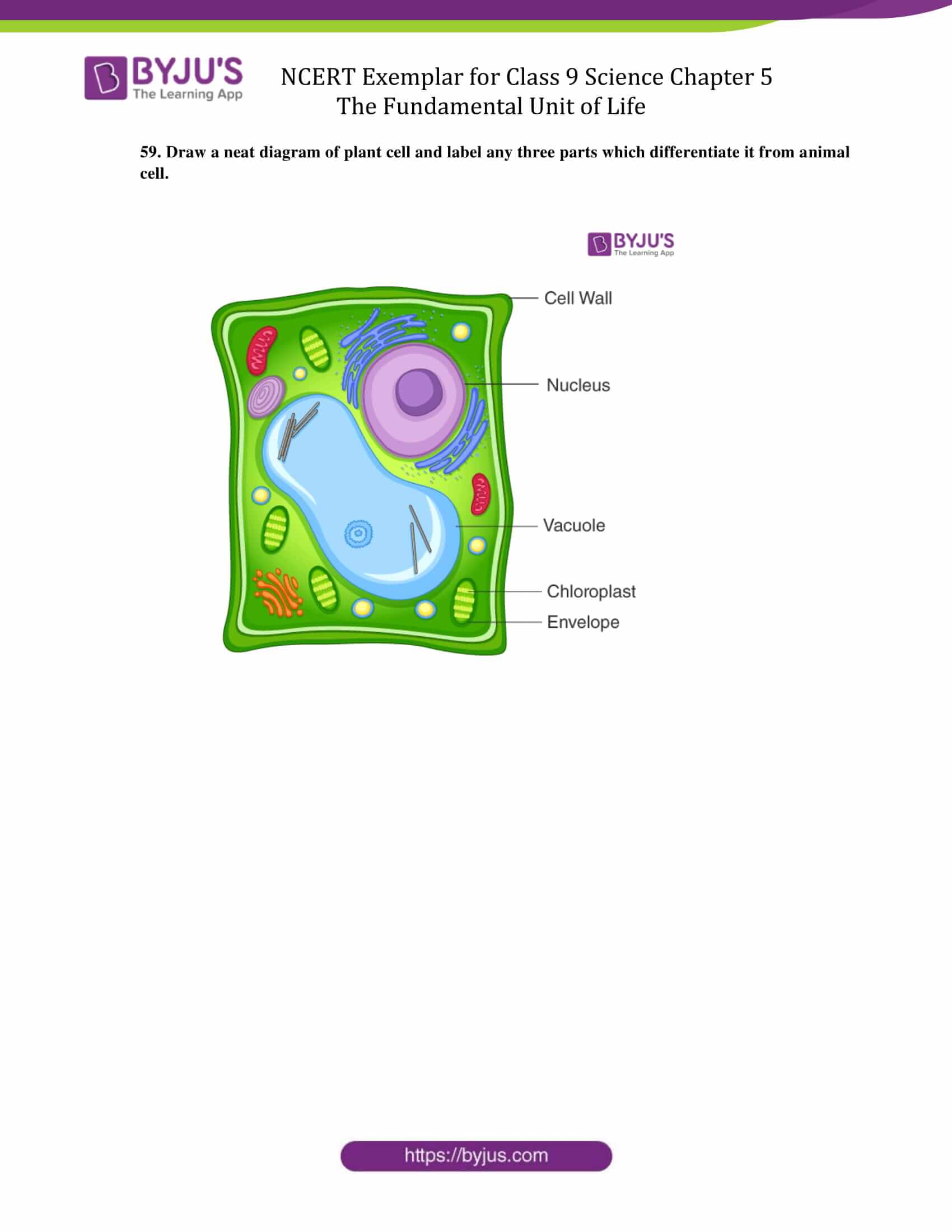 30. Why are lysosomes known as ‘suicide-bags’ of a cell?
Soln:
Lysosomes are the organelles that have digestive enzymes. When lysosomes burst, the digestive enzymes released start digesting its own cells. That is why they are known as suicidal bags.
31. Do you agree that “A cell is a building unit of an organism”? If yes, explain why?
Soln:
Yes, cells are the building unit of an organism. Cells performing similar functions join together to form tissues, which further forms organs and organ systems. This forms an organism. In a unicellular organism, a single cell performs all the life processes.
32. Why does the skin of your finger shrink when you wash clothes for a long time?
Soln:
Soap solution is hypertonic in nature which makes the water move out of the cells in your hand which results in shrinkage of fingers when you wash clothes for a long time.
33. Why is endocytosis found in animals only?
Soln:
Endocytosis is found only in animals because the cell wall is absent in animals. Due to this, the movement of substances inside the cell is easier in animals than in plants.
34. A person takes concentrated solution of salt, after sometime, he starts vomiting. What is the phenomenon responsible for such situation? Explain.
Soln:
Upon consuming salt solution Osmosis process takes place which results in dehydration. This is the reason for vomiting of the person who consumes salt solution.
35. Name any cell organelle which is non-membranous.
Soln:
The ribosome is the only non-membranous cell organelle.
36. We eat food composed of all the nutrients like carbohydrates, proteins, fats, vitamins, minerals and water. After digestion, these are absorbed in the form of glucose, amino acids, fatty acids, glycerol etc. What mechanisms are involved in the absorption of digested food and water?
Soln:
Absorption and digestion involve diffusion and osmosis, respectively.
37. If you are provided with some vegetables to cook, you generally add salt to the vegetables during the cooking process. After adding salt, vegetables release water. What mechanism is responsible for this?
Soln:
After adding salt, vegetables release water due to the process of osmosis. The addition of salt makes the external environment hypertonic. This means that the concentration of water outside is lowered as compared to the concentration of water inside the cell. This results in the elimination of water from the vegetables due to exosmosis.
38. If cells of onion peel and RBC are separately kept in hypotonic solution, what among the following will take place? Explain the reason for your answer.
(a) Both the cells will swell.
(b) RBC will burst easily while cells of onion peel will resist the bursting to some extent.
(c) a and b both are correct.
(d) RBC and onion peel cells will behave similarly.
Soln:
(c) a and b both are correct.
Explanation:
When the surrounding medium is hypotonic water moves inside the cell. This leads to the swelling of cells. RBCs do not have a plasma membrane and they swell and burst easily. Plant cells have a cell wall which will prevent them from bursting.
39. Bacteria do not have chloroplast but some bacteria are photoautotrophic in nature and perform photosynthesis. Which part of the bacterial cell performs this?
Soln:
Small vesicles associated with plasma membrane are present in bacteria. These vesicles have pigment which can trap sunlight to carry photosynthesis.
40. Match the following A and B
(A) – (B)
(a) Smooth endoplasmic reticulum – (i) Amoeba (b) Lysosome – (ii) Nucleus (c) Nucleoid – (iii) Bacteria (d) Food vacuoles – (iv) Detoxification (e) Chromatin material – (v) Suicidal bag and nucleolus
Soln:
(A) – (B) (a) Smooth endoplasmic reticulum – (iv) Detoxification (b) Lysosome – (v) Suicidal bag and nucleolus (c) Nucleoid – (iii) Bacteria (d) Food vacuoles -(i) Amoeba (e) Chromatin material – (ii) Nucleus
41. Write the name of different plant parts in which chromoplast, chloroplast and leucoplast are present.
Soln:
Chromoplast is present in Flower and fruit Chloroplast is found in the leaves Leucoplast is present in the roots
42. Name the organelles which show the analogy written as under
(a) Transporting channels of the cell——
(b) Power house of the cell——
(c) Packaging and dispatching unit of the cell——
(d) Digestive bag of the cell——
(e) Storage sacs of the cell——
(f) Kitchen of the cell——
(g) Control room of the cell——
Soln:
Answers: a. Endoplasmic reticulum b. Mitochondria c. Golgi apparatus d. Lysosomes e. Vacuoles f. Chloroplast g. Nucleus
43. How is a bacterial cell different from an onion peel cell?
Soln:

53. Draw a plant cell and label the parts which
(a) determines the function and development of the cell
(b) packages materials coming from the endoplasmic reticulum
(c) provides resistance to microbes to withstand hypotonic external media without bursting
(d) is site for many biochemical reactions necessary to sustain life.
(e) is a fluid contained inside the nucleus
Soln: (a) Nucleus: It determines the function and development of the cell (b) Golgi apparatus: It packages materials coming from the endoplasmic reticulum (c) Cell wall: It provides resistance to microbes to withstand hypotonic external media without bursting (d) Cytoplasm: It is a site for many biochemical reactions necessary to sustain life. (e) Nucleoplasm: It is a fluid contained inside the nucleus
54. Illustrate only a plant cell as seen under an electron microscope. How is it different from an animal cell?
Soln: 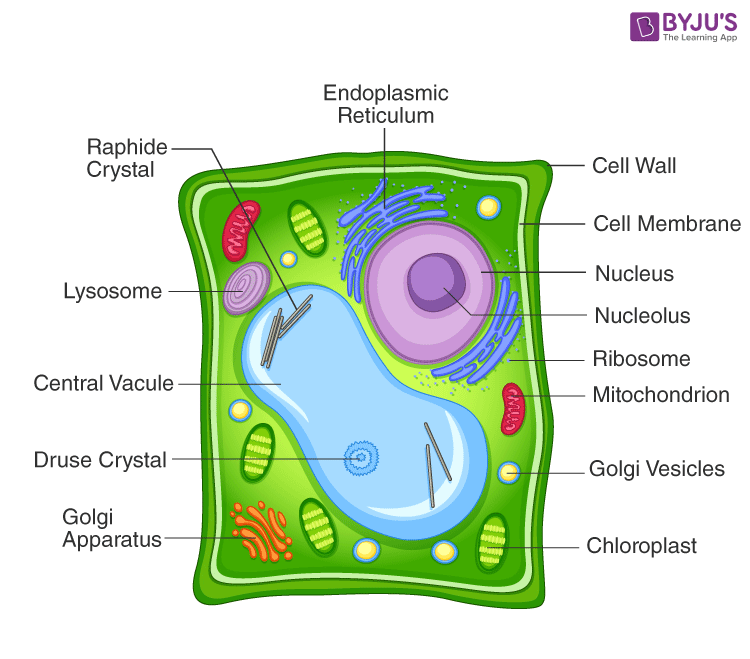 Major differences between a plant cell and animal cell are

55. Draw a neat labelled diagram of an animal cell.
Soln: 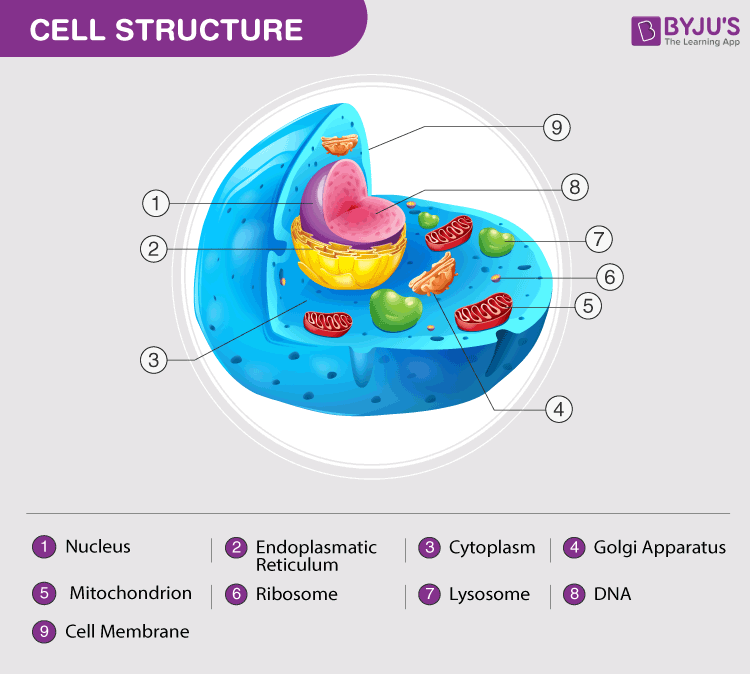 56. Draw a well-labelled diagram of a eukaryotic nucleus. How is it different from nucleoid?
Soln: The difference between the nucleus and nucleoid are given below: 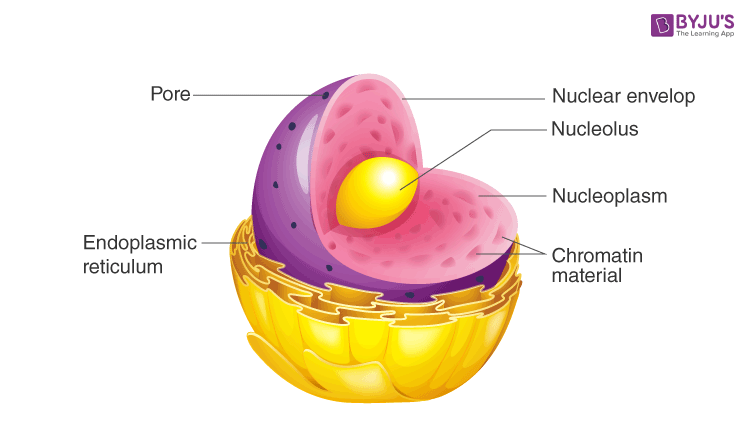 58. In brief state what happens when
(a) dry apricots are left for sometime in pure water and later transferred to sugar solution?
(b) a Red Blood Cell is kept in concentrated saline solution?
(c) the Plasma membrane of a cell breaks down?
(d) rheo leaves are boiled in water first and then a drop of sugar syrup is put on it?
(e) golgi apparatus is removed from the cell?
Soln:
a) When we put dried raisins or apricots in plain water and leave them for some time cell gains water and swells. If we put some seeds into a concentrated solution of sugar you will observe it loses water and consequently shrinks. b) When red blood cell is kept in concentrated saline solution. The cell loses water immediately and shrinks. c) When the plasma membrane of a cell breaks down, the cell dies. d) On boiling, cells of Rheo leaves die and if we put sugar solution on it there will not be any intake of water due to lack of osmosis. Here cell undergoes plasmolysis concluding only living cells undergo osmosis. e) This stop the formation of vesicles and transport of proteins and lipids is stopped by the removal of Golgi apparatus.
59. Draw a neat diagram of plant cell and label any three parts which differentiate it from an animal cell. 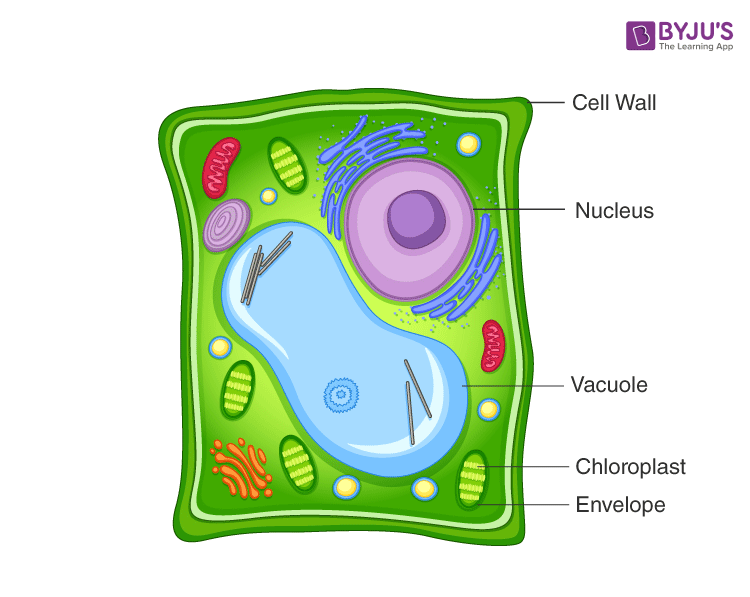 NCERT Exemplar is provided by BYJU’S to help you in understanding the topic thoroughly. The NCERT Exemplar for Chapter 5 of Class 9 is prepared by our panel of experts as per the latest CBSE Syllabus 2021-22 to assist you in understanding the Fundamental unit of Life topic in-depth. These solved exemplars help you to score good marks and also help you in remembering the topic for a longer period.

What are the concepts covered in the Chapter 5 of NCERT Exemplar Solutions for Class 9 Science?

The concepts covered in the Chapter 5 of NCERT Exemplar Solutions for Class 9 Science are –
1. Introduction
2. What are living organisms made up of?
3. What are these structures?
4. What is the cell made up of? What is the structural organisation of a cell?
5. Plasma membrane or cell membrane
6. Cell wall
7. Nucleus
8. Cytoplasm
9. Endoplasmic reticulum
10. Cell organelles
11. Golgi apparatus
12. Lysosomes
13. Mitochondria
14. Plastids
15. vacuoles

How is virus alone stored as crystal covered in the Chapter 5 of NCERT Exemplar Solutions for Class 9 Science.

Viruses are considered as the intermediates between living and non- living as they cannot metabolize or reproduce on their own For all its processes virus requires a host. Viruses can be stored as crystal-like chemicals. Virus crystals are a collection of millions of virus cells.

Why should I refer to the NCERT Exemplar Solutions for Class 9 Science Chapter 5?

1. The NCERT Exemplar Solutions are created by considering the chapterwise marks distribution as per the CBSE blueprint.
2. Elaborated solutions enable students to understand the concepts efficiently.
3. Step by step explanations are provided for the numericals present in this chapter.
4. Simplified and logical language is used in order to boost the confidence among students.
5. Pictorial representation is done wherever necessary to help students grasp concepts in a faster pace.
Also, Read