NCERT Exemplar Solution for Class 9 Science Chapter 7 Diversity in Living Organisms is an ace study material that you can rely on for your exam preparation as well as for a thorough understanding of the topic. Students are advised to solve this NCERT Exemplar together with previous year question papers and NCERT sample papers. To learn the right answers to the questions present in the textbook, students can refer to the NCERT Exemplar Solutions created by individual subject-matter experts having vast knowledge in the subject. Further, all the solutions can be accessed by students for free in both online and offline modes. 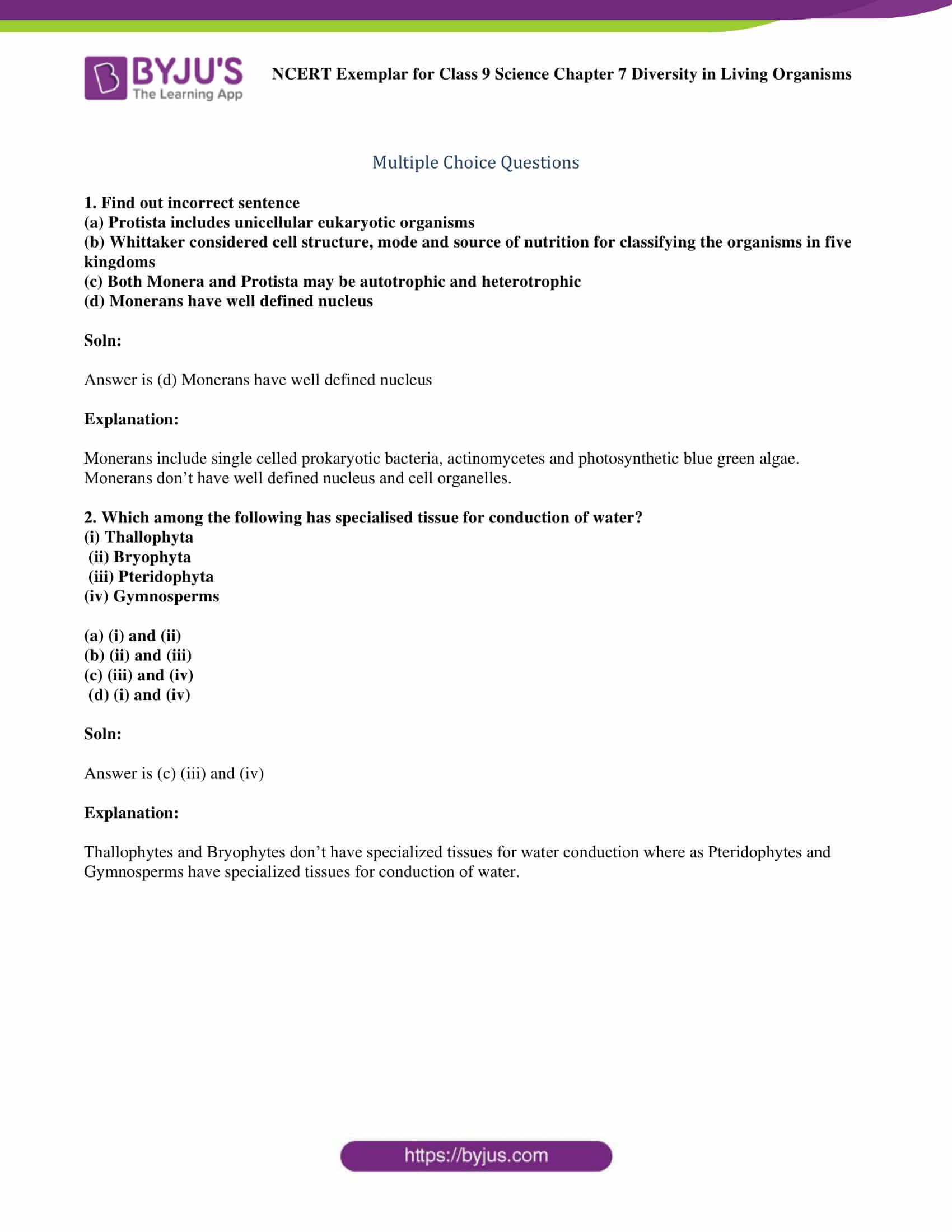 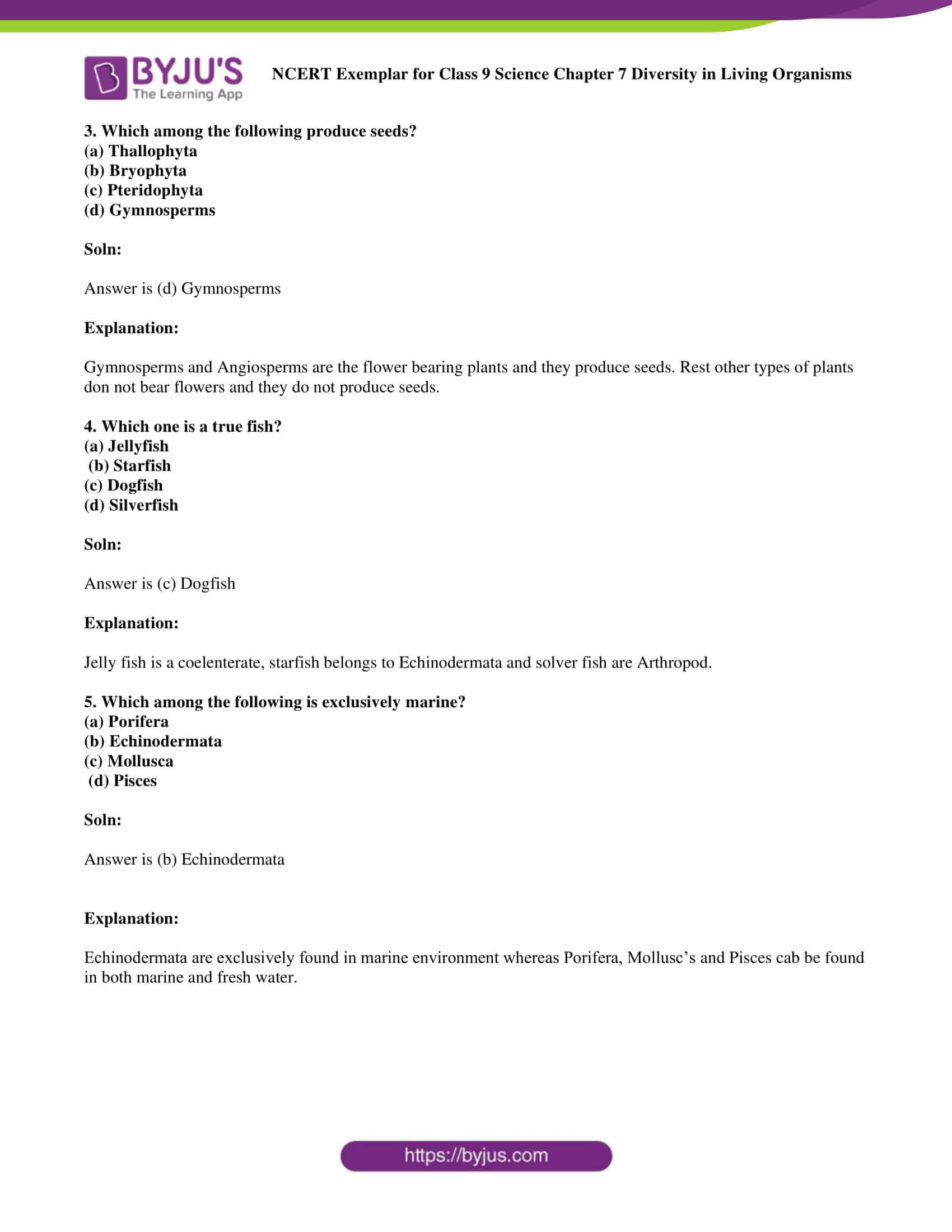 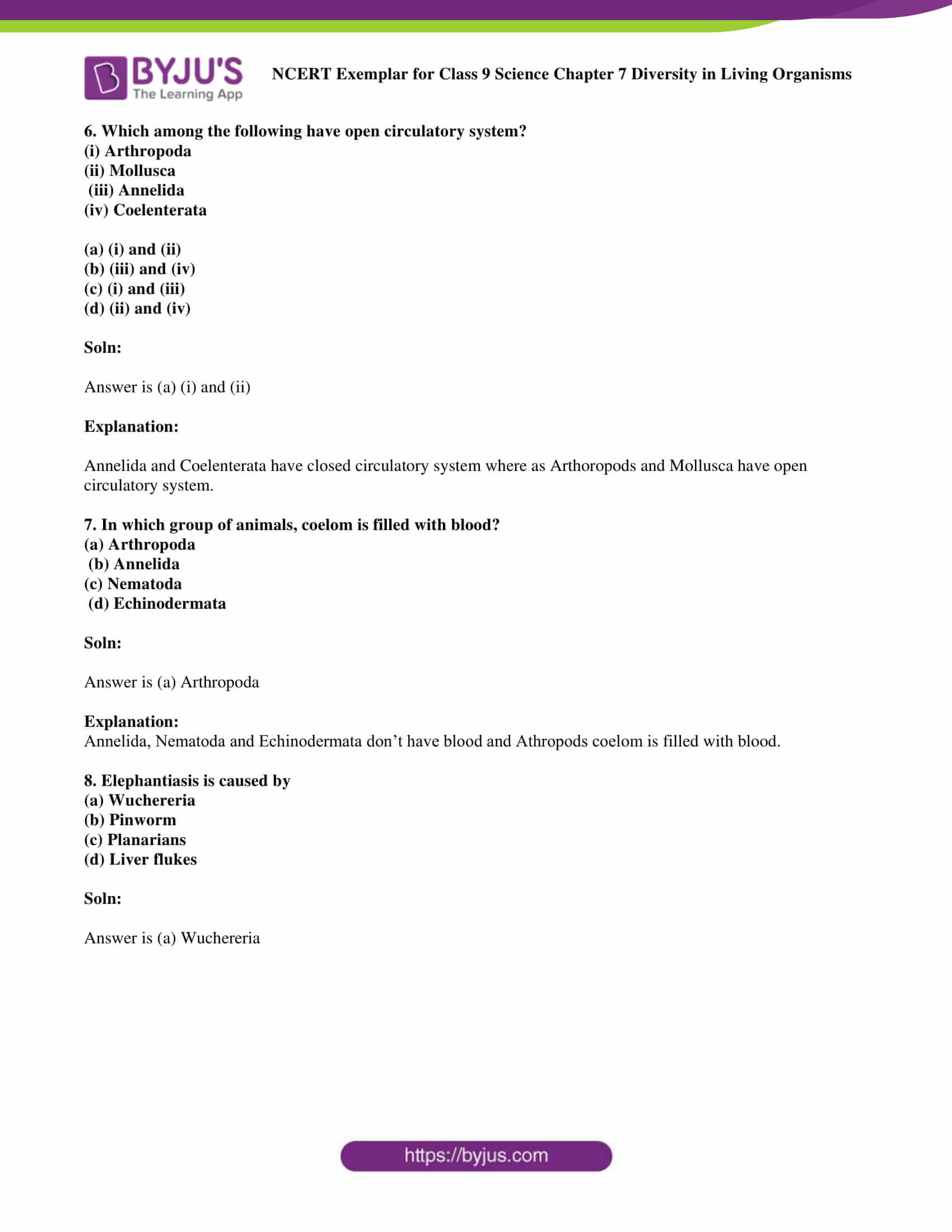 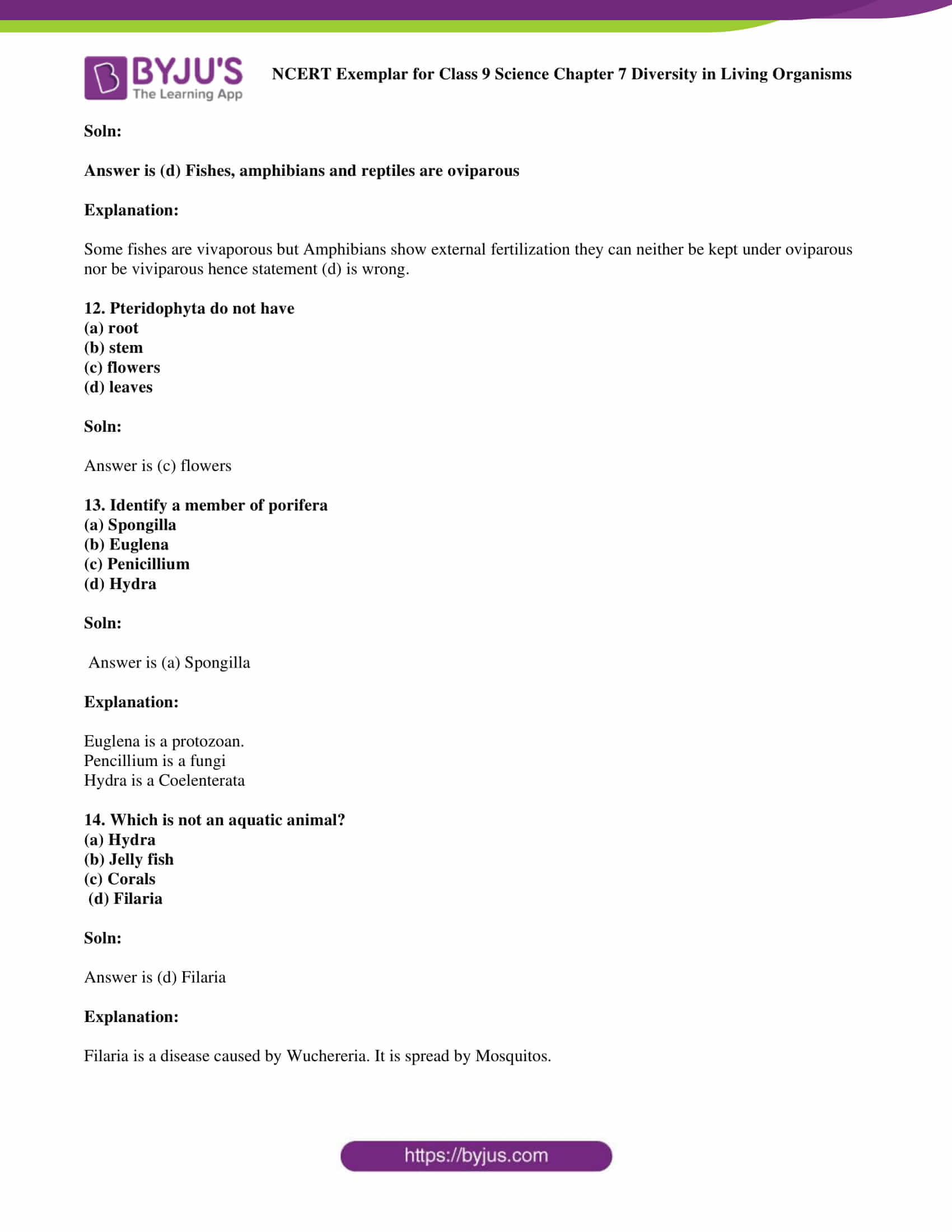 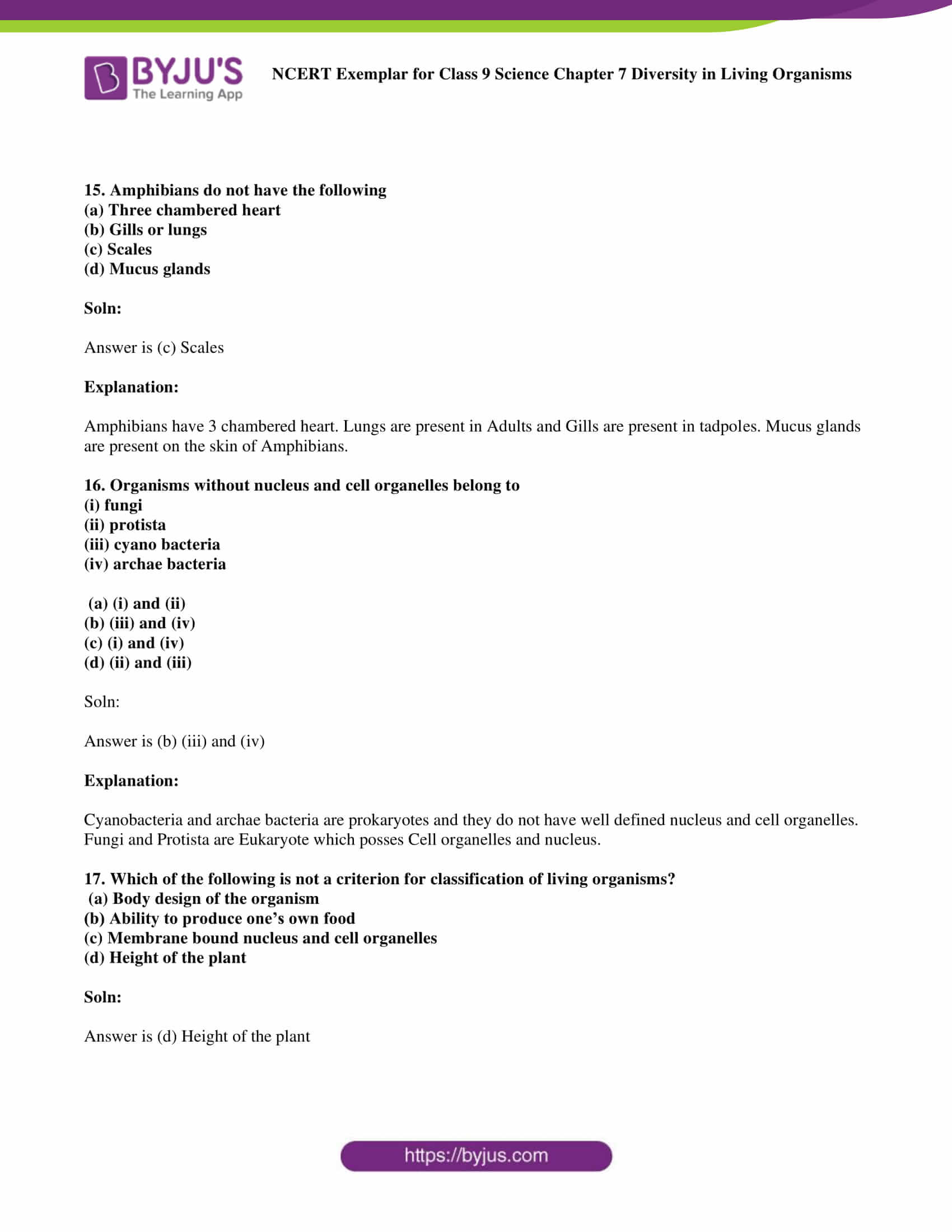 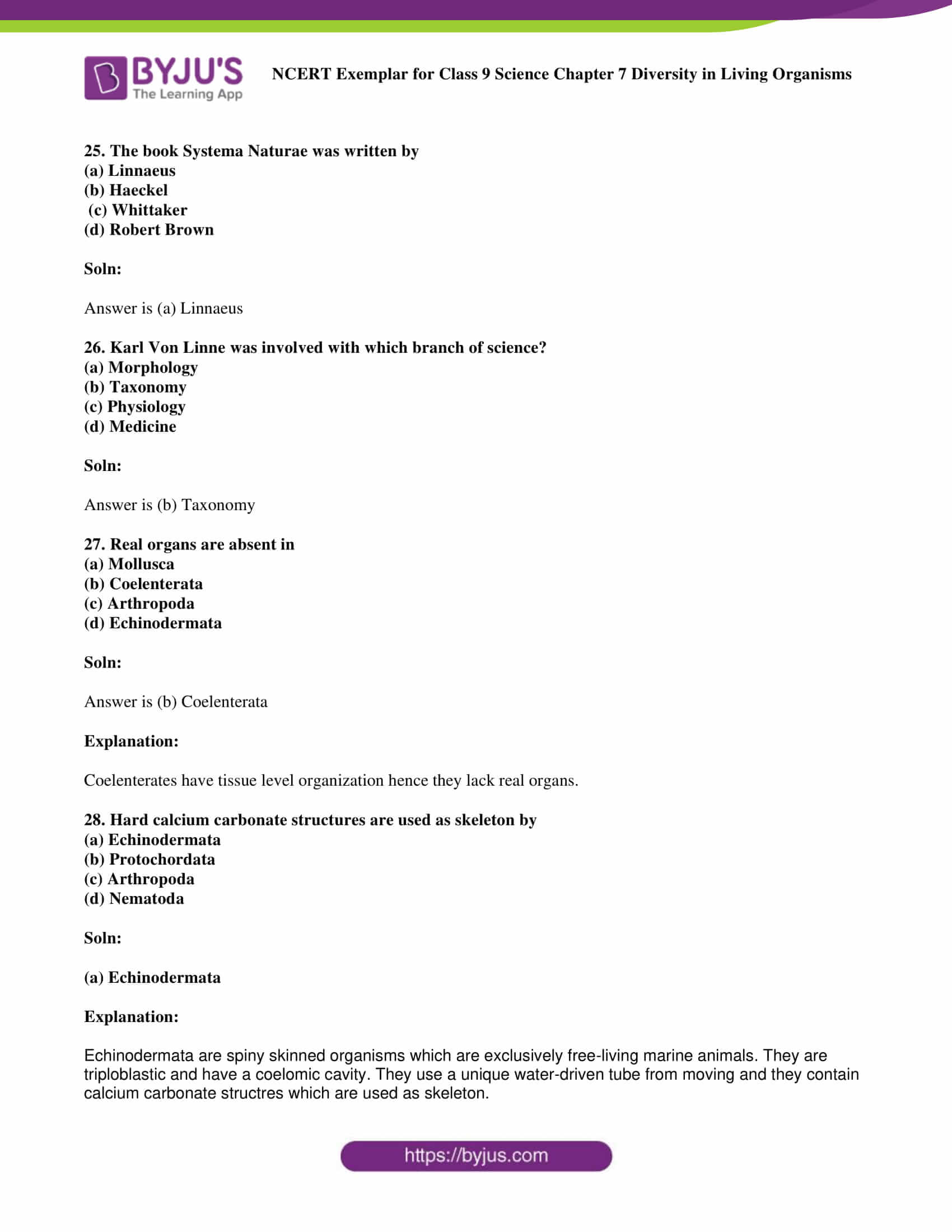 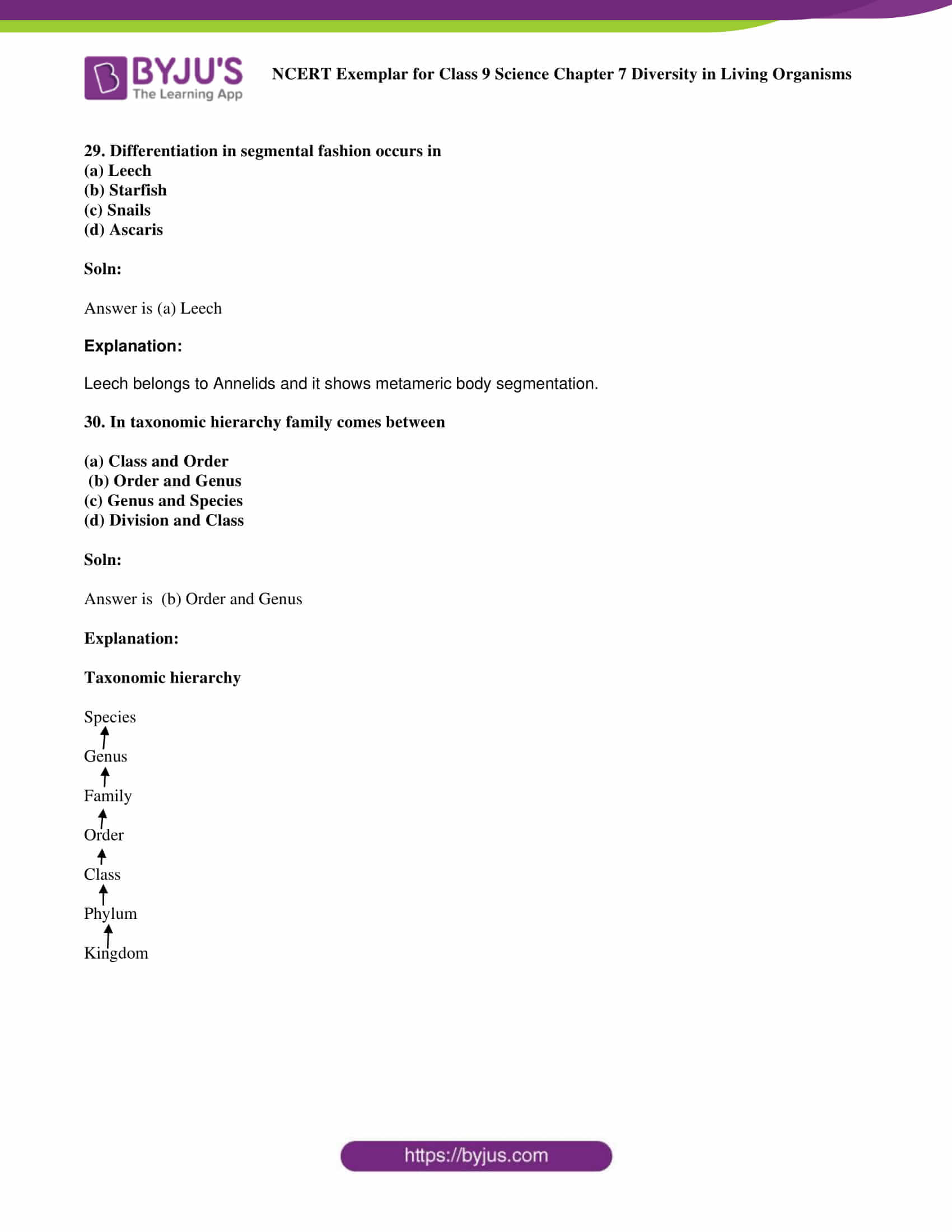 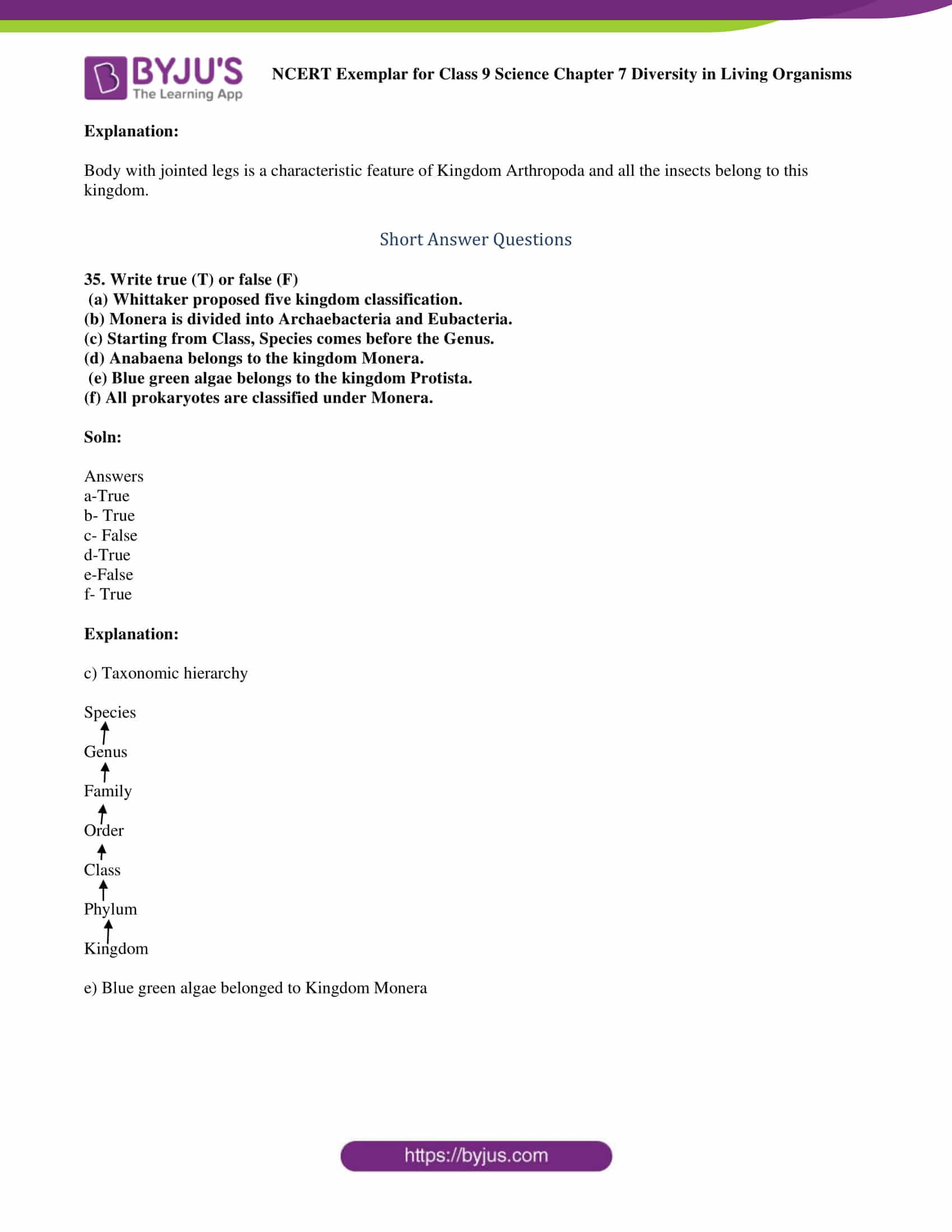 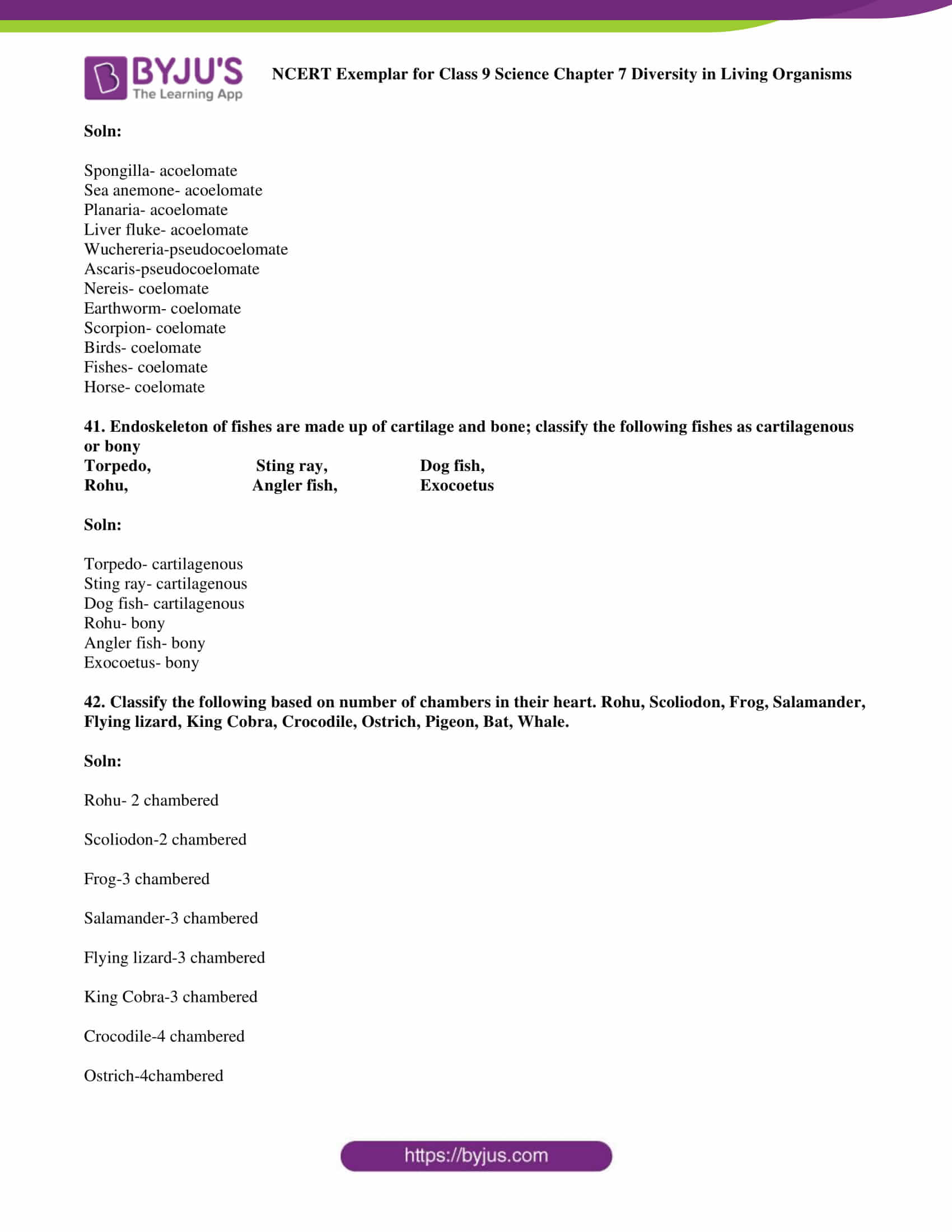 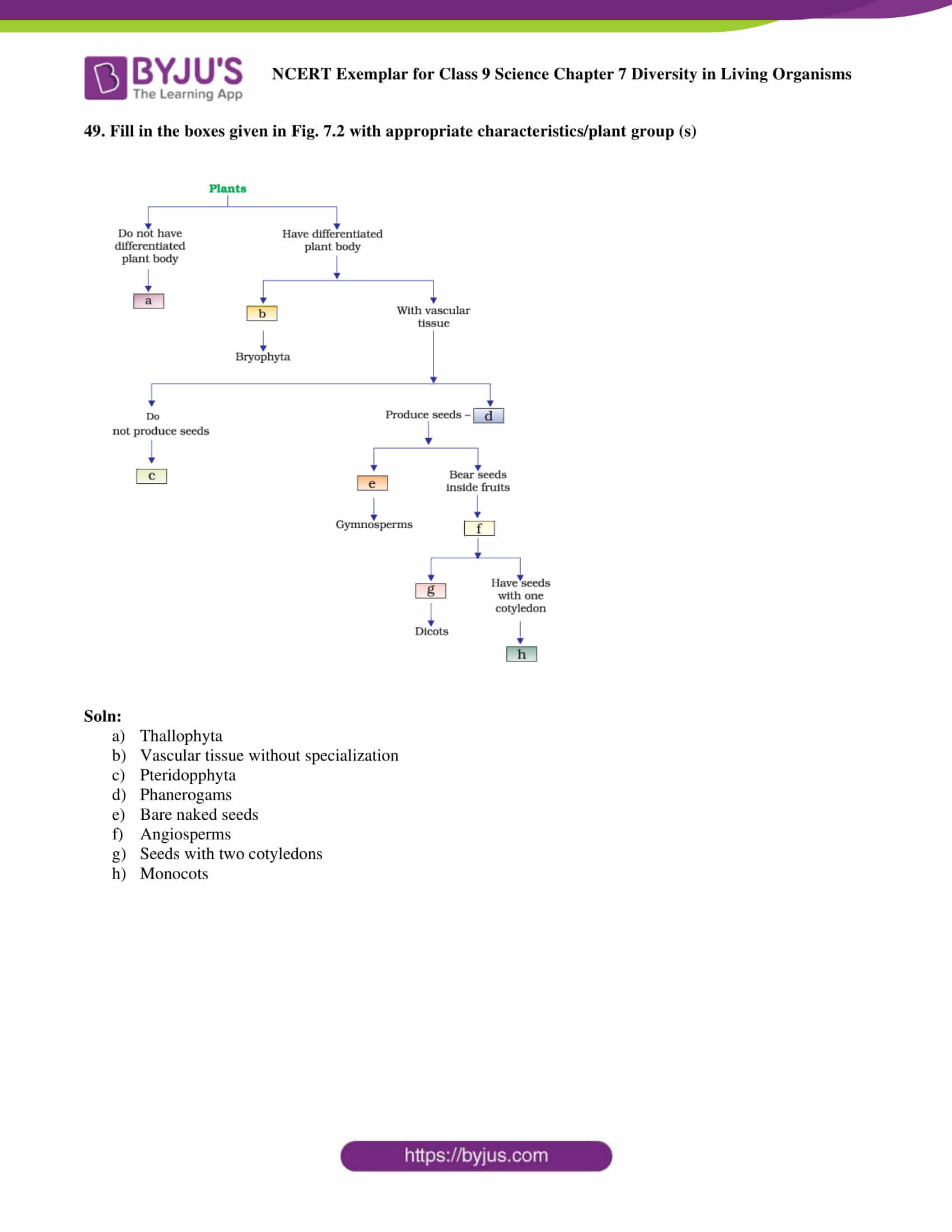 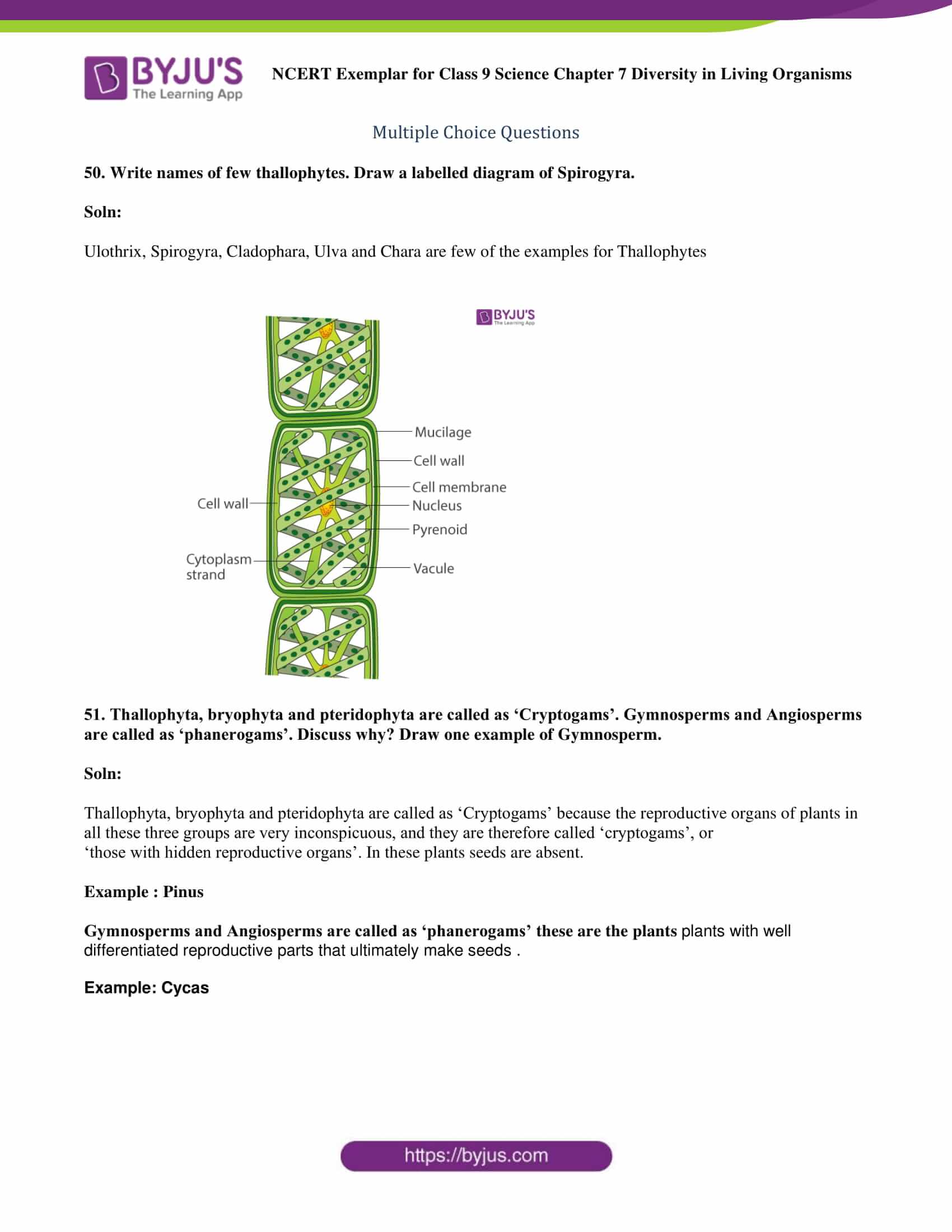 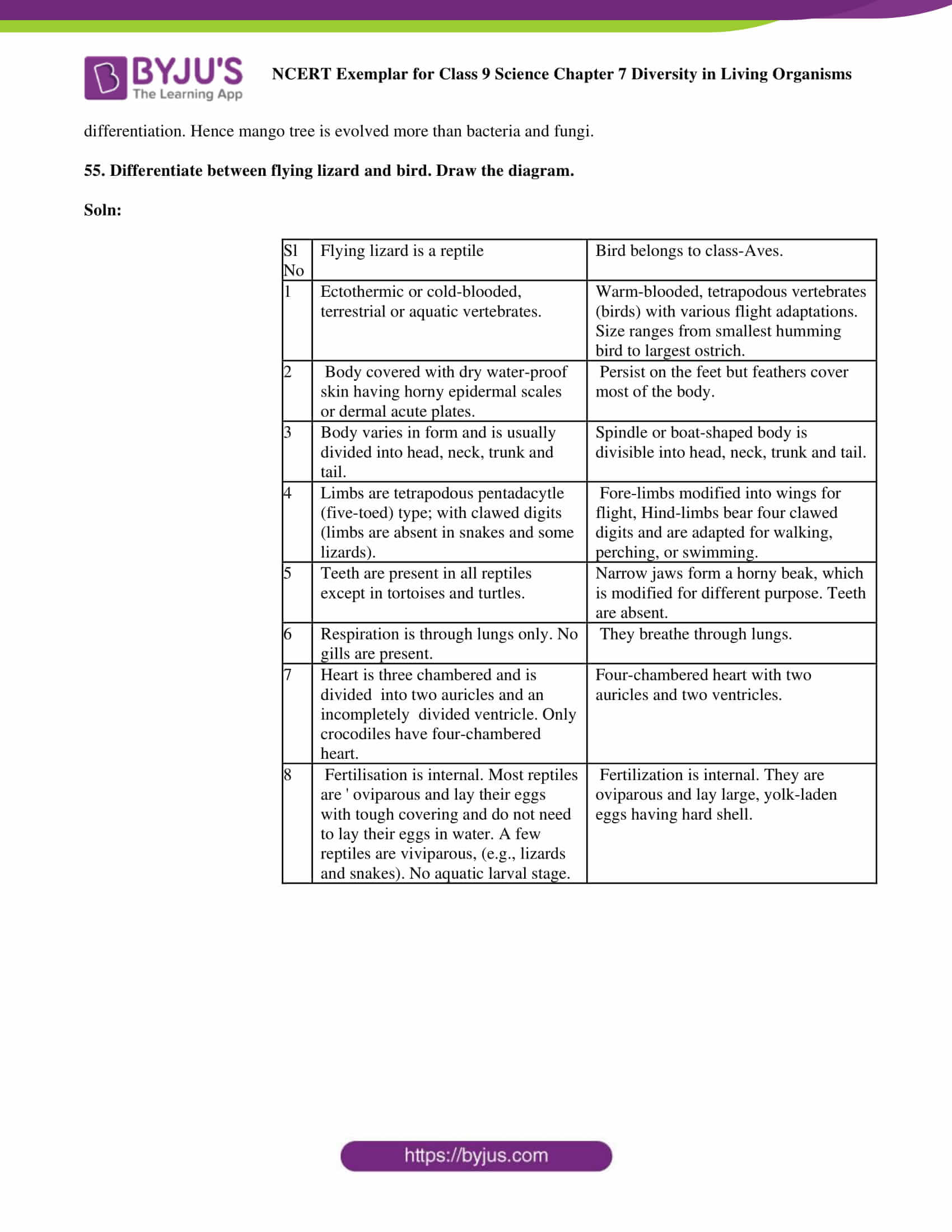 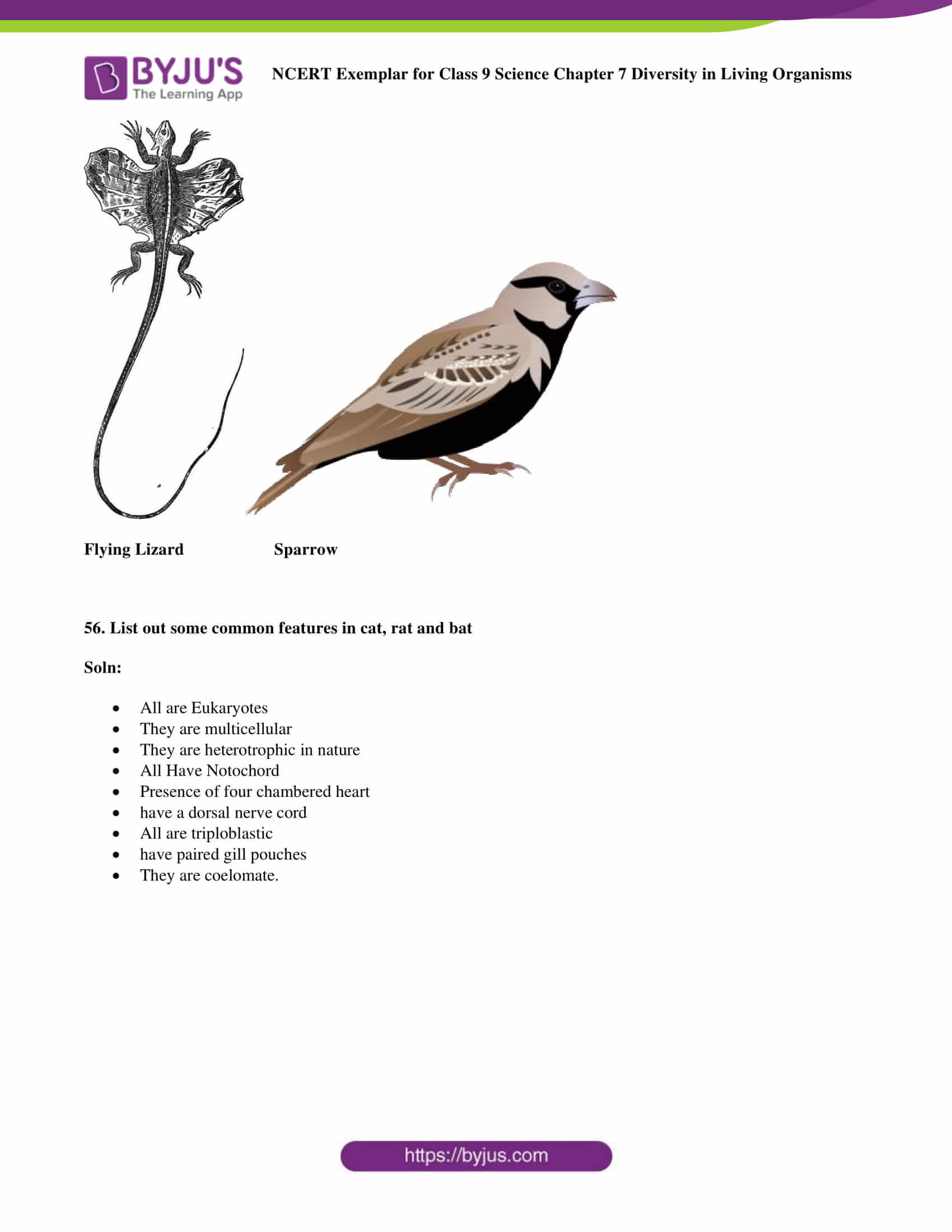 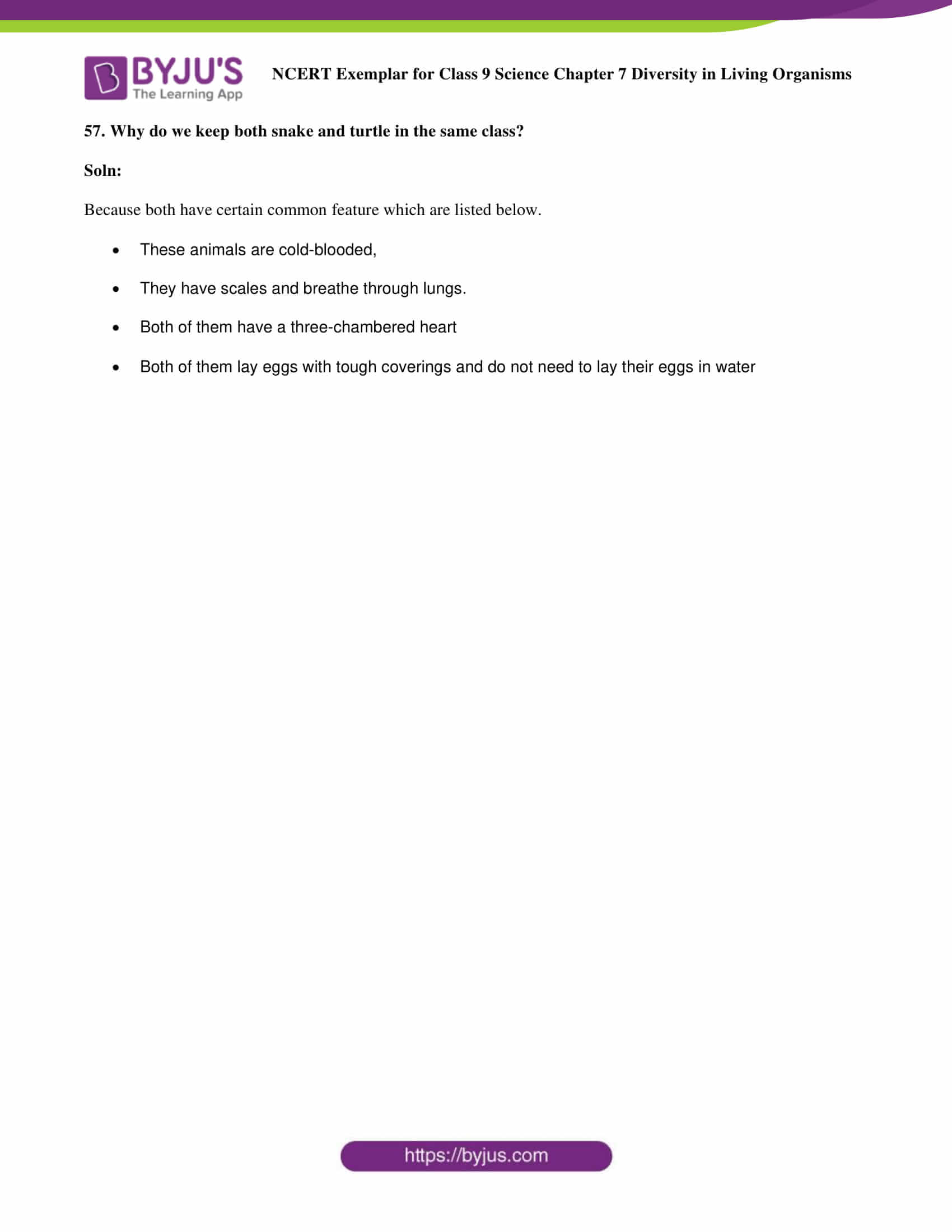 (b) Whittaker considered cell structure, mode and source of nutrition for classifying the organisms in five kingdoms

(c) Both Monera and Protista may be autotrophic and heterotrophic

(d) Monerans have a well-defined nucleus

Answer is (d) Monerans have a well-defined nucleus

2. Which among the following has specialised tissue for conduction of water?

3. Which among the following produce seeds?

Gymnosperms are the flowerless plants that produce seeds. But the seeds are not covered within an ovary and are hence called “naked seeds”.

Jellyfish is a coelenterate, starfish belongs to Echinodermata and silverfish is an Arthropod.

5. Which among the following is exclusively marine?

Answer is (b) Echinodermata

Echinodermata are exclusively found in the marine environment whereas Porifera, Molluscs and Pisces can be found in both marine and freshwater.

6. Which among the following have an open circulatory system?

7. In which group of animals, coelom is filled with blood?

Answer is (a) Arthropoda

Annelida, Nematoda and Echinodermata don’t have blood and Arthropods coelom is filled with blood.

8. Elephantiasis is caused by

Answer is (a) Wuchereria

Pinworm is a common intestinal parasite and causes enterobiasis

Liver flukes are flatworms that cause liver rot in Humans.

9. Which one is the most striking or (common) character of the vertebrates?

(a) Presence of notochord

(b) Presence of triploblastic condition

Answer is (a) Presence of notochord

10. Which among the following have scales?

11. Find out the false statement

(a) Aves are warm-blooded, egg laying and have a four-chambered heart

(b) Aves have feather-covered body, forelimbs are modified into wings and breathe through lungs

(c) Most of the mammals are viviparous

Answer is (d) Fishes, amphibians and reptiles are oviparous

Some fishes are viviparous but Amphibians show external fertilization they can neither be kept under oviparous nor be viviparous hence statement (d) is wrong.

12. Pteridophyta do not have

13. Identify a member of porifera

Euglena is a protozoan.

Penicillium is a fungus

Hydra is a Coelenterata

14. Which is not an aquatic animal?

Filaria is a disease caused by Wuchereria. It is spread by Mosquitos.

15. Amphibians do not have the following

(b) Gills or lungs

16. Organisms without nucleus and cell organelles belong to

Cyanobacteria and archaebacteria are prokaryotes and they do not have a well-defined nucleus and cell organelles.

Fungi and Protista are Eukaryote which posses Cell organelles and nucleus.

17. Which of the following is not a criterion for the classification of living organisms?

(a) Body design of the organism

(b) Ability to produce one’s own food

(d) Height of the plant

Answer is (d) Height of the plant

Height of a plant is an attribute which is related to bushes and trees which are part of Kingdom Plantae hence the height of the trees cannot be a criterion for classification of living organisms.

18. The feature that is not a characteristic of protochordata?

(a) Presence of notochord

(b) Bilateral symmetry and coelom

Protochordata are triploblastic with the bilaterally symmetric body and coelom. They show notochord at some stage of life and they are marine living.

19. The locomotory organs of Echinodermata are

Answer is (a) tube feet

Tube feet in Echinodermata help in locomotion and respiration

(a) Poriferans attached to some solid support

(b) Cnidarians, that are solitary living

(d) Cnidarians that live in colonies

Answer is (d) Cnidarians that live in colonies

21. Who introduced the system of scientific nomenclature of organisms

Answer is (b) Carolus Linnaeus

Answer is (b) fish

23. Skeleton is made entirely of cartilage in

Answer is (a) Sharks

Sharks are cartilaginous fish whereas Tuna and Rohu are bony fishes.

24. One of the following is not an Annelid

25. The book Systema Naturae was written by

Answer is (a) Linnaeus

26. Karl Von Linne was involved with which branch of science?

Answer is (b) Taxonomy

27. Real organs are absent in

Answer is (b) Coelenterata

28. Hard calcium carbonate structures are used as skeleton by

Echinodermata are spiny skinned organisms which are exclusively free-living marine animals. They are triploblastic and have a coelomic cavity. They use a unique water-driven tube from moving and they contain calcium carbonate structures which are used as a skeleton.

29. Differentiation in segmental fashion occurs in

Answer is (a) Leech

Leech belongs to Annelids and it shows metameric body segmentation.

30. In taxonomic hierarchy family comes between

(a) Class and Order

(b) Order and Genus

Answer is (b) Order and Genus

31. 5-Kingdom classification is given by

Answer is (b) R. Whittaker

32. Well-defined nucleus is absent in

Answer is (a) blue-green algae

Blue-green algae belong to prokaryotes which do not have a well-defined nucleus and cell organelles.

33. The ‘Origin of Species’ is written by

Answer is (b) Darwin

34. Meena and Hari observed an animal in their garden. Hari called it an insect while Meena said it was an earthworm. Choose the character from the following which confirms that it is an insect.

(b) Body with jointed legs

Answer is (b) Body with jointed legs

Body with jointed legs is a characteristic feature of Kingdom Arthropoda and all the insects belong to this kingdom.

(b) Monera is divided into Archaebacteria and Eubacteria.

(c) Starting from Class, Species comes before the Genus.

(f) All prokaryotes are classified under Monera.

(a) Fungi show———mode of nutrition.

(c) Association between blue-green algae and fungi is called as———.

(f) Plants without well-differentiated stem, root and leaf are kept in ———.

(g) ———are called as amphibians of the plant kingdom

37. You are provided with the seeds of gram, wheat, rice, pumpkin, maize and pea. Classify them whether they are monocot or dicot.

(b) Covered seed – (B) Gymnosperms

(a) Naked seed -(B) Gymnosperms

(b) Covered seed -(A) Angiosperms

(a) Pore bearing animals – (A) Arthropoda

(b) Diploblastic – (B) Coelenterata

(b) Diploblastic – (B) Coelenterata

40. Classify the following organisms based on the absence/presence of true coelom (i.e., acoelomate, pseudocoelomate and coelomate)

41. Endoskeleton of fishes are made up of cartilage and bone; classify the following fishes as cartilaginous or bony

Billed platypus and the echidna are two egg-laying mammals

(a) Five kingdom classification of living organisms is given by ———.

(b) Basic smallest unit of classification is ———.

(c) Prokaryotes are grouped in Kingdom ———.

(d) Paramecium is a protista because of its ———.

(f) A fungus ——— can be seen without microscope.

(g) Common fungi used in preparing the bread is ———.

(a) Five kingdom classification of living organisms is given by Robert Whittaker.

(b) Basic smallest unit of classification is Species.

(d) Paramecium is a protista because of its Eukaryotic unicellular morphology.

(e) Fungi do not contain Chlorophyll.

(f) A fungus Mushroom can be seen without microscope.

(g) Common fungi used in preparing the bread is Yeast.

(a) Gymnosperms differ from Angiosperms in having covered seed.

(b) Non-flowering plants are called Cryptogamae.

(e) Compound leaves are found in many ferns.

47. Give examples for the following

(a) Bilateral, dorsiventral symmetry is found in———.

(b) Worms causing disease elephantiasis is———.

(d) ———are known to have pseudocoelom.

(a) Bilateral, dorsiventral symmetry is found in Liver Fluke.

(c) Open circulatory system is found in Arthropods where coelomic cavity is filled with blood.

(d) Nematodes are known to have pseudocoelom.

49. Fill in the boxes given in Fig. 7.2 with appropriate characteristics/plant group (s) 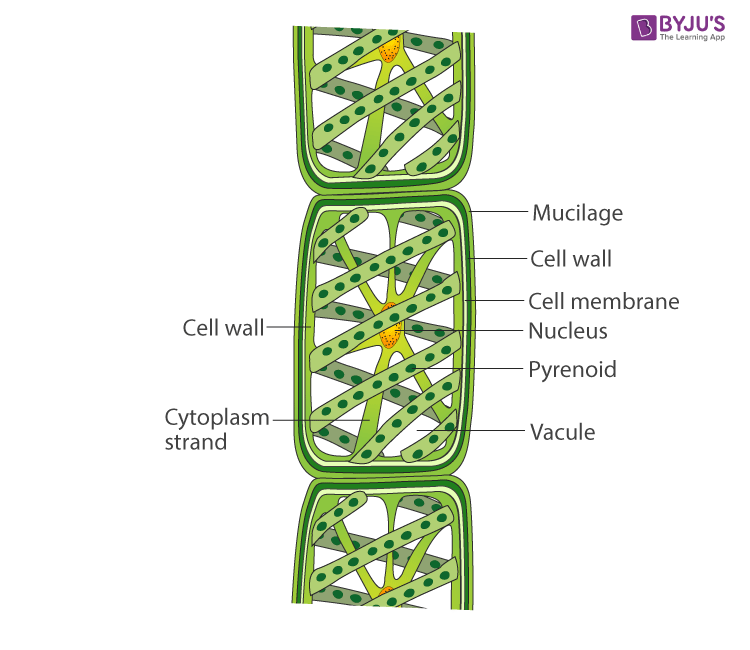 Thallophyta, bryophyta and pteridophyta are called as ‘Cryptogams’ because the reproductive organs of plants in all these three groups are very inconspicuous, and they are therefore called ‘cryptogams’, or ‘those with hidden reproductive organs’. In these plants seeds are absent.

Gymnosperms and Angiosperms are called as ‘phanerogams’ because these are the plants with well-differentiated reproductive parts that ultimately make seeds.

52. Define the terms and give one example of each

53. You are given leech, Nereis, Scolopendra, prawn and scorpion; and all have segmented body organisation. Will you classify them in one group? If no, give the important characters based on which you will separate these organisms into different groups.

The organisms given in the question does not belong to a common group of organisms. Leech and Nereis are annelids but Scolopendra, prawn and scorpion are arthropods

54. Which organism is more complex and evolved among Bacteria, Mushroom and Mango tree. Give reasons.

Among Bacteria, Mushroom and Mango tree; Mango tree is the complex and evolved organism Because it is Eukaryotic, multicellular, autotrophic terrestrial plant. It is an angiosperm and its seeds are covered within the ovary. Its reproductive organs and accumulated in the flower hence it is called as a flowering plant.

Bacteria are prokaryotic unicellular organisms and fungi are heterotrophic thallophytes with no body differentiation. Hence mango tree is evolved more than bacteria and fungi.

55. Differentiate between flying lizard and bird. Draw the diagram.

56. List out some common features in cat, rat and bat.

57. Why do we keep both snake and turtle in the same class?

Because both have a certain common feature which is listed below.

Diversity in Living Organisms is a theoretical topic which needs a lot of practice to write the right answers in the examination. In order to make your reading and understanding easier BYJU’S brings, videos, animations, info-graphics, NCERT Solutions, Worksheets and exercise which will make you comprehend with this volatile topic. To watch this interesting video subscribe BYJU’S YouTube channel.

What will I learn from the Chapter 7 of NCERT Exemplar Solutions for Class 9 Science?

Why should I download the BYJU’S NCERT Exemplar Solutions for Class 9 Science Chapter 7 PDF?

1. The NCERT Exemplar Solutions contain easy to understand language to help students score high marks in the board exams.
2. The solutions will be helpful not only for the board exams, but also for various competitive exams and science olympiads.
3. The fully resolved solutions clears doubts of students from the NCERT textbooks.
4. The subject experts design the solutions with accurate and genuine information to improve confidence among students.
5. The detailed answers to all the questions help students with their board exam preparation.

How to answer difficult questions regarding the Chapter 7 of NCERT Exemplar Solutions for Class 9 Science?

To solve complicated questions, students must first be focused on learning the fundamental concepts. Top priority should be given to core sections more than the other areas. Clear knowledge regarding the chapter not only helps students to solve the questions but also helps them to implement new ideas in the future. Students who aspire to opt this subject in higher education must have a clear idea about concepts like kingdoms and their Classifications..