NCERT Exemplar Solution for Class 9 Science Chapter 8 Motion is prepared to help the students of Class 9 who wish to have a good foundation on the subjects, which will help them to prepare for their upcoming board and competitive exams. One such basic chapter that helps the students in their future is Motion. Here, we have provided the NCERT Exemplar for Class 9 Science Chapter 8 PDF, so that students can download the file and access the study material from anywhere in the world, at any point of time.

NCERT Exemplar Class 9 Motion offers answers to the questions provided in the NCERT Exemplar book. This Exemplar has MCQs, numerical problems, short answer questions and long answer questions. Motion is one of the most important topics in Physics. In Class 8 students will learn the basic concepts of Physics like motion in a straight line, uniform and non-uniform motion, velocity and rate of change of velocity. Enhance your learning by solving the NCERT Exemplar Science Class 9 Chapter 8 Motion. To download, visit the below link. 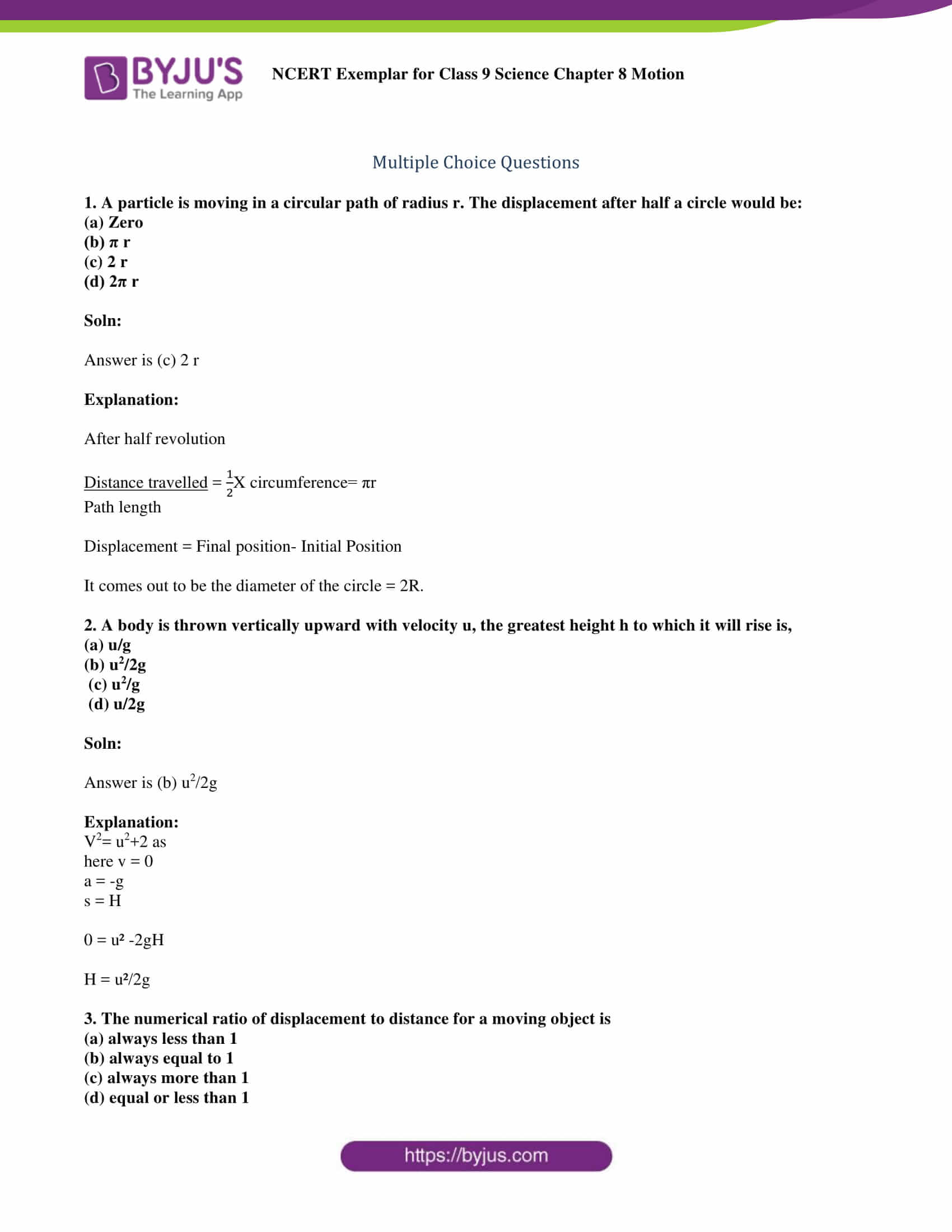 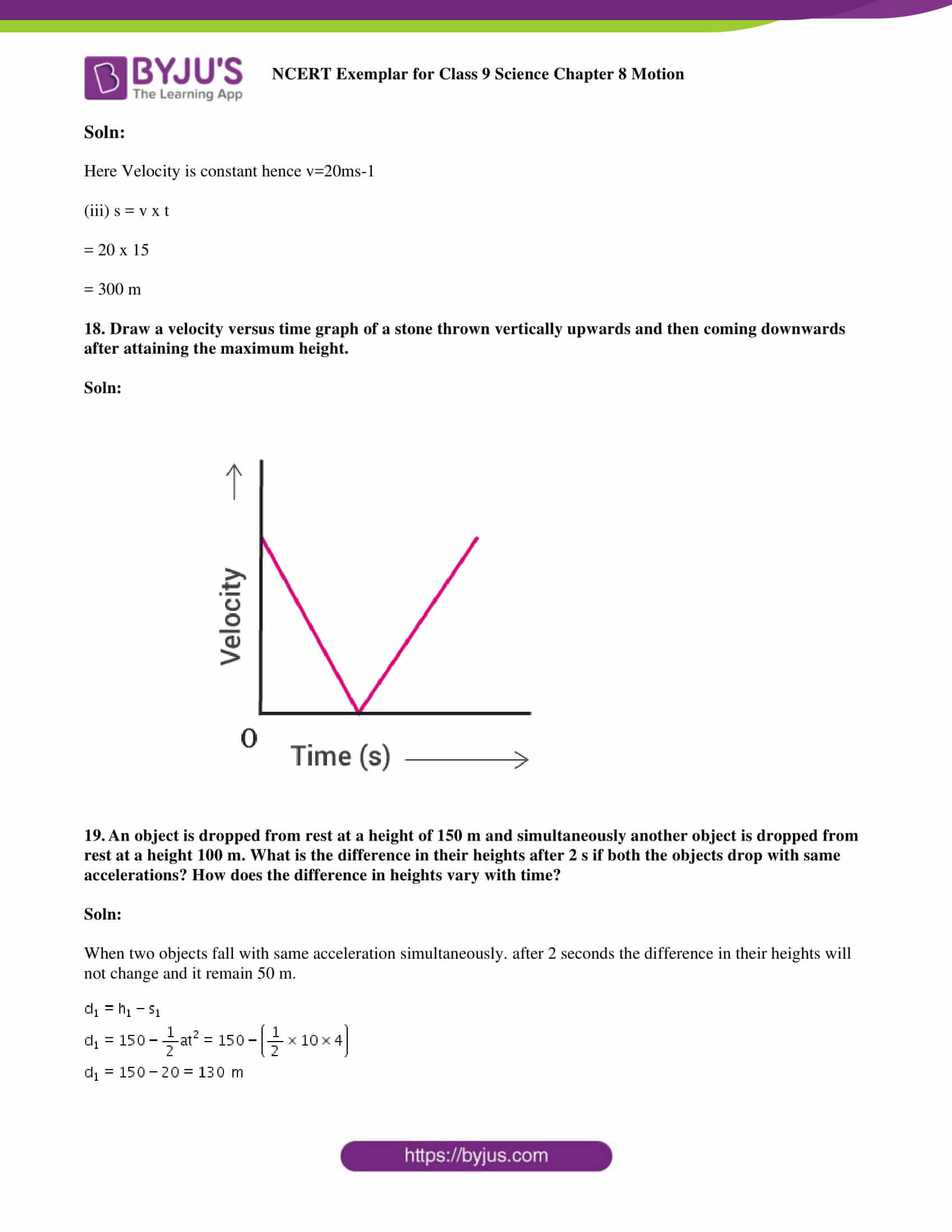 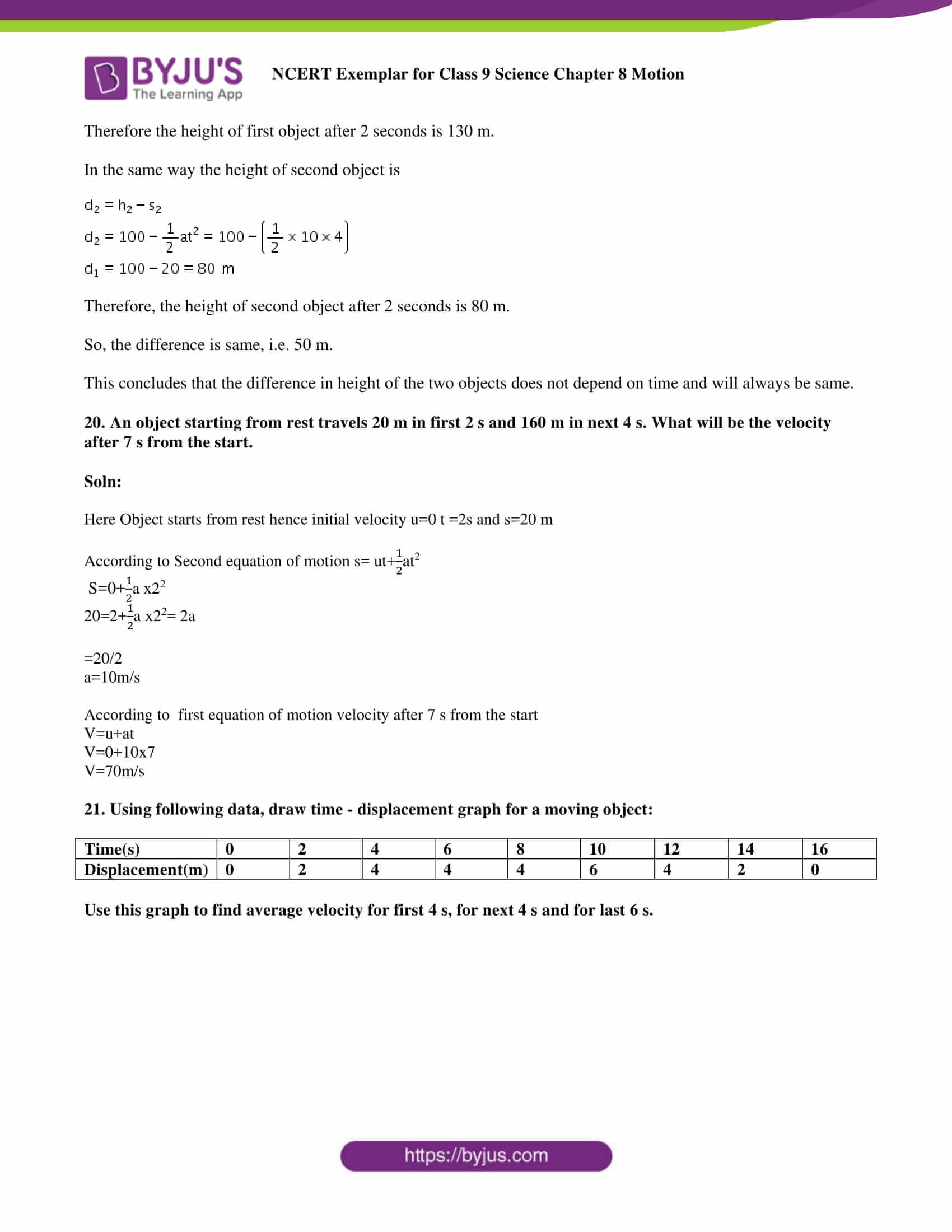 1. A particle is moving in a circular path of radius r. The displacement after half a circle would be:

It comes out to be the diameter of the circle = 2R.

2. A body is thrown vertically upward with velocity u, the greatest height h to which it will rise is,

3. The numerical ratio of displacement to distance for a moving object is

Answer is (d) equal or less than 1

The shortest distance between the initial and the endpoint is called displacement. Distance is the total path length.

Displacement is vector and it may be positive or negative whereas Distance is scalar and it can never be negative.

The distance can be equal or greater than displacement which means the ratio of displacement to distance is always equal to or less than 1.

4. If the displacement of an object is proportional to square of time, then the object moves with

Answer is (b) uniform acceleration

(a) in uniform motion 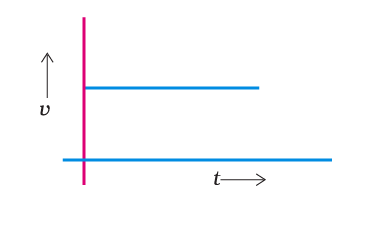 Answer is (a) in uniform motion

From the above-given graph, it is clear that velocity of the object remains constant throughout hence the object is in uniform motion.

6. Suppose a boy is enjoying a ride on a merry-go-round which is moving with a constant speed of 10 m/s. It implies that the boy is

(b) moving with no acceleration

Answer is (c) in accelerated motion

7. Area under a v – t graph represents a physical quantity which has the unit

The area given in the graph represents Displacement and its unit is meter. Hence the answer is (b) m

8. Four cars A, B, C and D are moving on a levelled road. Their distance versus time graphs are shown in Fig. 8.2. Choose the correct statement 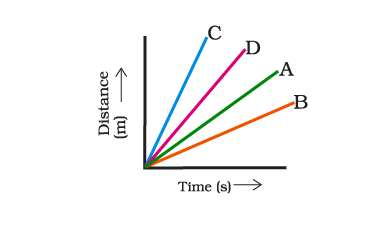 Answer is (b) Car B is the slowest.

Graph shows that Car B covers less distance in a given time than A, C and D cars hence it is the slowest.

9. Which of the following figures (Fig. 8.3) represents uniform motion of a moving object correctly? 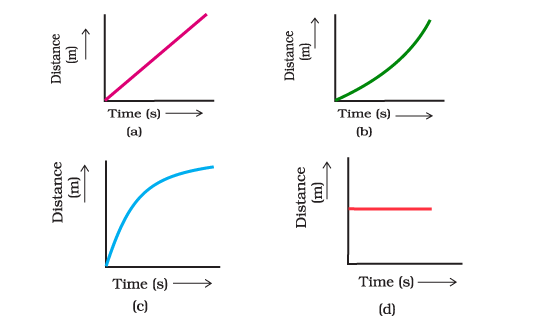 Distance in graph a) is uniformly increasing with time hence it represents uniform motion.

Answer is (c) the acceleration

11. In which of the following cases of motions, the distance moved and the magnitude of displacement are equal?

(a) If the car is moving on straight road

(b) If the car is moving in circular path

(c) The pendulum is moving to and fro

(d) The earth is revolving around the Sun

In other cases given here displace can be less than distance hence option (a) If the car is moving on a straight road is the right answer.

12. The displacement of a moving object in a given interval of time is zero. Would the distance travelled by the object also be zero? Justify your answer.

Displacement zero does not mean zero distance. The distance can be zero when moving an object back to the place it started. Displacement is either equal or less than distance but the distance is always greater than one and it cannot be a negative value.

13. How will the equations of motion for an object moving with a uniform velocity change?

If object is moving with a uniform velocity then v=µ and a=0. In this scenario equation for distance is given below.

14. A girl walks along a straight path to drop a letter in the letterbox and comes back to her initial position. Her displacement–time graph is shown in Fig.8.4. Plot a velocity-time graph for the same. 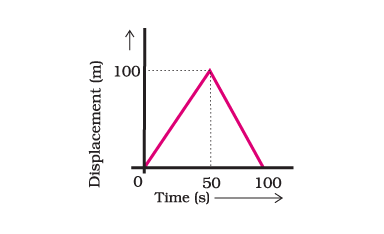 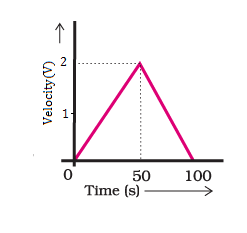 15. A car starts from rest and moves along the x-axis with constant acceleration of 5 m/s2 for 8 seconds. If it then continues with constant velocity, what distance will the car cover in 12 seconds since it started from the rest?

16. A motorcyclist drives from A to B with a uniform speed of 30 km/h and returns back with a speed of 20 km h–1. Find its average speed.

Let the distance from A to B is D kms.

Distance for the entire journey is 2D kms.

Hence Average speed of the motorcycle is 24 km/h.

17. The velocity-time graph (Fig. 8.5) shows the motion of a cyclist. Find (i) its acceleration (ii) its velocity and (iii) the distance covered by the cyclist in 15 seconds 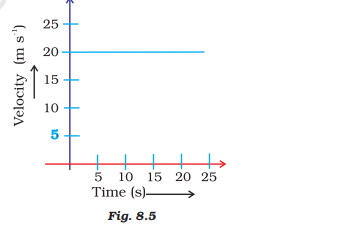 (i) As velocity is constant, acceleration is 0 m/s2

18. Draw a velocity versus time graph of a stone thrown vertically upwards and then coming downwards after attaining the maximum height.

The velocity versus time graph of a stone thrown upwards vertically is as given below: 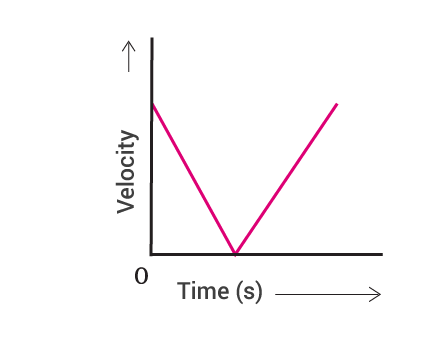 When two objects fall with the same acceleration simultaneously, after 2 seconds the difference in their heights will not change and it remains 50 m.

Therefore the height of the first object after 2 seconds is 130 m.

In the same way, the height of the second object is

Therefore, the height of the second object after 2 seconds is 80 m.

This concludes that the difference in height of the two objects does not depend on time and will always be same.

According to Second equation of motion s= ut+at2

Use this graph to find average velocity for first 4 s, for next 4 s and for last 6 s. 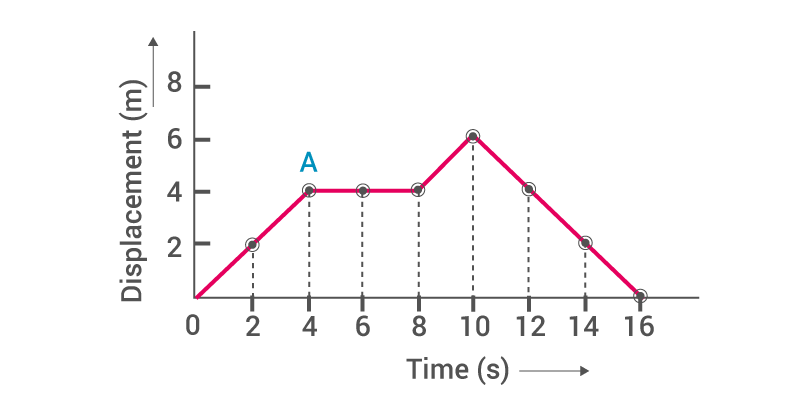 Average velocity for the first 4s =

22. An electron moving with a velocity of 5 × 104 m/s enters into a uniform electric field and acquires a uniform acceleration of 104 ms-2 in the direction of its initial motion.

(i) Calculate the time in which the electron would acquire a velocity double of its initial velocity.

(ii) How much distance the electron would cover in this time?

23. Obtain a relation for the distance travelled by an object moving with a uniform acceleration in the interval between 4th and 5th seconds.

Assume that air resistance is nil.

We can directly contain it by using Newton’s equations of motion or from the below-mentioned method:

Thus area under the v-t curve and the x-axis where the slope of the curve is the instantaneous acceleration.

In this case acceleration, g is constant and due to free-fall condition, the initial velocity is zero. Therefore the v-t curve is a straight line with a slope equal to g equal to 9.81 m/s  passing through the origin.

On dividing the total area under the curve into the interval of unit seconds, then we initially obtain a triangle followed by trapeziums of increasing height.

The ratio of the area of the first triangle to second triangle to the third triangle is equal to the ratio of displacement in first, second and third second. We get ratio equal to 1:3:5:7:9…  and so on.

24. Two stones are thrown vertically upwards simultaneously with their initial velocities u1 and u2 respectively. Prove that the heights reached by them would be in the ratio of u1² :u2² 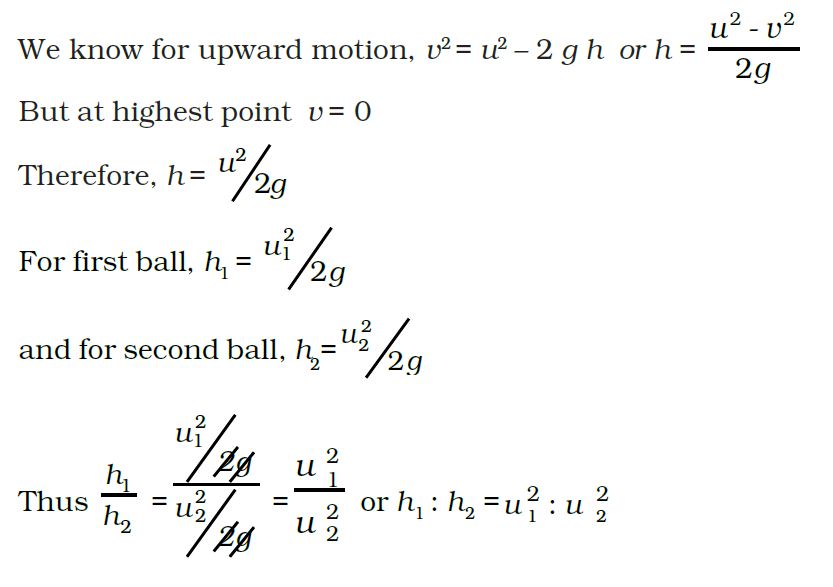 We, at BYJU’S, provide NCERT Exemplar in a chapter-wise to help students in their studies. All the solutions in this study material are explained in a simple language and in an easy format for students to learn better and effectively. These NCERT Exemplars for Class 9 Science, Chapter 8 Motion provide complete information regarding the topic along with the definitions and examples. These NCERT Exemplars are available in PDF format and students can directly download these materials or can practise online by visiting our website at BYJU’S website or by downloading BYJU’S App. For CBSE study materials, notes, sample papers, videos and animation visit our website at BYJU’S or download the BYJU’S App.

List out the topics discussed in the Chapter 8 of NCERT Solutions for Class 9 Science.

The topics discussed in the Chapter 8 of NCERT Solutions for Class 9 Science are –
1. Introduction
2. Speed
3. Velocity
4. Distance and displacement
5. Uniform and non-uniform motion
6. Equations of motion
7. Uniform circular motion.

Explain the process of Uniform and non-uniform motion covered in Chapter 8 of NCERT Solutions for Class 9 Science.

Why is the NCERT Exemplar Solutions for Class 9 Science Chapter 8 important for the exams?

Class 9 is considered to be one of the crucial steps in students’ life. For this purpose, the faculty at BYJU’S have designed the chapter-wise solutions after conducting vast research on each concept. The solutions contain detailed and step wise explanations to help students score well in the board exams. PDF format of solutions is available on BYJU’S which can be downloaded and used by the students based on their requirements.
Also, Read