This NCERT Exemplar Solutions Class 9 Science provides you with MCQs, atomic structure short answer questions and long answers that will help you find the possible type of questions to be asked in Class 9 CBSE examinations and competitive examinations. Instead of searching for a best reference book, students can directly access the solutions from BYJU’S. The answers for each and every chapter are designed by the experts with utmost care to help students gain a hold on the important concepts. 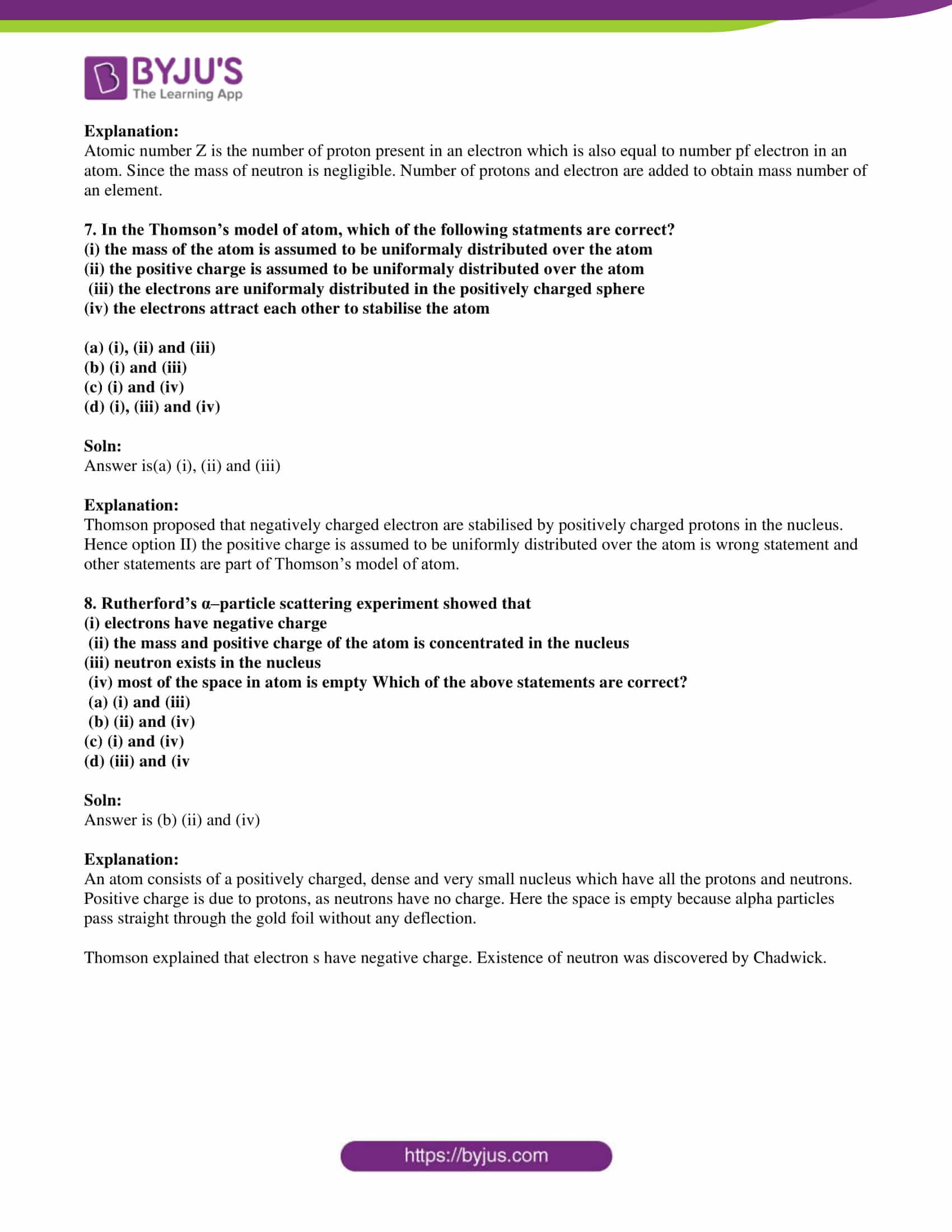 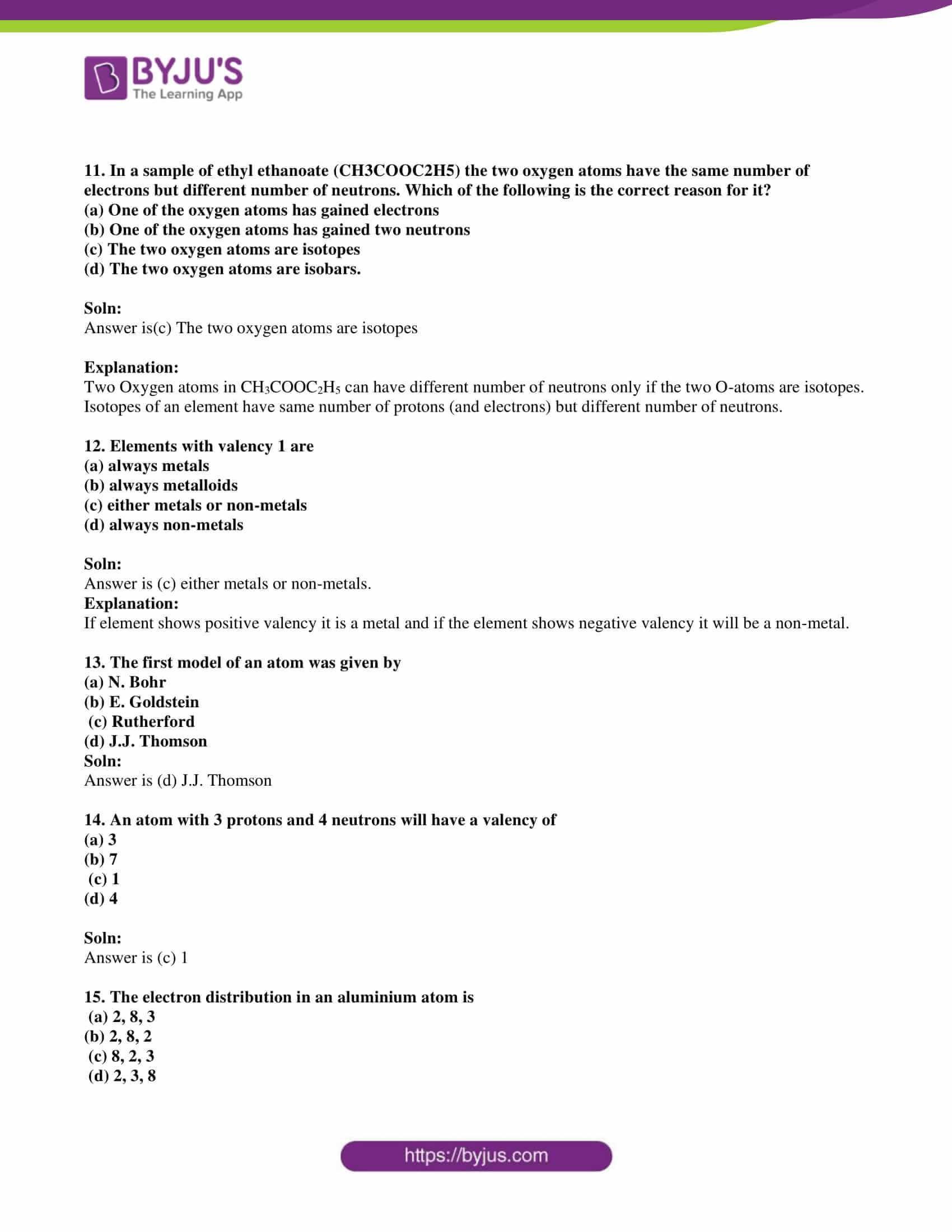 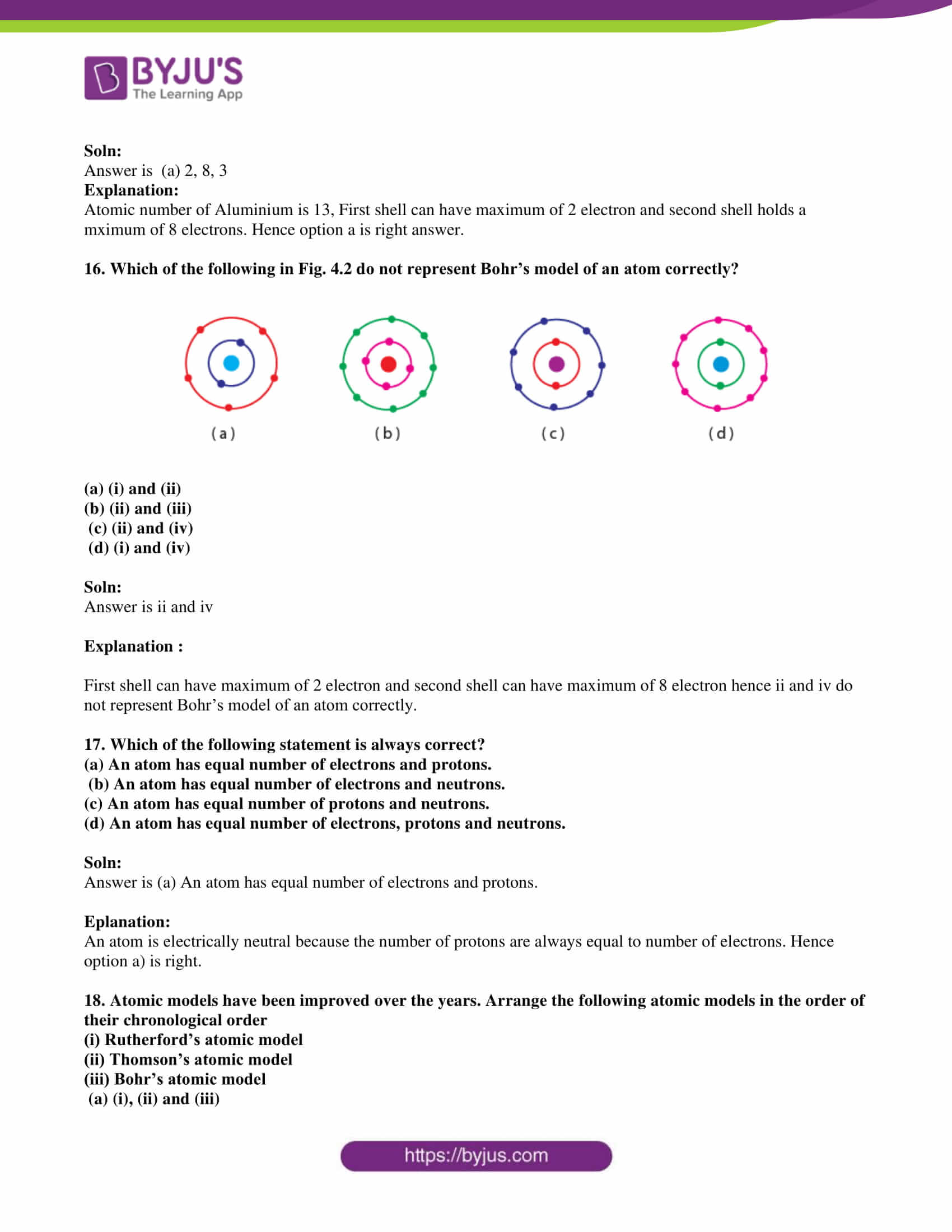 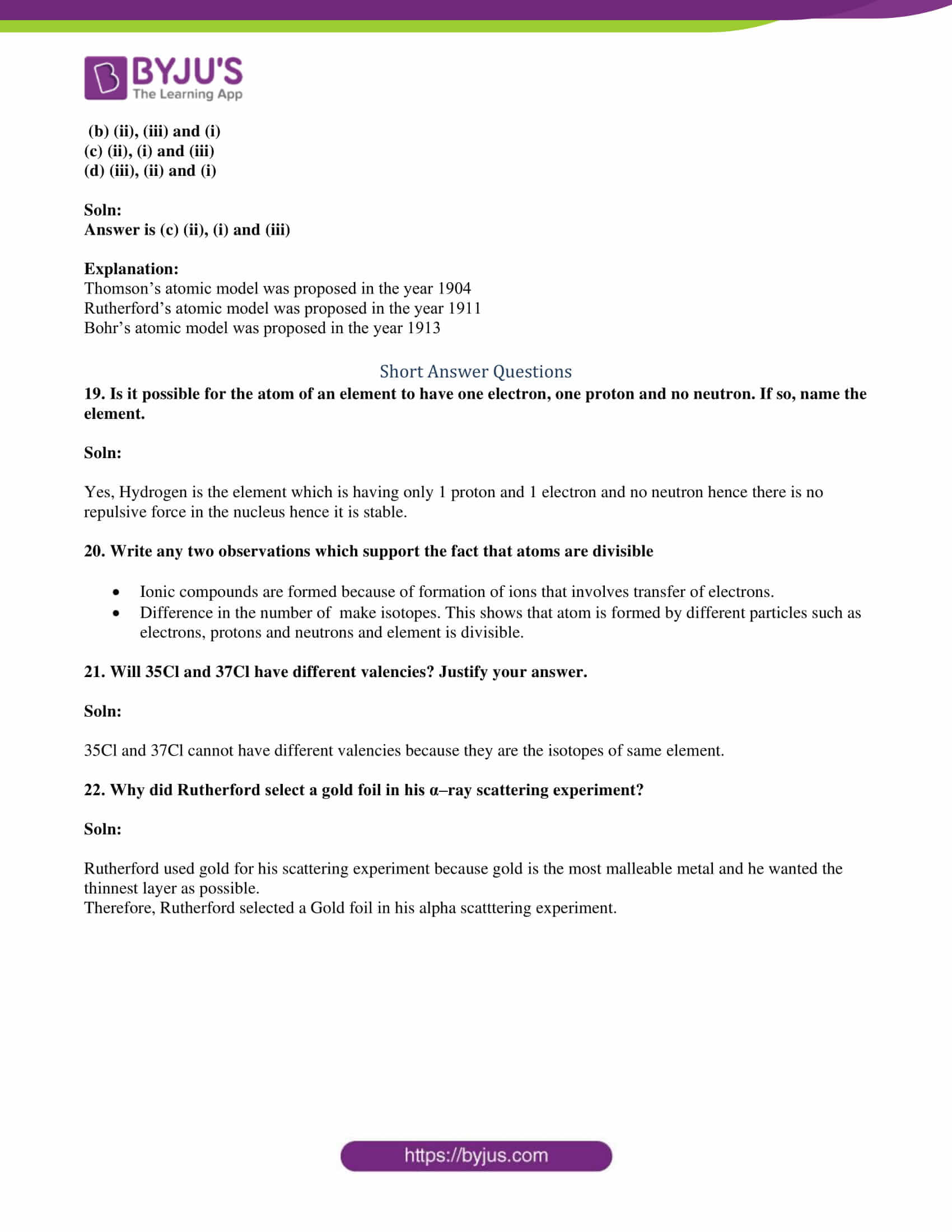 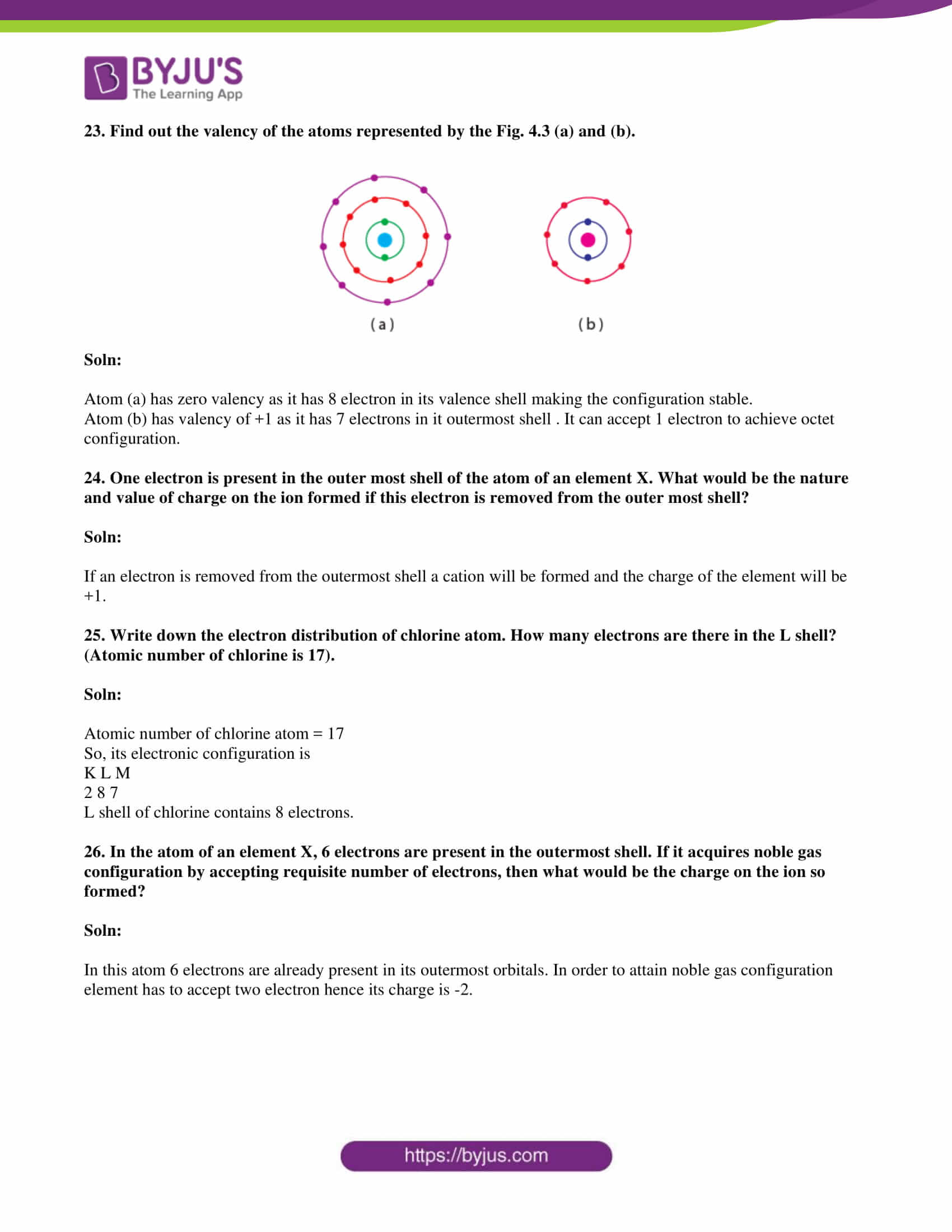 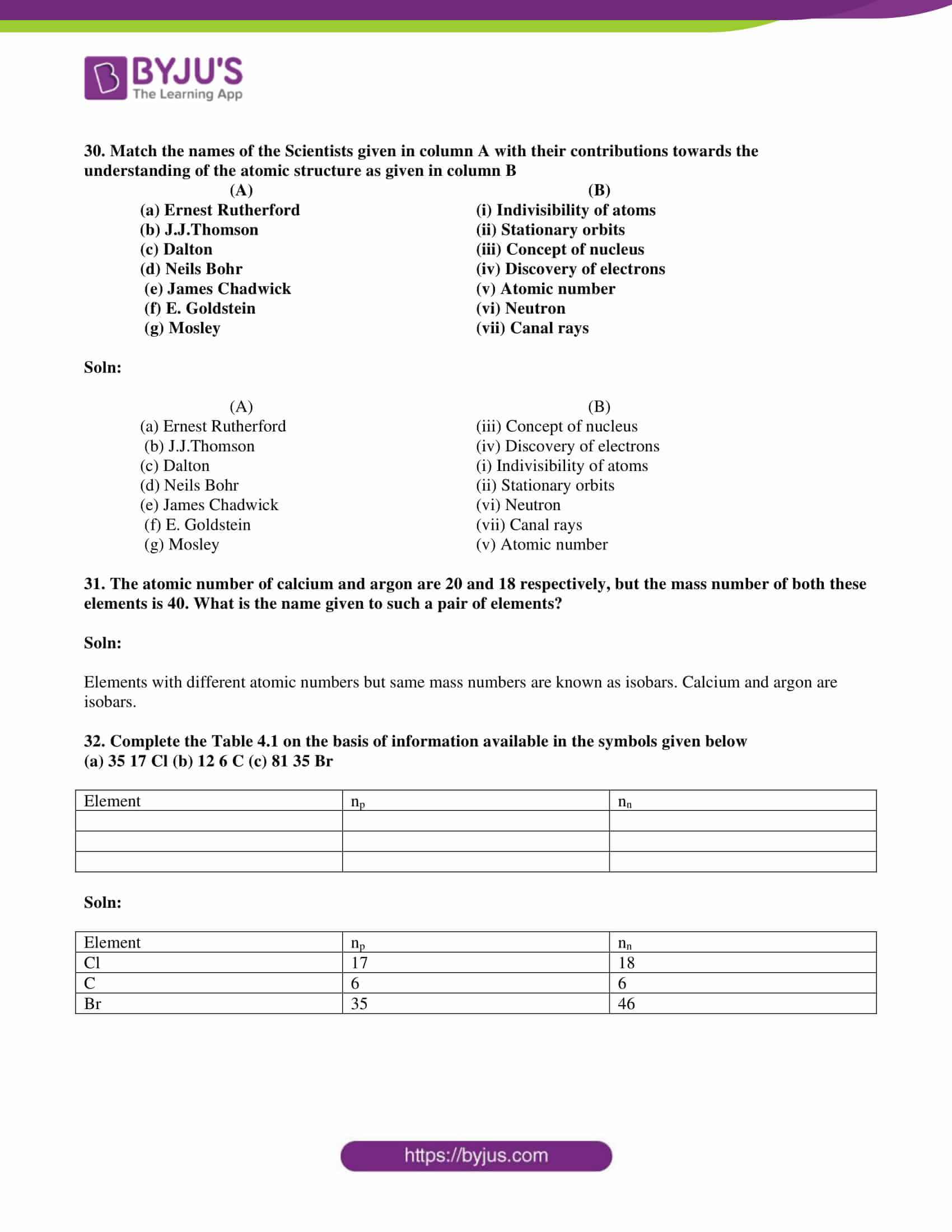 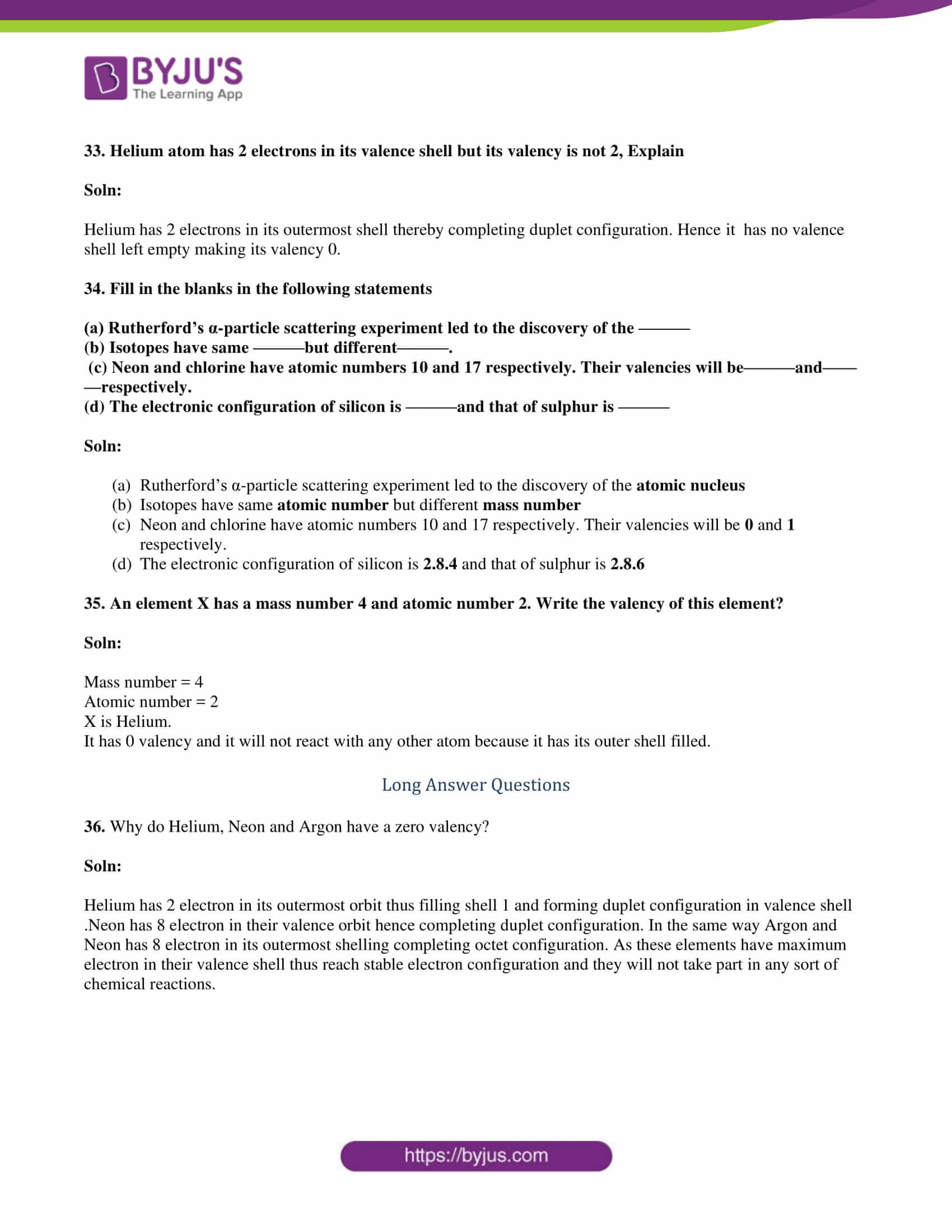 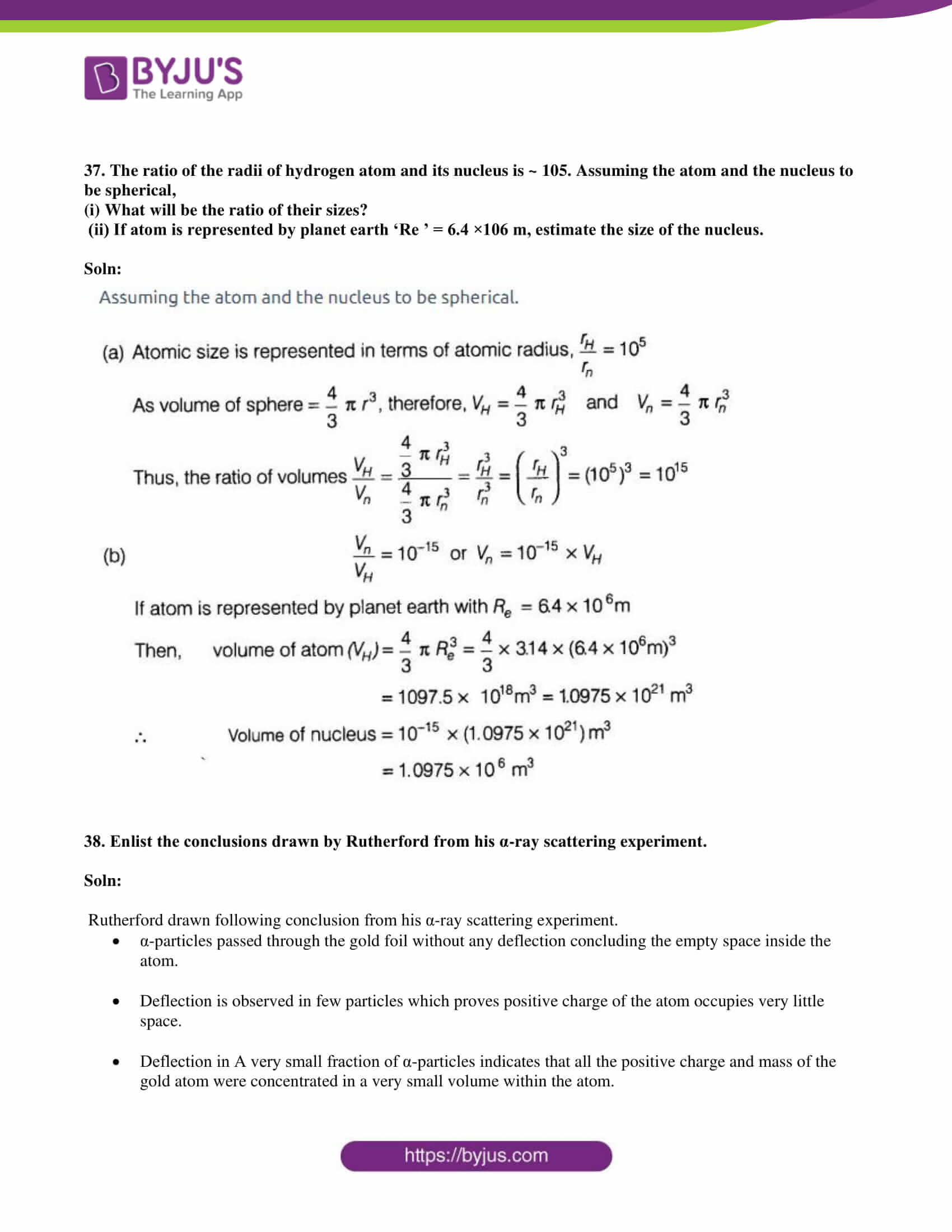 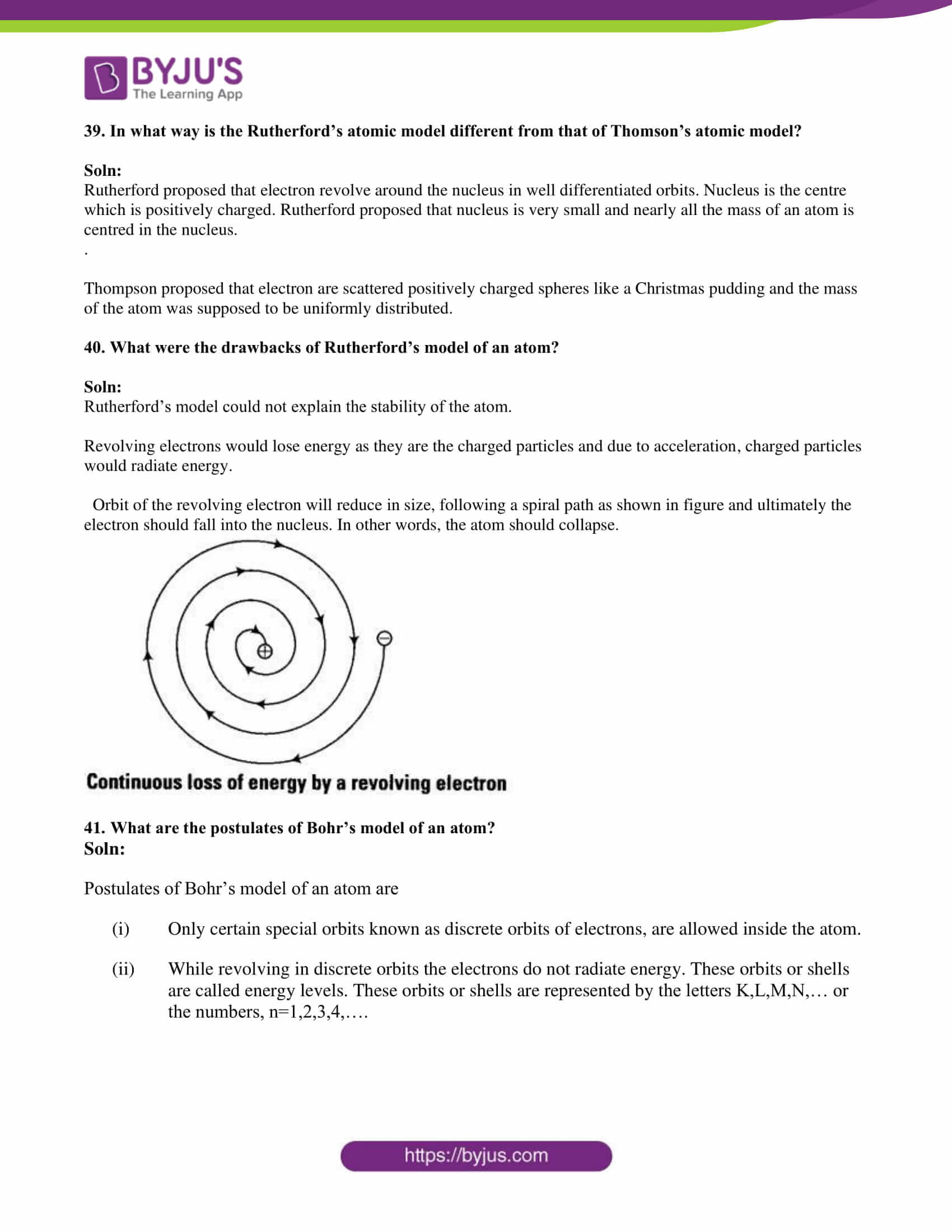 1. Which of the following correctly represent the electronic distribution in the Mg atom?

Atomic number of Mg is 12 hence electronic distribution will be 1s22s22p63s2.

(c) Nucleus in the atom

Answer is (c) Nucleus in the atom

Rutherford’s ‘alpha (α) particles scattering experiment’ experiment concludes that alpha particles returned to their original path. This showed the presence of a nucleus in the centre.

3. The number of electrons in an element X is 15 and the number of neutrons is 16. Which of the following is the correct representation of the element?

(i) Law of conservation of mass

Dalton’s theory explains Law of conservation of mass, Law of constant composition, Law of multiple proportions. But it never gives any details of Law of radioactivity.

5. Which of the following statements about Rutherford’s model of atom are correct?

(i) considered the nucleus as positively charged

(iii) can be compared to solar system

(iv) was in agreement with Thomson’s model

6. Which of the following are true for an element?

(i) Atomic number = number of protons + number of electrons

7. In the Thomson’s model of atom, which of the following statements are correct?

(iii) the electrons are uniformly distributed in the positively charged sphere

(iv) the electrons attract each other to stabilise the atom

According to Thomson, the model of an atom is similar to a Christmas pudding.The electrons are studded like currants in a positively charged sphere like Christmas pudding and the mass of the atom was supposed to be uniformly distributed.

(i) electrons have a negative charge

(iii) neutron exists in the nucleus

(iv) most of the space in the atom is empty Which of the above statements are correct?

An atom consists of a positively charged, dense and very small nucleus which have all the protons and neutrons. The positive charge is due to protons, as neutrons have no charge. Here the space is empty because alpha particles pass straight through the gold foil without any deflection.

Thomson explained that electron s have a negative charge. Existence of neutron was discovered by Chadwick.

9. The ion of an element has 3 positive charges. Mass number of the atom is 27 and the number of neutrons is 14. What is the number of electrons in the ion?

Number of the neutron in the atom =14

Since ions of the element have 3 positive charges number of the electron in the ion is 13-3 which equal 10.

Hence the answer is 10

10. Identify the Mg2+ ion from the Fig.4.1 where, n and p represent the number of neutrons and protons respectively.

11. In a sample of ethyl ethanoate (CH3COOC2H5) the two oxygen atoms have the same number of electrons but different number of neutrons. Which of the following is the correct reason for it?

(a) One of the oxygen atoms has gained electrons

(b) One of the oxygen atoms has gained two neutrons

12. Elements with valency 1 are

(c) either metals or non-metals

Answer is (c) either metals or non-metals.

13. The first model of an atom was given by

14. An atom with 3 protons and 4 neutrons will have a valency of

15. The electron distribution in an aluminium atom is

Atomic number of Aluminium is 13, the First shell can have a maximum of 2 electron and the second shell holds a maximum of 8 electrons. Hence option a is the right answer.

16. Which of the following in Fig. 4.2 do not represent Bohr’s model of an atom correctly?

Answer is ii and iv

17. Which of the following statement is always correct?

(a) An atom has equal number of electrons and protons.

(b) An atom has equal number of electrons and neutrons.

(c) An atom has equal number of protons and neutrons.

(d) An atom has equal number of electrons, protons and neutrons.

Answer is (a) An atom has equal number of electrons and protons.

An atom is electrically neutral because the number of protons is always equal to a number of electrons. Hence option a) is right.

18. Atomic models have been improved over the years. Arrange the following atomic models in the order of their chronological order

Thomson’s atomic model was proposed in the year 1904

Rutherford’s atomic model was proposed in the year 1911

Bohr’s atomic model was proposed in the year 1913

19. Is it possible for the atom of an element to have one electron, one proton and no neutron. If so, name the element.

Yes, Hydrogen is the element which is having only 1 proton and 1 electron and no neutron hence there is no repulsive force in the nucleus hence it is stable.

20. Write any two observations which support the fact that atoms are divisible

21. Will 35Cl and 37Cl have different valencies? Justify your answer.

35Cl and 37Cl cannot have different valencies because they are the isotopes of the same element.

22. Why did Rutherford select a gold foil in his α–ray scattering experiment?

Rutherford used gold for his scattering experiment because gold is the most malleable metal and he wanted the thinnest layer as possible.

Atom (a) has zero valencies as it has 8 electrons in its valence shell making the configuration stable.

Atom (b) has a valency of +1 as it has 7 electrons in its outermost shell. It can accept 1 electron to achieve octet configuration.

If an electron is removed from the outermost shell a cation will be formed and the charge of the element will be +1.

25. Write down the electron distribution of chlorine atom. How many electrons are there in the L shell? (Atomic number of chlorine is 17).

So, its electronic configuration is

26. In the atom of an element X, 6 electrons are present in the outermost shell. If it acquires noble gas configuration by accepting requisite number of electrons, then what would be the charge on the ion so formed?

In this atom, 6 electrons are already present in its outermost orbitals. In order to attain a noble gas configuration element has to accept two-electron hence its charge is -2.

27. What information do you get from the Fig. 4.4 about the atomic number, mass number and valency of atoms X, Y and Z? Give your answer in a tabular form.

29. Calculate the number of neutrons present in the nucleus of an element X which is represented as 31X15

(a) Ernest Rutherford – (i) Indivisibility of atoms

(a) Ernest Rutherford – (iii) Concept of the nucleus

(b) J.J.Thomson – (iv) Discovery of electrons

(c) Dalton – (i) Indivisibility of atoms

31. The atomic number of calcium and argon are 20 and 18 respectively, but the mass number of both these elements is 40. What is the name given to such a pair of elements?

Elements with different atomic numbers but same mass numbers are known as isobars. Calcium and argon are isobars.

32. Complete Table 4.1 on the basis of information available in the symbols given below

33. Helium atom has 2 electrons in its valence shell but its valency is not 2, Explain

Helium has 2 electrons in its outermost shell thereby completing duplet configuration. Hence it has no valence shell left empty making its valency 0.

34. Fill in the blanks in the following statements

(c) Neon and chlorine have atomic numbers 10 and 17 respectively. Their valencies will be———and———respectively.

Soln:
a) Rutherford’s α-particle scattering experiment led to the discovery of the atomic nucleus
b) Isotopes have same atomic number but different mass number
c) Neon and chlorine have atomic numbers 10 and 17 respectively. Their valencies will be 0 and 1 respectively.
d) The electronic configuration of silicon is 2.8.4 and that of sulphur is 2.8.6

35. An element X has a mass number 4 and atomic number 2. Write the valency of this element?

It has 0 valency and it will not react with any other atom because it has its outer shell filled.

36. Why do Helium, Neon and Argon have a zero valency?

37. The ratio of the radii of hydrogen atom and its nucleus is ~ 105. Assuming the atom and the nucleus to be spherical,

(i) What will be the ratio of their sizes? 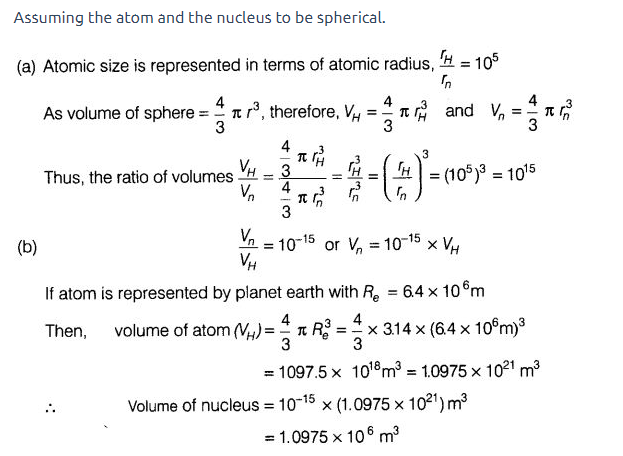 38. Enlist the conclusions drawn by Rutherford from his α-ray scattering experiment.

Thompson proposed that electron are scattered positively charged spheres like a Christmas pudding and the mass of the atom was supposed to be uniformly distributed.

40. What were the drawbacks of Rutherford’s model of an atom?

Rutherford’s model could not explain the stability of the atom.

The orbit of the revolving electron will reduce in size, following a spiral path as shown in the figure and ultimately the electron should fall into the nucleus. In other words, the atom should collapse. 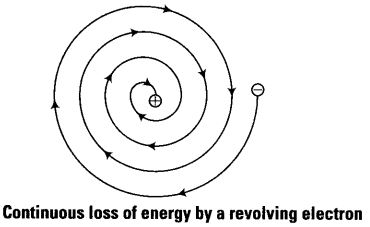 41. What are the postulates of Bohr’s model of an atom?

Postulates of Bohr’s model of an atom are

42. Show diagrammatically the electron distributions in a sodium atom and a sodium ion and also give their atomic number.

Na+ ion is formed from sodium atom by loss of an electron (present in the outermost shell). Hence,

the electronic configuration is 2, 8(K, L). However, the number of protons and neutrons remains the same. 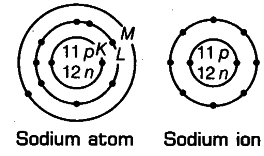 NCERT Exemplar for Chapter 4 Structure of the Atom

Before solving the questions related to the structure of the atom let us learn what an Atom is? An atom is the smallest constituent unit of ordinary matter that has the properties of chemical elements. Important topics related to this chapter are:

BYJU’S has country’s top teachers on its board as mentors. Their experience will help you immensely in understanding the concepts clearly and to memorise the concepts for a very long time. For NCERT Study materials and to know about our innovative teaching methodology download BYJU’S Learning App.

What type of questions are present in Chapter 4 of NCERT Exemplar Solutions for Class 9 Science?

List out the topics present in Chapter 4 of NCERT Exemplar Solutions for Class 9 Science.

The topics present in the Chapter 4 of NCERT Exemplar Solutions for Class 9 Science are –
1. Charged Particles In Matter
2. The Structure Of An Atom
(2a) Thomson’s Model of an Atom
(2b) Rutherford’s Model of an Atom
(2c) Bohr’s Model of Atom
(2d) Neutrons
3. How Are Electrons Distributed In Different Orbits (Shells)
4. Valency
5. Atomic Number and Mass Number
(5a) Atomic Number
(5b) Mass Number
6. Isotopes
(6a) Isobars

Where can I get the NCERT Exemplar Solutions for Class 9 Science Chapter 4 online?

Class 9 is an important stage in every student’s life. The marks obtained in class 9 will decide the career path of students. For this purpose, the faculty at BYJU’S have created the solutions for all the chapters based on the CBSE syllabus. Students can download the NCERT Solutions available in PDF format from BYJU’S. The solutions are framed by keeping in mind the exam preparation of students irrespective of their intelligence quotient.