To download the NCERT exemplar questions, visit the below links given. 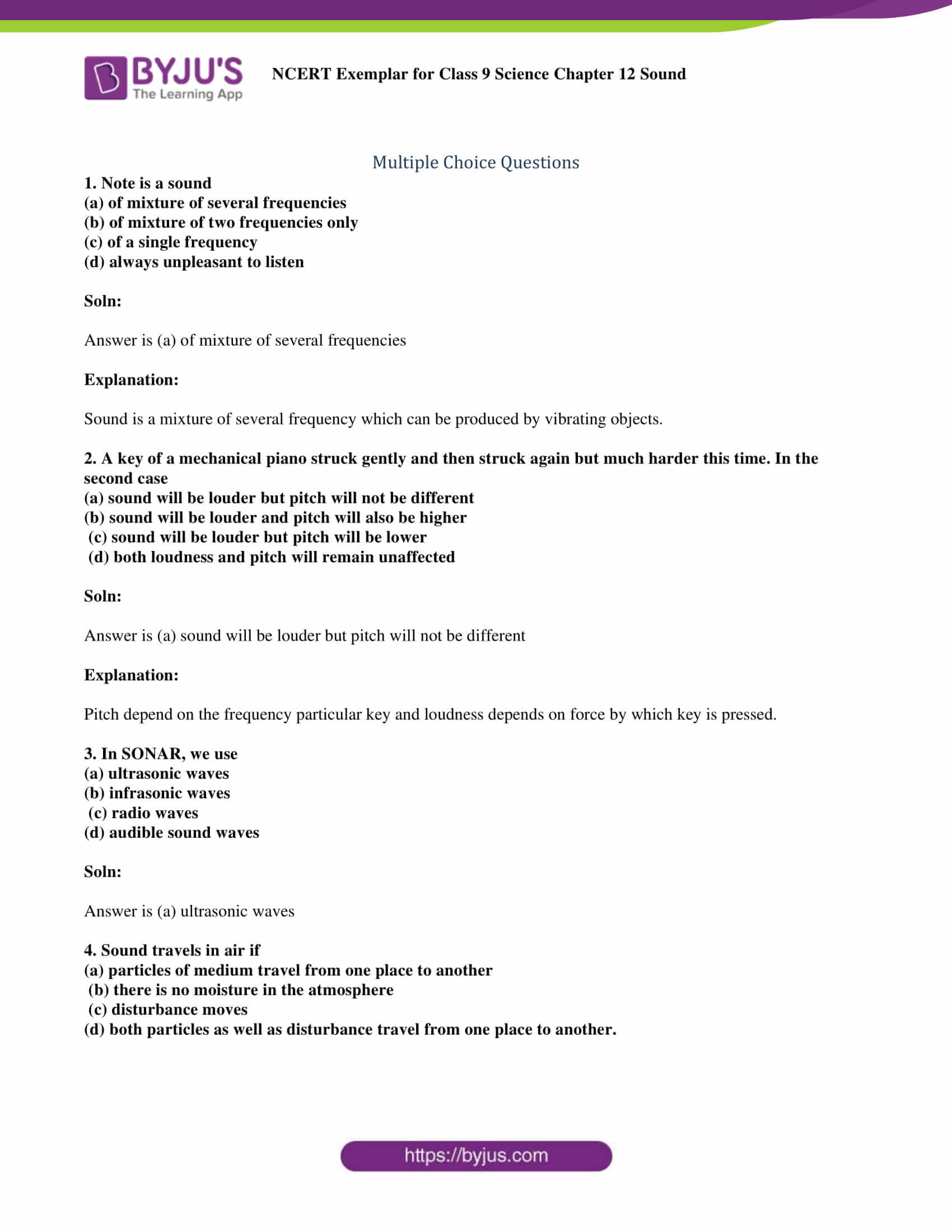 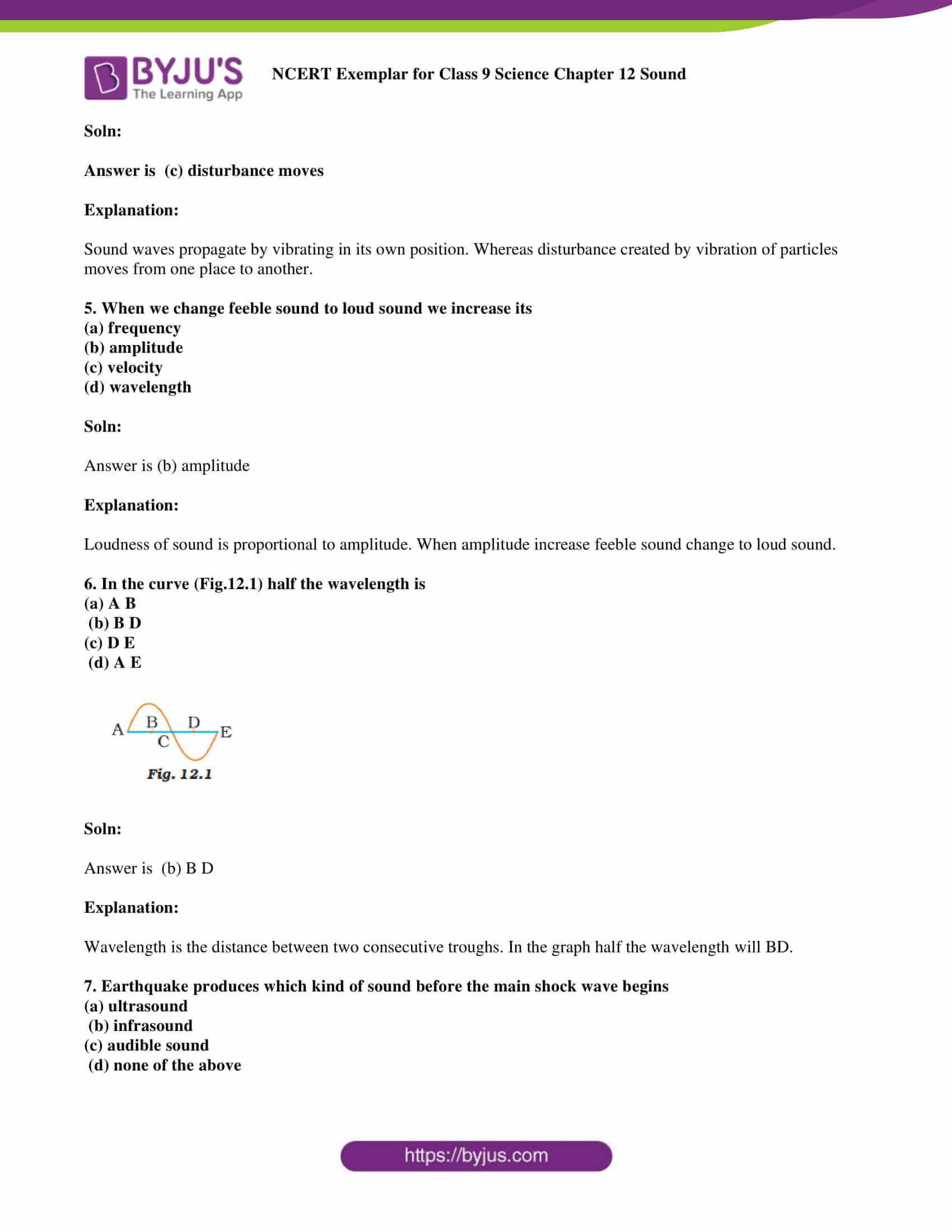 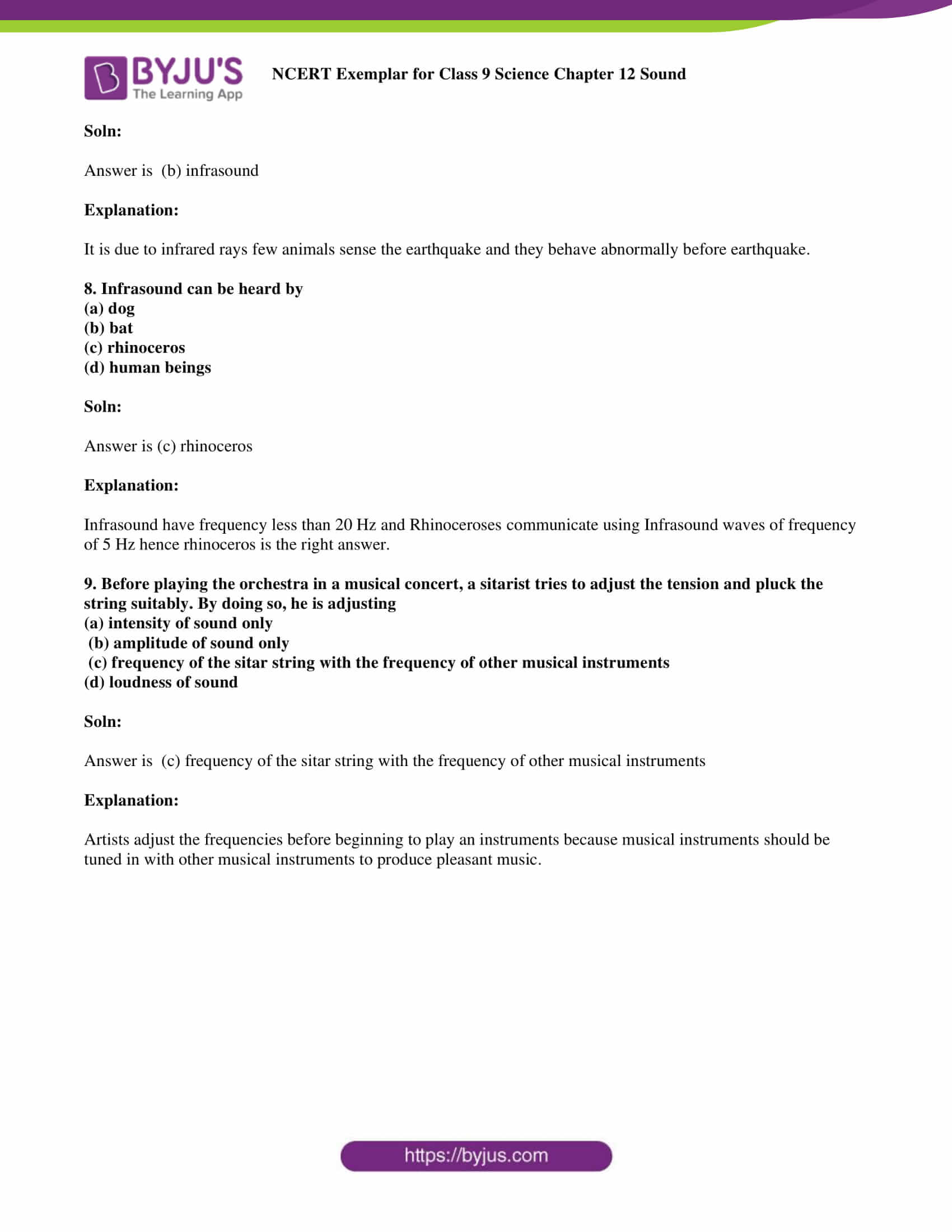 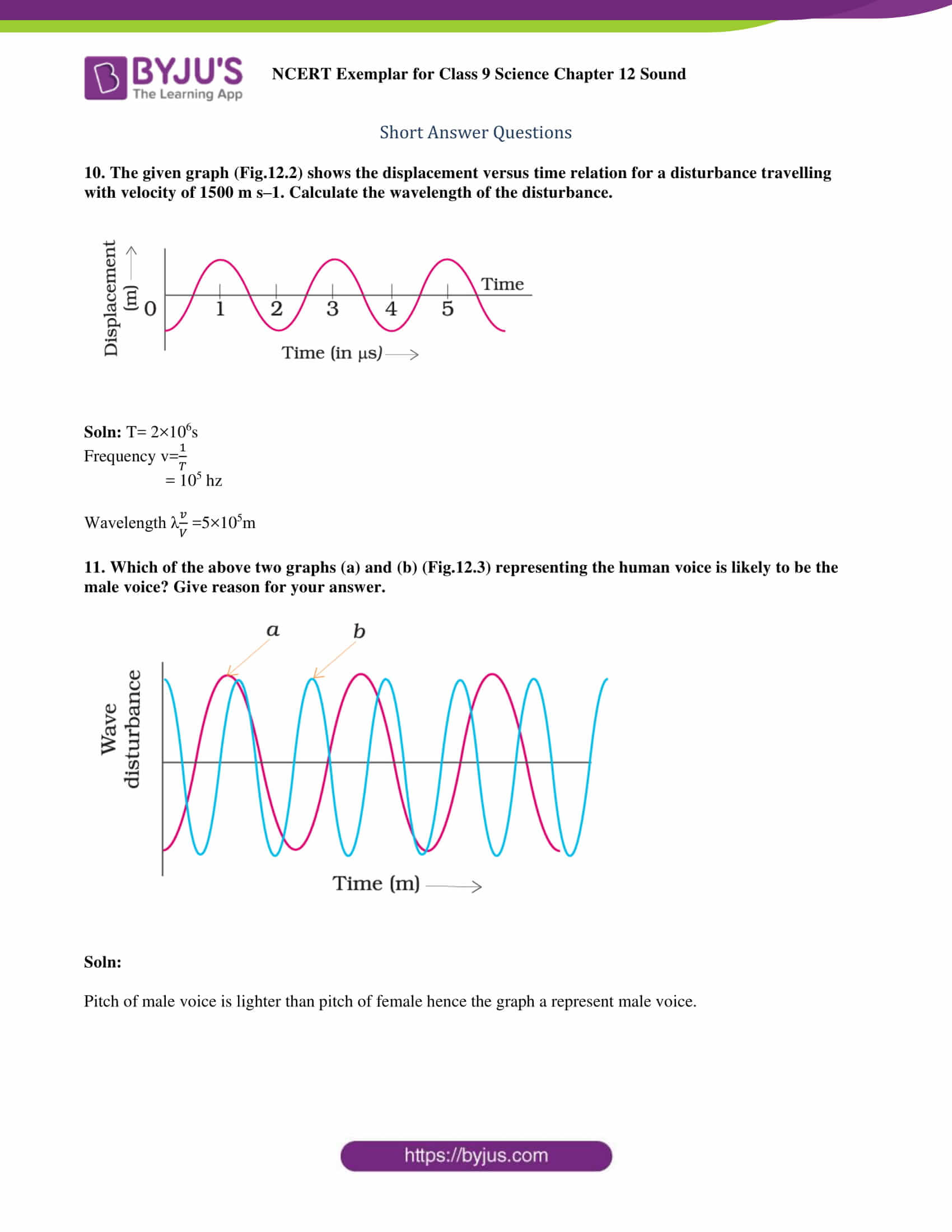 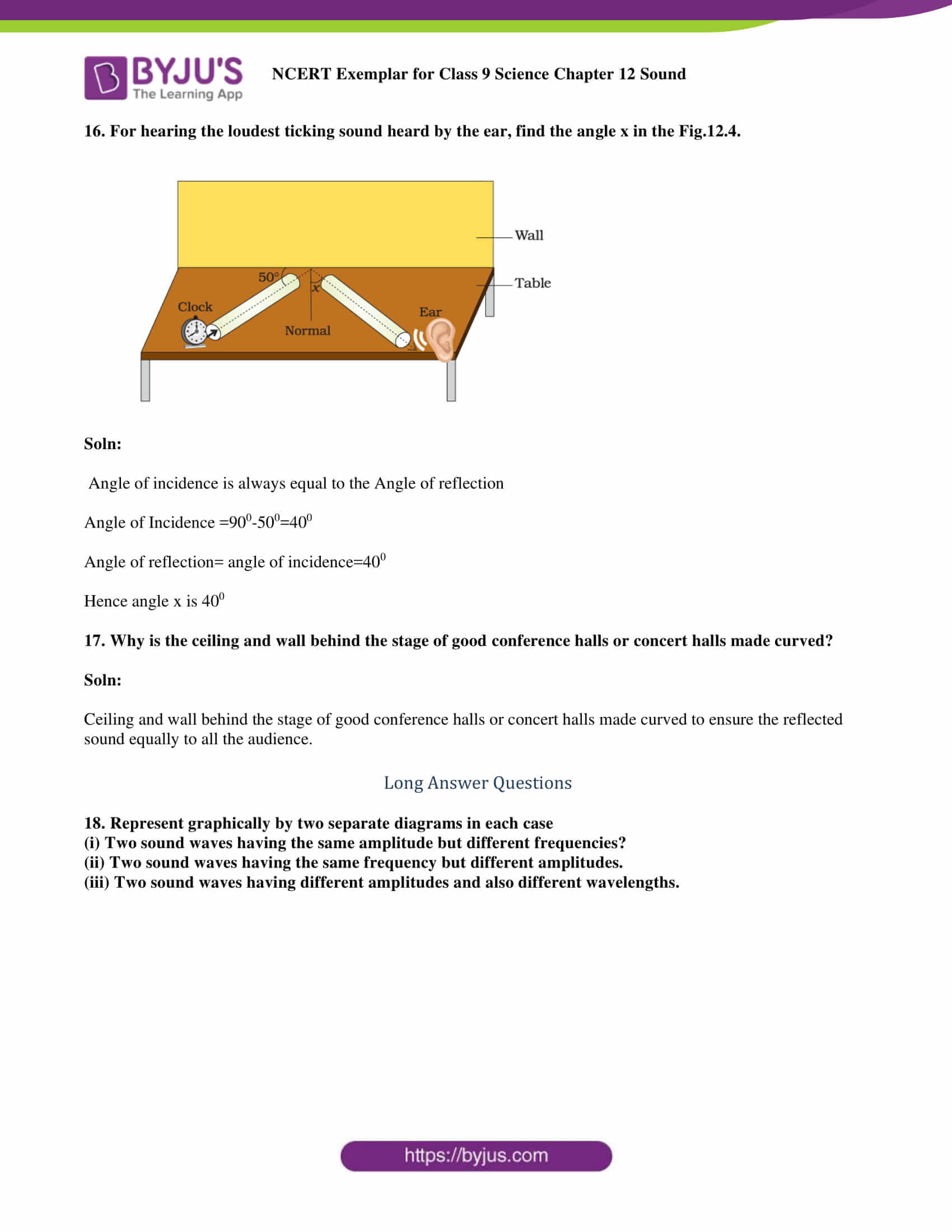 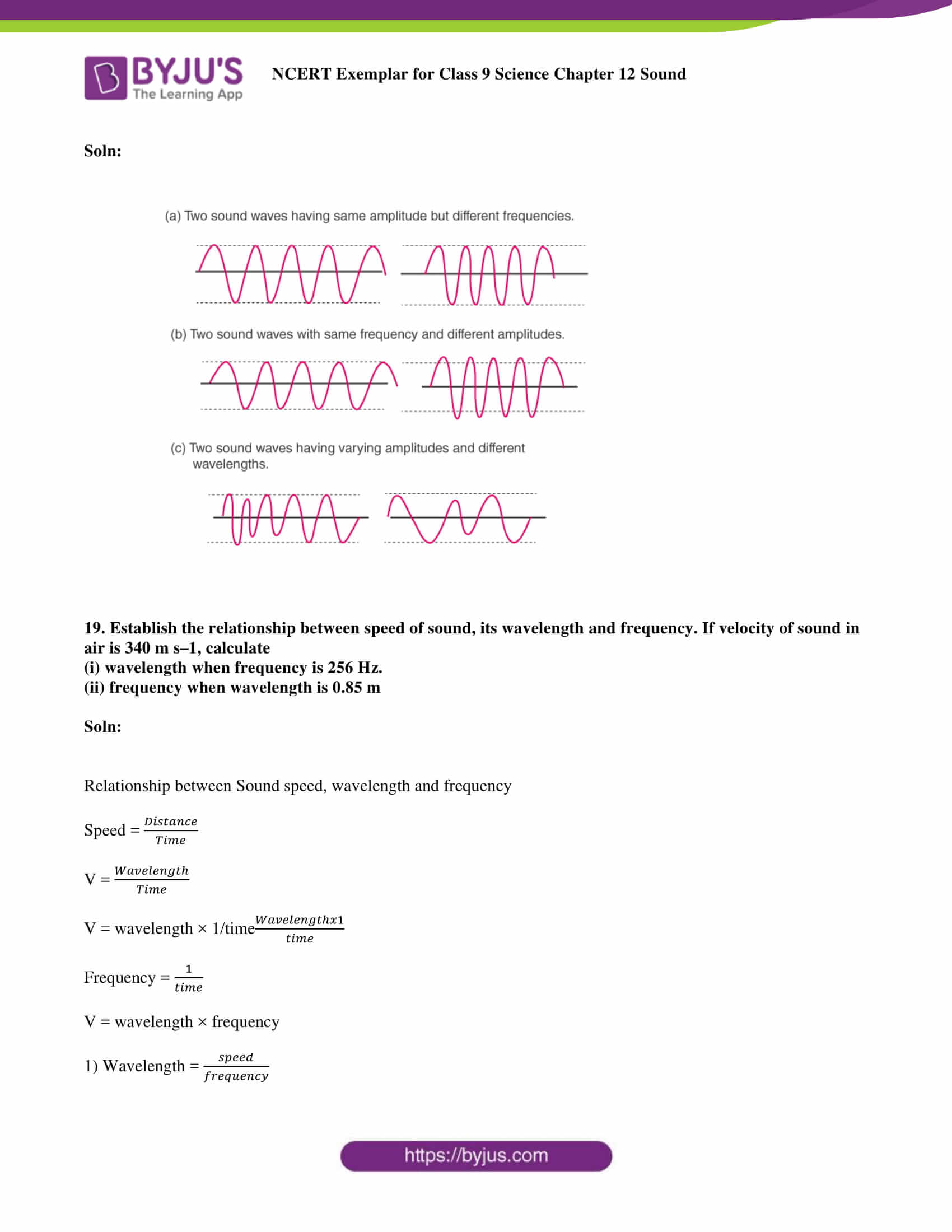 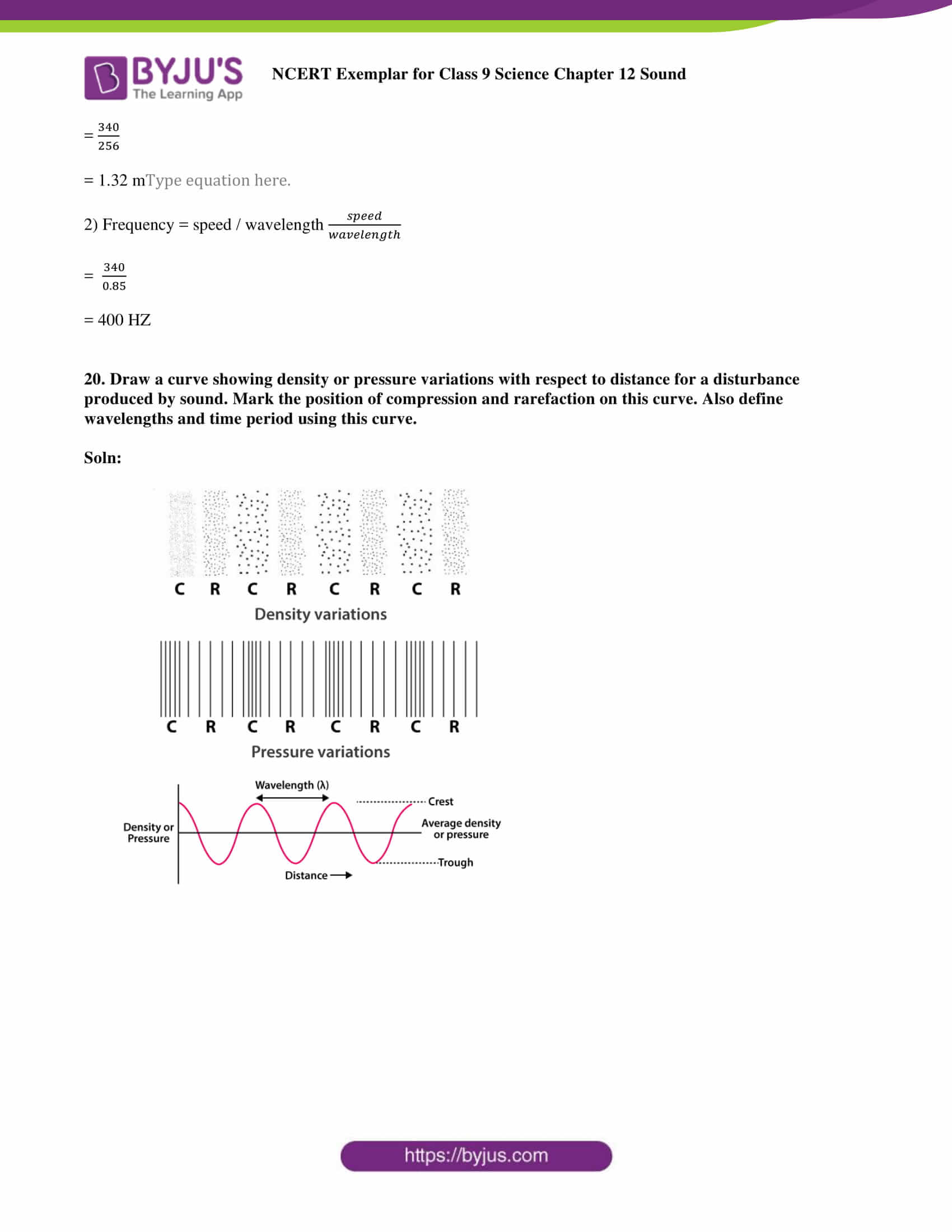 (a) of mixture of several frequencies

(b) of mixture of two frequencies only

(c) of a single frequency

Answer is (a) of mixture of several frequencies

Sound is a mixture of several frequencies which can be produced by vibrating objects.

2. A key of a mechanical piano struck gently and then struck again but much harder this time. In the second case

(a) sound will be louder but pitch will not be different

(b) sound will be louder and pitch will also be higher

(d) both loudness and pitch will remain unaffected

Pitch depend on the frequency particular key and loudness depends on force by which key is pressed.

Answer is (a) ultrasonic waves

4. Sound travels in air if

(a) particles of medium travel from one place to another

(b) there is no moisture in the atmosphere

(d) both particles as well as disturbance travel from one place to another.

Sound waves propagate by vibrating in its own position. Whereas disturbance created by vibration of particles moves from one place to another.

5. When we change feeble sound to loud sound we increase its

Answer is (b) amplitude

Loudness of sound is proportional to amplitude. When amplitude increases feeble sound change to loud sound.

Wavelength is the distance between two consecutive troughs. In the graph half, the wavelength will BD.

7. Earthquake produces which kind of sound before the main shock wave begins

(d) none of the above

Answer is (b) infrasound

8. Infrasound can be heard by

Infrasound have frequency less than 20 Hz and Rhinoceroses communicate using Infrasound waves of the frequency of 5 Hz hence rhinoceros is the right answer.

9. Before playing the orchestra in a musical concert, a sitarist tries to adjust the tension and pluck the string suitably. By doing so, he is adjusting

(a) intensity of sound only

(b) amplitude of sound only

10. The given graph (Fig.12.2) shows the displacement versus time relation for a disturbance travelling with a velocity of 1500 m s–1. Calculate the wavelength of the disturbance.

11. Which of the above two graphs (a) and (b) (Fig.12.3) representing the human voice is likely to be the male voice? Give the reason for your answer. 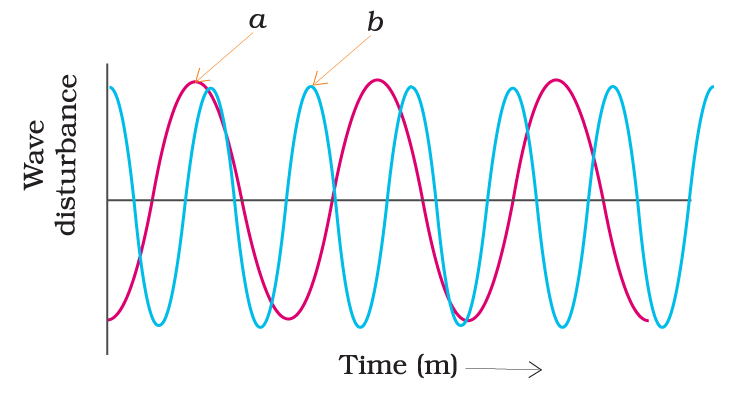 Pitch of a male voice is lighter than the pitch of female hence the graph a represent male voice.

12. A girl is sitting in the middle of a park of dimension 12 m × 12 m. On the left side of it there is a building adjoining the park and on right side of the park, there is a road adjoining the park. A sound is produced on the road by a cracker. Is it possible for the girl to hear the echo of this sound? Explain your answer.

Echo can be heard if the gap between the original sound and reflected sound received by the listener is around 0.1 sec.

Here sound reflects from the building and then reaches the girl which is much smaller than the required distance. Hence echo cannot be heard.

13. Why do we hear the sound produced by the humming bees while the sound of vibrations of a pendulum is not heard?

Humming bees produce the sound by beating their wings and the frequency of the sound they produce will be in the range of 20Hz to 20000 Hz which is audible. On the other hand, pendulum produces sound less than 20 Hz which is below audible range, and we don’t hear the sound of pendulum vibrations.

14. If any explosion takes place at the bottom of a lake, what type of shock waves in water will take place?

The answer is longitudinal waves

15. The sound produced by a thunderstorm is heard 10 s after the lightning is seen. Calculate the approximate distance of the thunder cloud. (Given the speed of sound = 340 m s–1.)

16. For hearing the loudest ticking sound heard by the ear, find the angle x in the Fig.12.4. 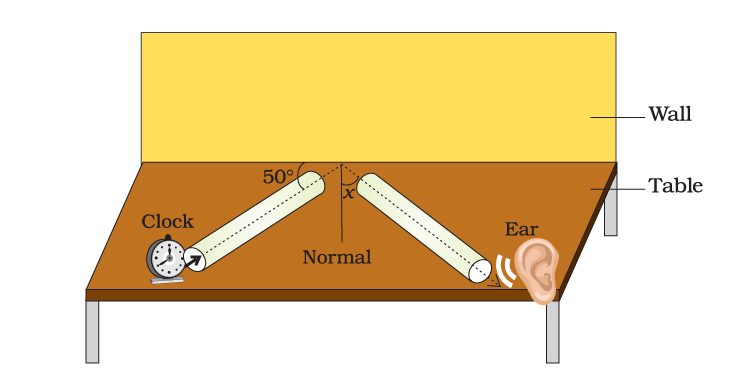 Angle of incidence is always equal to the Angle of reflection

Angle of reflection= angle of incidence=400

17. Why is the ceiling and wall behind the stage of good conference halls or concert halls made curved?

Ceiling and wall behind the stage of good conference halls or concert halls made curved to ensure the reflected sound equally to all the audience.

18. Represent graphically by two separate diagrams in each case

(i) Two sound waves having the same amplitude but different frequencies? 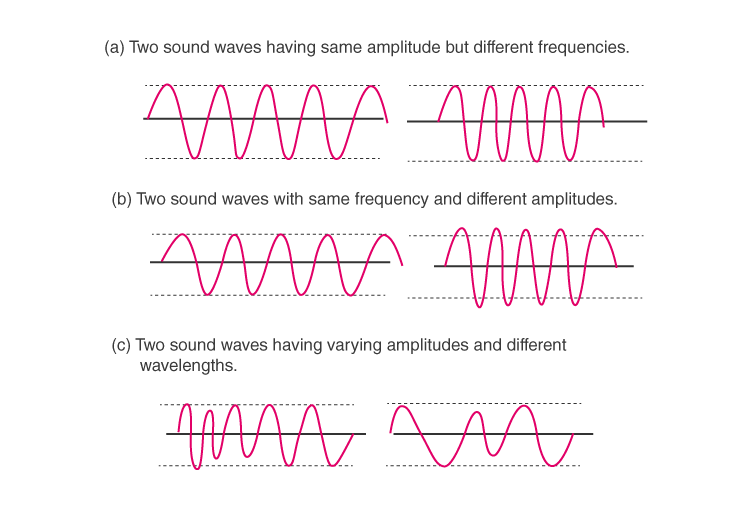 19. Establish the relationship between speed of sound, its wavelength and frequency. If velocity of sound in air is 340 m s–1, calculate

(i) wavelength when frequency is 256 Hz.

(ii) frequency when wavelength is 0.85 m

20. Draw a curve showing density or pressure variations with respect to distance for a disturbance produced by sound. Mark the position of compression and rarefaction on this curve. Also define wavelengths and time period using this curve. 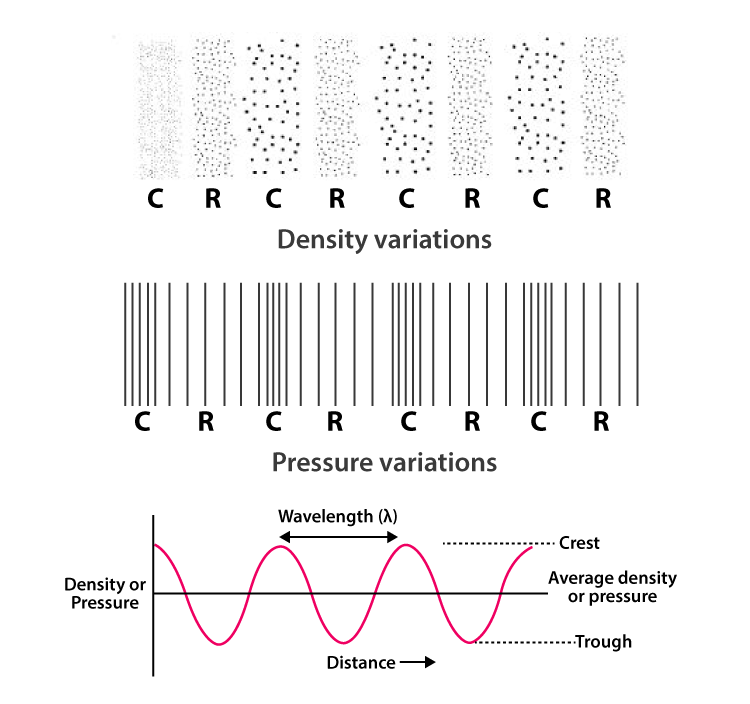 Physics is a tough subject among many subjects, students often struggle to memorise the formulas and derivations. To help students in memorising the concepts and formulas BYJU’S brings you videos, animations, study materials, notes, NCERT Solutions, sample papers and previous year question papers. To get access to all the resource material provided by us, register with BYJU’S or download BYJU’S learning App.

List out the topics covered in the Chapter 12 of NCERT Exemplar Solutions for Class 9 Science.

The topics covered in the Chapter 12 of NCERT Exemplar Solutions for Class 9 Science are –
1. Production of sounds
2. Propagation of sound
3. Sound waves are longitudinal waves
4. Characteristics of the sound wave
5. The pace of sound in different media
6. Reflection of sound
7. Echo
8. Reverberation
9. Range of hearing
10. Applications of ultrasound
11. Sonar
12. Structure of the human ear

Why should the students download the NCERT Exemplar Solutions for Class 9 Science Chapter 12 PDF?

The NCERT Exemplar Solutions for Class 9 Science Chapter 12 PDF contains diagrams and answers for all the questions present in the textbook. Each and every question is answered by keeping in mind the understanding abilities of students. The solutions created strictly adhere to the CBSE syllabus and exam pattern to help students to face the board exams without fear. It also improves the time management skills which is important from the exam point of view.

Explain the concept of reverberation present in the Chapter 12 of NCERT Exemplar Solutions for Class 9 Science?

Reverberation is the phenomenon of persistence of sound after it has been stopped as a result of multiple reflections from surfaces such as furniture, people, air, etc. within a closed surface. These reflections build up with each reflection and decay gradually as they are absorbed by the surfaces of objects in the space enclosed. Reverberations do wonders when it comes to musical symphonies and orchestra halls, when the right amount of reverberation is present, the sound quality gets enhanced drastically. This is the reason why sound engineers are appointed during the construction of these halls.
Also, Read