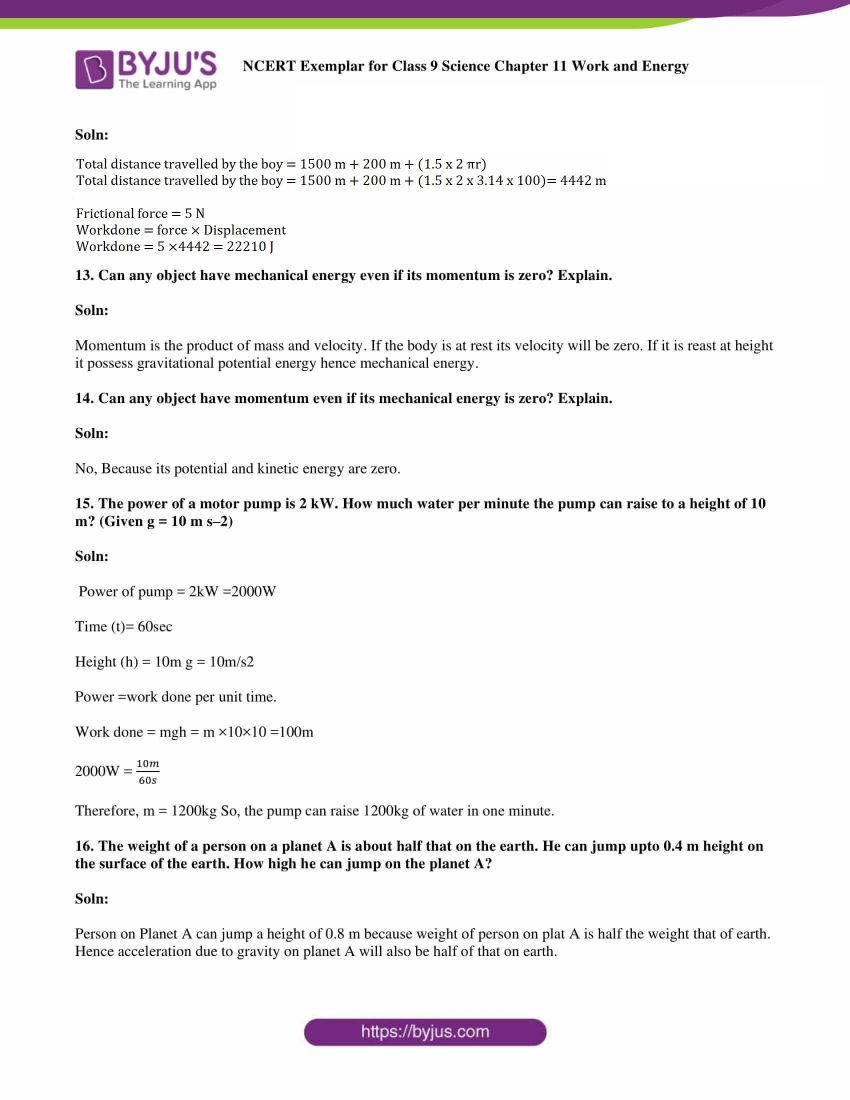 1. When a body falls freely towards the earth, then its total energy

(d) first increases and then decreases

Body falling freely towards the earth possess the same kinetic and potential energy and it follows the Law of conservation of energy hence its total energy remains constant.

2. A car is accelerated on a levelled road and attains a velocity 4 times of its initial velocity. In this process the potential energy of the car

(a) does not change

(b) becomes twice to that of initial

(c) becomes 4 times that of initial

(d) becomes 16 times that of initial

Answer is (a) does not change

3. In case of negative work the angle between the force and displacement is

4. An iron sphere of mass 10 kg has the same diameter as an aluminium sphere of mass is 3.5 kg. Both spheres are dropped simultaneously from a tower. When they are 10 m above the ground, they have the same

Here Direction of work done is perpendicular to gravitational force direction. Hence the work done against the gravity is zero.

6. Which one of the following is not the unit of energy?

Kilowatt is the SI Unit of electrical power

7. The work done on an object does not depend upon the

(c) angle between force and displacement

(d) initial velocity of the object

Answer is (d) initial velocity of the object

8. Water stored in a dam possesses

(a) only potential energy

(b) only kinetic energy

(c) half potential and half kinetic energy

Answer is (c) half potential and half kinetic energy

10. A rocket is moving up with a velocity v. If the velocity of this rocket is suddenly tripled, what will be the ratio of two kinetic energies?

12. A boy is moving on a straight road against a frictional force of 5 N. After travelling a distance of 1.5 km he forgot the correct path at a round about (Fig. 11.1) of radius 100 m. However, he moves on the circular path for one and half cycle and then he moves forward upto 2.0 km. Calculate the work done by him. 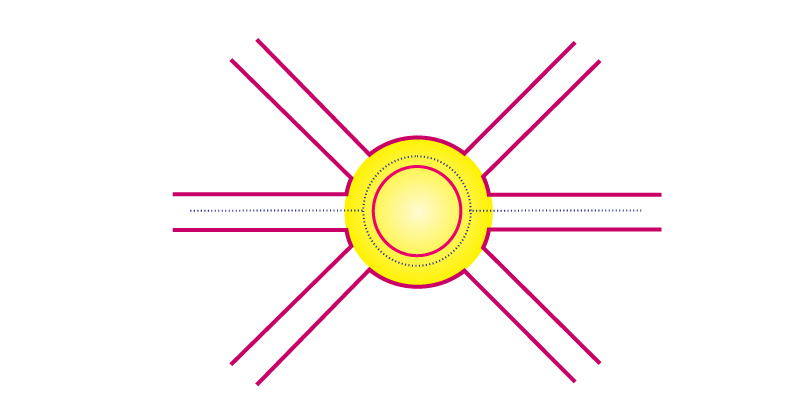 13. Can any object have mechanical energy even if its momentum is zero? Explain.

Momentum is the product of mass and velocity. If the body is at rest its velocity will be zero. If it is rest at the height it possesses gravitational potential energy hence mechanical energy.

14. Can any object have momentum even if its mechanical energy is zero? Explain.

No, Because its potential and kinetic energy are zero.

16. The weight of a person on a planet A is about half that on the earth. He can jump upto 0.4 m height on the surface of the earth. How high he can jump on the planet A?

17. The velocity of a body moving in a straight line is increased by applying a constant force F, for some distance in the direction of the motion. Prove that the increase in the kinetic energy of the body is equal to the work done by the force on the body.

18. Is it possible that an object is in the state of accelerated motion due to external force acting on it, but no work is being done by the force? Explain it with an example.

Force always acts in perpendicular to the displacement direction. If the object is moving in circular path then no work will be done despite of action of a force.

when 40% energy is reduced remaining energy will be 60mjoules

20. If an electric iron of 1200 W is used for 30 minutes everyday, find electric energy consumed in the month of April.

Number of days in the month of April=30days

Therefore, The Total Electricity consumed in April month is 18 units

21. A light and a heavy object have the same momentum. Find out the ratio of their kinetic energies. Which one has a larger kinetic energy?

Kinetic energy of two objects will be the same if their mass and momentum are the same. Among light and heavy bodies, Heavy body has highest momentum. When the momentum is the equal light body has more kinetic energy.

22. An automobile engine propels a 1000 kg car (A) along a levelled road at a speed of 36 km h–1. Find the power if the opposing frictional force is 100 N. Now, suppose after travelling a distance of 200 m, this car collides with another stationary car (B) of same mass and comes to rest. Let its engine also stop at the same time. Now car (B) starts moving on the same level road without getting its engine started. Find the speed of the car (B) just after the collision.

car A moves with a uniform speed, which means engine of car applies a force equal to the frictional force

Initial velocity of the trolley,u = 4 m/s

Final velocity of the trolley v = 0

Distance covered by the trolley before coming to rest,s = 16 m

(a) How much work is done by the men in lifting the box?

(b) How much work do they do in just holding it?

c) While holding the box they apply a muscular force which is equal and opposite to the gravitational force hence they feel tired while holding box.

25. What is power? How do you differentiate kilowatt from kilowatt-hour? The Jog Falls in Karnataka state are nearly 20 m high. 2000 tonnes of waterfalls from it in a minute. Calculate the equivalent power if all this energy can be utilized? (g = 10 m s–2)

Power is the rate of transfer of energy or the rate of doing work. Watt is the unit of power and kilowatt is 1000 watts.

Power of an object which does work at 1 Joule/sec is called watt.

Class 9 Science Chapter 11 Work and Energy is a very basic chapter that will help you in all your future endeavors. Numerical problems in this topic are often asked in competitive examinations. Hence to help students in understanding this topic thoroughly BYJU’S bring you effective videos, animations, and notes. To get all the benefits provided by BYJU’S subscribe to BYJU’S YouTube channel or download BYJU’S Learning App.

What will I get by learning Chapter 11 of the NCERT Exemplar Solutions for Class 9 Science?

The NCERT Exemplar Solutions for Class 9 Science Chapter 11 provides a clear idea about the work and energy. Forms of energy and kinetic energy are also explained in this chapter. The concept of potential energy is explained in a simple language to help students score well in the board exams. The Law of conservation of energy and the rate of doing work are also covered in this chapter based on the CBSE syllabus and guidelines.

What is kinetic energy covered in the Chapter 11 of NCERT Exemplar Solutions for Class 9 Science?

To accelerate an object, we have to apply force. To apply force, we need to do work. When work is done on an object, energy is transferred, and the object moves with a new constant speed. We call the energy that is transferred kinetic energy, and it depends on the mass and speed achieved. The kinetic energy definition in Physics is given as: Kinetic energy of an object is the measure of the work an object can do by virtue of its motion. Kinetic energy is a scalar quantity, and it is entirely described by magnitude alone. These concepts are explained with pictorial representation in the solutions PDF to help students score well in the board exams.

Mention the topics covered in the Chapter 11 of NCERT Exemplar Solutions for Class 9 Science.

The topics covered in the Chapter 11 of NCERT Exemplar Solutions for Class 9 Science are –
1. Work
a. Not much ‘work’ in-spite of working hard
b. The scientific conception of work
c. Work was done by a constant force
2. Energy
a. Forms of energy
b. Kinetic energy
c. Potential energy
d. The potential energy of an object at a height
e. Are various energy forms interconvertible
f. Law of conservation of energy
3. The rate of doing work
a. Commercial unit of energy
Also, Read