Work done on an object is defined as the product of the magnitude of the force acting on the body and the displacement in the direction of the force. W = F.s

If a force acting on a body causes no displacement, the work done is 0. For example, pushing a wall. Energy is defined as the ability to do work. Its unit is the same as that of work.

When two identical bodies are in motion, the body with a higher velocity has more K.E. 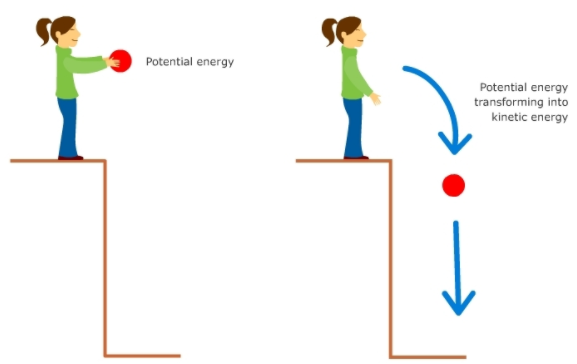 The work-energy theorem states that the net work done by a moving body can be calculated by finding the change in KE.

Energy can get stored in an object when work is done on it.

For example, stretching a rubber string. The energy that is possessed by a body by virtue of its configuration or change in position is known as Potential Energy. 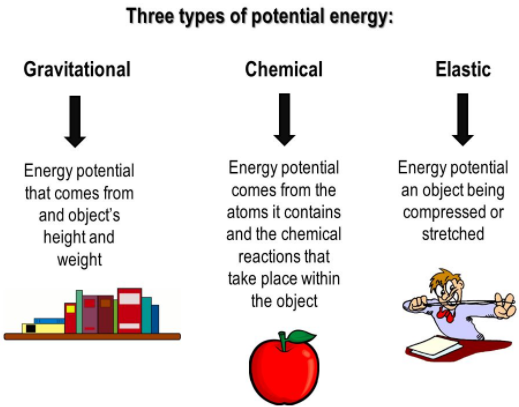 The potential energy of an object at a height.
When an object is raised to a certain height, work is done against gravity to change its position. This energy is stored as Potential Energy.

Law of conservation of energy states that energy can neither be created nor destroyed, but can be transferred from one form to another. The total energy before and after the transformation remains constant.

For example: consider a ball falling freely from a height. At height h, it has only PE = mgh.

By the time it is about to hit the ground, it has a velocity and therefore has KE=  \(\frac{1}{2}\) mv2. Therefore, energy gets transferred from PE to KE, while the total energy remains the same.

The rate of doing work or the rate of transfer of energy is called power. It is denoted by P