NCERT Exemplar Class 9 Science Chapter 3 Atoms and Molecules are essential study materials for CBSE Class 9 students that play a pivotal role in providing a clear understanding of the concepts covered in Class 9 Atoms and Molecules. Students should follow the NCERT Exemplar Solutions provided here in order to score well in Class 9 examination and for a better understanding of chemistry-related topics in future. 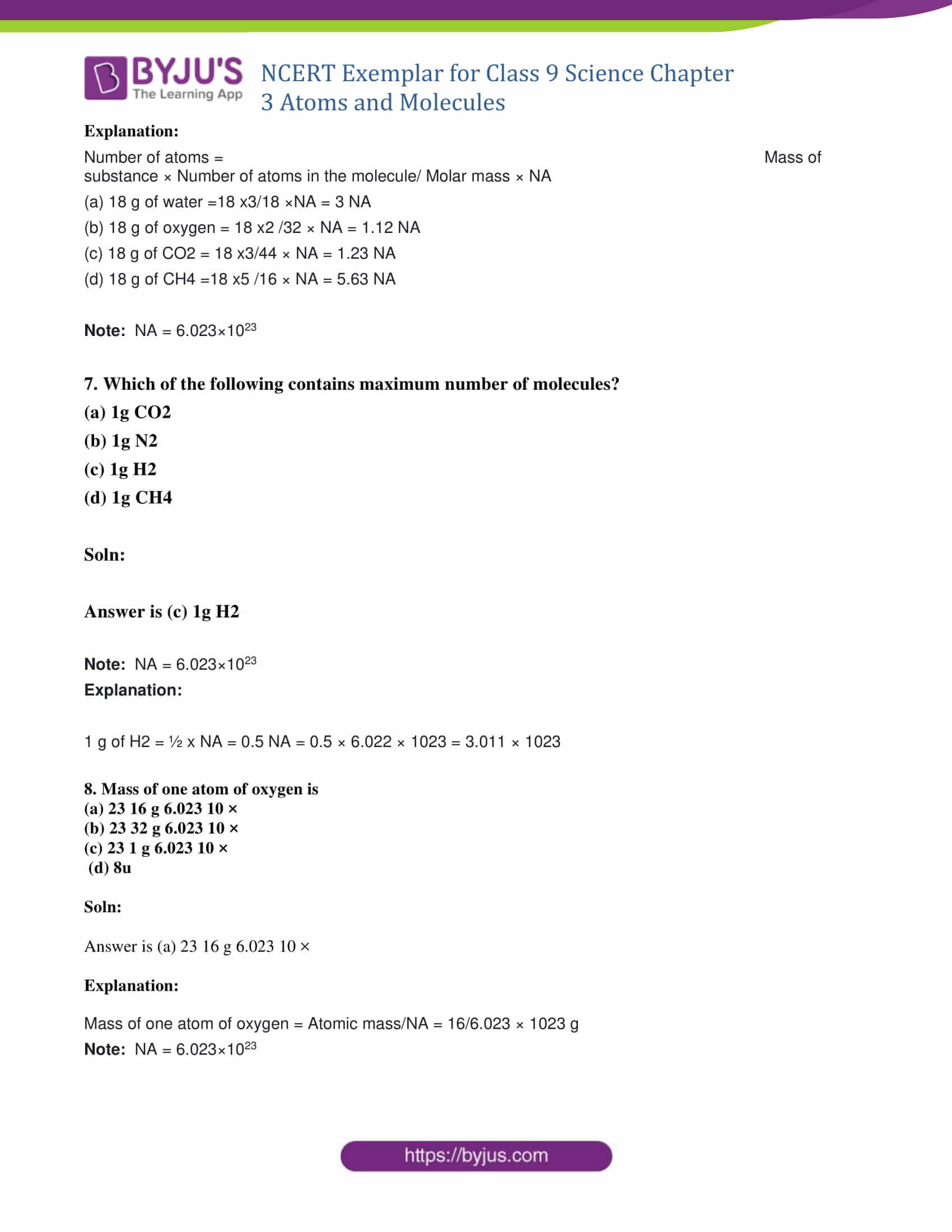 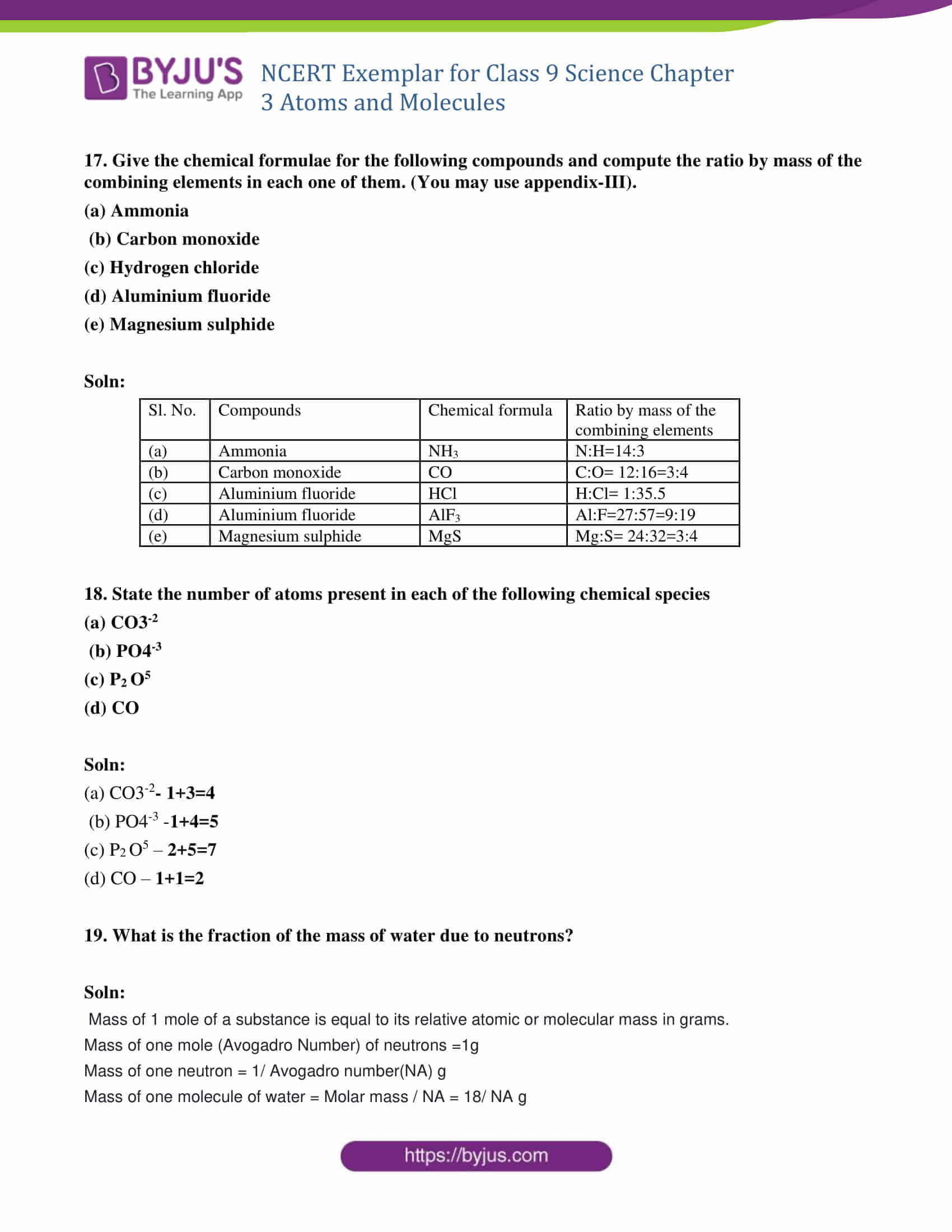 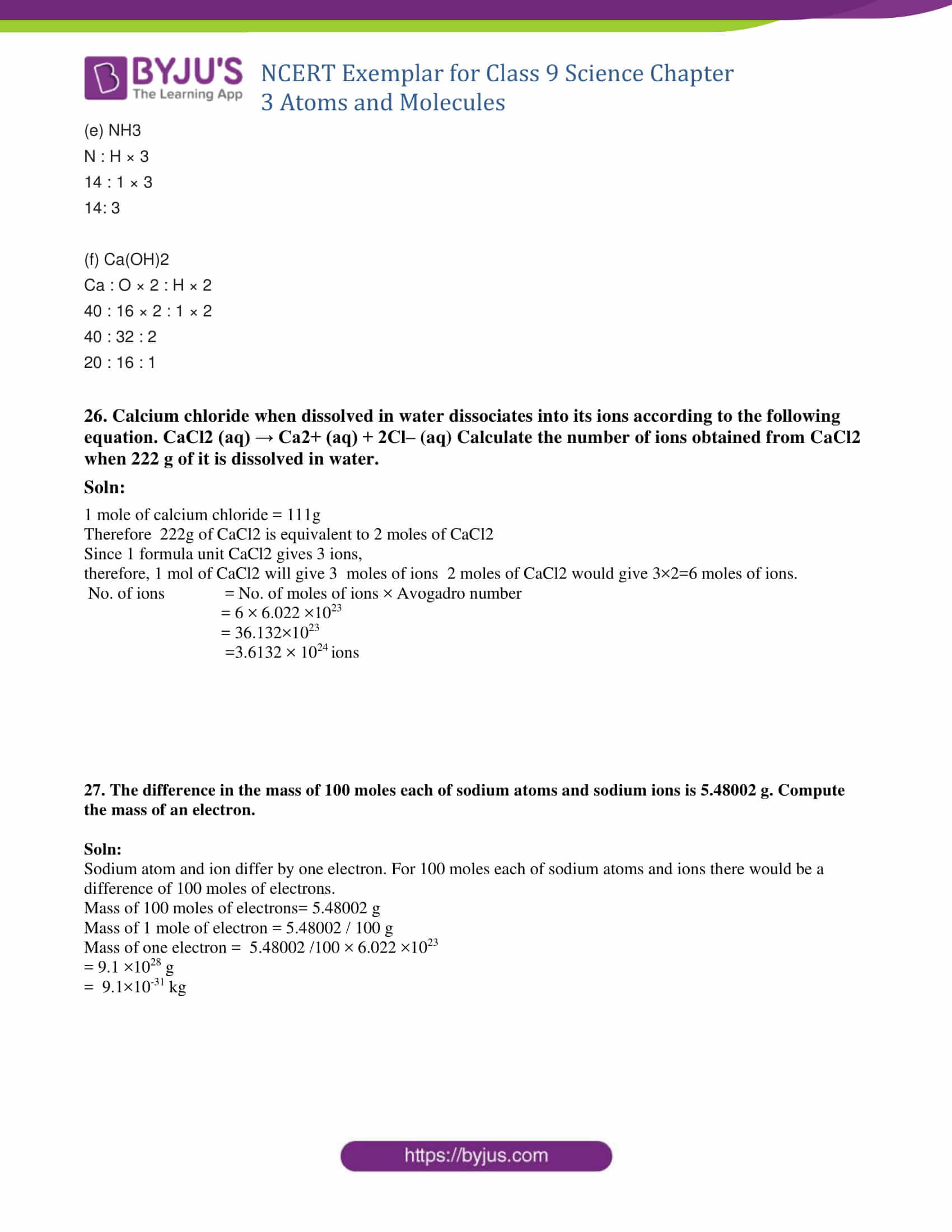 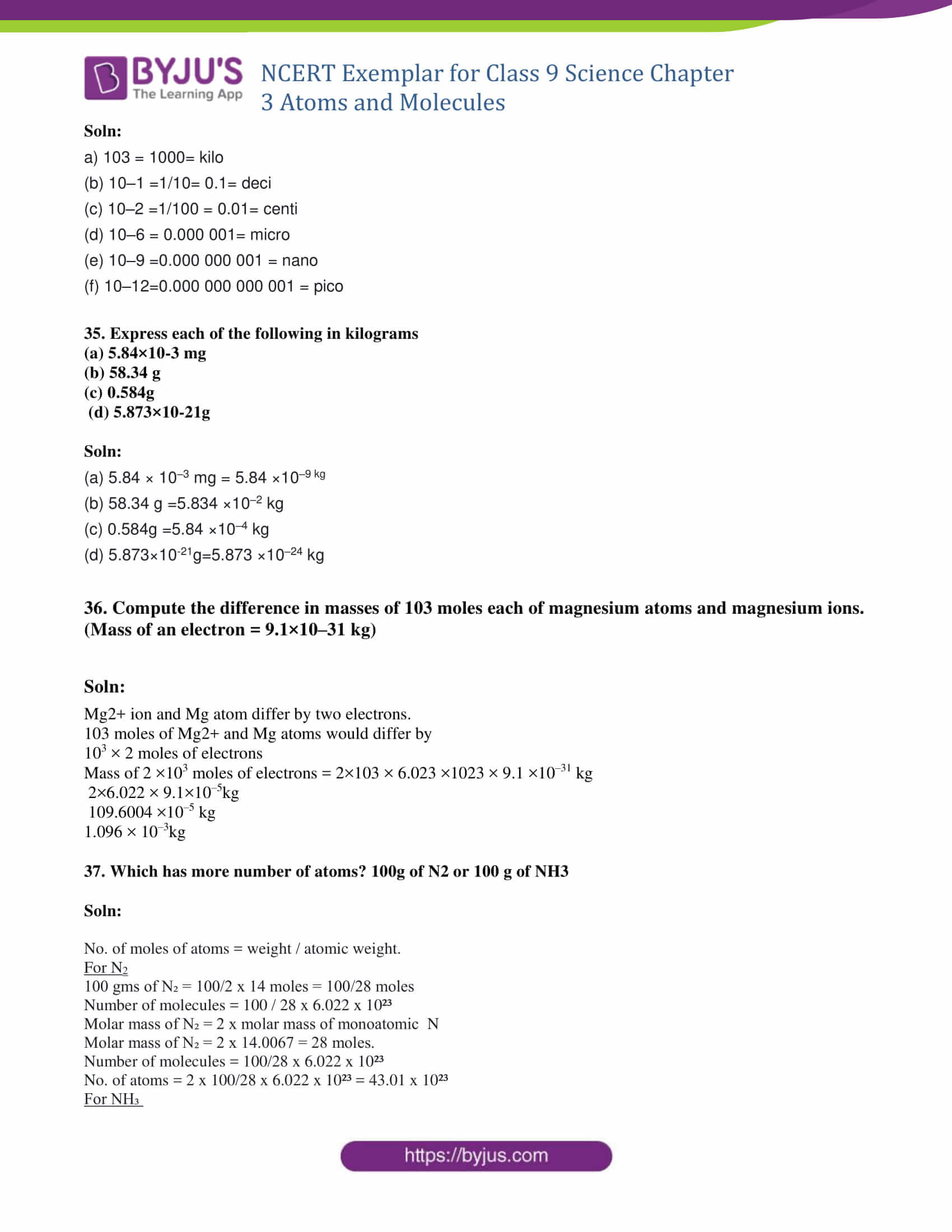 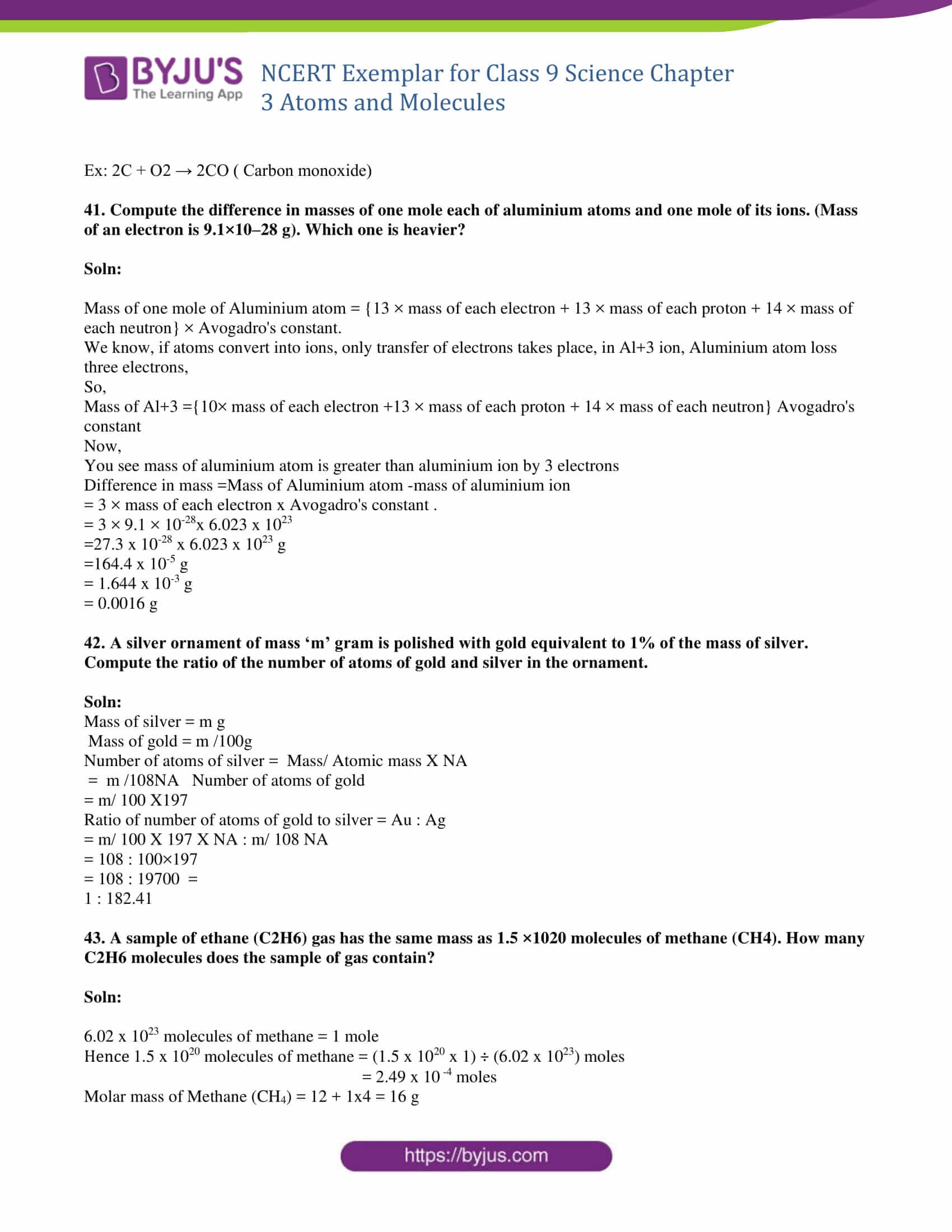 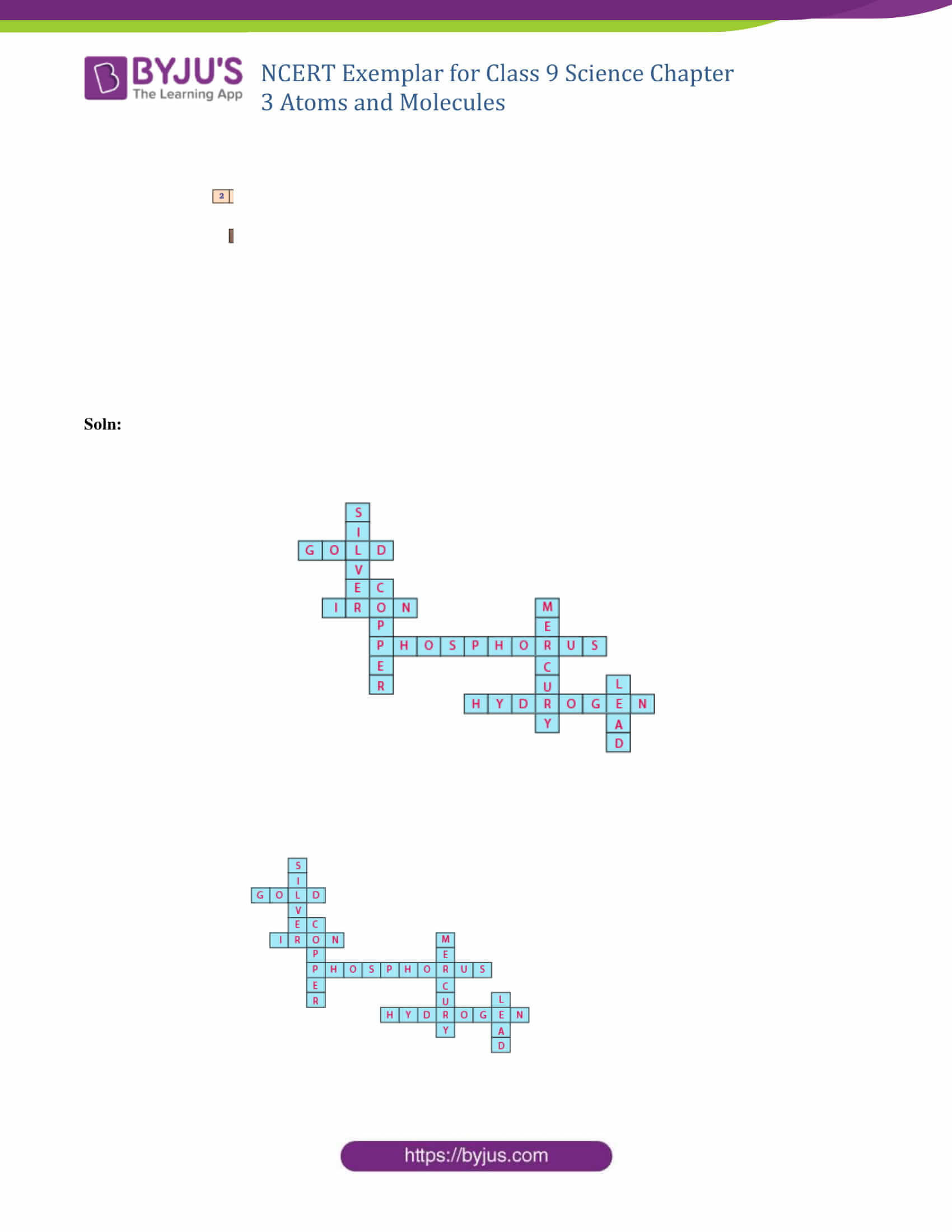 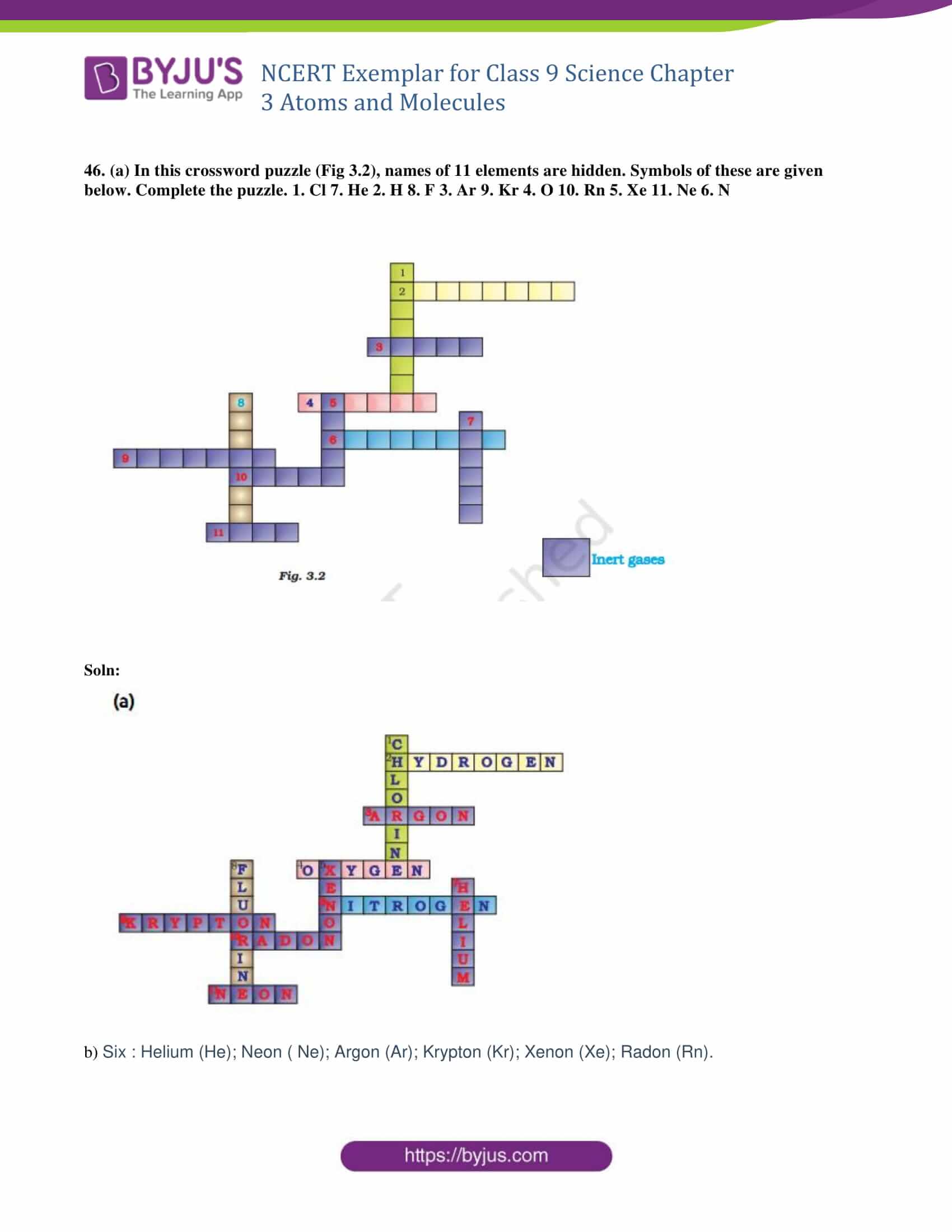 1. Which of the following correctly represents 360 g of water?

2. Which of the following statements is not true about an atom?

(a) Atoms are not able to exist independently

d) Atoms aggregate in large numbers to form the matter that we can see, feel or touch

Answer is (a) Atoms are not able to exist independently

3. The chemical symbol for nitrogen gas is

4. The chemical symbol for sodium is

Sodium word is derived from Latin word Natrium hence the chemical name of sodium is Na.

5. Which of the following would weigh the highest?

6. Which of the following has maximum number of atoms?

7. Which of the following contains maximum number of molecules?

8. Mass of one atom of oxygen is

9. 3.42 g of sucrose are dissolved in 18g of water in a beaker. The number of oxygen atoms in the solution are

10. A change in the physical state can be brought about

(a) only when energy is given to the system

(b) only when energy is taken out from the system

(d) without any energy change

11. Which of the following represents a correct chemical formula? Name it.

Answer is (b) BiPO4, Its name is Bismuth Phosphate

12. Write the molecular formulae for the following compounds

14. Write the cations and anions present (if any) in the following compounds

15. Give the formulae of the compounds formed from the following sets of elements

(a) Calcium and fluorine

(b) Hydrogen and sulphur

16. Which of the following symbols of elements are incorrect? Give their correct symbols

Helium He is the right symbol

Sodium So is wrong, correct symbol is Na

17. Give the chemical formulae for the following compounds and compute the ratio by mass of the combining elements in each one of them. (You may use appendix-III).

18. State the number of atoms present in each of the following chemical species

19. What is the fraction of the mass of water due to neutrons?

Mass of 1 mole of a substance is equal to its relative atomic or molecular mass in grams.

Mass of one mole (Avogadro Number) of neutrons =1g

The molar mass of water is 18.015 g/mol. This was calculated by multiplying the atomic weight of hydrogen (1.008) by two and adding the result to the weight for one oxygen (15.999)

There are 8 neutrons in one atom of oxygen

increases with an increase in temperature.

Therefore the mass is 16

Fraction of mass of water due to neutrons = 8/18 g

20. Does the solubility of a substance change with temperature? Explain with the help of an example.

21. Classify each of the following on the basis of their atomicity.

22. You are provided with a fine white coloured powder which is either sugar or salt. How would you identify it without tasting?

To examine if the fine white coloured powder is sugar pr salt we can conduct two experiments.

Upon heating sugar melts to liquid form because sucrose has a decomposition point and melting point at temperatures between 190 to 192 degrees Celsius. This will turn sugar to light brown colour. On heating further, sugar gets charred to black colour.

Salt has a melting point of 841 degrees Celsius and 1545.8 degrees Fahrenheit. If we don’t heat it to that point no change is observed.

b) Number of moles = w/atomic weight

26. Calcium chloride when dissolved in water dissociates into its ions according to the following equation. CaCl2 (aq) → Ca2+ (aq) + 2Cl– (aq) Calculate the number of ions obtained from CaCl2 when 222 g of it is dissolved in water.

Therefore 222g of CaCl2 is equivalent to 2 moles of CaCl2

No. of ions = No. of moles of ions × Avogadro number

Sodium atom and ion differ by one electron. For 100 moles each of sodium atoms and ions there would be a difference of 100 moles of electrons.

The earth is 2400 times heavier than one mole of screws

30. A sample of Vitamin C is known to contain 2.58 ×1024 oxygen atoms. How many moles of oxygen atoms are present in the sample?

The number of moles= Given number of particles / Avogadro Number

(a) Whose container is heavier?

(b) Whose container has more number of atoms?

b) Both container has an equal number of atoms

34. What is the SI prefix for each of the following multiples and submultiples of a unit?

35. Express each of the following in kilograms

No. of moles of atoms = weight / atomic weight.

38. Compute the number of ions present in 5.85 g of sodium chloride.

40. What are ionic and molecular compounds? Give examples.

While forming some compounds, atoms gain or lose electrons, and form electrically charged particles called ions. Compounds that are formed by the attraction of cations and anions are called as ionic compounds.

Sodium is a group 1 metal, thus forms a +1 charged cation. Chlorine is a non-metal, and has the ability to form a -1 charged anion.

41. Compute the difference in masses of one mole each of aluminium atoms and one mole of its ions. (Mass of an electron is 9.1×10–28 g). Which one is heavier?

42. A silver ornament of mass ‘m’ gram is polished with gold equivalent to 1% of the mass of silver. Compute the ratio of the number of atoms of gold and silver in the ornament.

Ratio of number of atoms of gold to silver =  Au : Ag

(a) In a chemical reaction, the sum of the masses of the reactants and products remains unchanged. This is called ————.

(b) A group of atoms carrying a fixed charge on them is called ————.

45. Complete the following crossword puzzle (Fig. 3.1) by using the name of the chemical elements. Use the data given in Table 3.2. 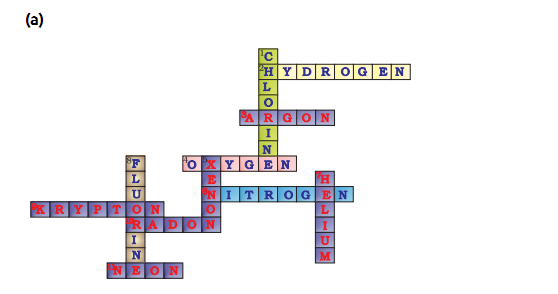 47. Write the formulae for the following and calculate the molecular mass for each one of them.

The formulae for the following and calculate the molecular mass for each one of them.

48. In photosynthesis, 6 molecules of carbon dioxide combine with an equal number of water molecules through a complex series of reactions to give a molecule of glucose having a molecular formula C6H12O6. How many grams of water would be required to produce 18 g of glucose? Compute the volume of water so consumed assuming the density of water to be 1 g cm-3.

Atoms and molecules are one of the most important chapters for CBSE Class 9. In this chapter, the students will learn some important concepts of chemistry like the law of conservation of mass, the law of constant proportions, atomic mass, what a molecule is and how to write a chemical formula. To practice higher-level questions from this chapter, students are advised to follow NCERT Exemplar Science Class 9 Chapter 3 Atoms and Molecules.

BYJU’S provides sample paper for Atoms and Molecules, previous year question papers, NCERT exemplars, worksheets exercises and assignments prepared by highly experienced teachers at BYJU’S. Students can easily access all the study material provided by us just by login into BYJU’S website or by downloading the BYJU’S Learning App.

Explain why the solubility of a substance changes with temperature as explained in Chapter 3 of NCERT Exemplar Solutions for Class 9 Science.

Mention the concepts explained in the Chapter 3 of NCERT Exemplar Solutions for Class 9 Science.

The concepts explained in the Chapter 3 of NCERT Exemplar Solutions for Class 9 Science are
1. Laws Of Chemical Combination
1a) Law of Conservation Of Mass
1b) Law of Constant Proportions
2. What Is An Atom?
(2a) What Are the Modern Day Symbols of Atoms of Different Elements?
(2b) Atomic Mass
(2c) How Do Atoms Exist
3. What Is A Molecule?
(3a) Molecules of Elements
(3b) Molecules of Compounds
(3c) What Is an Ion?
4. Writing Chemical Formulae
(4a) Formulae of Simple Compounds
5. Molecular Mass And Mole Concept
(5a) Molecular Mass Ex
(5b) Formula Unit Mass
(5c) Mole Concept

Why should I use the NCERT Exemplar Solutions for Class 9 Science Chapter 3 while preparing for the exams?

The NCERT Exemplar Solutions for Class 9 Science Chapter 3 provides students with simple and step wise answers to the questions present in the textbook. The solutions are helpful to understand the method of answering the questions in the board exams. Students can save their time and fasten their revision which is very effective for exam preparation. The expert teachers at BYJU’S have designed the solutions based on the CBSE guidelines and syllabus.
Also, Read