SSC MTS Exam is a national level exam held for recruitment of personnel in General Group-C Central Service non-ministerial and non-gazetted posts in various departments, ministries, and offices of the Government of India.

Check SSC Exams for information on other exams conducted by the Staff Selection Commission.

SSC MTS recruitment is organised by the Staff Selection Commission for various posts such as:

The SSC MTS 2020 recruitment process has started from 5th February 2021 to conduct the examination from 1st of July 2021. Candidates can download the SSC MTS 2020 Exam Notification from the PDF Given below-

Recruitment to various Non Technical and Non-Gazetted, Group B and Group C posts under SSC, RRB and IBPS, to be conducted through a Common Eligibility Test (CET). The National Recruitment Agency has been set for the same and aspirants can know more about the same at the linked article.

The dates and details of SSC MTS recruitment are highlighted below.

According to the SSC Exam Calendar for the year 2021-22, the official notification for SSC MTS will be released on 22nd March 2022. The tentative SSC MTS 2021 exam schedule is given below:

As per the SSC Exam Calendar 2021, the official notification for SSC MTS 2020 recruitment is announced by February 5th 2021 and the tentative SSC MTS 2020 exam schedule is given below.

Candidates preparing for SSC MTS exam can check the following links for their SSC Preparation:

For the year 2020, SSC MTS vacancy will be notified by the commission soon.

In the meantime, candidates can check the number of SSC MTS vacancy released for 2019 recruitment to get an idea of the expected vacancy in the next recruitment.

A total of 7099 vacancies were released by SSC for MTS 2019 exam. The details of SSC MTS vacancy is as mentioned below.

The SSC MTS Vacancy category-wise, region-wise and according to the age-group is given below.

The SSC MTS eligibility criteria are the conditions determined by the SSC; which the candidates are required to fulfill mandatorily to be eligible for the SSC Multi Tasking Staff examination.

A candidate must be a citizen of India, either/or a subject of Nepal/Bhutan, Tibetan refugee settled in India before January 1, 1962, or any person of Indian origin.

Candidates are required to present the Certificate of Eligibility issued by the Indian Government (if he/she belongs to a country other than India i.e. Nepal, Bhutan, Tibet, Pakistan, Burma, etc.)

Candidates willing to appear for SSC MTS 2020 examination must possess a pass certificate of matriculation or an equivalent examination from a government recognized board as on August 1, 2020.

In case any candidate does not possess the qualifying examination before the closing date of application form receipt, that candidate is not permitted to apply.

However, for candidates belonging to reserved categories such as PwD, SC/ST and OBC categories, there is an upper age limit relaxation being given by the commission.

The table given below shows the age limit extensions given to different category candidates.

There are other categories as well that are allowed certain relaxation on the age limit for MTS exam. Candidates can check the official SSC MTS notification for further details.

The salary of SSC MTS is revised after the 7th Pay Commission application. Currently, the in-hand salary of SSC Multitasking Staff is approximately 18,000/ to 22,000/ per month.

The SSC MTS recruitment is announced by the Commission with the release of SSC Multitasking Staff notification. The SSC MTS Notification 2020 is released on 5th February 2021. Candidates willing to appear for SSC MTS 2020 exam must keep abreast about the details mentioned in the SSC MTS notification.

Candidates willing to appear for SSC MTS recruitment exam must be well versed with the latest exam pattern of SSC MTS.

The SSC MTS exam pattern is decided by the commission itself. Any changes in the exam pattern are intimated to candidates through official notice.

The SSC Multi-Tasking Staff exam pattern highlights are given below:

Now that candidates are aware of the SSC MTS Exam Paper Pattern, it is important to understand the SSC MTS Syllabus as well.

The Staff selection commission releases the SSC MTS syllabus along with the notification every year. The syllabus of SSC MTS exam for both paper I and Paper II remains largely the same every year.

The SSC MTS syllabus for both paper I and Paper II as prescribed in the notification of SSC MTS exam is given below: 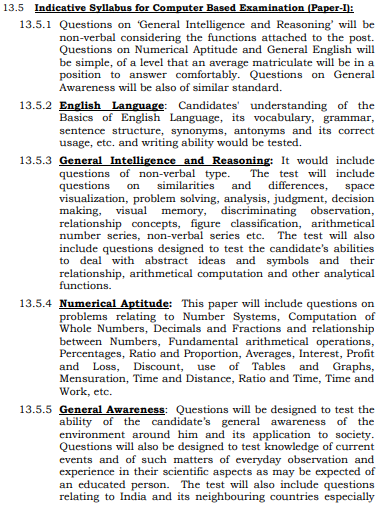 Detailed information regarding SSC MTS syllabus and exam pattern is discussed in the given link.

The admit card for SSC MTS exam is released region-wise on the SSC regions official websites. Candidates, in order to download the SSC MTS Admit Card, have to log in to their registered account on the official website.

Candidates can check SSC MTS Admit Card page to know the important dates pertaining to admit card, the steps to download the Admit Card for MTS exam and for region-wise SSC website links.

The result for SSC MTS exam is published on the SSC website and notified through an official notification.

The Commission releases separate results for SSC MTS exam conducted for age Group 18 to 25 years and 18 to 27 years group in the form of merit list. Candidates short-listed against the age-group of 18-27 years will also be considered for selection in the age-group of 18-25 years and vice versa in the final result depending on the age, merit and State/ UT preference of the candidates.

The Commission decides the minimum Cut off marks for SSC MTS examination. Vacancies for Multi-Tasking Staff (Non-Technical) Examination 2019 have been received in two age groups i.e. (i) 18 to 25 years and (ii) 18 to 27 years.
Therefore, age Group-wise, State or Union Territories wise and category-wise cut-offs have been fixed.

Candidates for each State or Union Territories will be finally selected based on their performance in SSC MTC paper Paper-I, preference of State or UT exercised by them in the online Application Form, subject to their meeting basic qualifying standards in SSC MTS Paper-II.

As per the commission, the qualifying marks in Paper-II have been fixed as  –

Q.1. What are the posts for which the SSC MTS exam is conducted?

Ans. The exam for SSC MTS is conducted to recruit eligible candidates for non-ministerial and Group-C non-gazetted posts in various departments and ministries of Government of India.

Q.3. What is the minimum qualification for SSC MTS exam?

Ans. The minimum education qualification required by candidates to appear for SSC MTS examination is Matriculation certificate i.e. 10th pass certificate from a recognized board.

Q.4. How many stages are there in SSC MTS examination?

Q 5. What is the minimum age to apply for SSC MTS exam?

Ans. Any candidates between the age group of 18 and 27 years can apply for the Multi-tasking staff examination conducted by the SSC.

Q 6. What is the number of vacancies released for SSC MTS exam?

Ans. The vacancies for SSC MTS 2020 will be announced with the recruitment notification. For SSC MTS 2019 exam a total of 7099 vacancies were released.

Q 7. What is the scheme of Negative marking in SSC MTS exam?

Ans. Candidates will lose 0.25 marks for each wrong answer in the SSC MTS examination.