The free SSC CHSL mock tests provided by BYJU’s will help candidates practice and outshine in the examination. Since the competition for SSC exams is really tough, it is imperative for candidates to give a finishing touch to their SSC CHSL preparation with the SSC CHSL Online test series.

Candidates need to have intense focus and dedication to ace SSC CHSL, the lucrative and well-paying job. The SSC CHSL Free Mock Tests will help candidates apprehend their performance and understand the type of questions asked in the SSC CHSL Exam.

The Staff Selection Commission is the conducting body for all SSC exams. One of the most important exams conducted by SSC includes the Combined Higher Secondary Level (CHSL) exam.

Candidates willing to apply for other exams conducted by Staff Selection Commission can visit the SSC exams page.

The SSC CHSL online mock tests comprise 25 questions including questions from the three main sections i.e., reasoning ability, quantitative aptitude and verbal ability. These SSC CHSL free mock tests will help candidates get an idea about the level of questions in the upcoming SSC exams.

SSC CHSL Notification for the year 2020 is released on November 6th 2020. As per the official notification, the SSC CHSL recruitment will be conducted to recruit 4726 personnel for various posts in SSC.

Assess your preparation with SSC CHSL sample papers or model questions covering all sections of the syllabus aligned with the SSC CHSL previous years’ question papers.

The importance of SSC CHSL free online mock tests is highlighted below:

As per the SSC CHSL Notification, the exam is conducted in three stages:

Candidates can refer the below – mentioned table for SSC CHSL exam syllabus in brief:

The SSC CHSL online test series will help aspirants prepare, practise and revise for the actual exam as the questions are prepared based on the latest exam pattern and SSC CHSL syllabus. It will also help aspirants apprehend their performance and preparation by assessing the marks scored in each mock test.

Candidates can refer to the free SSC CHSL Free mock test given below and must attempt the paper to evaluate their performances. The free SSC CGL mock test pattern will be the same as the one given below.

Directions (1-3): Study the data given below and answer the following questions:

The pie chart and the corresponding table gives details about the population of seven different cities. Study the information and then answer the following questions: 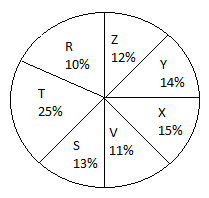 Q 1. What is the total number of people below the poverty line in city X, if the total population of city X is 5,34,000?

Q 2. If the total population of all seven cities is 10,00,000. Then what will be the total number of people living above the poverty line in the city R?

% of people living above the poverty line in city R = 52%

Q 4. Eleven books, consisting of five medical books, four science books and two English books, are arranged in a shelf at random. What is the probability that the books of each kind are all together?

Q 5. The profit earned when Anil sold an article for Rs. 800 is 20 times the loss incurred when it is sold for Rs.275. At what price should Anil sell the article if it is desired to make a profit of 25%.

Directions (8-9): In the given number series, one number is wrong. Choose the number which does not follow the set pattern.

Directions (10-12): Study the information given below and answer the following questions:

Six persons Ajay, Bhanu, Chandan, Dinesh, Elesh and Firoz are sitting around a round table facing the centre of the table. They have ordered different flavours of ice cream – chocolate, strawberry, vanilla, butterscotch, mango and coffee. All the people are wearing T-shirts of different colours, i.e. grey, golden, purple, maroon, pink and orange. Order of the items and colours of T-shirts are not necessarily according to the order of their names.

Q 11. How many people sit between Dinesh and the one who likes chocolate ice cream, when counted anti-clockwise?

Q 12. Which of the given combinations is incorrect? 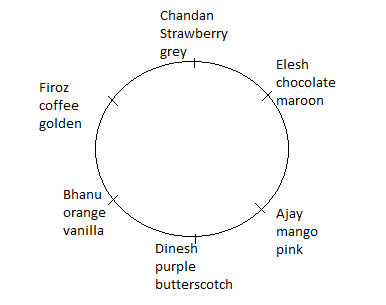 Directions (13-15): Read the information given below and answer the following questions:

‘Dn kn fn vn’ is written as ‘all passengers were late’

Q 14. What will be the code for ‘all passengers punished’?

Directions (16-17): In the following questions, three statements are given followed by two conclusions. Based on the conclusions mark the correct answer:

Statement I: Some ships are boats

Statement II: All boats are submarines

Statement III: Some submarines are ships

Conclusion I: At least submarines are boats

Conclusion II: All boats are ships 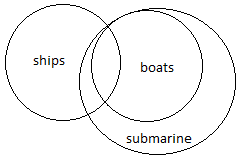 Statement I: All artists are dancers

Statement II: All singers are an athlete

Statement III: Some singers are artists

Conclusion I: Some athletes are artists

Conclusion II: Some dancers are athletes

Y, Z and J are siblings.

Z is the mother of N and O

X is the daughter of Y

O is the daughter of Z

N is the son of Z

Directions (19-20): In the following questions, select the word that fits well in both the two sentences given below.

I: The company ______ a good production year due to a good harvest.

Directions (21-22): In the following questions, a word is given in bold. The word has been used in four different sentences from 1 to 4. Choose the option in which the usage of the word is incorrect.

Q 23. In the question given below, one word is given in bold. From the options, choose the word which is the most similar in meaning:

Q 24. In the question given below, one word is given in bold. From the options, choose the word which is the most opposite in meaning:

Q 25. Select a word from the given options to replace in the black space in the following question.

Candidates must attempt the SSC CHSL free online mock tests for better results. For details regarding other government exams, candidates can visit the linked article.

Candidates must check this page on a regular basis for more free SSC CHSL mock tests.

Q.1. What type of questions are asked in all the phases of SSC CHSL exam?

Ans. Yes, each online mock tests of SSC CHSL gives the answer and detailed solutions to all the questions.

Ans. BYJU’S SSC CHSL Mock Tests are designed by the experts with an aim to provide the best preparation for SSC Combined Higher Secondary Level 2020-21 exam. The full length and section-wise SSC CHSL online mock tests simulate the real exam scenario. The detailed solution of all the questions after each practice paper gives performance reports and thus helps candidates to work on the weak sections to score better marks in the final exams.

Q.4. Can a candidate retake the SSC CHSL practice papers to improve his score?

Ans. As the Free SSC CHSL online mock tests are available in PDF format, candidates can download the pdf and solve the SSC CHSL sample papers offline to practice and improve.

Q 5. How can a candidate choose the right SSC CHSL Sample Papers?

Ans. The digital resource can help candidates find out various SSC CHSL free online mock tests or sample papers, but they must clarify which mock papers will be good enough to help them improve their quality of performance in the SSC CHSL 2020-21 exam. Here the parameters to choose right SSC CHSL sample papers or online test series:

Q.6. How to prepare for SSC CHSL exam in 3 months?

Ans. To prepare effectively for the SSC CHSL Exam one must have a lot of reference books handy. These books help them focus better on the subject matter and ultimately score well in the exam. Some important subject wise SSC CHSL Books along with useful preparation tips are given in the SSC CHSL Preparation page.

Ans. Yes, candidates can download the SSC CHSL Mock Tests PDF and can attempt it offline as many times as they want.