Lysosomes are an important cell organelle found within eukaryotic animal cells. Due to their peculiar function, they are also known as the “suicide bags” of the cell.

The term was coined by Christian de Duve, a Belgian biologist, who discovered it and ultimately got a Nobel Prize in Medicine or Physiology in the year 1974.

Let us have a detailed overview of lysosome structure, functions and diseases associated with it.

“Lysosomes are sphere-shaped sacs filled with hydrolytic enzymes that have the capability to break down many types of biomolecules.”

In other words, lysosomes are membranous organelles whose specific function is to breakdown cellular wastes and debris by engulfing it with hydrolytic enzymes.

Lysosomes are membrane-bound organelles and the area within the membrane is called the lumen, which contains the hydrolytic enzymes and other cellular debris.

The diagram below shows the lysosome structure within a cell.

The pH level of the lumen lies between 4.5 and 5.0, which makes it quite acidic. It is almost comparable to the function of acids found in the stomach.

Besides breaking down biological polymers, lysosomes are also involved in various other cell processes such as counting discharged materials, energy metabolism, cell signalling, and restoration of the plasma membrane.

The sizes of lysosomes vary, with the largest ones measuring in more at than 1.2 μm. But they typically range from 0.1 μm to 0.6 μm.

Why are Lysosomes known as Suicidal Bags?

As stated before, lysosomes work as the waste discarding structures of the cell by processing undesirable materials and degrading them, both from the exterior of the cell and waste constituents inside the cell.

But sometimes, the digestive enzymes may end up damaging the lysosomes themselves, and this can cause the cell to die. This is termed as autolysis, where “auto” means “self” and “lysis” means “the disintegration of the cell by the destruction of its cell membrane“.

Hence, lysosomes are known as “Suicidal Bags” of the cell.

How do the Lysosome function?

Where are Lysosomal Enzymes made?

Lysosomes comprise of over 50 different enzymes. They are synthesized in the rough endoplasmic reticulum.

Once synthesized, the enzymes are brought in from the Golgi apparatus in tiny vesicles or sacs, which then merges with bigger acidic vesicles.

The enzymes produced especially for lysosomes are mixed with the molecule mannose 6-phosphate making them get fixed appropriately up into acidified vesicles.

Production of enzymes of the lysosome is organized by nuclear genes. Nuclear genes are genes which are located within the nucleus of a cell, specifically in eukaryotes.

Any mutations in these genes may result in the emergence of over 30 diverse human genetic ailments, which are collectively called lysosomal storage diseases (LSD).

When such a mutation occurs, the molecules accumulate within the cell and eventually kills it. This can lead to cancer and a host of other diseases ranging from cardiovascular diseases, neurodegenerative disorders and ageing-associated ailments.

Lysosomes are predominantly found in eukaryotic animal cells and are responsible for breaking down cellular debris. In plants, the role of lysosomes is undertaken by the vacuoles as traditional cell biology dictates.

So some botanists have challenged the definition of a vacuole. In other words, it sparked a controversy that pits the definition of the two cellular organelles, with some saying that both perform similar tasks. 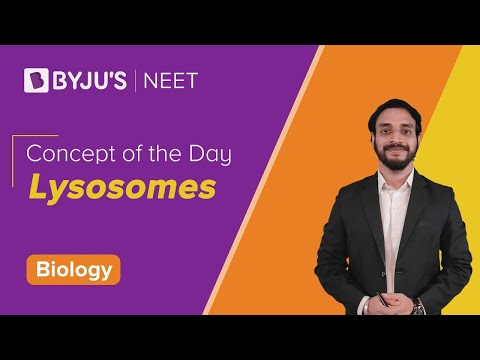 Following are important questions on lysosomes frequently asked in exams.

Lysosomes are defined as sphere-shaped vesicles or sacs filled with hydrolytic enzymes that have the ability to break down almost all types of biomolecules. They essentially help clean up and recycle cellular debris and wastes.

Lysosomes were discovered by a Belgian biologist, Christian de Duve, and was awarded a Nobel Prize in Medicine or Physiology in the year 1974. He is also known for the discovery of other cellular organelles known as peroxisomes.

What type of cells possesses lysosomes?

Do plants cells have lysosomes?

Plants do not possess lysosomes; however, the role of lysosomes are undertaken by the vacuoles.  Findings even suggest that vacuoles contain hydrolytic enzymes similar to the ones found in animal cells.

What is a lumen in a lysosome?

Lumen is the area within the membrane-bound exterior of the lysosome. It contains cellular debris suspended in hydrolytic enzymes. It is also acidic, with a pH ranging between 4.0 to 5.0.

Why are Lysosomes known as Suicidal Bags?

The main function of lysosomes is to breakdown and recycle cellular debris, discarded cellular contents and foreign pathogens, however, the digestive enzymes may end up bursting from the lysosome, damaging the cell themselves, and this can cause the cell to die.

Where are the enzymes needed by lysosomes made?

The enzymes are synthesized in the rough endoplasmic reticulum and once synthesized; the enzymes are brought in from the Golgi apparatus in tiny vesicles, which then fuses with the bigger acidic vesicles in the cells.

What are lysosomal storage diseases?

Any mutations that occur in the nuclear genes may result in over 30 diverse human genetic ailments. These ailments are collectively called lysosomal storage diseases (LSD).