One of the main difference Between Cereals and Pulses is that cereals are produced in larger numbers than pulses because they have high concentrations of carbohydrates. They are also cultivated commercially in high volumes and countries like India, China and Indonesia primarily consume rice as their main staple.

Read on to know what are cereals and pulses, and the difference between the two.

The other main difference between Cereals and Pulses are that pulses lack the carbohydrates that the cereals possess, instead, they are rich in other nutrients such as proteins and amino acids. Other major differences are summarized in the table below: 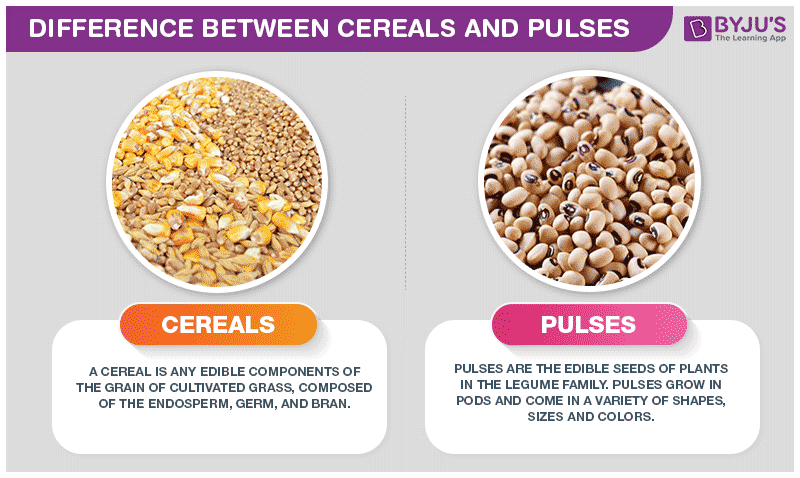 A cereal is any grass cultivated for the edible components of its grain. These are produced in large quantities and provide a large amount of food worldwide than any other crop. These are therefore termed as staple crops.

Cereals are rich in vitamins, proteins, carbohydrates, minerals, fats and oil. They are composed of bran, germ and endosperm. When the bran and germ are removed, the endosperm is known as carbohydrate.

Following are a few examples of cereals:

Pulses are edible seeds of the legume family. They are annual crops and are harvested as dry grains. They are healthy, nutritious and easy to cook.

Hundreds of varieties of pulses are grown throughout the world. The production of pulses improves soil quality, decreases greenhouse gases and requires less water than any other crops.

Following are a few examples of pulses:

Cereals have high concentrations of carbohydrates and pulses are rich in proteins and amino acids. Pulses are also high in Vitamins and minerals such as Vitamin C and Vitamin A. Cereals are also the major staple in many countries including India. Cereals are commercially farmed in huge volumes compared to proteins. In conclusion, pulses and cereals are important food sources.

Cereals are the grains belonging to the grain family. Wheat, rice, corn, millet, rye, and many others. These are rich in carbohydrates.

Pulses are a type of leguminous crops that are harvested for dry seeds only. For eg., lentils, peas, and dried beans. Pulses are a rich source of proteins.

What are the important cereals consumed in the world?

The important cereals consumed in the world include wheat, rice, rye, oats and maize. They are highly nutritious and carry many health benefits.

What are the different types of pulses consumed in the world today?

Which nutrients are found in pulses?

Pulses are a rich source of vitamins and minerals. It abounds in potassium, phosphorus, iron, magnesium, zinc, folate, thiamine and niacin.

Test your Knowledge on difference between cereals and pulses
Q5