The human heart is a muscular organ that is about the size of a fist. It pumps blood through a set of connections between arteries and veins, known as the cardiovascular system. It involves systemic and pulmonary circulation.

“Cardiac cycle refers to the sequence of events that take place when the heart beats.”

What is Cardiac Cycle?

The cardiac cycle attributes to a comprehensive heartbeat from its production to the commencement of the next beat. It comprises of diastole, the systole, and the intervening pause. The occurrence of a cardiac cycle is illustrated by a heart rate, which is naturally indicated as beats per minute. A healthy human heart beats 72 times per minute which states that there are 72 cardiac cycles per minute. The cardiac cycle involves a complete contraction and relaxation of both the atria and ventricles and the cycle last approximately 0.8 seconds. 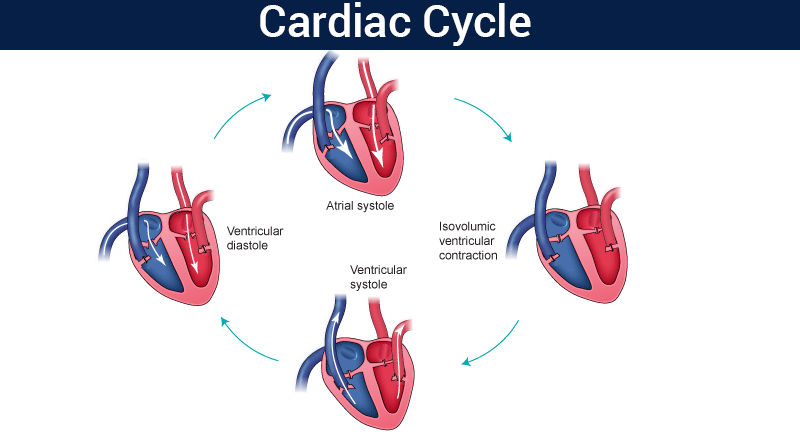 The human heart consists of four chambers, comprising left and right halves. Two upper chambers include left and right atria; lower two chambers include right and left ventricles.  The key function of the right ventricle is to pump deoxygenated blood through the pulmonary arteries and pulmonary trunk to the lungs. While the left ventricle is responsible for pumping newly oxygenated blood to the body through the aorta.

Following are the different phases that occur in a cardiac cycle:

Atrial Systole: At this phase, blood cells flow from atrium to ventricle and at this period, atrium contracts.

Isovolumic Contraction: At this stage, ventricles begin to contract. The atrioventricular valves, valve, and pulmonary artery valves close, but there won’t be any transformation in volume.

Isovolumic Relaxation: In this phase, no blood enters the ventricles and consequently, pressure decreases, ventricles stop contracting and begin to relax. Now due to the pressure in the aorta – pulmonary artery and aortic valve close.

Ventricular Filling Stage: In this stage, blood flows from atria into the ventricles. It is altogether known as one stage (first and second stage). After that, they are three phases that involve the flow of blood to the pulmonary artery from ventricles.

In a normal person, a heartbeat is 72 beats/minute. So, the duration of one cardiac cycle can be calculated as:

At a heartbeat 72 beats/minute, duration of each cardiac cycle will be 0.8 seconds.

Duration of different stages of the cardiac cycle is given below:

Learn more in detail about the Cardiac Cycle,  Its anatomy, diagram, physiology and other related topics @ BYJU’S Biology.

What are the different phases of the cardiac cycle?

The different phases of the cardiac cycle involve:

What happens during systole?

Systole is the period when the heart chambers contract that causes the ejection of blood into the aorta and pulmonary trunk.

Diastole is the part of the cardiac cycle during which the heart refills blood after it is emptied during the systolic phase.

What are the major symptoms of diastolic dysfunction?

The major symptoms of diastolic dysfunction include: