The human body is composed of different types of cells, tissues and other complex organs. For efficient functioning, our body releases some chemicals to accelerate biological processes such as respiration, digestion, excretion and a few other metabolic activities to sustain a healthy life. Hence, enzymes are pivotal in all living entities which govern all the biological processes.

Let us understand what are enzymes, types, their structure, mechanism and various factors that affect its activity.

“Enzymes can be defined as biological polymers that catalyze biochemical reactions.”

The majority of enzymes are proteins with catalytic capabilities crucial to perform different processes. Metabolic processes and other chemical reactions in the cell are carried out by a set of enzymes that are necessary to sustain life.

The initial stage of metabolic process depends upon the enzymes, which react with a molecule and is called the substrate. Enzymes convert the substrates into other distinct molecules, which are known as products.

The regulation of enzymes has been a key element in clinical diagnosis because of their role in maintaining life processes. The macromolecular components of all enzymes consist of protein, except in the class of RNA catalysts called ribozymes. The word ribozyme is derived from the ribonucleic acid enzyme. Many ribozymes are molecules of ribonucleic acid, which catalyze reactions in one of their own bonds or among other RNAs.

Enzymes are found in all tissues and fluids of the body. Catalysis of all reactions taking place in metabolic pathways is carried out by intracellular enzymes. The enzymes in the plasma membrane govern the catalysis in the cells as a  response to cellular signals and enzymes in the circulatory system regulate the clotting of blood. Most of the critical life processes are established on the functions of enzymes.

Enzymes are a linear chain of amino acids, which give rise to a three-dimensional structure. The sequence of amino acids specifies the structure, which in turn identifies the catalytic activity of the enzyme. Upon heating, the enzyme’s structure denatures, resulting in a loss of enzyme activity, which typically is associated with temperature.

Compared to its substrates, enzymes are typically large with varying sizes, ranging from 62 amino acid residues to an average of 2500 residues found in fatty acid synthase. Only a small section of the structure is involved in catalysis and is situated next to the binding sites. The catalytic site and binding site together constitute the enzyme’s active site. A small number of ribozymes exist which serve as an RNA-based biological catalyst. It reacts in complex with proteins.

Earlier, enzymes were assigned names based on the one who discovered them. With further research, classification became more comprehensive.

According to the International Union of Biochemists (I U B), enzymes are divided into six functional classes and are classified based on the type of reaction in which they are used to catalyze. The six kinds of enzymes are hydrolases, oxidoreductases, lyases, transferases, ligases and isomerases.

Listed below is the classification of enzymes discussed in detail:

These catalyze oxidation and reduction reactions, e.g. pyruvate dehydrogenase, catalysing the oxidation of pyruvate to acetyl coenzyme A.

They catalyze the hydrolysis of a bond. For example, the enzyme pepsin hydrolyzes peptide bonds in proteins.

These catalyze the breakage of bonds without catalysis, e.g. aldolase (an enzyme in glycolysis) catalyzes the splitting of fructose-1, 6-bisphosphate to glyceraldehyde-3-phosphate and dihydroxyacetone phosphate.

They catalyze the formation of an isomer of a compound. Example: phosphoglucomutase catalyzes the conversion of glucose-1-phosphate to glucose-6-phosphate (phosphate group is transferred from one to another position in the same compound) in glycogenolysis (glycogen is converted to glucose for energy to be released quickly).

Ligases catalyze the association of two molecules. For example, DNA ligase catalyzes the joining of two fragments of DNA by forming a phosphodiester bond.

There are three kinds of cofactors present in enzymes:

Following are some of the examples of enzymes:

Alcoholic beverages generated by fermentation vary a lot based on many factors. Based on the type of the plant’s product, which is to be used and the type of enzyme applied, the fermented product varies.

For example, grapes, honey, hops, wheat, cassava roots, and potatoes depending upon the materials available. Beer, wines and other drinks are produced from plant fermentation.

Bread can be considered as the finest example of fermentation in our everyday life.

A small proportion of yeast and sugar is mixed with the batter for making bread. Then one can observe that the bread gets puffed up as a result of fermentation of the sugar by the enzyme action in yeast, which leads to the formation of carbon dioxide gas. This process gives the texture to the bread, which would be missing in the absence of the fermentation process.

Enzyme action can be inhibited or promoted by the use of drugs which tend to work around the active sites of enzymes.

Any two molecules have to collide for the reaction to occur along with the right orientation and a sufficient amount of energy. The energy between these molecules needs to overcome the barrier in the reaction. This energy is called activation energy. 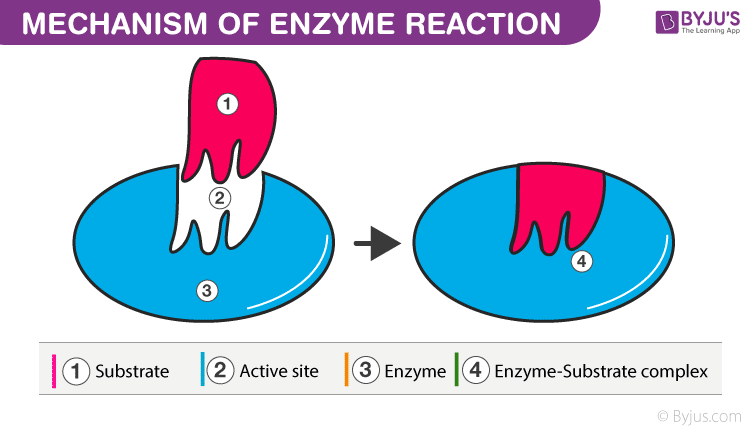 Enzymes are biocatalysts, which are high molecular weight proteinous compounds. It enhances the reactions which occur in the body during various life processes. It helps the substrate by providing the surface for the reaction to occur. The enzyme comprises hollow spaces occupying groups such as -SH, -COOH, and others on the outer surface. The substrate which has an opposite charge of the enzyme fits into these spaces, just like a key fits into a lock. This substrate binding site is called the active site of an enzyme (E).

The favourable model of enzyme-substrate interaction is called the induced-fit model. This model states that the interaction between substrate and enzyme is weak, and these weak interactions induce conformational changes rapidly and strengthen binding and bring catalytic sites close enough to substrate bonds.

There are four possible major mechanisms of catalysis:

The substrate is oriented to active place on the enzymes in such a manner that a covalent intermediate develops between the enzyme and the substrate, in catalysis that occurs by covalent mechanisms. The best example of this involves proteolysis by serine proteases that have both digestive enzymes and various enzymes of the blood clotting cascade. These proteases possess an active site serine whose R group hydroxyl generates a covalent bond with a carbonyl carbon of a peptide bond and results in the hydrolysis of the peptide bond.

Other mechanisms add to the completion of catalytic events which are launched by strain mechanisms such as the usage of glutamate as a general acid catalyst.

Catalysis by Orientation and Proximity

Enzyme-substrate interactions induce reactive groups into proximity with one another. Also, groups like aspartate are chemically reactive, and their proximity towards the substrate favours their involvement in catalysis.

Action and Nature of Enzymes

Step1: Combining of enzyme and the reactant/substrate.

Step 2: Disintegration of the complex molecule to give the product.

Thus, the whole catalyst action of enzymes is summarized as:

Catalysts are the substances which play a significant role in the chemical reaction. Catalysis is the phenomenon by which the rate of a chemical reaction is altered/ enhanced without changing themselves. During a chemical reaction, a catalyst remains unchanged, both in terms of quantity and chemical properties. An enzyme is one such catalyst which is commonly known as the biological catalyst.  Enzymes present in the living organisms enhance the rate of reactions which take place within the body.

Biological catalysts, enzymes, are extremely specific that catalyze a single chemical reaction or some closely associated reactions. An enzyme’s exact structure and its active site decide an enzyme’s specificity. Substrate molecules attach themselves at the active site of an enzyme. Initially, substrates associate themselves by noncovalent interactions to the enzymes which include ionic, hydrogen bonds and hydrophobic interactions. Enzymes reduce the reactions and activation energy to progress towards equilibrium quicker than the reactions that are not catalyzed. Both eukaryotic and prokaryotic cells usually make use of allosteric regulation to respond to fluctuations in the state inside the cells.

The nature of enzyme action and factors affecting the enzyme activity are discussed below.

The conditions of the reaction have a great impact on the activity of the enzymes. Enzymes are particular about the optimum conditions provided for the reactions such as temperature, pH, alteration in substrate concentration, etc. 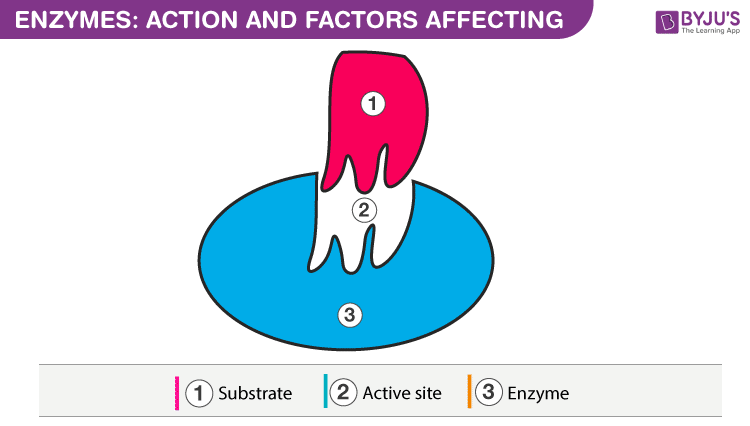 Typically, enzyme activities are accelerated with increasing temperatures. As enzymes are functional in cells, the feasible conditions for nearly all enzymes are temperatures that are moderate. At higher temperatures, given a specific point, there is a drastic decrease in the activity with the denaturation of enzymes. In diluted solutions, purified enzymes denature quickly compared to enzymes in crude extracts. Denaturation of enzymes can also take place when enzymes are incubated for long durations. More appropriate is to utilize a shorter time duration when it comes to incubation time to gauge the starting velocities of such enzyme reactions.

The International Union of Biochemistry suggests the standard assay temperature to be 30 °C. Almost all enzymes are extremely sensitive to pH change. Just some enzymes feasibly operate with pH above 9 and below 5. Most enzymes have their pH – optimum near to neutrality. Any alteration of pH causes the ionic state of amino acid residues to change in the whole protein and in the active site. The modifications in the ionic state can modify catalysis and substrate binding. The preference of substrate concentration is critical as at lower concentrations, the rate is driven by concentration, however, at high concentrations, the rate does not depend on any increase in the concentration of the substrate.

Enzymatic catalysis depends upon the activity of amino acid side chains assembled in the active centre. Enzymes bind the substrate into a region of the active site in an intermediate conformation. 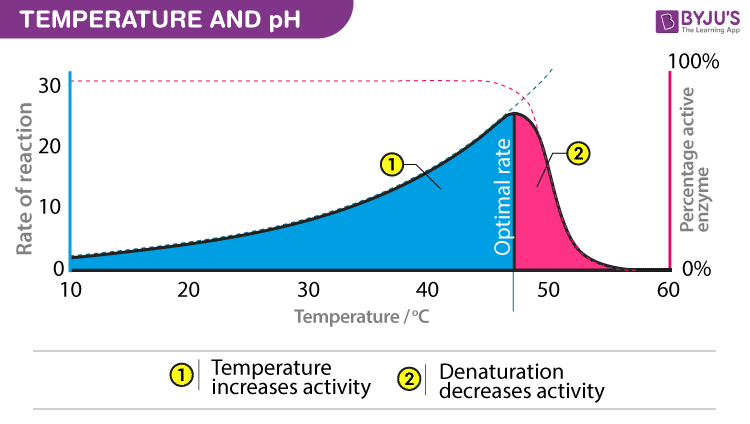 Concentration and Type of Substrate

The enzymes perform a number of functions in our bodies. These include:

Almost all enzymes are proteins, so which enzyme is not a protein?

Ribozyme.
With the exception of ribozymes, all enzymes are protein-based.

Enzymes can be defined as biological polymers that catalyze biochemical reactions.

What is the induced fit theory?

The concept of induced fit states that when a substrate binds to an enzyme, it brings about a change in the shape of the enzyme which either enhances or supresses the activity of the enzyme.

What are the examples of enzymes in plants?

Examples of plant-derived enzymes include amylase, protease and peroxidase.

Can an enzyme be called a polymer?

Yes, most enzymes are made up of proteins which are polymers of amino acids.

What are the types of enzymes present?

The types of enzymes are:

What is an active site of an enzyme?

The enzyme’s active site is a cleft or a pocket within the enzyme where the substrate molecule binds and undergoes chemical reactions to be converted into the product.

Learn more about Enzymes, its structure, classification, functions and other related topics at BYJU’S Biology

Test your Knowledge on Enzymes!
Q5