A nephron is the basic structural and functional unit of the kidney. They are the microscopic structure composed of a renal corpuscle and a renal tubule. The word nephron is derived from the Greek word – nephros, meaning kidney. There are about millions of nephrons in each human kidney.

The mammalian nephron is a long tube-like structure, its length varying from 35–55 mm long. At one end, the tube is closed, folded and expanded, into a double-walled, a cuplike structure called the Bowman’s capsule or renal corpuscular capsule,  which encloses a cluster of microscopic blood vessels called the glomerulus. This capsule and glomerulus together constitute the renal corpuscle. 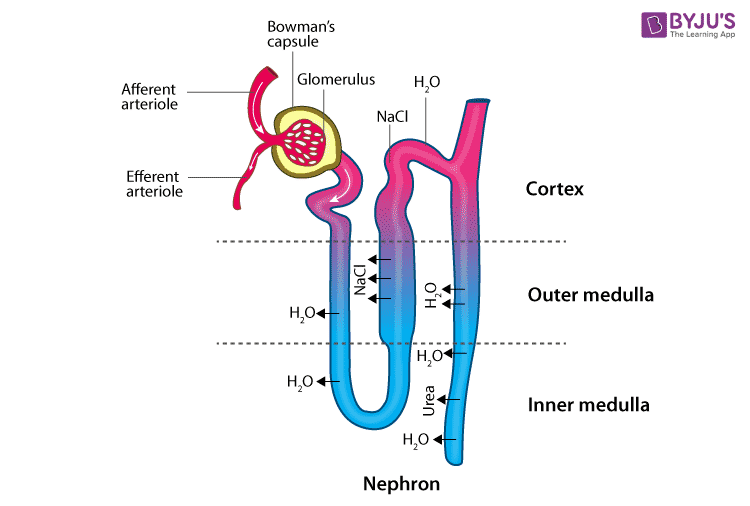 The renal tubule is a long and convoluted structure that emerges from the glomerulus and can be divided into three parts based on function.

The capillaries of the glomerulus are enclosed by a cup-like structure called Bowman’s capsule. This structure extends to form highly coiled tubules called PCT. PCT continues to form the loop of Henle which ascends to DCT, which in turn opens into the collecting duct.

The major function of tubules is reabsorption and the process can either be through active transport or passive transport. In addition, secretions by tubules help in the urine formation without affecting the electrolyte balance of the body.

The blood brought by the renal artery is filtered by the glomerulus and then passed to the PCT. Maximum reabsorption takes place in PCT of the nephron.PCT is the region of renal tubule where reabsorption of essential substances like glucose, proteins, amino acids, a major portion of electrolytes and water takes place. The surface area for reabsorption is facilitated by the lining of the simple cuboidal epithelium in them. Reabsorption takes place at the expense of energy, i.e., the process is active.PCT selectively secretes ions such as hydrogen, ammonia, and potassium into the filtrate and absorbs HCO3–from it. Thus, PCT maintains the electrolyte and acid-base balance of the body fluids.

The DCT, which is the last part of the nephron, connects and empties its contents into collecting ducts that line the medullary pyramids. The collecting ducts amass contents from multiple nephrons and fuse together as they enter the papillae of the renal medulla.

Similar to PCT, DCT also secretes ions such as hydrogen, potassium, and NH3 into the filtrate while reabsorbing the HCO3–from the filtrate. Conditional reabsorption of sodium ions and water takes place in DCT. Thus, it maintains the pH and sodium-potassium level in the blood cells.

Collecting duct is a long, straight tube where H+ and K+ ions are secreted to maintain the electrolyte balance of the blood. This is also the region where the maximum reabsorption of water takes place to produce concentrated urine.

The Bowman’s capsule is divided into three layers:

There are two types of nephron:

These are the nephrons present within the cortex. These are short and comprise about 80% of the total nephrons.

These have long loops of Henle and extend into the medulla. These are about 20%.

The primary function of nephron is removing all waste products including the solid wastes, and other excess water from the blood, converting blood into the urine, reabsorption, secretion, and excretion of numerous substances.

As the blood passes through the glomerulus with high pressure, the small molecules are moved into the glomerular capsules and travel through a winding series of tubules.

The blood surrounding the nephron travels back into the body through the renal blood vessels, which are free of toxins and other excess substances. The obtained ultrafiltrate is urine, which travels down via the collecting duct to the bladder, where it will be stored and released through the urethra.

Though excretion in human beings takes place through lungs, skin, liver, the kidneys are the main organs of the human excretory system. They are bean-shaped organs, which weigh between 150 to 170 gms and their length ranges from 4 – 5 inches long.

The kidneys are located in the retroperitoneal space in the abdominal cavity, just below the rib cage and present in the opposite direction or facing each other on both the left and right side of the body. The right kidney is slightly smaller and lower than the left kidney.

Compared to males, the total area, size and the weight of the kidneys are smaller in females. Therefore, both male and female should be careful during their kidney transplantation.

The major functions of the kidneys are to:

The functional unit of the kidney is the nephron. Each kidney consists of millions of nephron which plays a significant role in the filtration and purification of blood. The nephron is divided into two portions, namely, the glomerulus and the renal tubule and helps in the removal of excess waste from the body. 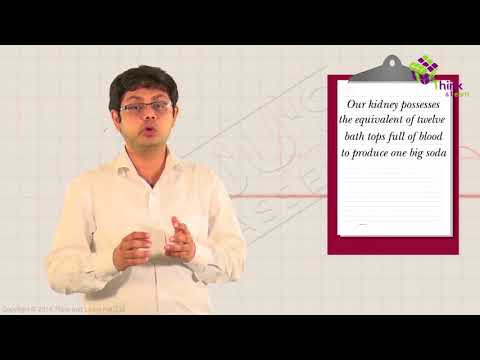 What is the main function of a nephron?

A nephron is the structural and functional unit of the kidney. It regulates the concentration of water and minerals such as sodium by filtering the blood and reabsorbing the important nutrients.

How does a nephron filter blood?

A nephron consists of a filter called glomerulus and a tubule. The glomerulus filters the fluid and waste products holding back the blood cells and large molecules, especially proteins.

What are the two main parts of a nephron structure?

The two main parts of a nephron structure include:

Where are the nephrons located?

What is the cup-shaped structure surrounding the renal corpuscle called?

The cup-shaped structure surrounding the renal corpuscle is known as the Bowman’s capsule or glomerulus that helps in blood filtration.

Test your Knowledge on Nephrons!
Q5