Transportation is an essential, natural and the physiological process which occurs in all the higher organisms including plants, animals, and humans. In order to sustain life, this process is important as it functions by constantly transporting, different essential materials to and from all parts of the body including cells, tissues, and organs.

The essential materials mainly include water, hormones, gases, mineral nutrition, organic material, etc.  The different means of transport in a living organism are:

Let us have a detailed overview of Active transport.

What is Active Transport?

During the process of active transport, a protein pump makes use of stored energy in the form of ATP, to move molecules

The below diagram shows the process of active transport, which uses an external energy ATP for the movement of the molecules. 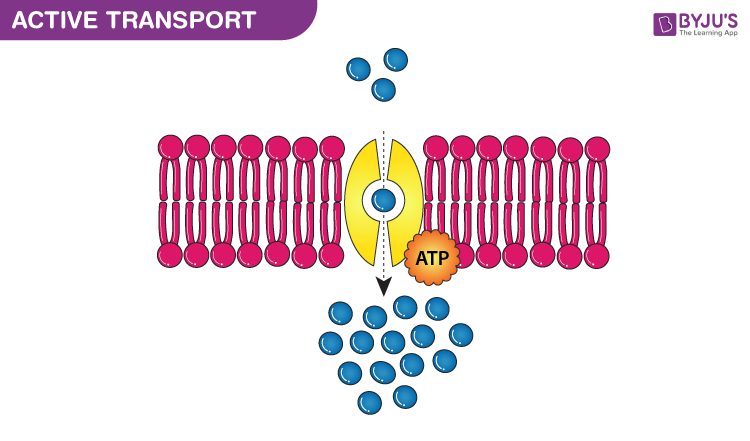 The uptake of glucose in the intestine of the human body and also the uptake of minerals or ions into the root hair cells of the plants are some of the examples of active transport.

In this process of transportation, the energy is utilized by the breakdown of the ATP – Adenosine triphosphate to transport molecules across the membrane against a concentration gradient. Therefore, all the groups of ATP powered pumps contain one or more binding sites for the ATP molecules, which are present on the cytosolic face of the membrane. Basically, the primary active transport uses external chemical energy such as the ATP.

Electrochemical gradient exists whenever there is a net difference in charges. The positive and negative charges of a cell are separated by a membrane, where the inside of the cell has extra negative charges than outside. The membrane potential of a cell is -40 to -80 millivolts.

Like humans and animals, plants also require transport systems which are mainly involved in the transport of materials, such as water, minerals, and necessary nutrients to all parts of the plant for its survival.

Some of the best examples of active transport include:

Also, read about the Passive Transport

Learn more about Active transport, its types, and other related topics @ BYJU’S Biology