Structure of the Eye

Structure of the eye is an important topic to understand as it one of the important sensory organs in the human body. It is mainly responsible for vision, differentiation of colour (the human eye can differentiate approximately 10 – 12 million colours) and maintaining the biological clock of the human body. The human eye can be compared to a camera as both works by gathering, focusing, and transmitting the light through the lens for creating an image of an object.

Human Eye Diagram: Contrary to popular belief, the eyes are not perfectly spherical; instead, it is made up of two separate segments fused together.

Explore: Facts About The Eye

To understand more in detail about our eye and how our eye functions, we need to look into the structure of the human eye.

Structure and Functions of the Human Eye

The human eyes are the most complicated sense organs in the human body. From the muscles and tissues to nerves and blood vessels, every part of the human eye is responsible for a certain action. Furthermore, contrary to popular belief, the eye is not perfectly spherical; instead, it is two separate segments fused together. It is made up of several muscles and tissues that come together to form a roughly spherical structure. From an anatomical perspective, the human eye can be broadly classified into the external structure and internal structure.

The External Structure of an Eye

The parts of the eye that are visible externally include the following:-

Sclera: It is a white visible portion. It is made up of dense connective tissue and protects the inner parts.

Conjunctiva: It lines the sclera and made up of stratified squamous epithelium. It keeps our eyes moist and clear and provides lubrication by secreting mucus and tears.

Cornea: It is the transparent, anterior or front part of our eye, which covers the pupil and the iris. The main function is to refract the light along with the lens.

Iris: It is the pigmented, coloured portion of the eye, visible externally. The main function of the iris is to control the diameter of the pupil according to the light source.

Pupil: It is the small aperture located in the centre of the Iris. It allows light to enter and focus on the retina.

The Internal Structure of an Eye

The internal components of an eye are:

Lens: It is a transparent, biconvex, lens of an eye. The lens is attached to the ciliary body by ligaments. The lens along with cornea refracts light so that it focuses on the retina.

Retina: It is the innermost layer of the eye. It is light sensitive and acts as a film of a camera. Three layers of neural cells are present in them, they are ganglion, bipolar and photoreceptor cells. It converts the image into electrical nerve impulses for the visual perception by the brain.

Optic nerve: It is located at the posterior portion of the eyes. The optic nerves carry all the nerve impulses from the retina to the human brain for perception.

Aqueous Humour: It is a watery fluid present between the cornea and the lens. It nourishes the eye and keeps it inflated.

Vitreous Humour: it is a transparent, jelly-like substance present between the lens and the retina. It contains water (99%), collage, proteins, etc. The main function of vitreous humour is to protect eyes and maintain its spherical shape. 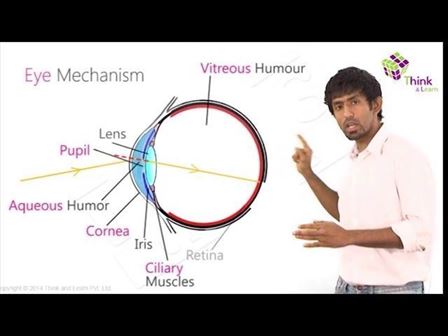 Structure of the Eye explained in detail

Explore more about Structure of Eye and its functions or discover other related topics at BYJU’S Biology.

Briefly explain the structure of the human eye.

The human eye is a roughly spherical organ, responsible for perceiving visual stimuli. It is enclosed within the eye sockets in the skull and is anchored down by muscles within the sockets.
Anatomically, the eye comprises two components fused into one; hence, it does not possess a perfect spherical shape. External components include structures which can be seen on the exterior of the eye, and internal components include structures present within.

What are the external structures of the eye?

The external structures of the eye include:

What is the function of conjunctiva?

Conjunctiva lubricates the front surface of the eye. It also protects the eyes from debris, dust and infection-causing microorganisms.

What is the function of the iris? How many layers does it have?

The iris regulates the amount of light entering the eyes by controlling the diameter and size of the pupil.
The iris consists of two layers:

What are the internal components of the eye?

What are the internal components of the eye?

The internal components of the eye include: