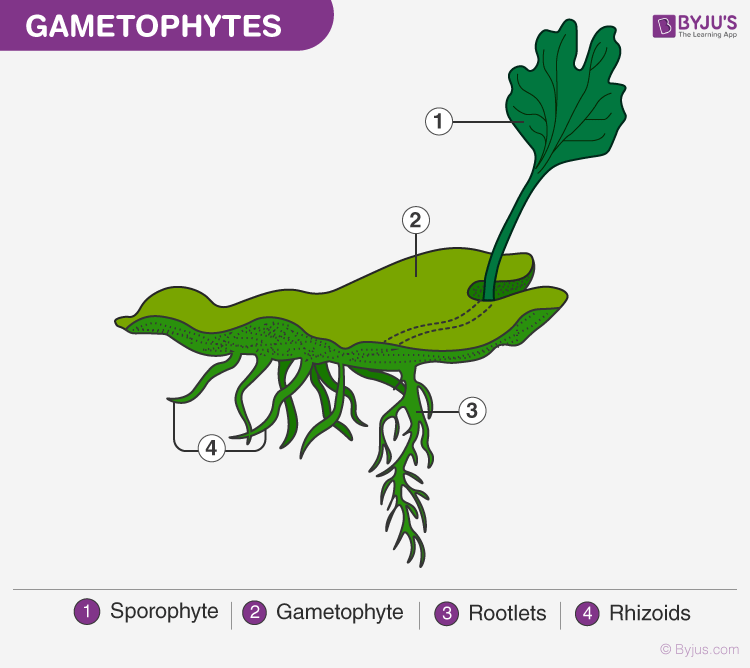 The primary job of gametophyte is the production of Gametes. The produced gametes are the haploid reproductive cells, such as sperm and eggs.

There are two types of reproductive organs found in a gametophyte:

Archegonium: A multicellular sex organ in the female that creates eggs. It is like an ovary in females because both structures form haploid cells of the egg.

Antheridium: A Multicellular sex organ in the male that produces sperm.  An antheridium is just like a testis in human males because both generate haploid sperm cells.

Both antheridia and archegonia are normally microscopic structures.

A cell is said to be haploid if it possesses only one set of chromosomes. Haploid can also be used to refer to the number of chromosomes in the gametes which can either be eggs in females or sperm cells in males.

The gametes in humans are haploid as they contain 23 chromosomes. Each of this chromosome exists in a pair which are present in diploid cells. The chromosome number that is present in a single set can be represented as ‘n’, where ‘n’ is also known as the haploid number. In the case of humans, n=23.

Gametes possess half of the chromosomes that are present in normal diploid cells of the body. These diploid cells are referred to as somatic cells.

During meiosis, haploid gametes are produced. It is a kind of cell division wherein the number of chromosomes is reduced in the parent diploid cell by half in number. Some entities such as algae contain haploid sections in their life cycle. Other entities such as male ants exist as haploid entities all through their life span.

The female gametophyte of gymnosperms is a large and multicellular structure that serves the double function of supporting the gametes as well as nurturing the growing embryo which is in contrast to the state in angiosperms, wherein female gametophyte is minute and typically eight-nucleated with a single operational gamete.

The female gametophytes are responsible for the formation of female gametes and produce the molecular and physical basis for fertilization and origination of the seed development. These minuscule formations make up for the central hub for plant reproduction that depends on the molecular processes for its growth and development. It is not only sustained by gene functions but by cellular functions as well that are encoded by accessory cells which can turn active genetically if there is a failure in the gametes.

The whole process of female gametophyte development occurs in two different phases. The first phase involves the megasporogenesis, where a single diploid mother cell undergoes meiosis to form haploid megaspore tetrad out of which only one will survive and other three disintegrate. The functional megaspore grows into an embryo sac.

Megagametogenesis is the second phase where the functional haploid megaspore undergoes mitosis to generate 7-celled, 8-nucleate gametophyte known as embryo sac. Out of the eight nuclei, polar nuclei move to the centre and fuse to produce a single diploid cell at the centre. This is the cell which fuses with the sperm to produce triploid endosperm. Three of the nuclei develop into antipodal cells and two will transform into synergid cells which eventually disintegrate.

The first gametophytic structure is the modification of microspore mother cell into the pollen grain. The pollen grain grows into the male gametophyte on germination which is initiated before pollination takes place.

The pollen grains consist of two cells- a vegetative cell and a generative cell. Once the microsporangium is matured it bursts and releases the pollen from the anther.

Male gametophyte development can be classified into two stages:

Pollen grains display germination that is initiated in pollen sac which is referred to as precocious germination wherein a large central vacuole formation causes the nucleus to be pushed to one side post which the nucleus goes through mitosis that gives rise to two daughter nuclei.

The nuclei of the vegetative and generative cell travel to the pollen tube. The generative cell at this stage divides to produce two haploids, the non-motile and unicellular male gametes. For the deeper insertion of the tube, the size of the developed male gametophyte is diminished and derives the nutrition from the style’s tissues.

Following are the important examples of gametophytes:

The hornwort gametophyte is green, long-lived and low to the ground, while the sporophyte is a thin, long stalk from which the spores are released.

All plants reproduce both sexually and asexually due to variation in generations.

Gametophytes and sporophytes consisting of genetic elements of the plant species. Some of the complex vascular plants spend more time as sporophytes, while mosses are not the same. The noticeable part of the plant is visible and is the gametophyte stage of these species.

There is only one copy of every chromosome in Haploid gametophytes in their every cell; this is the reason why this life phase must produce asexually. Eventually, gametophytes create gametes that combine to produce a diploid zygote and grows into the sporophyte.

Diploid sporophytes consist of two copies of every chromosome, hence it is able to support meiosis to produce haploid spores that grow into gametophytes, and brings the alternation of generations.

Difference Between Gametophyte And Sporophyte

Though the stages are common in different plant groups, their level of complexity and status across various groups is different.

Following are the differences between both stages:

To know more about Gametophyte and other related topics, keep visiting BYJU’S website or download BYJU’S app for further reference.

What is a sporophyte?

The sporophyte is the diploid phase in the plant life cycle that develops from the zygote. Sporophytes give rise to spores from which the gametophytes arise.

How does a male gametophyte develop?

The pollen grains are released from the pollen-sacs at the two-celled stage. The generative cell further divides to form two male gametes. These male gametes are released into the embryo sac to undergo fusion with the egg and the central cell.

What is a female gametophyte?

How is a gametophyte different from sporophyte?

What are the two different types of gametophytes?

What is the difference between gametophytes and gametangia?

Gametophytes are haploid multi-cellular organisms. On reaching maturity, the gametophyte produces one or more gametangia. these are the organs that produce haploid gametes.

Write a few examples of gametophytes.

Mosses and hornwort are some of the examples of gametophytes.

Test your Knowledge on Gametophyte!
Q5