As stated above, hormones are chemicals that essentially function as messengers of the body. These chemicals are secreted by special glands known as the endocrine glands. These endocrine glands are distributed throughout the body. These messengers control many physiological functions as well as psychological health. They are also quite important in maintaining homeostasis in the body.

The effects of hormones depend on how they are released. Hence, signalling effects can be classified into the following:

To regulate various functions, different types of hormones are produced in the body. They are classified as follows:

Peptide hormones are composed of amino acids and are soluble in water. Peptide hormones are unable to pass through the cell membrane as it contains a phospholipid bilayer that stops any fat-insoluble molecules from diffusing into the cell. Insulin is an important peptide hormone produced by the pancreas.

Unlike peptide hormones, steroid hormones are fat-soluble and are able to pass through a cell membrane. Sex hormones such as testosterone, estrogen and progesterone are examples of steroid hormones.

Endocrine Glands and the Hormones Secreted

As stated before, hormones are released by the endocrine glands. These are different from other glands of the human body as they are ductless. 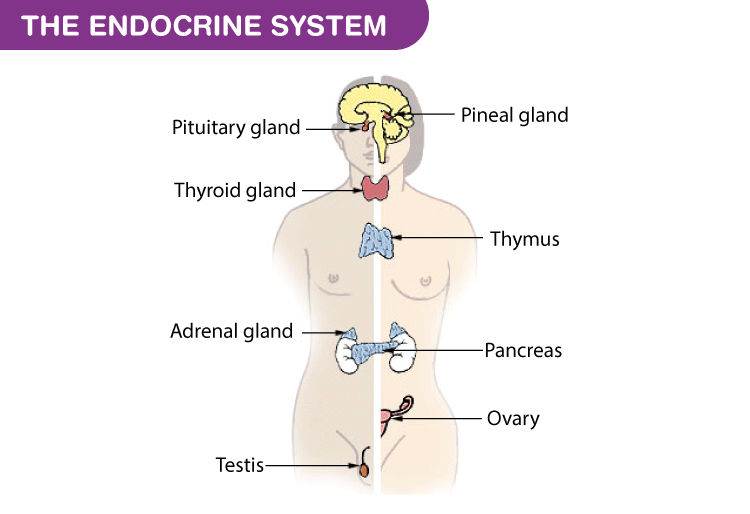 All these glands work together to produce and manage the hormones of the body.

Following are some important functions of hormones:

Several hormonal diseases occur when there is a malfunctioning of the endocrine glands. Common hormonal issues are associated with hypothalamus, adrenal and pituitary glands. An increase or decrease in the secretion of these hormones can severely affect growth, metabolism and development.

Diseases such as hyperthyroidism, osteoporosis, and diabetes are caused due to hormonal imbalance. The factors responsible for hormonal diseases can be genetic, environmental, or related to diet.

Why are Hormones called Chemical Messengers?

Sometimes, hormones act more than a regulator than a messenger. The changes in the level of hormone production lead to certain changes in the body. Thus, hormone as a regulator maintains the homeostasis of the body. Once the hormones meet their target, their production needs to be controlled and this is attained by a mechanism called feedback control mechanism. The feedback mechanism could either be positive or negative. 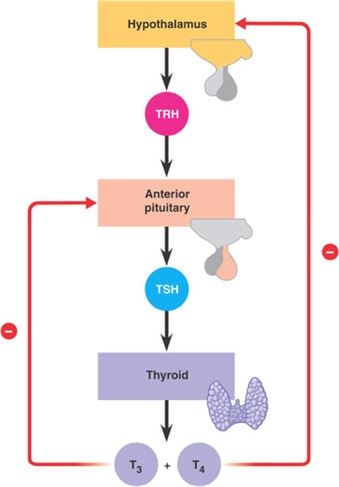 The thyroid gland produces a hormone called thyroxine, and its secretion is controlled by the Thyrotropin Releasing Hormone (TRH) from the hypothalamus and the Thyroid Stimulating Hormone (TSH) from the anterior pituitary.

When the level of thyroxine in the blood reduces, the hypothalamus stimulates the thyroxine secretion by stimulating TSH secretion. This represents a positive feedback mechanism.

Hormones are meant for their target tissues for specific functions. As soon as they meet their target, they are removed. This is mainly done by the liver, kidney and other organs.

Learn more in detail about what are hormones, different types of hormones, their functions and other related topics at BYJU’S Biology.

Hormones are the chemicals that are responsible for controlling and regulating the activities of certain cells and organs. These hormones are secreted by ductless glands known as endocrine glands.

3. What are hormones made of?

Hormones are made of either proteins or steroids.

4. Name the hormone produced by the adrenal glands.

The hormone released by the adrenal glands is called Epinephrine. It is also called adrenaline.

5. Name the hormone produced by the pineal gland.

The hormone produced by the pineal gland is Melatonin. It regulates the body’s sleep cycle.

6. Which are the hormones produced by the thyroid gland?

The thyroid gland is responsible for producing thyroxine, triiodothyronine, and calcitonin.

In males, testosterone is produced by the testes while ovaries produce the same hormone in females.

Progesterone is produced by the ovaries.

9. Name the hormone responsible for Gigantism.

The hormone responsible for gigantism is growth hormones, which are released by the pituitary gland.

Acromegaly is the result of excess production of the growth hormone by the pituitary gland, commonly as a result of a benign tumour.
Test your Knowledge on Hormones
Q5