We know the nervous system and the endocrine system are the two controlling systems of the body. The endocrine system controls the body with the help of hormones they release. These hormones bind with specific receptors on target cells which further proceed to trigger intracellular signals either by altering membrane permeability, acting through second messenger system or activating specific genes to form new proteins.

To better understand the mechanism of hormone action, it is crucial to comprehend various definitions.

A Hormone is a tiny chemical messenger, travelling along with the bloodstream. It exists to maintain internal balance or in other words, keeps the human body in a state of homeostasis.

This is an extremely rudimentary definition of hormones, as in reality there are numerous hormones that perform an immense number of functions for various purposes.

Starting with receptors, they are specific for every hormone. Their sensitivity and responsiveness are dependent on both, the number of receptors and its affinity.  Also, the site of the receptor might be:

Furthermore, hormones can be divided into groups on the basis of their chemical nature:

On the other hand, hormones which interact with intracellular receptors mostly regulate gene expression or chromosome function by the interaction of hormone receptor complex with the genome. The sum total of all the biochemical actions results in physiological and developmental effects.

The mechanism of hormone action is grouped into two classes:

This type of mechanism is shown by the water-soluble hormones that are amines or proteins in composition such as the growth hormone, oxytocin, ADH, etc.

These hormones can’t pass through the lipid membrane. They have their target receptor on the cell membrane to which the hormone binds.

When the hormone binds on the specific target receptor, the enzyme adenyl cyclase in the cell membrane is activated. This helps in the production of cyclic AMP (cAMP).

cAMP acts as the secondary messenger. It diffuses through the cell membrane and activates several enzymatic reactions to cause biochemical changes.

The target cell responds to these changes and cAMP is deactivated by the enzyme phosphodiesterase.

This type of mechanism is shown by lipid soluble hormones such as fatty acids and steroids that can easily pass through the plasma membrane.

They possess intracellular receptors. The hormones bind to the target receptor that activates the enzymatic activity of the cell to bring about biochemical changes.

Transcription of DNA is initiated by the hormone-receptor complex.

The mRNA is translated into protein. This protein causes biochemical changes inside the cell. 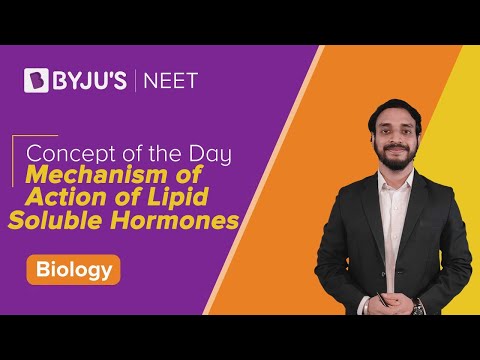 Hormones help in maintaining the internal environment of the body. When the secretion of hormones is under the control of other hormones, it is known as feedback control. It can be of two types:

The neurosecretory cells of the hypothalamus secrete hormones known as neurohormones into the blood. These neurohormones are carried to the pituitary gland and stimulate it to release various hormones. hence they are also known as “releasing factors”.

Test your knowledge on Mechanism Of Hormone Action
Q5