What is an Amino acid?

“Amino Acids are the organic compounds that combine to form proteins, hence they are referred to as the building components of proteins. These biomolecules are involved in several biological and chemical functions in a human body and are the necessary ingredients for the growth and development of human beings. There are about 300 amino acids that occur in nature.”

Listed below are the names of twenty amino acids along with their chemical formula.

Out of 20 amino acids, our body can easily synthesize a few on its own and are called non-essential amino acids. They include alanine, asparagine, arginine, aspartic acid, glutamic acid, cysteine, glutamine, proline, glycine, serine, and tyrosine.

Apart from these, there are other nine amino acids, which are very much essential as they cannot be synthesized by our body. They are called as essential amino acids, and they include Isoleucine, histidine, lysine, leucine, phenylalanine, tryptophan, methionine, threonine, and valine.

The general structure of Amino acids is H2NCH RCOOH, and it can be written as:

There are 20 naturally occurring amino acids and all have common structural features – an amino group (-NH3+), a carboxylate (-COO-) group and a hydrogen-bonded to the same carbon atom. They differ from each other in their side-chain called R group. Each amino acid has 4 different groups attached to α- carbon.

Structure of 20 Amino acids with their chemical formula

Here is the structure of twenty amino acids with their chemical formula. 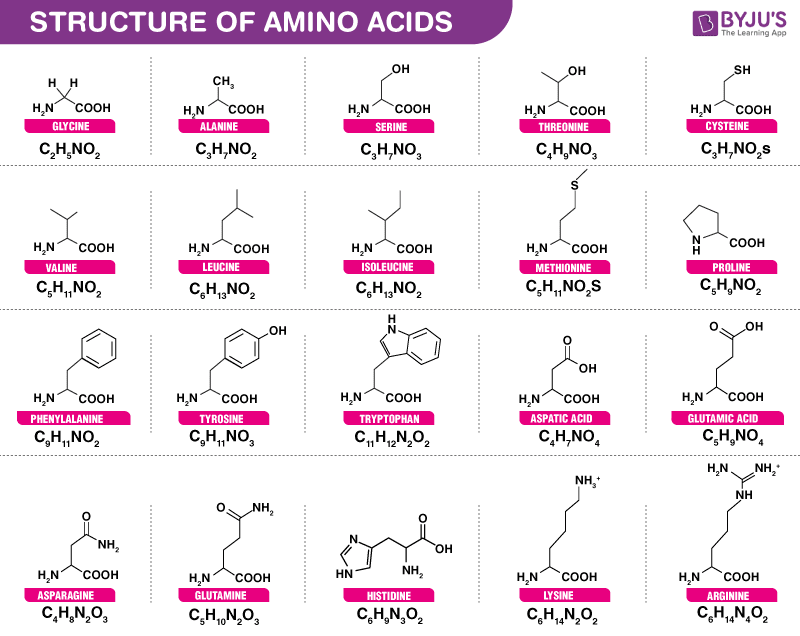 Amino acids play an important role in performing several biological and chemical functions in different parts of our body, including building and repairing the tissues, the formation and function of enzymes, food digestion, the transportation of molecules, etc. Our body can synthesize only certain amino acids and the rest of the amino acids which are called essential amino acids should be supplied through protein-rich foods in our daily diet.

As mentioned above, amino acids are the building blocks of proteins and proteins play a fundamental role in almost all life processes. Therefore, it is necessary to include all nine essential amino acids in our daily diet to maintain a healthy and proper function of our body. The deficiency of amino acids may include different pathological disorders, including:

Stay tuned with BYJU’S to learn more about amino acids, their functions and other Biomolecules at BYJU’S Biology.

Give examples of essential amino acids.

Why are amino acids called amphoteric?

Amino acids have both acidic and basic properties. This is why they are amphoteric. The predominant form of the amino acid is based on the pH of the solution.

Give an example of a transport protein and mention its function.

Haemoglobin is a transport protein. It is involved in the transportation of oxygen to the cells.